Space for dissent opened in Afghanistan after the Taliban were ousted 20 years ago, but militants are trying to slam it shut

by
Susannah George and Ezzatullah Mehrdad
• The Washington Post • September 12, 2021 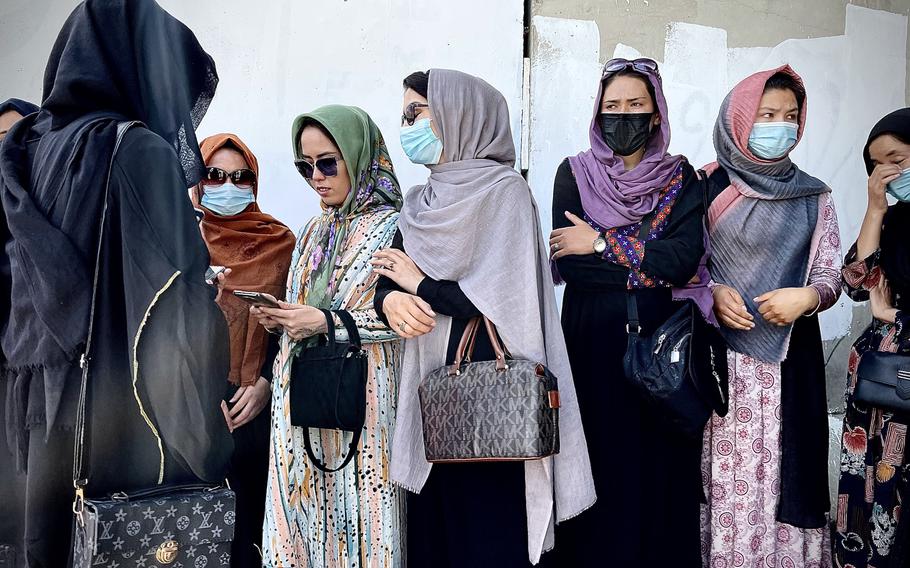 Female protesters gather in downtown Kabul after a brutal Taliban crackdown on demonstrations. After reports that many of the other women who planned to join them had already been detained or beaten by Taliban fighters, the women debated whether to push forward on their own. (Susannah George/The Washington Post)

KABUL, Afghanistan — The messages poured in as Ramzia Abdekhil inched toward central Kabul in halting traffic.

“One of our groups was arrested.”

Then a call for help: “The Taliban have surrounded us, we are trapped.”

Her back still throbbing from the beating she had received just days before, Abdekhil’s face tensed as she and her sister compared reports from across Kabul on Wednesday. They had planned to join a group gathering at a central roundabout and march against the Taliban’s announcement of an all-male cabinet.

But the militant group had just declared protests illegal the night before and deployed additional fighters to the city’s streets, with orders to arrest violators. The protesters’ plans were quickly unraveling.

“Go home? No, now it’s even more important we speak out,” Abdekhil said, without looking up, texting similar messages of encouragement to the other women in her group. “Our voices are a threat to them. That’s why they said protesting is illegal. But all we want is our rights.”

The 22-year-old is just one of tens of thousands of urban Afghans who had until recently spent their adult lives in a country propped up by Western forces, surrounded by the liberal rhetoric that came alongside two decades of war. While the billions of dollars spent on the country’s security forces and government vanished with the Taliban takeover, this generation of young Afghans determined to live in a more tolerant society could be one of the few enduring legacies of foreign intervention and investment here.

But after days of violent Taliban crackdowns, and a ban on demonstrations by the militants, it’s unclear if the protest movement will continue in its current form. Protesters say they are determined to keep fighting, but after a wave of brutal Taliban attacks against demonstrators and journalists last week, activists have gone underground.

“I first learned about women’s right from the Koran,” Abdekhil said, “but when the United States was here we learned more about our rights in society, about protest and the power of raising our voices.”

About a dozen other women were already at the meeting place in central Kabul when Abdekhil arrived Wednesday. They greeted each other warmly and quickly began sharing sobering news of friends arrested or injured. Mariam Hashimi, 25, sits down in shock after learning a group of friends making their way to central Kabul was arrested by the Taliban. Hashimi, who has attended many protests under Taliban rule, says the militant crackdown on Sept. 8, 2021, was the harshest she's seen since the group overran the Afghan capital. (Susannah George/The Washington Post)

Nearly every woman in the small group had a story to tell of a close call at a recent protest. The previous week, just a few blocks from where they stood, a group of Taliban fighters began shooting in the air in an attempt to disperse the crowd.

“At that moment I was scared,” Abdekhil said. “I heard one of the commanders tell his fighters to shoot us, but I just remembered the story of Malala Yousafzai. That encouraged me to continue, to be ready to pay that cost for our freedom.”

Others in the crowd began to fume as more reports of Taliban violence pinged on their phones. Taliban fighters lined the street where the women had gathered, and without reinforcements they almost certainly faced arrest if they went through with the protest on their own.

“The United States should have just dropped a nuclear bomb on Afghanistan when it left, instead of letting us die slowly,” yelled one of the women, Rashmeen, her hands shaking. She spoke on the condition that she be identified only by her first name, for fear of reprisals.

But Abdekhil said she views the U.S. legacy as more complex. She is thankful for her education at schools for women that didn’t exist before the Taliban were overthrown after the Sept. 11, 2001, attacks, and for what she learned from seminars on women’s rights and civil activism funded by international aid.

But after the U.S. withdrawal, she said she can’t help feeling abandoned, almost set up to fail after being promised so much.

Zafarudin Nawrozi, 28, joined Afghan women on the capital’s streets to speak out against Taliban rule in recent weeks. He said he has been protesting in Kabul for over six years.

“I did not hesitate to run into the street for justice, for the right cause,” he said of taking part in demonstrations under the previous government. The public lynching of Farkhunda Malikzada in 2015 first drove him to protest. Malikzada, a 27-year-old woman, was attacked and killed by a mob after a rumor spread that she had desecrated a Koran.

But after the Taliban takeover, he said, everything changed.

“It was like falling,” he said, describing his sudden loss of hope for the future.

Over the past week, he has continued to protest Taliban rule, marching in the streets and chanting, “Freedom, freedom.” But now Nawrozi said he feels suffocated by the crowds and crippled by fear.

“These Taliban fighters are like zombies,” he said. “You do not want to face them.”

Karima Shujazada, 26, said that under Taliban rule, when she goes out to protest she knows she is risking her life, something she never felt during the previous government.

“Protesting and advocating had turned into a hobby and fun activity” under Afghanistan’s previous government, she said. “In the past, I was sure that I would return home safely. Now, when I go out to protest, I don’t know if I will get detained, beaten up or killed.”

A member of the Sadat ethnic minority in Afghanistan, Shujazada said it was her family who taught her to fight for equality. “My father used to tell me to never tolerate anyone disrespecting your rights.”

So after seeing women rally against Taliban rule in Kabul and Herat, she organized a similar protest in Mazar-e Sharif.

The night before, she created a Facebook group and posted a call to demonstrate. Without money to print banners, her sister-in-law wrote slogans on flip charts: “A city with one gender stinks,” “I don’t wear a burqa” and “We want political participation at all levels.”

Filled with fear and horror, Shujazada and dozens of women gathered outside the mayor’s office on Monday. Initially, a Taliban official was receptive but ultimately fighters broke up the demonstration by driving their pickup trucks through the crowd.

Shujazada has since gone into hiding, fleeing her home and changing her phone number. She said she’s determined to protest again: “I have nothing to lose. I can’t study and can’t work. It’s better to die on the street protesting than just staying at home.” Rohullah Raziqi sits in front of a wall of photos of inspirational figures at a cafe run by a friend that also serves as an art space and bookstore where activists have been gathering before setting out for protests. Raziqi says the Taliban forced the cafe's owners to take down photos of women, leaving only men's photos on the wall. (Susannah George/The Washington Post)

In Kabul, Rohullah Raziqi and his friends prepared for protests on Tuesday in a brightly decorated cafe that also serves as a cultural center, bookstore and art studio. The courtyard is also where they retreat after violent crackdowns.

“Two of my friends were arrested,” Raziqi said, pointing to the door they came though hours later, after they were released. “Their bodies were covered with signs of torture, long red marks on their backs from lashings.”

The 29-year-old is a local journalist, but after Kabul fell he decided to join the protests rather than cover them.

“The Taliban call us the ‘American generation,’ and they try to say we are not Muslims because we have been influenced by Western thoughts,” he said. “But it’s not true. I just believe in freedom.”

After the Taliban banned protests last week and filled Kabul’s streets with additional fighters, many activists, including Raziqi, stayed home to regroup.

But Mohammed Nasir Jahanzib, 29, insisted the pause was only temporary.

“I’ll never forget what my rights are,” he said. “I’ll never stop. Even if they continue preventing us from protesting, I’ll do the same thing, but with my pen and my thoughts.”

Jahanzib partially credits his dedication to civil liberties to foreign intervention in Afghanistan, but describes mixed feelings about the last two decades.

“If the United States had not come to Afghanistan, I would have probably become a mullah or a Talib,” he said with a dark laugh. Female protesters compare messages from other groups marching in the Afghan capital as they decide how to move forward. (Susannah George/The Washington Post)

Jahanzib grew up in Ghowr province and doesn’t remember hearing anyone talk about human rights until after high school, when he began working for the provincial council and volunteering for a local youth organization.

He said he’s thankful for the foreign presence in Afghanistan because it made it possible for him to get a secular education. But he faults the withdrawal of those same forces for not leaving behind a government strong enough to protect a secular society.

At a recent protest, Taliban fighters hit his right shoulder hard with the butt of his rifle.

“For one day, I could barely use my arm,” he said. “I couldn’t write or hold a glass of tea.” Since then his wounds have healed and he said he remains undeterred from protesting in the future. But he’s skeptical the rallies will produce real change unless they force other countries to put pressure on the Taliban.

“Knowing our rights is not enough if we don’t have power in our hands,” he said. “As everyone knows today, it’s the Taliban who has the power.”