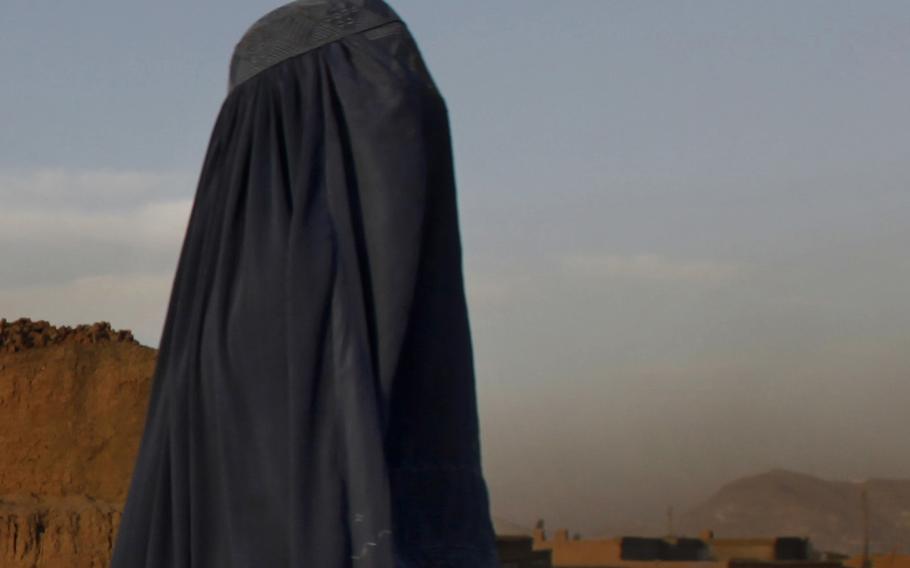 An Afghan woman in a burka walks through a suburb of Kabul, Afghanistan, on Sept. 25, 2010. On Saturday, Sept. 11, 2021, women in full face veils rallied in support of the Taliban and its policies of gender segregation, a demonstration that was flanked by Taliban fighters carrying machine guns and rifles. (Gemunu Amarasinghe/AP)

The Taliban on Saturday repeated a call for civil servants to return to work - but not the thousands of women who served before the Islamist militants' takeover and have been sent home from their offices and left in limbo.

Also Saturday - the 20th anniversary of the 9/11 attacks - women in full face veils rallied in support of the Taliban and its policies of gender segregation, a demonstration that was flanked by Taliban fighters carrying machine guns and rifles. Protests that do not have the Taliban's approval have been banned.

The scenes stood in stark contrast to the violent suppression of women's right protests earlier in the week. They also underscore the unraveling of the greater liberties and rights that took root during the two-decade war led by the United States.

The northern Panjshir region, the last holdout province resisting Taliban rule, has been subjected to an increasing campaign of terror and fear, as allegations of rights abuses grow.

One civil servant, who spoke to The Washington Post Saturday on the condition of anonymity fearing backlash from the Taliban, said she visited her office several days ago but was told to return home by an armed Taliban guard outside her office. She has not heard anything on her salary, either, as officials told her "no decision" has been made as yet. Only women in the health care and education sector have been allowed to return to their jobs since the Taliban took over the government.

The Taliban has not officially commented on the status of female civil servants.

Women have been at the forefront of protests in recent days, demonstrating against the Taliban's decision not to include any women in the caretaker government. The interim cabinet also includes members of the Haqqani network, which is labeled a terrorist group in the United States. The State Department said earlier that it was "assessing" the announcement of the cabinet, "concerned by the affiliations and track records of some of the individuals."

On Saturday, the Taliban permitted a protest by women in support of its policies, who sat in a Kabul university lecture theater in full face veils before taking to the street. The demonstration involved some 300 women, who held printed banners saying they support the Taliban and said were against coeducation.

"We are against those women who are protesting on the streets, claiming they are representative of women," said one speaker at the pro-Taliban protest, according to the AFP news agency. The last government was "misusing women," she said.

Clashes have meanwhile continued in the rebellious Panjshir province, which Taliban militants said they captured this week. Residents say there is an acute shortage of food, medicine and other basic supplies in the valley, and have also carried out extrajudicial killings of civilians, according to witnesses. The Taliban has denied these reports.

A 52-year-old women who recently fled the province described the clashes there as the "worst time" for her and her family.

"We could hear gunshots and shouting in the streets, and the Taliban was going from house-to-house to search for resistance fighters and weapons," she said, speaking on a condition of anonymity citing the security situation. Taliban fighters knocked on her door, asking for people connected to the former government and military, she said, though her family had not supported either side of the conflict.

Others who recently left said they had to pass some half dozen checkpoints before reaching Kabul, all guarded by armed Taliban fighters. A resident of Kabul, who went to the Panjshir valley to help family members get out of the area, said he was told by Taliban officials to delete any photos and videos he took there.

The United Nations' human rights office said Friday that it was growing concerned over "an increasingly violent response" by the Taliban to protests, including the use of "live ammunition, batons and whips."