With bounties on their heads and branded as terrorists, Haqqanis now hold power in Taliban government 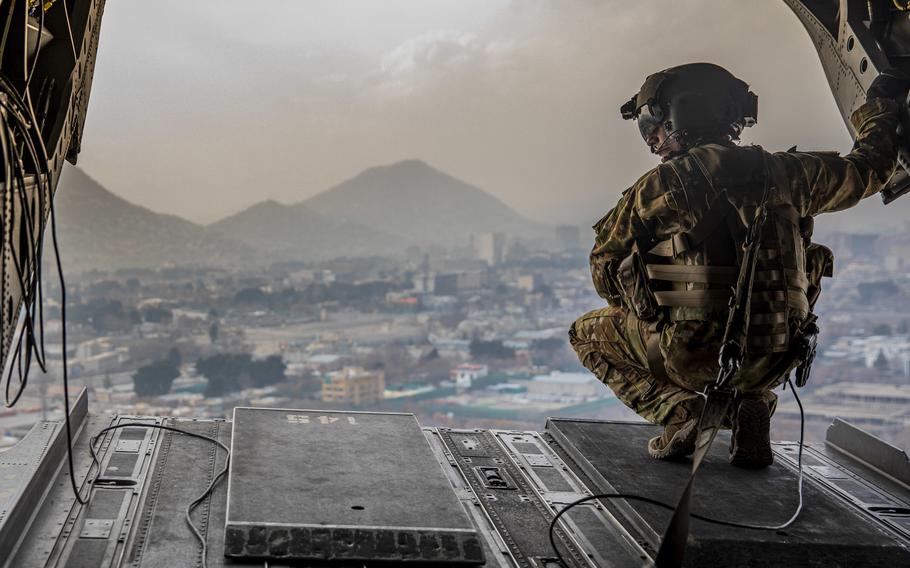 A U.S. soldier crouches at the back of a CH-47 Chinook during a flight over Kabul, Afghanistan on March 3, 2020. For years, there have been bounties on members of the Haqqani network, which the United States has branded as terrorists. Now they're in power in Kabul, after the Taliban took over in August 2021. (Jeffery Harris/U.S. Army )

DOHA, Qatar — Twenty years after al-Qaida attacked the United States — a plot hatched in Afghanistan — its loyalists hold senior positions in the Taliban's new transitional government. There is one name that stands out: Haqqani.

A U.N. report in June described the Haqqani network as the "primary liaison between the Taliban and Al-Qaida." Its leader, Sirajuddin Haqqani — a brutal insurgent commander known for dispatching suicide bombers who've killed or maimed hundreds of civilians — was "assessed to be a member of the wider Al-Qaida leadership, but not of the Al-Qaida core leadership."

He is also in charge of combating terrorism.

"It's a major concern," said Colin P. Clarke, director of policy and research at The Soufan Group, an intelligence and security consulting firm. "You are one step removed from having the group that attacked us on 9/11 running the country."

The appointment of Haqqani, as well as relatives and members of his network, underscores his immense influence inside the Taliban. It also raises concerns that the new government will pursue a hard line agenda, even as Taliban leaders publicly claim to be gentler and more moderate than their brutal image in an effort to curry favor with donors and foreign governments.

Haqqani's political rise puts the Biden administration and other Western governments in a precarious position, particularly in countering terrorist threats. They are forced to have relationships with people they have sanctioned, many with bounties on their heads, for committing or sponsoring terrorism — or targeting Americans. In the interim government, at least 14 of the 33 cabinet members are on U.N. sanctions lists.

A Taliban spokesman did not immediately respond to questions about the Haqqani's alleged al-Qaida ties and concerns it could complicate much-needed relationships with foreign governments, the United Nations and international donors.

Sirajuddin Haqqani is on the FBI's most wanted list with a $5 million reward for information leading to his arrest. The State Department, through its Rewards For Justice Program, is offering $10 million, describing him as "a specially designated global terrorist."

He is wanted for "questioning in connection with" a January 2008 attack on a Kabul hotel that killed six people, including a U.S. citizen. He is also believed to have orchestrated attacks against U.S. and coalition forces and in planning an assassination attempt of former Afghan president Hamid Karzai, the State Department says.

Khalil Haqqani, the uncle of Sirajuddin, is the acting Taliban minister for refugees. The State Department is offering up to $5 million for his capture, in part because he "acted on behalf of al-Qaida and has been linked to al-Qaida terrorist operations."

In 2012, the United States designated the Haqqani network as a foreign terrorist organization.

Secretary of State of Antony Blinken told reporters at Ramstein Airbase in Germany on Wednesday that the Taliban interim government "does not meet the test of inclusivity and it includes people who have very challenging track records."

On Thursday, the Taliban demanded that the United States and the United Nations remove the Haqqanis and other cabinet members from their "blacklists," declaring that they violated the agreements of a peace deal signed in Doha. The movement also criticized Pentagon officials for noting that the Haqqanis were still targets.

"That America and other countries are making such provocative statements and trying to meddle the internal affairs of Afghanistan, the Islamic Emirate condemns it in the strongest terms," the Taliban said in a statement. "Such remarks by U.S. officials are a repetition of past failed experiments and such positions are detrimental for America."

"It's a pretty difficult spot for the Biden administration," Clarke said. "If you deal with the Taliban in these confines, you are essentially dealing with a terrorist group or members of a terrorist organization. And if you don't, you have no leverage and no influence to control events in Afghanistan."

The Haqqanis trace their roots to the Soviet Cold War occupation of the 1980s and the Afghan mujahideen struggle to liberate their nation. Sirajuddin's father, Jalaluddin, was a famed commander and CIA asset who forged a close alliance with Osama bin Laden and other foreign Islamist militants who arrived to push the Soviet troops out of Afghanistan.

In 1996, the elder Haqqani aligned with the Taliban, helping the movement seize the country for the first time. He served as a cabinet minister and a provincial governor. When the Taliban was toppled in 2001 following the September 11th attacks, the Haqqanis became an integral part of the insurgency against U.S.-led NATO forces.

In 2018, the Taliban announced the death of Jalaluddin due to an undisclosed illness. By then, Sirajuddin was already in charge of the Haqqani network, which was based in eastern Afghanistan as well as in bases inside Pakistan's Northwest Territories; three years earlier the Taliban had appointed him as a deputy leader.

The Haqqanis became known as "the most lethal and sophisticated insurgent group targeting US, Coalition and Afghans forces," often attacking with small-arms, rocket, suicide bombers and bomb-laden vehicles, according to the National Counterterrorism Center.

The network orchestrated some of the highest-profile attacks in the past two decades of war. This included a June 2011 assault on Kabul's Intercontinental hotel, two suicide bombings against the Indian embassy and a day-long assault on the U.S. Embassy and other high profile targets in Kabul a decade ago.

"People must be both reassured and terrified by the fact that an entity seen as responsible for some of the worst crimes of the war is now in charge of securing the population," said Ashley Jackson, an expert on the Taliban at the Overseas Development Institute. "But there is a certain logic from inside the Taliban . . . if anyone can bring security, one assumes it's the Haqqani network."

But that could also pose a threat to Sirajuddin Haqqani's influence inside the movement, where he has several rivals, including Mohammad Yaqoob, the acting defense minister and son of the Taliban's late founder Mohammad Omar.

One of Haqqani's primary challenges will be to prevent large-scale bombings by the Islamic State and other militant groups that are against the Taliban - like the attack on Kabul's airport last month that killed 13 U.S. service members and more than 170 Afghans.

"Since he's number one now, it's his responsibility to prevent these urban attacks," said Vanda Felbab-Brown, director of the Initiative on Nonstate Armed Actors at the Brookings Institution. "If he doesn't, there's going to be people unhappy, including within the Taliban. They will say 'you have this important portfolio, what the hell are you doing?'"

Haqqani has also shown he can think strategically off the battlefield. Last year, he shared his visions in an op-ed in the New York Times with the headline: "What We, the Taliban, Want." Many analysts viewed it as a shrewd tactical move to soothe the concerns of the United States and the international community following the withdrawal of U.S. troops.

"Everyone is tired of war," the op-ed from the brutal warlord read. "I am convinced that the killing and the maiming must stop."

"We are committed to working with other parties in a consultative manner of genuine respect to agree on a new, inclusive political system in which the voice of every Afghan is reflected and where no Afghan feels excluded," the op-ed continued.

Today, the acting Taliban government is anything but inclusive. And there are already signs that Haqqani's interior ministry will not tolerate dissent. Protests by women seeking basic rights have been broken up by Taliban fighters firing weapons and assaulting local journalists. An interior ministry statement this week decreed that all protests must be approved by the government at the risk of arrests.

"The Haqqani network is the kind of hammer that comes back down and doesn't allow the Taliban to be perceived as moderate," Clarke said. "That's part of the reason why the Haqqanis are stacked in the government. It's to make sure there is no deviation from what they have been working on for the past two decades."

A key concern for the United States is whether Haqqani's rising profile will open the gateway for al-Qaida to resurrect itself in Afghanistan. In the U.N. report, investigators found that the Taliban and al-Qaida "remain closely aligned and show no signs of breaking ties." Al-Qaida members live in at least 15 provinces.

At the moment, said both Jackson and Clarke, the Haqqanis appear more interested in growing their influence in the country, the region and within the Taliban movement rather than waging global jihad.

"They waited 20 years to get back into power," Clarke said. "Now, they are, and they want to hold on to that power."

The Washington Post's Karen DeYoung in Washington contributed to this report.