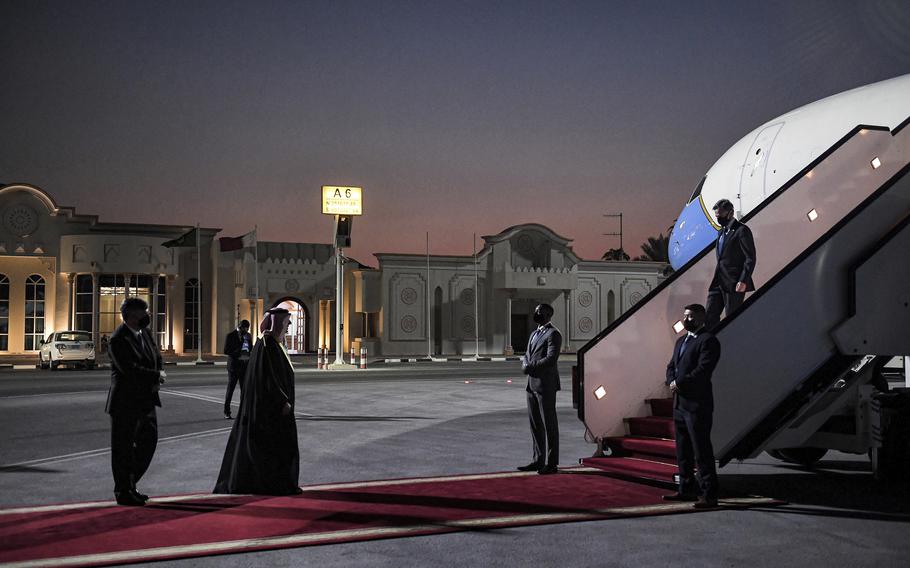 DOHA, Qatar - Secretary of State Antony Blinken said Tuesday that the United States is working with the Taliban to extract U.S. citizens and at-risk allies left behind in Afghanistan after the militant group's takeover last month and that a dispute over some Afghans' travel documentation is to blame for the delay.

A small number of U.S. citizens and hundreds of Afghans have been in limbo for days awaiting Taliban clearance for their charter flights to depart the northern city of Mazar-e Sharif. But conflicting claims about why the aircraft haven't taken off led to intensified criticism of the Taliban and the Biden administration, which promised to help those seeking to flee the militants' rule. They also underscored how complex the mission has become with no U.S. personnel on the ground to verify the accuracy of passenger manifests and personal paperwork.

"It's my understanding that the Taliban has not denied exit to anyone holding a valid document, but they have said those without valid documents, at this point, can't leave," Blinken said at a news conference in Qatar alongside Defense Secretary Lloyd Austin and their Qatari counterparts. He estimated that there are roughly 100 U.S. citizens seeking to flee Afghanistan and said the main impediment was the Taliban's refusal to let Afghans who lacked the necessary documents leave.

"Because all of these people are grouped together," Blinken said, "that's meant that flights have not been allowed to go."

The charter flights have been organized by advocacy groups, members of Congress and veterans of the 20-year war. Some were quick to dispute Blinken's comments, saying the passengers on their flights have all the documentation that was required for evacuation flights before the U.S. withdrawal. They acknowledged, however, that some passengers didn't have passports, a requirement they say is overly burdensome.

"The information we provided the State Department is above and beyond what is usually required for travel in Afghanistan," said Maria McElwain, communications director for Sen. Richard Blumenthal, D-Conn., who has been working with a group of veterans, journalists and advocates to secure safe passage for two planes in Mazar-e Sharif. "Although some of our passengers are small children who, admittedly, do not yet have a full suite of documentation that an adult might have, in those cases we provide shot records and offered to help verify their identity any other way that we could."

Elizabeth Rubin, an American journalist working to secure safe passage of people in Mazar-e Sharif said "names and documents" had been sent to the State Department a week ago and that Albania had given visas to "every single person on these two planes."

Rep. Michael McCaul, R-Texas, citing classified briefings, had suggested over the weekend a more nefarious reason for the delay, telling Fox News, "This is really . . . turning into a hostage situation where they're not going to allow American citizens to leave until they get full recognition from the United States of America."

Blinken rejected that accusation. "We are not aware of anyone being held on an aircraft or any hostage-like situation," he said, characterizing as "real concerns" the logistical challenges associated with verifying passengers' documents.

"But we are working through each and every one in close coordination with the various initiatives and charter flights that are seeking to evacuate people," he said. "But I just want to emphasize that there are a lot of issues to work through."

Taliban spokesman Zabihullah Mujahid said problems with the clearances for charter flights were due to the temporary closure of the Ministries of Interior and Foreign Affairs, but he said the issue would be resolved by Wednesday. The declaration came as the group on Tuesday announced it had formed an acting government for the country, naming as its senior leaders members with close ties to the movement's founder, Mohammad Omar.

"As these two ministries were not active before, foreign trips were not allowed. Tomorrow, when the new cabinet begins its work, all problems with foreign travel will be resolved, and foreign flights will begin as normal," Mujahid said.

During a joint news conference, Blinken's Qatari counterpart, Foreign Minister Mohammed bin Abdulrahman al-Thani, said Doha hopes Afghanistan's international airport in Kabul, seen as critical to the resumption of evacuation flights, will be fully reopened in coming days pending an agreement with the Taliban. The gas-rich Persian Gulf state is working with Turkey to restore commercial flights there, he said.

The plight of Afghans and U.S. citizens seeking to flee is far from the only issue challenging U.S. and other Western officials.

Martin Griffiths, the United Nations undersecretary general for humanitarian affairs, said at the end of two days of talks with senior Taliban leaders that they had appealed for "guidance" on meeting severe needs among the Afghan population. In return, Griffiths said at a briefing for U.N. reporters, he stressed that no aid would go through the Taliban government. All assistance, he said, would be distributed through the U.N. and some 156 international and Afghan nongovernmental partner organizations operating inside Afghanistan.

"You really need to understand us, and we need to understand you," Griffiths said he told Abdul Ghani Baradar, designated Tuesday as Afghanistan's deputy prime minister. Among the guarantees sought for humanitarian agencies, he said, were independence, security, the freedom to hire - men and women - without interference, and access to every area of the country. The Taliban agreed, he said.

Noting that Taliban commitments made to foreigners in Kabul were met only spottily in various places, Griffiths said he asked Baradar for all agreements in writing. "One of the worries we have" is that while the Taliban now says it has put a governing administration in place, it is "not an administration consistent across the country."

One of the first issues the Taliban raised, he said, was the importance of reopening Kabul's airport, not only to allow aid workers free access, but also to ship in humanitarian aid. "They also . . . clearly talked to us about the need for Afghans to return to serve their country," Griffiths said of the Taliban. The best way to persuade Afghans to come back, he said he told Baradar, is to demonstrate they are also free to leave.

Griffiths emphasized that the humanitarian situation in Afghanistan was dire long before the Taliban took over last month. Nearly half the population - 18 million people - is in need of aid, he said, including food, water and basic health care. At least 1 million children were suffering acute malnutrition, he said.

One test of whether the international community is willing to help will come Monday, when U.N. Secretary General António Guterres holds an emergency donor conference to raise more than $600 million for Afghanistan over the next four months. Asked whether Blinken, with whom he met in Doha on Tuesday, had committed to a hefty U.S. contribution, Griffiths said, "I think I must have not had the nerve to ask about the generosity of the United States."

Separately, the United Nations Children's Fund (UNICEF) said late Monday that officials have identified at least 300 children and teens evacuated from Afghanistan without their parents to countries such as Qatar and Germany. Henrietta Fore, UNICEF's executive director, said officials "expect this number to rise" as more unaccompanied children are found among the evacuees. UNICEF spokesman Christopher Tidey said 12 of the 300 children have been reunited with their parents; more details were unavailable.

Some minors were separated from their parents "amidst chaotic conditions" at the Kabul airport, Fore said. Others were traveling alone. She said the U.N. agency has teams on the ground at al-Udeid Air Base in Qatar and Ramstein Air Base in Germany scrambling to identify such children and reunite them with their families, and she urged other countries hosting evacuees to do the same.

"I can only imagine how frightened these children must have been to suddenly find themselves without their families as the crisis at the airport unfolded or as they were whisked away on an evacuation flight," Fore said in a statement. "UNICEF is deeply concerned about the welfare of unaccompanied and separated children wherever they may be. They are among the most vulnerable children in the world."

The Biden administration has said that at least 34 unaccompanied minors from Afghanistan had arrived in the United States as of Aug. 26, but Fore said far more were taken out of Afghanistan and warned that they are at risk of abuse and neglect.

Blinken flew to Qatar on Sunday to express gratitude for the work that U.S. and Qatari officials have done in the evacuation effort.

He and Austin visited a group of U.S. officials responsible for processing tens of thousands of American citizens, Afghans and third-country nationals who were transferred out of Doha. The United States facilitated the evacuation of more than 124,000 people from Afghanistan, the largest airlift in U.S. history.

"This team has accomplished things that are both historic and heroic," Austin told a group at al-Udeid Air Base, including officials from the State Department, Pentagon and Customs and Border Protection. "What you have done has really touched the lives of thousands and thousands of people. You came together as a team."

Blinken also visited members of an Afghan girls' robotics team that became a symbol of progress following the Taliban's harsh treatment of women when it ruled from 1996 to 2001.

The girls, who fled during the Taliban's takeover of the country last month, expressed concern about the future of their country and appealed to Blinken for answers.

"This is a really difficult moment," he said before committing to doing what he could to help them. "There is so much change happening. I can't tell you where everything is going to land."

Back in Washington, U.S. officials continue to grapple with security questions related to Afghans seeking to resettle in the United States.

Speaking to reporters Tuesday, a senior Biden administration official refused to directly answer questions regarding how many red flags had been found during security checks and what happens to Afghans who might not clear the screening process to enter the United States. The official, who spoke on the condition of anonymity under ground rules set by the White House, declined to offer any numbers, arguing the situation was too "fluid" and the process of vetting refugees was too "individualized" to say exactly what "derogatory information" might lead to an Afghan ultimately being denied entry into the United States. The official hinted, however, that thus far, no Afghans who were brought out during the airlift have been explicitly blacklisted.