Afghan resettlement raises the question: Who is coming to the United States? 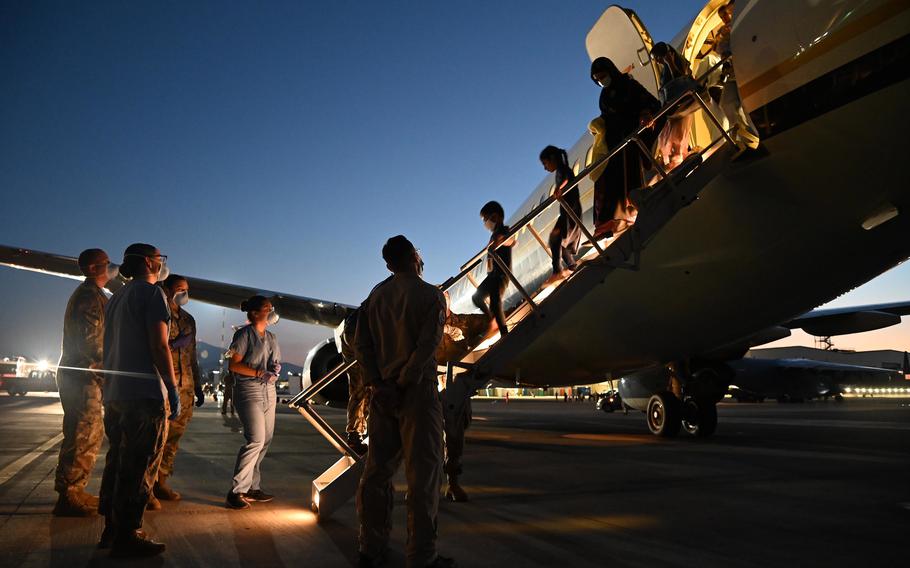 It was 2:30 a.m. when Mustafa, finally safe in the cargo bay of an American military plane after surviving the chaos and violence of the Kabul airport, glanced around at the other weary Afghans and was struck by what he saw.

Many had minimal identification and did not appear to have worked closely with the United States as he had, serving as a translator and analyst. They were "just people," he said, who took advantage of a disorderly evacuation to flee their turbulent country.

"Nobody knows who was the good guy and who was the bad guy getting into the plane," said Mustafa, who asked to be identified only by his first name to protect relatives still in Afghanistan. He added, "It's a risky thing that I believe happened."

With tens of thousands of Afghans arriving at the end of America's longest war, such comments from witnesses and government officials have left a question looming over the coming weeks, one that is already dividing host communities from Missoula, Mont., to Jacksonville, Fla.: Who is coming to the United States?

The emerging picture is more complicated than President Joe Biden's depiction of the airlift that whisked planeloads of Afghans to safety as a moral imperative to save people who helped Americans during a difficult conflict despite the risk. "We got thousands of Afghan translators and interpreters, and others who supported the United States, out," he said recently.

A senior administration official said in an interview that the vast majority of Afghans who pass security screenings at transfer points abroad and want to enter the United States will be allowed to come. That includes a potentially sizable number who raise no red flags — but who also cannot demonstrate close ties to the U.S. effort in Afghanistan, acknowledged the official, who was not authorized to speak on the record.

Administration officials have yet to provide estimates of how many among the 50,000 or more evacuees expected to arrive in the United States will fall into this neutral category, compared with the number who clearly worked alongside Americans.

Pressed for more clarity, the senior administration official said the situation is fluid, data is elusive and lines are blurry, likening various categories of evacuees to a "set of concentric circles" regarding the strength of their ties to the U.S. mission in Afghanistan.

Homeland Security Secretary Alejandro Mayorkas said in an interview that he also could not specify how many of the evacuees worked with the United States. "I can't really quantify it or measure it against expectations," said Mayorkas, whose agency is taking the lead on relocation. Representatives of the departments of Defense and State, which spearheaded the evacuations, also declined to provide a breakdown.

Even as Afghan evacuees are undergoing background checks including fingerprints, photographs and, in some cases, deeper investigations by intelligence analysts or the FBI, some prominent Republicans are seizing on the fuzzy picture of who exactly left Kabul to stoke security concerns, or even reject the idea of resettling Afghans in the United States.

"You can't tell me that there are not dangerous people coming into our country," said Rep. Matthew Rosendale, R-Mont., who is trying to convince his state's governor not to accept any Afghan evacuees because of what he argues is a slapdash and opaque vetting process.

This kind of criticism puts pressure on Biden not only to ensure that the process is working as promised, but to convince the public that it is. White House officials say they will make the case forcefully in coming weeks that the screening is thorough and the relocation is safe.

"We use multiple databases and a multilayered approach," said Mayorkas. "We have confidence in our security screening and vetting processes."

Biden's aides see the resettlement process as the president's next big test in the wake of the troubled withdrawal from the two-decade war. The turbulent and deadly drawdown has battered Biden's approval rating and hurt his international image.

The relocation also threatens to open a new front in the divisive national immigration debate. In his first eight months, Biden has been attacked by Republicans over the surge of migrants at the southern border and faced a backlash from Democrats after wavering on a vow to increase the nation's annual cap on refugees.

Already, the Afghan resettlement effort is facing potential obstacles. The State Department said Friday that it was working to identify possible forced marriages among Afghans so it could protect any victims.

And NBC News reported that officials planned to send two evacuees who arrived at a U.S. airport to Kosovo after issues arose during their security screenings. The State Department has said that evacuees who raise red flags will be sent to third countries for further review.

For now, broad bipartisan majorities support taking in Afghans who have been screened, according to a recent Washington Post-ABC News poll. Yet some of the most influential voices on the right have reacted negatively; former president Donald Trump has suggested, with no evidence, that terrorists may have boarded some evacuation flights.

Others dismiss the security arguments as fearmongering and coded xenophobia.

"Under the auspices of safety and securing our nation, we have folks who are actually just racist talking about vetting," said John Engen, the Democratic mayor of Missoula. "They're saying, 'How do we know this isn't Osama's third cousin twice removed who's coming to kill our women?' But I was made comfortable a long time ago with the vetting system."

Still, administration officials' description of the evacuees has shifted. For weeks, they largely characterized the Afghans they were helping leave their country as people whose history of working with Americans in Afghanistan would jeopardize their safety under the Taliban. More recently, they have acknowledged that the evacuees who fit that description make up only a subset of the nearly 125,000 who were airlifted from Kabul on U.S. military flights.

Often, they define many of the evacuees in broad terms as at-risk Afghans. "We will admit vulnerable Afghan women and girls, journalists and other constituencies that need our relief, and we are very proud to deliver it," Mayorkas told reporters Friday.

Overall, officials say they have made plans to bring more than 50,000 of the Afghan evacuees into the United States. The nonprofit refugee assistance organizations that help with such efforts are preparing for at least that many.

After passing security checks at the intermediate stops in Asia and Europe, those wanting to come to the United States who are not American citizens or green-card holders are generally sent to one of eight military installations around the country to undergo medical checks, complete their paperwork, connect with resettlement groups and integrate into communities.

According to recent estimates, more than 25,600 Afghan evacuees are now being housed at military installations, with another 30,000 at transit sites in the Middle East and Europe.

Though many call them "refugees," the Afghan evacuees are not entering through the formal refugee program, nor do they have access to its substantial benefits. Instead, the State Department has established a 90-day emergency program, providing less than $2,500 for each evacuee.

Biden officials have not said how many of the evacuees might qualify for a "special immigrant visa" based on their direct work with Americans in Afghanistan. The majority will arrive instead under what DHS calls "humanitarian parole," a catchall status that lets foreigners enter the United States under exceptional circumstances.

The future for those in that category is far less settled than for visa holders such as Mustafa, who said he opted to move to the United States in 2017 for his own safety after working with the American government and organizations in Afghanistan.

Mustafa went back to Afghanistan this summer to visit his wife and daughter, who had stayed in the country. But just after he arrived, Kabul fell to the Taliban, so Mustafa and his family rushed to the airport. After initially being crowded out in the dense throng, he parted ways with older relatives and pushed to the front of the line.

After enduring hunger and sleepless nights at the airport, Mustafa, along with his wife and daughter, boarded a military aircraft to Qatar, where they found safety, but also a seven-hour wait in searing heat. Then it was on to Dulles International Airport, where his wife and daughter entered the United States under the parole designation. They will now work toward more permanent status.

Across the country, religious and charitable organizations are helping resettle Afghans who have endured similarly harrowing journeys, going out of their way to assure neighbors that the newcomers pose no threat.

"With this crisis, even more we're having to explain things," said Matt Schmitt, associate director of Catholic Charities Jacksonville, which has plans to resettle some 200 Afghans. "We're a blue city with a red governor in a red state, and I've got best friends on both sides of the political divide that have reached out to me and said, 'Man, what's really going on?'" Schmitt said he can generally set people's minds at ease by talking them through the process.

Engen, the Missoula mayor, said his community is looking forward to welcoming Afghans, just as it took in Iranians, Syrians and Hmong people during previous crises. "There are lots of things to actually be afraid of. I think as a whole, this current resettlement ain't one of them," Engen said.

That contrasts with Rosendale, the Montana congressman who joined other conservative lawmakers in writing Mayorkas that "the hurried evacuation raises serious concerns about the adequacy of the vetting." Engen said dryly, "I know that the mayor of Missoula ain't going to change Matt Rosendale's mind."

Amid calls to ensure that the myriad groups and agencies involved in the resettlement are cooperating, Biden on Friday named former Delaware governor Jack Markell, a close friend, to work with Mayorkas and coordinate the relocation through year's end.

Mayorkas held a 90-minute videoconference with leaders of the resettlement groups and others late last month to discuss the Afghan effort. Two participants praised Mayorkas's commitment and said working groups have been organized to dive deeper into some issues.

"In order for this to be successful, it's really going to require a partnership," Mayorkas said. "The federal government cannot do it alone."

Still, the relationship between the administration and resettlement groups is fragile, badly strained by Biden's initial hesitancy earlier this year to raise the nation's annual cap on refugees. Now, activists and liberal lawmakers are pressing Congress and the White House to free up more resources for the Afghan evacuees.

They are also fighting the battle for public opinion, hoping to counter the warnings of those wary of bringing Afghans to the U.S.

"Come to my district. We'll go out for Afghan food. I'm happy to introduce you to the community," said Rep. Ro Khanna, D-Calif., who represents the largest Afghan American community in the United States. "I think you'd come away thinking differently."