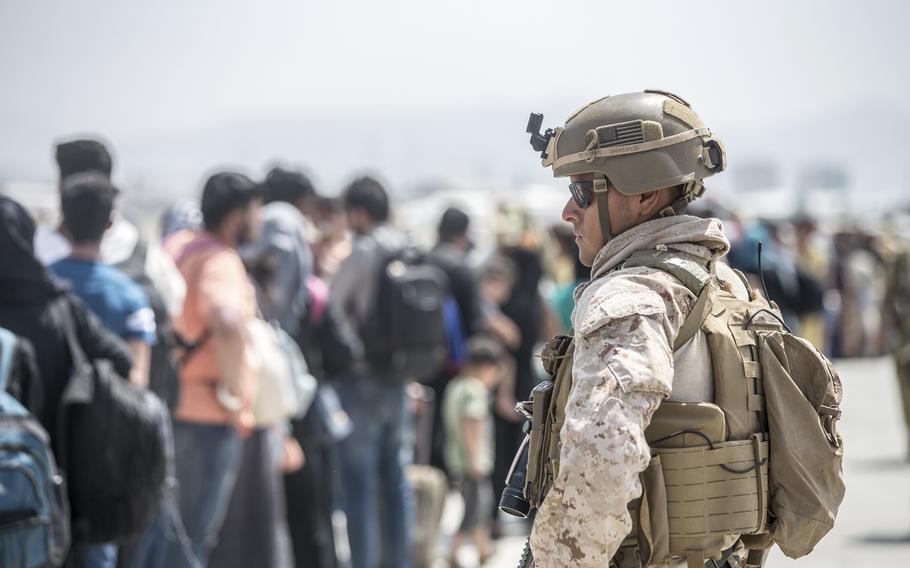 WASHINGTON — The U.S. reached its largest number of airlifts out of Afghanistan in a single day moving 16,000 evacuees out of the country on Monday, the same day an Afghan soldier died in a firefight at the gates into the Kabul airport, according to the Pentagon.

“The incident appeared to begin when an unknown hostile actor fired upon Afghan security forces involved in monitoring access to the gate,” Urban said in a statement Monday. “The Afghans returned fire, and in keeping with their right of self-defense, so too did U.S. and coalition troops.”

No U.S. or coalition forces were hurt in the brief exchange of gunfire, Urban said. The surviving wounded Afghan troops are in stable condition and receiving treatment at an airfield hospital.

The U.S. troops sent to Kabul less than two weeks ago originally were intended to provide security support within and outside the airport, but so far the forces have stayed largely within the facility as hordes of evacuees swarm the airfield, said Army Maj. Gen. Hank Taylor, the Joint Staff’s deputy director for regional operations.

Instead, the U.S. is coordinating with the Taliban, which has set a perimeter around the airfield with checkpoints through which those with U.S. passports or visa applications must pass to reach the airport, Taylor told reporters at the Pentagon.

“Within the last seven days we've seen the ability to continue to coordinate and synchronize with Taliban checkpoints,” he said. “I would say if you look at the last two days, that ability with the commanders on the ground to work with the Taliban tactical commanders has allowed … the ability to control better the access into [the area surrounding the airport].”

The key obstacle preventing documented citizens and visa applicants from reaching the airport is the crowds of people surrounding the airport, The Associated Press reported Monday.

German Defense Minister Annegret Kramp-Karrenbauer told Germany’s Bild newspaper that “what we need [from the Taliban] is being granted” regarding safe passage through checkpoints, according to the AP. As a member of the coalition forces, Germany is helping with the evacuation operation.

“The danger comes more from these uncontrollable crowds of people,” she said, according to the AP.

Still, some U.S. passport-holders have reported difficulty passing through the Taliban checkpoints, forcing U.S. troops to use helicopters at least twice since Thursday to go out into Kabul and bring more than 169 Americans to the airport, chief Pentagon spokesman John Kirby said Monday.

Yet on Monday, the U.S. achieved its largest number of airlifts out of Afghanistan in a single day since evacuations began in late July. In the past 24 hours, 25 C-17s and three C-130s military transport aircraft and 61 commercial flights have flown 16,000 people out of Kabul, Taylor said. All but 5,000 of the evacuees were taken on the military aircraft.

In total, the U.S. has evacuated about 37,000 people from Kabul since Aug. 14, and 42,000 since July, according to the Pentagon. Those evacuees are taken to secondary locations outside of Afghanistan for processing at multiple international sites, including Al Udeid Air Base in Qatar, Naval Air Station Sigonella in Italy, Ramstein Air Base in Germany and Naval Station Rota in Spain.

Another 1,200 evacuees are undergoing the final steps in the visa application processes on four stateside military installations — Fort McCoy in Wisconsin, Fort Lee in Virginia, Fort Bliss in Texas and Joint Base McGuire-Dix-Lakehurst in New Jersey.

“[U.S. Northern Command] continues to build out capacity to ensure they are prepared to receive more flights that will come in the next few days,” Taylor said.

To date, the U.S. has not committed to extending its evacuations past its Aug. 31 deadline despite the difficulty of the operation. British Prime Minister Boris Johnson plans to press President Joe Biden for an extension, according to the AP.

Taliban spokesman Suhail Shaheen told Sky News on Monday that Aug. 31 is a "red line" that would "provoke a reaction" if the U.S. extends passed it.

Shaheen also said the Taliban “will not allow America's military presence in Afghanistan after the end of August,” according to a Monday morning tweet from the official Twitter account for the Islamic Emirate of Afghanistan, the name of the government that the Taliban plans to establish once full transition of power is completed.