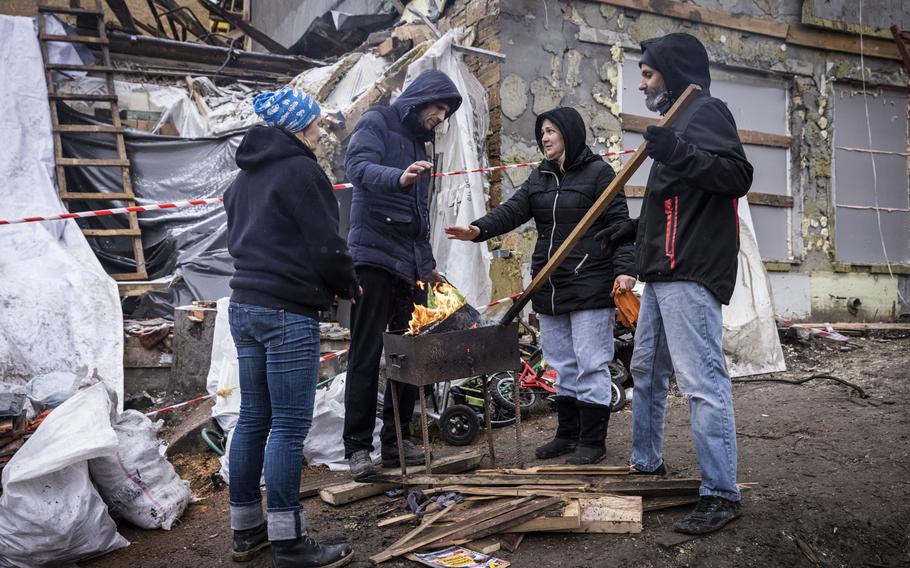 Serhiy Kaharlytskiy, 42, center left, whose wife was killed when a Russian missile landed near their house in Kyiv on New Year’s Eve, and his wife’s friend, Daria Khizhchuk, center right, warm their hands as volunteers clear rubble. (Ed Ram/for The Washington Post)

KYIV, Ukraine — Two days after a Russian missile killed her close friend on New Year's Eve, Daria Khizhchuk was back at her job waiting tables at an upscale Italian restaurant in the Ukrainian capital.

Her shift passed in a daze; she filled chatty customers' orders on autopilot while consumed with grief.

"It was the worst," Khizhchuk said. "Sadly it is like that. There are two worlds."

"That's how it has to be," she added. "This is our last winter like this. Next year we will be free."

As Kyiv settles into its first winter since Russia invaded last February, residents are coping with the harsh realities of the grinding war: a constant threat of airstrikes, regular power outages, fears of nuclear attack.

They are also carrying on. Dance studios and nail salons are open — having learned to operate with battery-powered lights even when Russian attacks on infrastructure cut power. Cafes and restaurants, often running on generators, are packed. Serhiy Kaharlytskiy holds a wedding photo taken from the rubble of his home. (Ed Ram/for The Washington Post)

The resilience of Kyiv residents is proof that Russian President Vladimir Putin has largely failed in his plans to make life unbearable by depriving their homes and businesses of heat and power this winter.

In recent days, improved Ukrainian air defenses and repairs to infrastructure damaged by Russian strikes have provided civilians with consistent power for the first time in weeks. The boost in connectivity has lifted morale. The randomness of the power grid often meant it came down to chance who could turn on their lights and who could not — at times creating an awkwardness between the haves and have-nots.

Olena Baibina, 50, once had steady work cleaning houses around Kyiv. That dried up when many of her loyal clients fled the capital early in the war. But recently, even as some work returned, the power outages prevented her from using a vacuum cleaner or a washing machine. Water outages added to her struggle.

Compared with worst-case scenarios, many Ukrainians see the power outages as a manageable inconvenience. But for Baibina, it meant she could barely make enough money to survive. "I would have to go back home, because how can I work like this?" she said.

With the threat of more attacks looming, businesses are preparing for darker days ahead. Many have purchased generators to ensure they can still operate in case of more prolonged blackouts. The Ukrainian government has installed generator-powered "invincibility points" in spaces around the capital, where residents can go to warm up and charge devices. Most people are trying to limit their use of unnecessary electricity to avoid overwhelming the grid before the coldest days of winter. 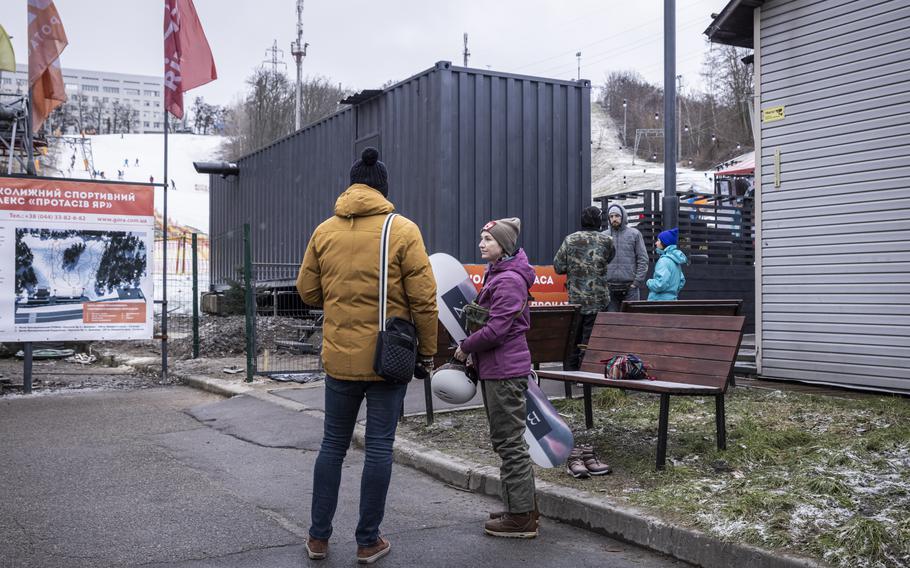 On a recent afternoon, Khizhchuk and other friends helped Serhiy Kaharlytskiy, 42, whose wife, Iryna, was killed in the New Year's Eve attack, clean up what was left of their home. Snow was falling, and they were trying to salvage what they could from the house before even worse weather set in.

Kaharlytskiy climbed through the wreckage and emerged holding a framed photo of him holding his wife on their wedding day in 2010. The couple and their 10-year-old son survived 10 months of Russia's war on Ukraine only to become victims as the year came to a close.

"In one second I lost my wife, my car and my house," Kaharlytskiy said. "The only thing I have left is my son."

Still, even in his grief, he said he did not fault others for trying to relish in some sense of normalcy while they can. "If my wife hadn't died, I could be drinking a cocktail around the corner now, too," he said.

From the hill where his house once stood, skiers and snowboarders could be seen zigzagging through the snow on an urban ski slope nearby, even as air raid sirens warned of another possible attack.

When asked if she feared a strike in the area, Daria Nadolgo, who was learning to snowboard for the first time that day, replied: "I'm more scared I'll fall here."

Distracting herself with a hobby, she said, is "good for our mental health." Not all Ukrainians see it that way.

Baibina, the house cleaner, lives in a low-income neighborhood in Kyiv. As some residents of the capital enjoy nightlife and embrace the relative return to normalcy compared with the start of the invasion, she is struggling to make ends meet.

"Boys are stuck in trenches, freezing and dying, and you're doing this? While I work for some pennies in order to buy some bread and water, you allow yourself this?" she said. "There's a war happening."

Mia Willard, 24, a Ukrainian American who lives on Kyiv's left bank, is studying online at the University of Central Florida. The war has shifted her priorities, with most of her time now spent on humanitarian work. But she knows she must still complete her online assignments — even when she goes weeks without steady power.

"I would go to sleep whenever we didn't have electricity," she said. When power came back on, she would rush to charge her devices and download any readings she needed for class. She would sit on the floor of a nearby supermarket turned invincibility point to take advantage of its generator power. Once, she worked through the night in the office of the international political think tank where she works on the other side of town to complete an assignment on time.

She knows her fellow students in the United States are not coping with similar conditions. "I can't imagine life not in a war zone," she said. "It's inconvenient but not so terribly bad." 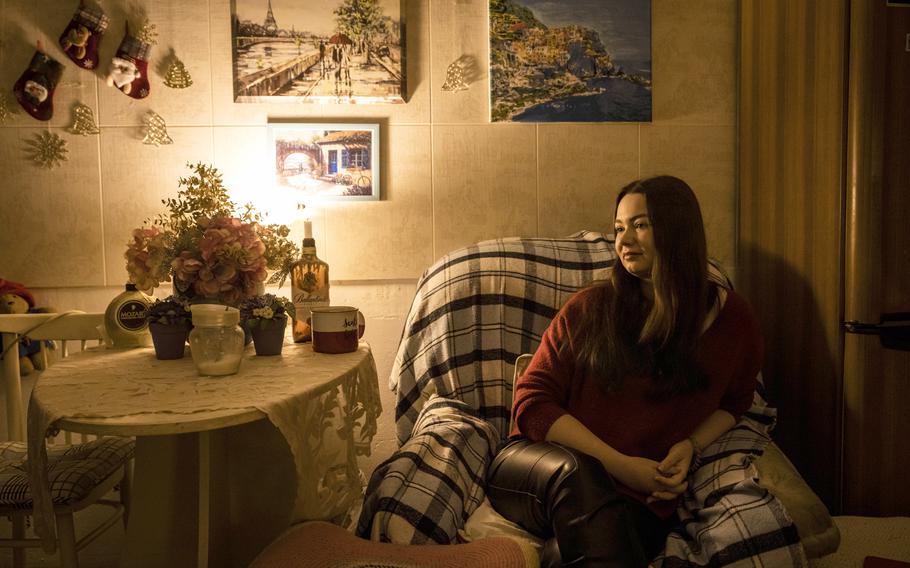 Kyrylo Trembovetskyi, 26, works for a Ukrainian internet company. His office bought generators and extra batteries to ensure their routers do not lose connection.

"I'm getting very used to these circumstances," he said. "When there are thoughts of getting tired of it all, I think about the boys at the front."

Daryna Polishchuk, 19, is a student who cuts hair part time in a small salon in a market in a neighborhood on the left bank. During a recent attack, she heard sirens and booms but had two clients waiting. She didn't close the shop and return home until she had taken care of them. "I had to finish them up," Polishchuk said. "I can't do anything [about the attack] anyway."

Grasping onto routine is how people here are coping, said Ihor Kostetskiy, a dance teacher in Kyiv.

In November, as air raid sirens blared and strikes hit the capital, he told his students to stay in their shelters. Then, about 6 p.m., the sirens stopped. He was in the studio, he wrote to his students, if anyone wanted to stop by. After a day of intense Russian bombardment, 10 people showed up to dance.

"I think it's a great outlet for overflowing emotions," Kostetskiy said.

Since the strikes that killed civilians on New Year's Eve, he said, even more students have reached out to him about signing up. "'I really want to dance,'" he said one prospective student wrote to him. "'I don't want to postpone. There's no time like now.'" 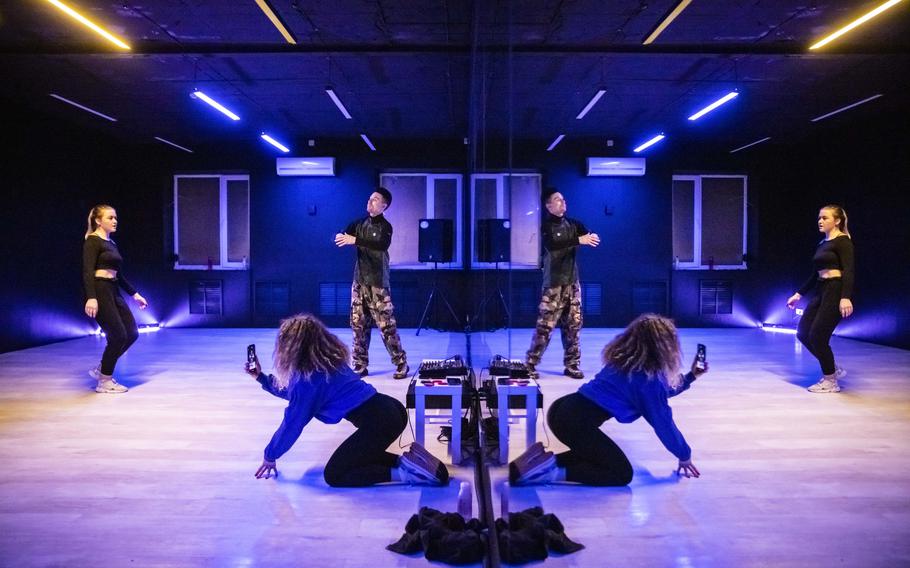 Ihor Kostetskiy leads a dance class for young women and girls on Jan. 6, 2023, in Kyiv, where Russian airstrikes and power outages have become part of the normal routine. (Ed Ram/for The Washington Post)