‘Nothing left to destroy’: Russia is fighting for land already in ruins

LYMAN, Ukraine — Tamara Klimashenko stood in what was once her cherished flower garden and pulled out her phone to show photos of the peonies, petunias and chamomiles that once covered this patch of dirt now littered with shrapnel.

Her husband, Anatoly Klimashenko, pointed to where the shells exploded: one near the cabbage patch; another where the strawberries grew; yet another on the garage he built.

Lyman was the site of fierce fighting in May, when Russian forces seized the city, and in the summer. The Russians occupied Lyman until Oct. 1, when they fled a fast-advancing Ukrainian counteroffensive.

But even amid the wreckage of their home — with the walls blown out and wood planks hanging from the ceiling — the Klimashenkos said they feared an even worse fate: another Russian invasion, potentially their third in eight years, as President Vladimir Putin’s self-assigned “main goal” of “liberating all of Donbas” yet again puts their city in the Kremlin’s crosshairs.

“They’re going to bring more destruction,” said Anatoly, 62. “And already there is nothing left to destroy.” Like many others here, the Klimashenkos for about six months have slept in an underground storage unit to avoid the shelling, and now subsist on humanitarian assistance brought by Western aid groups.

Putin’s insistence that the war will continue until his objectives are met means that the fight for Lyman — or what’s left of it — isn’t over. The Russian president has doubled down on his illegal annexation claims in recent days, insisting that people like the Klimashenkos and their neighbors are now Russian citizens, who must be liberated from the Ukrainians who liberated them from the Russians in September.

This destructive, and seemingly pointless, cycle of conquest and liberation has been underway for nearly nine years — ever since the Kremlin began fomenting a separatist war with false claims that Russian-speaking Ukrainians were under threat from the pro-Western, pro-democracy protesters who rose up in fury after President Viktor Yanukovych, under pressure from Putin, broke a promise to sign expansive political and economic agreements with the European Union.

Lyman and many small cities, towns and villages nearby now lie in ruins.

In Lyman and Yampil, entire neighborhoods have already been leveled, with the tops of apartment buildings blown off by shells, massive craters left next to children’s playgrounds, and just a few dozen elderly people left and scarred from ceaseless shelling.

A visit to the town of Dolyna, formerly home to 21,000 people, found no inhabitants at all — only the sound of wind rustling against corrugated metal. Destroyed homes in Lyman, where residents expect Russia will inevitably invade for a third time. (Heidi Levine/for The Washington Post)

The majority of residents, save the most desperate and destitute, have fled — east for those who support Russia, west for those loyal to Ukraine. Years of war have both left the area a wasteland and also hardened its people against the Kremlin, making a mockery of Russian claims that their forces would be welcomed with open arms.

Putin falsely accuses Kyiv and its Western supporters of carrying out a genocide in the Donbas, the wider territory that encompasses the Donetsk and Luhansk regions. Ukraine’s Western supporters have imposed unprecedented sanctions aiming to punish Russia for invading and trying to annex the Donbas, along with the Zaporizhzhia and Kherson regions, in violation of international law.

Ukrainian President Volodymyr Zelenskyy has pledged to reclaim all of the occupied lands. But an equally likely fate for these fought-over territories is the devastation visible in and around Lyman.

Larisa, 62, of Lyman, recalled counting as many as 200 shells exploding per day when she and nine neighbors were trapped in a basement between Russian and Ukrainian lines for five weeks in the early fall, in a suburban part of the city that used to be part of a resort destination.

One shell directly struck the kindly 70-year-old amateur beekeeper across the street, nicknamed Mikhalych, as he went to feed the stray dogs in the neighborhood. His body lay in the street, giving off a stench that his neighbors could do nothing about for five days because of the bombardment.

“It’s hell, Armageddon, and we’ve already lived through it,” said Larisa, who asked to be identified by her first name for fear of reprisal. As she spoke, she stepped around shattered glass, a child’s pair of goggles and a discarded Coca-Cola bottle. “Is this being liberated?” 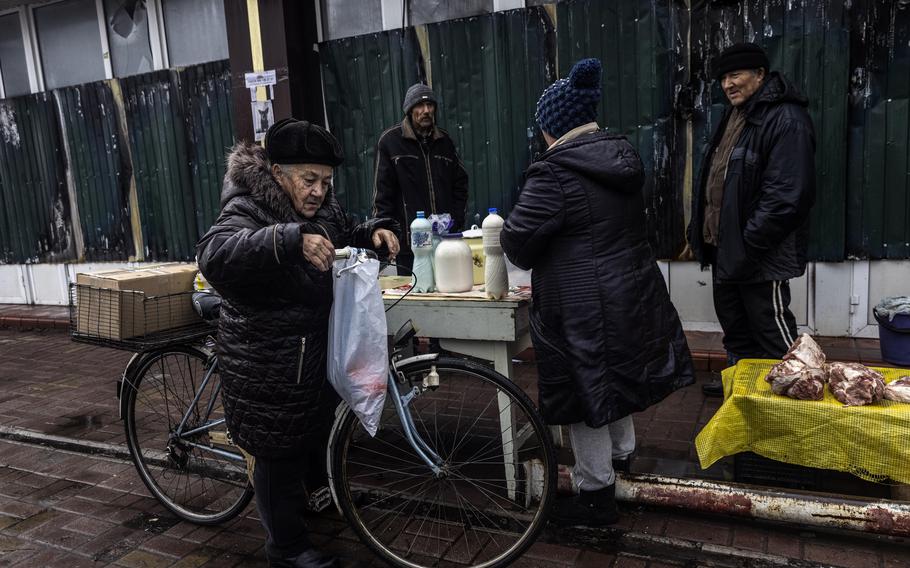 Residents receive loaves of bread distributed by a neighbor in Yampil on Dec. 17. (Heidi Levine/for The Washington Post)

Before she found her son’s body six days after his death, and before shrapnel shattered her walls and forced her to live for seven months in a basement, Tamara Kovalenko, 65, said she did not care much if her city was controlled by Russia or Ukraine — but that’s no longer the case.

“I’ve changed my views completely,” Kovalenko said, as she picked up a bag of donated food from a United Nations distribution point in the center of town. “In 2014, I didn’t hate the Russians.” With her aid package, Kovalenko returned to a home with no electricity, heat or running water.

Artillery shells exploded in the distance roughly every 30 seconds, and machine gun fire erupted every few minutes from the front lines about six miles away. “Now, we are so afraid of them coming back that we try not to think about it, not to even imagine it,” she said. “We are just terrified.”

After Russian proxies seized control of parts of the Donbas in 2014, the pro-Kremlin authorities banned the Ukrainian language from being taught in schools and introduced the ruble as the official currency, according to Sergei Anatolyevich Garmash, a journalist and Ukrainian politician who was part of the failed negotiations to implement the Minsk II peace accords, a 2015 cease-fire agreement.

Combining the gains after 2014 with this year’s invasion, the Kremlin has taken control of roughly 75 percent of the Donbas region, according to Paul D’Anieri, a professor who studies Eastern European politics at the University of California at Riverside.

Capturing the city of Bakhmut, where heavy fighting is now taking place, would give Russia yet another foothold in its push to seize of all of the Donbas, D’Anieri said.

And yet, many experts say, Putin’s repeated attempts to seize the territory have led to a surge in pro-Ukrainian sentiment. Studies conducted in 2014 and 2022 found that the region grew significantly more pro-Ukrainian in the aftermath of Putin’s invasions, D’Anieri said.

Even many who might have been inclined to welcome Russian troops now seem too exhausted to care. Zoya Konstantinovna, 67, sits near a wood-burning stove with her neighbor in the basement of their apartment building in Lyman on Dec. 17. (Heidi Levine/for The Washington Post)

Since shelling destroyed the staircase to her apartment building nine months ago, Lubov Gazhla, 62, has lived in a sordid storage closet underground, down a narrow maze of rusted pipes and exposed brick. A critic of the Ukrainian and Western governments, she expressed pride in her Russian roots and serenaded reporters with part of the epic poem “Ruslan and Ludmila,” by the Russian writer Alexander Pushkin.

But Gazhla said that — above all else — she wants the fighting to stop.

“I don’t care if we’re ruled by the Africans at this point,” Gazhla said, showing reporters the small tin can she has used to go to the bathroom for the last nine months. “Who can live like this?”

In a ceremony at the Kremlin on Tuesday, Putin presented awards to the new governors appointed to lead the four regions of Ukraine he has claimed, illegally, to have annexed, including Luhansk and Donetsk.

But in some parts of the Donbas, there is almost nobody for them to govern.

Several towns in the Donbas with a few thousand people — Toshkivka, Novotoshkivske, Bilohorivka, Makiivka — have been entirely or almost entirely depopulated, according to Serhiy Haidai, the exiled governor of Luhansk, which is now almost entirely under Russian control.

In other cities in the Donbas, where the population has been halved or reduced even further, the critical infrastructure is decimated. Across the region, almost every school has been destroyed by shelling, according to Haidai. The gas pipes in most cities are also “completely destroyed.” 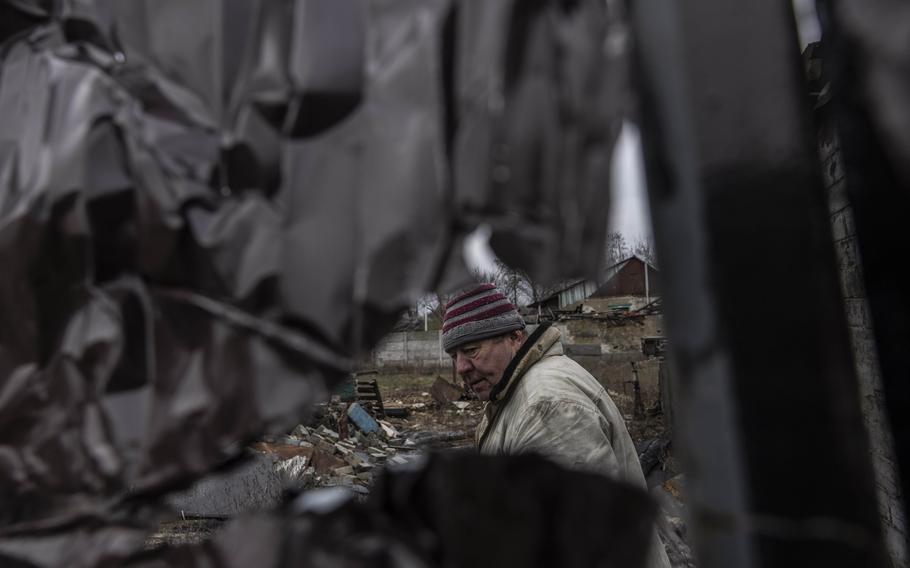 Anatoly Klimashenko tries to repair a metal wall near his damaged home in Lyman on Dec. 18. (Heidi Levine/for The Washington Post)

In the city of Kreminna, close to the front lines, the water systems are demolished. In parts of Luhansk, residents of bombed-out buildings gather logs to heat their homes and shower in tents using outdoor buckets, Haidai said.

In Donetsk, Bakhmut has been annihilated by months of grueling warfare.

Many of the people remaining in the western cities of the Donbas say life has improved a bit since Russians were forced to fall back in September and October. Western aid has begun arriving daily, providing a baseline of food and medical supplies.

Repairs have started on a handful of shattered roofs. In Yampil, the Bon Appetite convenience store reopened two weeks ago — the only open store in town — after being closed throughout the occupation.

But progress has been slow, and scars from Putin’s invasion remain ever-present. 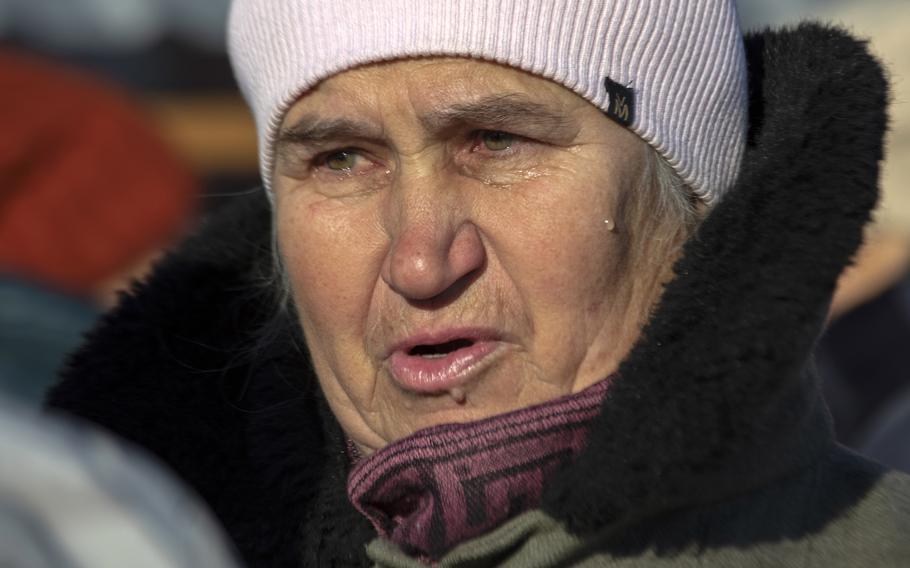 Tamara Kovalenko, 65, weeps as she reflects on her son’s death during fighting, in Yampil on Dec. 17. (Heidi Levine/for The Washington Post)

In Lyman, Zoya Konstantinovna, 67, cried into a cloth as she described how missile fire tore into her former home, before showing reporters the sealed sack of water that she uses daily as her shower even now, more than three months after Ukrainian forces retook the city.

Roughly two dozen of the hundreds of people who once lived in her apartment complex now spend most of their days in the below-ground bunker, with the shelling still too present a danger to sleep elsewhere.

“We are like rats who live underground,” Konstantinovna said. “Politics — all that is very far from us. All I want is peace and health. We just want to not live like this anymore.”

Having already lived through two occupations, Victoria Svichinskaya said she goes home every night and listens to news from the front lines until her phone dies.

Russian soldiers turned her home into a military barracks for five months when Lyman was occupied. They looted her stove, ripped out a toilet seat and demolished a section of her home.

Formerly the owner of two clothing stores since destroyed by the invasion, she stood recently at an open-air market across from two homes destroyed by shelling, trying to sell a few dozen cans of Hell Energy, a soft drink, and sealed cases of kielbasa.

“The next time, if they come back,” Svichinskaya said, “they’re going to take our lives.” Lubov Gazhla, 62, wears a headlamp as she sits on the bed in the tiny room she is living in underground in the basement of her apartment building in Lyman. (Heidi Levine/for The Washington Post) A dog follows a man as he rides past a large electrical tower that fell over onto a road, in the town of Yampil, Ukraine, on Dec. 17. (Heidi Levine/for The Washington Post)