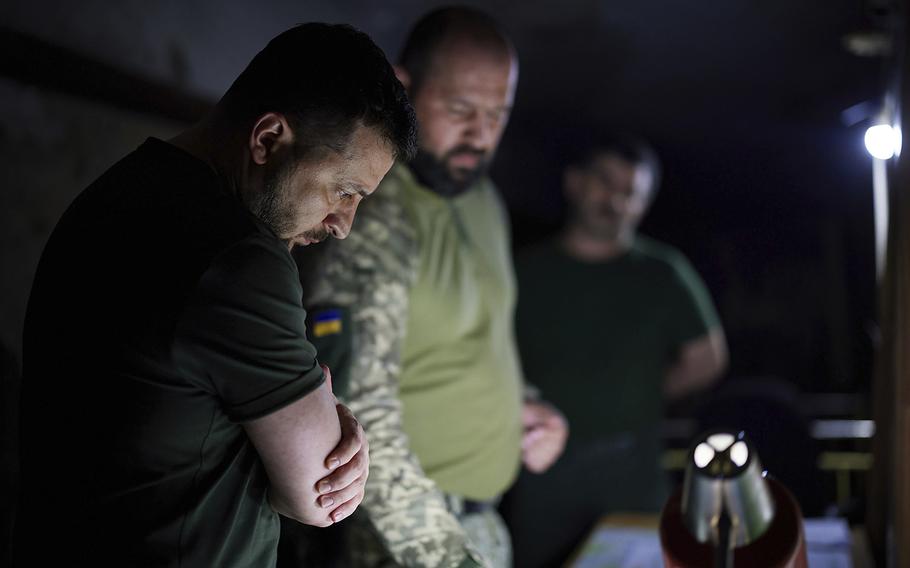 A year ago, Ukrainian President Volodymyr Zelenskyy was a somewhat unpopular leader in Kyiv, viewed by his critics as a lightweight jokester. Now, in the wake of Russia's February invasion, the wartime president is a global icon, a Ukrainian national hero, the world's prolific video-conferencer and, yes, the least surprising figure in recent memory to receive the designation of Time's Person of the Year.

The international admiration for Zelenskyy is ultimately about much more than the man himself. His stoicism and courage seems to project the spirit of a nation that has withstood the Russian onslaught for close to 10 months at hideous cost in lives and resources. It's now hunkering down for a possibly punishing winter, as Russia has carried out targeted strikes on the country's energy infrastructure. At any given moment, by some measures, at least 2 million and as many as 10 million Ukrainians are living without electricity, plunged in a cold, enveloping darkness. As my colleagues reported, even then, many Ukrainians are not letting their Kremlin-inflicted woes darken their mood.

Since the conflict flared, Zelenskyy and his allies have insisted their battle is not simply a defense of their own territory, but of a larger civilizational struggle, pitting their liberal aspirations and fledgling democracy against the tyranny and authoritarianism embodied by Russian President Vladimir Putin's Russia.

"We are dealing with a powerful state that is pathologically unwilling to let Ukraine go," Zelenskyy told Time's Simon Shuster, suggesting that the Kremlin could not countenance a Ukraine that rejected its sphere of influence. "They see the democracy and freedom of Ukraine as a question of their own survival."

Zelenskyy echoed what he and many other Ukrainians have been saying for months, that they were fighting on the behalf of other democracies vulnerable to Russia's predations: "If they devour us, the sun in your sky will get dimmer."

On Tuesday, dozens of nations at an international conference in Paris rallied around Ukraine. They pledged more than $1 billion in additional aid to support Ukraine in the near term, including to help boost its battered energy grid and other aspects of its civilian infrastructure.

"Over $440 million of the total aid pledged is expected to be directed to Ukraine's energy network. French officials said the final amount would likely rise," my Washington Post colleagues reported. "In a video address earlier on Tuesday, Zelenskyy urged the international community to make maintaining the country's energy supply a priority, calling for over at least $850 million in aid for the sector."

French President Emmanuel Macron hailed Ukraine's "bravery and determination," and said that the work of the conference in the French capital is "tangible evidence that Ukraine is not alone."

Kyiv is still adamant that it needs more arms and weapons to repel Russia's offensives and reclaim more of its lost territory. "Given the scale of the war and Russia's unwillingness to accept the reality and withdraw from Ukraine, we will need to fight through the winter," Ukrainian Foreign Minister Dmytro Kuleba told reporters. He added that Russia's strikes on civilian targets and Ukraine's energy infrastructure was a mark of its broader military failure.

"Such barbarism is Russia's response to losing the war on the battleground," Kuleba said. "They have suffered a number of humiliating defeats."

Ukraine has also been on the receiving end of a mammoth flow of Western weapons and military aid. On Tuesday, my Post colleagues reported that the Biden administration was preparing to send the Patriot missile system — its most sophisticated air defense technology — to Ukraine.

Western support for Kyiv is holding, no matter fears over war fatigue of many countries that was deepened by the wider economic impact of the war and the energy sanctions placed on Russia's economy.

"Among the many miscalculations that Putin has made is his bet that the invasion of Ukraine would strain relations among his adversaries," wrote German Chancellor Olaf Scholz in a recent op-ed for Foreign Affairs. "In fact, the reverse has happened: the EU and the transatlantic alliance are stronger than ever before."

Thousands of miles away, officials from another country facing up to a revanchist neighbor are taking notes. The war in Ukraine has echoed in the island state of Taiwan, which is constantly in the shadow of China and subject to an escalating series of provocations from the mainland. The leadership in Beijing, not dissimilarly from Putin's stance on Ukraine, view Taiwan as an illegitimate state bound to return to the Chinese fold.

To Taiwan, Ukraine's defiance of Russia is a source of inspiration and a template for their own survival. "Ukraine showed very great determination to defend their territory and it's clear that Ukrainians have a very resilient civil society, which helped resist invasion," Taiwanese Deputy Foreign Minister Ming-Yen Tsai told me on the sidelines of a major international security conference in Halifax, Canada, last month. He added that watching Ukraine's struggle has inspired Taiwan to implement major long-term military reforms, including extending the period of compulsory military service expected of its citizens.

While a Chinese maritime invasion of Taiwan would look very different than Russia's land campaigns in Ukraine, Taiwanese officials have seized the moment as one to galvanize international support for their cause and sound the alarm over the challenges confronting them.

"We are already facing warfare without gun smoke on a daily basis," Tsai said, pointing to China's "hybrid warfare" tactics, its use of escalating forms of military intimidation through naval exercises and aerial incursions, as well as cyberstrikes and online disinformation campaigns.

"If we do not hold ground at this point," Tsai said, "China will test the bottom line, step by step, to create a new normal, and step by step, keep changing the status quo" until Taiwan's sovereignty will be all the more fragile.

The experience of Russia's invasion of Ukraine, Tsai said, "shows that authoritarian countries have no qualms invading other countries' territory, revising national borders and challenging the rules-based international order." He added that, for Taiwan, the lesson is to prepare now for an invasion rather than when it's too late.