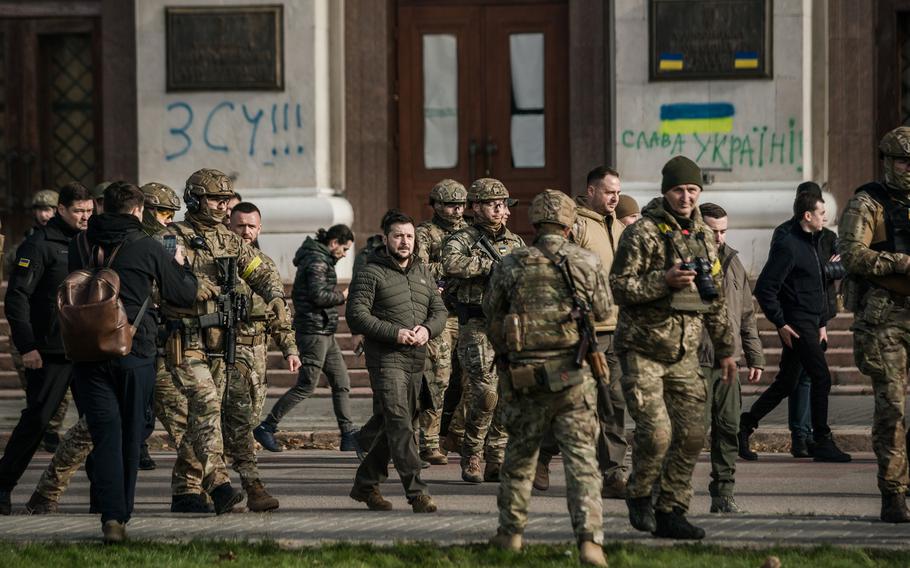 After nine months of death and destruction, the key to Russia’s war against Ukraine lies in the craggy, sea-swept peninsula of Crimea — with its limestone plateaus and rows of poplar trees — which Russia illegally annexed in 2014.

It was in Crimea in February 2014, not February 2022, that Russia’s invasion and occupation of Ukraine began. And Ukraine President Volodymyr Zelenskyy insists that only by retaking Crimea will the war end, with Ukraine defeating its Russian invaders.

“Its return will mean the restoration of true peace,” Zelenskyy declared in October. “The Russian potential for aggression will be completely destroyed when the Ukrainian flag will be back in its rightful place — in the cities and villages of Crimea.”

But for Russian President Vladimir Putin, the annexation of Crimea has become a pillar of his legacy, which would crumble if he loses the peninsula. Putin has indicated that any effort by Ukraine to retake Crimea would cross a red line that he would not tolerate.

The West, while backing Ukraine, fears that any Ukrainian military incursion into Crimea could incite Putin to take drastic action, potentially even the use of a nuclear bomb. Some Western officials hope that a deal relinquishing Crimea to Russia could be the basis for a diplomatic end to the war. Ukrainians dismiss that idea as dangerously naive, while Russians say they will not settle for what is already theirs.

The unwavering claims to Crimea illustrate the intractability of the conflict, and it is hard to imagine the fight over the peninsula will be resolved without further bloodshed.

It was a shocking attack in early October on the Crimean Bridge — a $4 billion symbol of Putin’s imperial ambitions in Ukraine — that the Kremlin says triggered Moscow’s unrelenting bombing campaign of Ukraine’s critical infrastructure that now threatens to tip the country into a humanitarian crisis.

And following Kyiv’s liberation of Kherson — which Moscow vowed would be “Russia forever” — Russian officials have stepped up their rhetoric. Former president Dmitry Medvedev promised a “judgment day” in the event of any attack on Crimea, while a member of Russia’s parliament warned of a “final crushing blow.”

Ukraine, meanwhile, is developing detailed plans for the reintegration of Crimea, including the expulsion of thousands of Russian citizens who moved there after 2014.

Russia has its own maximalist view, demanding the surrender of four other Ukrainian regions — Luhansk, Donetsk, Zaporizhzhia and Kherson — that Putin has also declared, illegally, to be annexed.

The refusal by either side to back down threatens to turn the war into a decades-long conflict, much like the territorial standoffs over the West Bank and Gaza, Nagorno-Karabakh, or Kurdistan.

Crimea has been fiercely disputed for centuries. The Greeks, Mongols and Ottoman Turks all laid claim to this jewel of the Black Sea. Russia and the Ottoman Empire fought wars over it before Catherine the Great annexed Crimea in 1783, absorbing it into the Russian Empire.

During the Soviet Union, as in czarist times, Crimea became a favorite holiday resort for the Russian elite. Stalin brutally repressed the Crimean Tatars, the peninsula’s predominantly Muslim indigenous group, deporting some 200,000 to Central Asia and Siberia after accusing them of collaborating with Nazi Germany. That persecution would shape the peninsula’s politics for decades.

In 1954 — ostensibly to mark the 300th anniversary of a treaty joining Ukraine to Russia, but also for key economic reasons — Soviet leader Nikita Khrushchev transferred Crimea from Russia to Ukraine.

After the dissolution of the Soviet Union, Crimea became an autonomous region of Ukraine, obligated to Kyiv, but with its own constitution and Ukrainian, Russian and Crimean Tatar as its official languages.

The 1990s were marked by squabbles between Kyiv and Moscow, spurred in part by the Kremlin’s demand to maintain its Black Sea Fleet at Sevastopol, which it did under long-term lease. But a sense of resentment toward Kyiv festered among Crimeans. The peninsula struggled economically. Many residents, overwhelmingly ethnic Russians, felt neglected and nostalgic for Soviet times.

In 2014, days after Ukrainian President Viktor Yanukovych fled in response to the Maidan Revolution, Russian forces invaded Crimea. Russian-backed authorities quickly organized an illegal referendum on annexation, which was accomplished in a swift process that Putin hoped to repeat this year by conquering Kyiv.

The annexation was hugely popular in Russia, and Putin’s approval ratings shot up. “Much of the imperial projection of Russia, its entire founding myth, centers on Crimea,” said Gwendolyn Sasse, an analyst at Carnegie Europe.

“In people’s hearts and minds, Crimea has always been an inseparable part of Russia,” Putin said in a speech at the time. The annexation, however, was a violation of international law, and Western nations quickly imposed punishing sanctions.

For eight years, the fate of Crimea was overshadowed by the war in Ukraine’s eastern Donbas region that was stoked by pro-Russian separatists. But Zelenskyy started formulating a de-occupation and reintegration plan for Crimea long before Russia’s full-scale invasion in February.

In 2021, his government established an annual summit called the Crimea Platform, intended to keep Crimea in the international spotlight. Tasheva, a Crimean Tatar, became Zelenskyy’s representative to Crimea in April, and now leads a team of 40 people working on a blueprint for reversing the annexation.

“It is imperative that Ukraine has a step-by-step plan ... ready to go,” Tasheva said in an interview, noting a long list of complex issues related to transitional justice and citizenship.

An estimated 100,000 residents fled Crimea after Russia’s annexation, but the vast majority stayed and were joined by hundreds of thousands of Russians encouraged to settle there. Since 2014, Russian authorities have issued passports to many of the peninsula’s 2.4 million citizens.

Tasheva said the Crimeans who stayed “had the right to do so” and that after de-occupation, efforts would be made to distinguish between those who actively collaborated with the Russian authorities, and those who perhaps voted for annexation but became what Tasheva calls “victims of propaganda.”

“These people didn’t commit crimes,” she said. “They just had their opinions.”

Rory Finnin, associate professor of Ukrainian Studies at the University of Cambridge, said a compromise was unlikely.

“The idea that somehow Ukraine should just go back to the status quo post-2014 is foolish because all that will happen is another escalation,” Finnin said. “It is hard to imagine Ukrainians being comfortable with giving up this territory, knowing this means the abandonment of millions of people. The moral and geopolitical stakes of such an abandonment are grave.”

Russia, too, is intent on maintaining its grip on Crimea, raising concerns among Western officials about the extreme measures Putin might take to hold it.

Nikolay Petrov, a senior research fellow at Chatham House, the London-based policy institute, said that Putin relinquishing Crimea was “absolutely out of the question” and that Zelenskyy’s loudly articulated reintegration policies were among the “triggers” for Putin’s invasion.

“The creation of the Crimea Platform and the permission given by the West to play this card, started a very dangerous game,” Petrov said. “Finally it led to this war.”

In a recent interview, Lord David Richards, a former chief of staff of the British army, said Ukraine would risk nuclear war to defend Crimea. “If you rub Putin’s nose in it, he can do something very silly,” Richards told Times Radio. “He can use tactical nuclear weapons.”

Still, some Western officials hold out hope that a deal on Crimea could be the key to ending the war, and said they believed that Zelenskyy and his advisers were more open to potential concessions than their rhetoric has suggested.

During initial peace talks in March, Kyiv signaled it would be open to separate negotiations on the status of Crimea, raising the possibility that Zelenskyy might be open to treating Crimea differently than other Russian-occupied areas of Ukraine that he insists must be returned.

“There could be some arrangement over Crimea, a properly monitored and executed referendum, perhaps a sort of Hong Kong deal whereby it’s allowed to remain in Russian hands for a number of years,” Lord Richards said.

Eight years on, Crimea is isolated by international sanctions. Its airport, once a hub for summer travelers from across Europe and beyond, now offers flights only to mainland Russia.

The Kremlin initially poured money into local infrastructure projects, including the Crimean Bridge, as well as pension schemes. It also imposed Russian state propaganda as the principal source of information. Though Russian tourists returned, the peninsula has struggled economically and is now led by a repressive, Moscow-installed government. Crimean Tatars, in particular, have faced persecution.

Given limited access to Crimea, and the domination of Russian state media, it is difficult to gauge the public opinion there, and whether it has shifted in response the war.

Still, many believe that the war that began in Crimea must end with Crimea.

“The question of Crimea, which I thought before the war would take decades to resolve, today is unambiguous,” said Mikhail Khodorkovsky, the former Russian oil tycoon and longtime Putin critic. “It is difficult to imagine a real end to the war without the return of Crimea to Ukraine.”

The Washington Post’s Missy Ryan contributed to this report.