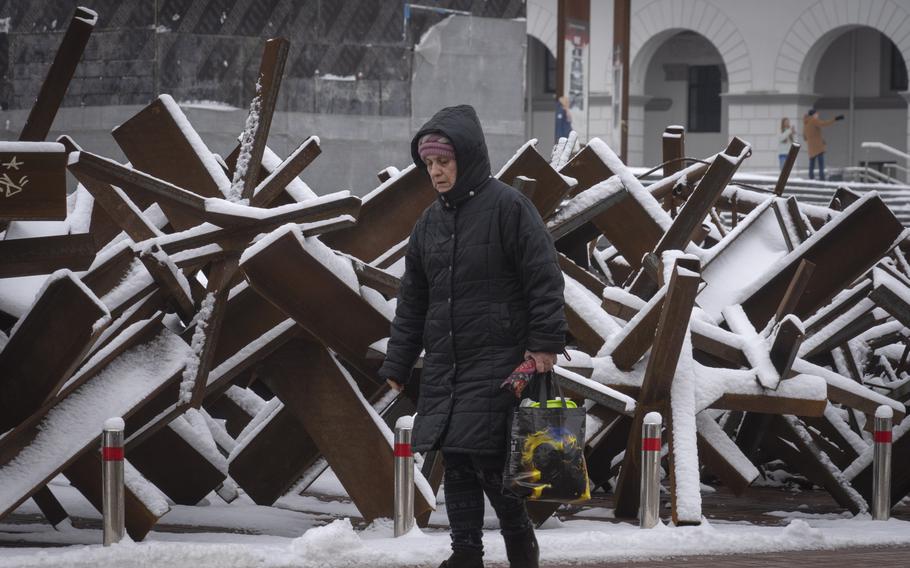 A woman passes by anti-tank hedgehogs in central Kyiv, Ukraine, Monday, Dec. 12, 2022. Ukraine has been fighting with the Russian invaders since Feb. 24 for over nine months. The mayor of Kyiv is reporting multiple explosions, Wednesday, Dec. 14, 2022, in the Ukrainian capital, the first such time in weeks during Russia’s ongoing war against the country. (Efrem Lukatsky/AP)

KYIV, Ukraine — Ukrainian authorities reported explosions in the capital, Kyiv, on Wednesday, saying two administrative buildings were hit in a downtown district that is home to many government buildings.

Vitali Klitschko wrote in a post on Telegram that municipal teams were in place after the blasts, and officials said the attack involved Iranian-made Shahed drones like those that Ukrainian authorities say have been involved in other Russian strikes in the country.

Shrapnel from a drone damaged two administrative buildings in the central Shevchenkyvskyi district, the Kyiv city administration said on its Telegram channel. It was not immediately clear whether there were any casualties.

The reported attacks come as Ukraine has faced a barrage of Russian air strikes across the country, largely targeting infrastructure, in recent weeks as well as continued fighting along the front lines in the eastern and southern regions.

Ukrainian President Volodymyr Zelenskyy pressed Western leaders as recently as Monday to provide more advanced weapons to help his country in its war with Russia. The Patriot would be the most advanced surface-to-air missile system the West has provided to Ukraine to help repel Russian aerial attacks in the war between the countries that erupted with Russia's invasion of Ukraine on Feb. 24.

U.S. officials also said last week that Moscow has been looking to Iran to resupply the Russian military with drones and surface-to-surface missiles.

Ukrainian authorities said that during the latest round of volleys on Dec. 5, more than 60 of 70 strikes were intercepted by air defense systems.