Maryan Zablotskyy, a member of Ukraine’s parliament, seen in Kyiv on Dec. 8. Zablotskyy grew up as a fan of President Ronald Reagan and has been reaching out to U.S. Republicans, who are increasingly skeptical of giving aide to Ukraine. (Anastasia Vlasova/for The Washington Post)

KYIV, Ukraine — The seven-foot-tall bronze statue of Ronald Reagan bursting through the Berlin Wall was supposed to be here by now, standing in one of the Ukrainian capital's prominent public squares.

The monument was the brainchild of Maryan Zablotskyy, who grew up venerating Reagan in Lviv in western Ukraine — as many did in the post-Soviet years. Zablotskyy founded the Ayn Rand Center Ukraine to promote the libertarian author and covered his office walls with posters of Reagan, Margaret Thatcher and Winston Churchill, with their quotes translated into Ukrainian.

Now a member of his country's parliament, Zablotskyy, 37, faces the prospect that the party of his favorite politician could turn against Ukraine in its moment of greatest need — under invasion and relentless bombing by Russia, with about one-fifth of its land occupied and its economy in tatters.

In Washington, congressional Republicans, who are about to take control of the House, have vowed to bring more scrutiny to the Biden administration's requests for aid to Ukraine. Some have voiced skepticism about continuing assistance to Ukraine; others may obstruct the aid packages as part of a broader effort to thwart President Joe Biden's agenda ahead of the 2024 presidential election.

On Monday afternoon, Zablotskyy stood by the 164-foot Arch of Freedom in Kyiv's Pecherskyi district, initially built in 1982 to symbolize the strength of the ties between Ukraine and Russia and called the People's Friendship Arch. Earlier this year, Ukrainian officials renamed the monument to strip it of its Soviet past, and the Reagan statue will be placed here after the war ends.

"What I can do is explain that Ukraine is important to the whole world, and that we fight for values and ideals that should be equally important to both parties," Zablotskyy said in an interview.

After Republicans won a slim House majority in the midterm elections, many of the right's most powerful advocacy groups released a memo urging Congress "not to rush" through Biden's proposed Ukraine aid package, even as Ukraine's leaders clamor for immediate help.

Amid these divisions, some House Republican leaders are considering demanding that Biden agree to GOP-backed spending cuts in exchange for Ukraine funding, said Stephen Moore, an economic adviser to congressional Republicans.

That could complicate the aid packages by tying them to policy changes — such as reversing Biden's plan to spend more on clean energy — that Democrats will reject. The White House is hoping to win approval of its latest request for $38 billion in aid for Ukraine before Republicans take control of the House in January.

"It's a very contentious issue inside the caucus right now," Moore said. "Everything is going to have to be paid for from here on out, and that will be a big fight because Democrats won't want to have to cut domestic programs for aid to Ukraine." 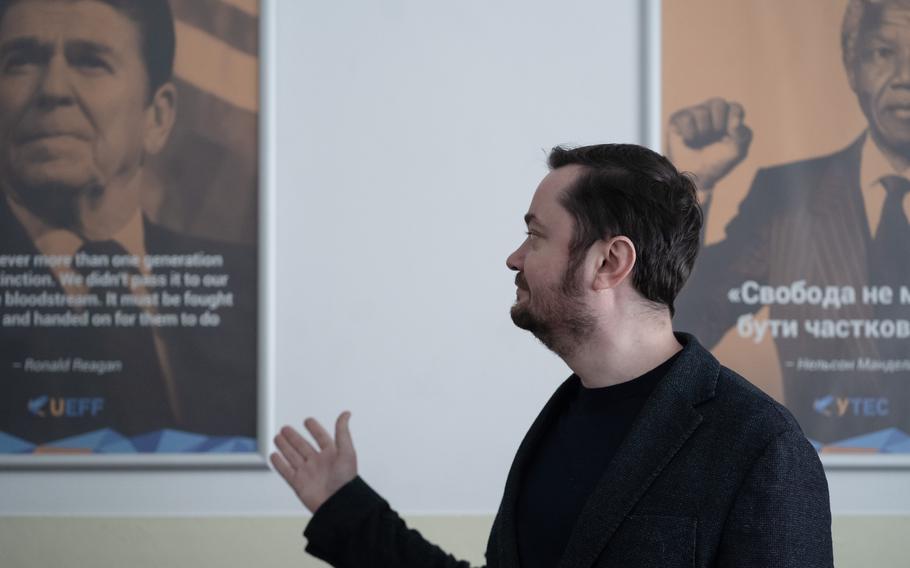 Zablotskyy points to a poster of Ronald Reagan in his office in Kyiv. (Anastasia Vlasova/for The Washington Post)

Conservatives in the United States who support Ukraine say they see Zablotskyy as almost uniquely suited for making Kyiv's case to the new House Republican majority.

For more than a year, Zablotskyy has made presentations once every other week at "the Wednesday meeting," a coalition of leading conservative organizations led by Grover Norquist, president of Americans for Tax Reform, an anti-tax organization. Zablotskyy has spoken to more than a dozen lawmakers and has close ties with conservative think tanks and advocacy groups such as the Atlas Network.

In November, Zablotskyy launched a program with the Republican mayor of Miami to send weapons confiscated by U.S. police to Ukrainian citizens — part of his goal of bringing America's Second Amendment culture to Ukraine. He secured $100,000 worth of donations last month from two conservative gun rights donors to purchase firearms for Ukraine, as well as a donation of 150,000 bullets. (Zablotskyy declined to name the donors, saying they want to remain anonymous.)

As a boy, Zablotskyy watched his parents carry their blue-and-yellow flags to street protests in 1990, as the Soviet Union's collapse gave Ukraine its independence. He was too young to remember Reagan's presidency, but he learned of the politician as a child and came to revere him.

"Maryan can speak directly to the commitment for freedom in Ukraine that resonates with those who believe in Ronald Reagan's worldview," Norquist said in an interview. "This is really the person who has met regularly with the broad center-right movement."

Ukrainian President Volodymyr Zelenskyy, another famous actor turned politician, partially "modeled his political image on Ronald Reagan," according to Andriy Gerus, chairman of the energy committee in Ukraine's parliament. In his inaugural address in 2019, Zelenskyy quoted Reagan saying "government is the problem."

But Zablotskyy's affinity for American conservatism is not shared universally in Ukraine. Many Ukrainian politicians hope to align their country with the moderate democracies of the European Union, which they plan to join, and have little affinity for Republican ideas on guns, economics or other policy questions, said Nazar Zabolotnyi, an analyst at Centre of United Actions, a Ukrainian nonprofit group dedicated to nonpartisan policy analysis.

"Ronald Reagan is a role model for many Ukrainians, but I think it's more about understanding the danger of Russia and not so much Reagan's ideology," Zabolotnyi said. "You don't find a lot of people here who will say to you, 'I'm a Reagan supporter.'"

GOP voters, for their part, seem increasingly lukewarm about Ukraine. About 50 percent of Republicans supported giving economic aid to Ukraine in a survey conducted by the Chicago Council on Global Affairs last month, down from 64 percent in July and 74 percent in March.

A Wall Street Journal poll released in November found that about 48 percent of Republican voters believe the United States is doing too much to assist Ukraine, an increase from just 6 percent in March.

David Arakhamia, a friend of Zablotskyy's who serves as a leader in Ukraine's parliament, said he believes Republicans will support Ukraine but pointed to comments by Rep. Kevin McCarthy (Calif.) — who is aiming to become House speaker after Republicans take control of the chamber in January — about rejecting "blank checks" for Ukraine as a cause for concern.

"They are worried about the Trump-wing rhetoric — 'no more blank checks,' all this stuff about weapons on the black market," Arakhamia said, alluding to allegations in conservative media that U.S.-provided weapons to Ukraine have gone missing. "People are getting worried because it can really dramatically affect the war scene."

Zablotskyy remains confident that the U.S. party he identifies with will ultimately deliver for Ukraine. But, he noted, Ukrainians need to make clear that they do not take U.S. support for granted. "We have to do our part to show how much we appreciate it," he said.