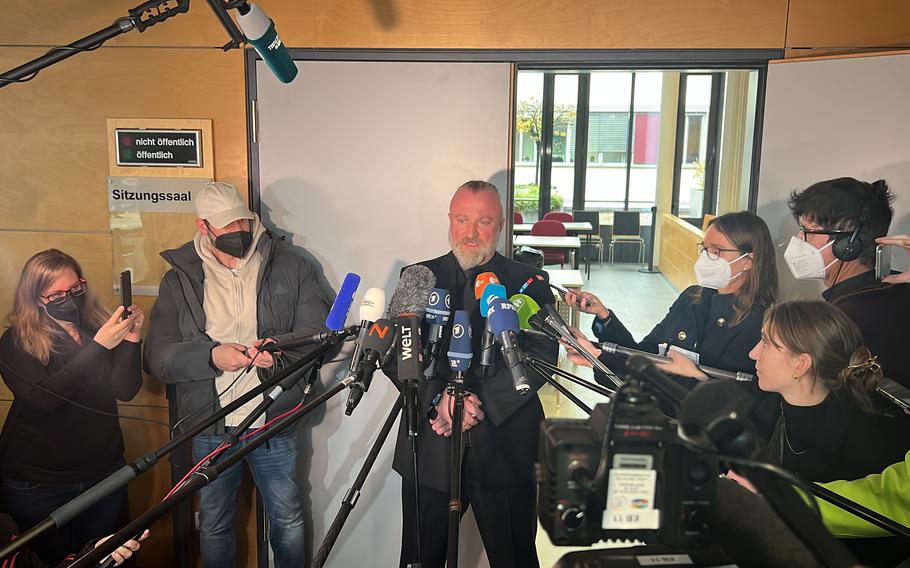 Christian Kessler, lawyer for defendant Florian V., in the murder case of two German police officers near the U.S. Army's Baumholder training grounds, addresses reporters after the sentencing hearing at district court in Kaiserslautern, Germany, Nov. 30, 2022. Kessler's client, who initially stood accused of aiding in the killing of the officers, was found guilty of poaching but was found not to have pulled a trigger during the Jan. 31 shooting. (Alexander Riedel/Stars and Stripes)

KAISERSLAUTERN, Germany — A German poacher was convicted Wednesday of first-degree murder and sentenced to life without parole in the January slayings of two police officers near the U.S. Army base in Baumholder.

The Kaiserslautern district court found Andreas Johannes Schmitt, 39, guilty of gunning down Yasmin Bux and patrol partner Alexander Klos in what is widely considered the most brutal murder of police officers in Germany’s recent history.

His accomplice and co-defendant, a 33-year-old identified only as Florian V., was found guilty of assisting in poaching but did not receive a sentence.

According to prosecutors, the two defendants on Jan. 31 were illegally hunting deer and wild boar south of the military training ranges.

Using illegal thermal imaging and targeting technology, Schmitt located wildlife from the cab of his purpose-built box van, which he referred to as the “Schmittmobile,” and opened fire from the driver’s seat. 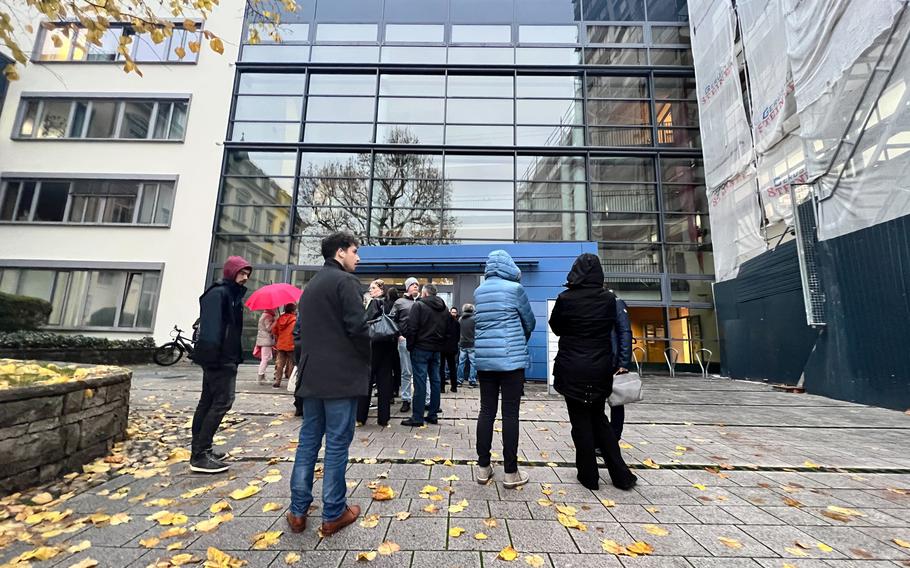 “Mr. Schmitt prided himself on his 98.2% accuracy rate and his ability to kill animals by headshot,” chief district judge Raphael Mall said in announcing the verdict.

Prosecutors said in March that poaching provided a large amount of untaxed income for Schmitt, who was more than $2 million in debt from business failures.

While shooting the officers, Mall said Schmitt proceeded precisely according to his hunting habits.

“’Headshot, like always,’” Mall said, quoting a text message between Schmitt and fellow hunters describing one of Schmitt’s hunting successes. “You could call this his modus operandi … only this time his prey were humans.”

Prosecutors said Schmitt’s motive for the killings was his desire to protect his lucrative source of income from illegal hunting.

Florian V.’s job was to find and retrieve the animals so Schmitt could “keep down his pulse and breath for a better aim,” the judge said during Wednesday’s proceedings. Andreas Johannes Schmitt, 38, shown here in a social media photo shared by police during the search for Schmitt, was convicted of murder Nov. 30, 2022, related to the shooting of two German police officers not far from the U.S. base in Baumholder, Germany, Jan. 31. (German police)

By 4 a.m. on Jan. 31, the pair had poached 22 animals and were stopped on the district road between Mayweilerhof and Ulmet in the Kusel district to load the 23rd carcass, which was supposed to be the last kill of the night.

As the two were about to start their journey home, they saw the approaching headlights of the officers’ patrol car.

Klos, 29, and Bux, 24, who was nearing completion of her police training, stopped on the dark country road to investigate.

Schmitt overheard the radio call and made a snap decision to act, according to the court. Grabbing his concealed shotgun, he fired directly at Bux’s head and she fell to the ground.

He then shot Klos in the buttocks. The officer managed to fire his service pistol at Schmitt but missed because of the darkness and injury.

Schmitt then switched to his hunting rifle and took aim with his thermal scope three times, eventually killing him with a fourth shot to the head at close range.

Florian V. told investigators that he hid in the ditch next to the vehicle during the murders. A roadside memorial along country road K22, near Ulmet, Germany, memorializes the deaths of police officers Yasmin B. and Alexander K., as seen on May 11, 2022. Andreas Johannes Schmitt was sentenced by a Kaiserslautern court to life imprisonment Nov. 30, 2022, for the Jan. 31 killings. (Alexander Riedel/Stars and Stripes)

Schmitt then noticed that Bux was still alive, so he grabbed his shotgun and fired a fatal shot to the head, prosecutors said.

“I’m not apologizing for my behavior. I’m asking for understanding,” he said Nov. 22, according to the newspaper.

Judges dismissed his claim that he had acted in self-defense and ruled that because of the severity of the crime, he will not be automatically eligible for parole after 15 years.

The help that Florian V. gave investigators was taken into account in the verdict and sentencing.

“We accepted the verdict (and will not appeal), which is a signal that we’re very happy,” Florian V.’s lawyer, Christian Kessler, said Wednesday. “My client was arrested on suspicion of two murders and today walked away without punishment.”

Schmitt’s defense did not provide a statement or answer questions following the verdict.

Fatal attacks on police are rare in Germany, and the killings of the two young officers prompted widespread outrage and condemnation.

"In a few weeks, it will be a year since Yasmin Bux and Alexander Klos were torn from their lives in a still unbelievable way,” Uwe Lederer, the director of the Rheinland-Pfalz Police University, said in a statement Wednesday. “This terrible act hit us deeply. Yasmin and Alexander will remain in all of our memories.” 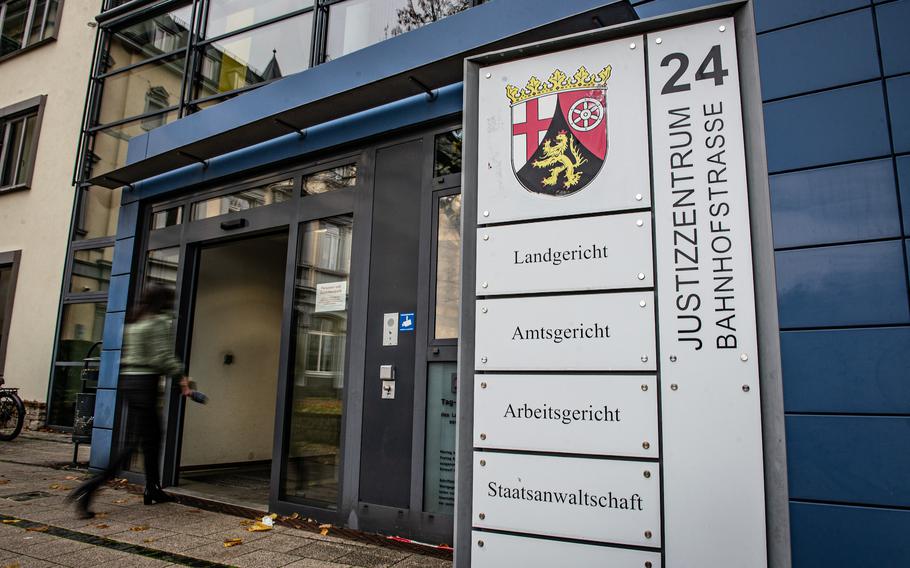 The Kaiserslautern district court main entrance as seen on Nov. 30, 2022. Andreas Johannes Schmitt was sentenced here to life imprisonment for the Jan. 31 killings of two police officers, which happened on a road near the U.S. Army's Baumholder training grounds. (Alexander Riedel/Stars and Stripes)