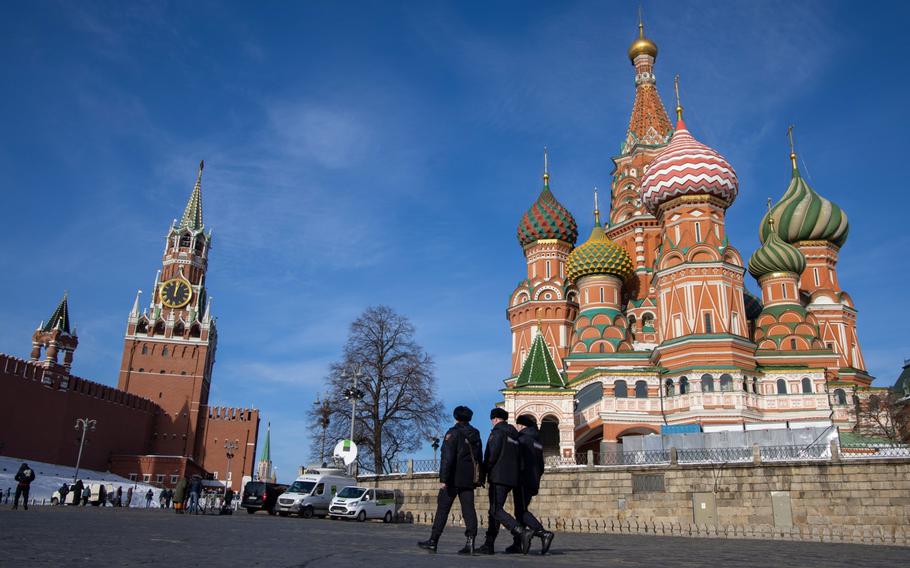 Although Russian President Vladimir Putin and his defense minister, Sergei Shoigu, proclaimed the completion of their mobilization of 300,000 new soldiers, many fighting-age Russian men remain in hiding — still fearful of being seized by military recruiters and sent to fight, and die, in a failing war.

While records of border crossings to neighboring countries documented more than 300,000 who left Russia in the weeks after the start of mobilization, there is no data on the number of men who hid inside the country, but the number is also believed to be in the thousands.

Among them is a young IT worker in southern Russia, now living in a tent in the forest.

Like others eligible for military service, the IT worker quickly began planning to run after Putin issued his mobilization decree on Sept. 21 — frantically checking outbound flights, which spiked in price every time he hit the refresh button.

Then, he had an epiphany: If he couldn't afford to flee Russia or leave his family and friends behind, he could at least escape civilization and the state's military conscription system. So, he took a week off from work and drove to hide in the woods.

"I feared that I'd get drafted if I go to the store or that someone will come to my house," the IT worker, who shares his experiences on a Telegram blog under the pseudonym Adam Kalinin, said in a phone interview. He requested anonymity because he is hiding from the authorities.

The Washington Post interviewed five other men who have spent recent weeks hiding in rented apartments, country houses, and even a music studio. Some were interviewed by phone, others agreed to be visited by a photographer in their places of hiding. Although they come from different backgrounds, professions, and family circumstances, they expressed an identical goal: to avoid killing, or being killed, in Ukraine.

In the interviews, most said that they still don't feel safe from Putin's war machine, and they each requested anonymity to avoid being identified by the authorities.

"I'm not rushing to go back to normal lifestyle," said a 38-year-old lab technician who was ambushed by a group of police and enlistment officers who handed him a summons at his home in late September.

He did not sign it and decided not to show up at the assembly point the next day, as demanded. Instead, he hid at a cottage house outside Moscow, while notices piled up on his apartment door.

Eventually, he had to return to the city for work but swapped his car for a bike to avoid traffic police and wore a mask, wary of Moscow's vast CCTV network with built-in facial recognition system.

"I didn't have a place to flee to, nor a way to work remotely," he said when asked whether he considered going abroad. Having served in the Russian military before, the lab technician said he wants to avoid experiencing that again, but said he doesn't feel "unambiguous support for either side" in the war.

The IT worker and his wife were always avid campers, so he had most of what he needed to evade the enlistment officers: a sleeping bag, a saw, a gas burner. He also bought solar panels, a tent for winter fishing and a satellite dish to keep working online.

Shoigu's public statements that the mobilization was finished brought little peace of mind to the IT worker or other Russian men in hiding. No legal decree has been issued formally ending the conscription drive.

So the IT worker, who calls himself pacifist, is now living his second month as an antiwar recluse.

For the IT worker, his daily commute is now walking three minutes from his "home" to his "office" — a separate tent set higher in a clearing, the only location nearby with a relatively stable internet connection.

He cooks on an open fire and said he misses hot showers and fresh fruit but that his living conditions were still far better than those of mobilized men sent to Ukraine. Hundreds of Russia's new conscripts, many poorly equipped and given little training, have already been killed, according to Russian media — reinforcing the IT worker's decision to stay in hiding.

"The very first news that came out of mobilization is how people are missing basic gear, or the conditions they are in," he said, referring to reports of senior officers forcing new soldiers to buy their own bulletproof vests or sleep in dilapidated, unheated barracks.

"They are suffering even before they get to the front line and can easily get, say, pneumonia, and no one will care, which put it into perspective for me," he said. "I'm either mobilized and put into something akin to a prison, where you have no rights, just obligations, or I stay here, where I still have many problems and issues, but I am free."

With Russia's casualties continuing to climb and troops inevitably requiring rotation, there is little doubt additional reinforcements will be needed.

"For how long the hundreds of thousands of mobilized servicemen have been sent to the Armed Forces is unknown," Pavel Chikov, a lawyer with Agora, a human rights group, wrote on Telegram. "Sooner or later … either because of death, injury and other reasons their places will need to be filled with recruits."

A 24-year-old financial consultant from Moscow was a key target for enlistment officers because of his prior service as a special operations soldier, and they tried hard to track him down, he told The Post.

First, the apartment door at his declared address — all Russians are required to register with the authorities — was plastered with draft notices. The financial consultant, who lives elsewhere, never picked them up.

Then, the local commissariat sent a notice to his office. Under Russian law, employers are obliged to hand them to staff, or risk hefty fines. Instead, his company fired him on paper but allowed him to work remotely in an unofficial capacity.

Days before the mobilization was supposed to end, military recruiters went to the apartment with a police escort and questioned the tenants living there about the ex-soldier's whereabouts.

From the start of mobilization, the financial consultant, who graduated from a naval academy, said he knew he would be summoned. "I wore the uniform for six years," he said. "So I already prepared myself for this."

When Putin issued the degree, his family wanted him to flee to Kazakhstan but he refused to leave, fearing he would get stopped at the border or worse — labeled a deserter. His former military colleagues were also bombarded with notices.

But the consultant said he was not willing to fight and die in a pointless conflict.

"I think this is absolutely not my war, and there is nothing for me to do there," he said. "Knowing the mechanics of the military, it's gruesome to realize how many civilians are dying." He added, "On a political level, I don't even get involved there and I don't even want to know what they are fighting for there. But on a personal, moral level I don't want this to be happening."

He went into hiding at a dacha, or country house, then rotated through several friends' apartments in the Moscow region. "I avoided all public transport," he said. "I refused to go to the office under any circumstances, and you wouldn't see me in public places." After Putin declared the mobilization complete, the consultant returned to his rental apartment but still keeps a low profile.

A 40-year-old music producer in Moscow, who underwent military training in university, also had enlistment officers repeatedly bang on the door of an apartment he owns but rents out.

"I am against the war, I've never hit anyone in my life," the producer said, sitting in a dimly-lit room of his music studio adorned with Soviet paraphernalia. "When issues are being solved through violence, this is the most primitive way, a return to the animal state."

The producer moved away from his wife and children and spent nights on a couch in the studio, rattled after hearing that his friend, also in hiding, got handed a notice by police who stopped his car.

Most of the producer's friends left Russia, and his wife pleaded with him to follow suit, even threatening to divorce him. But he refused, saying he would not let Putin "steamroll" the life he built in Moscow.

"I've never held onto Russia, I always considered myself a man of the world," the producer said. "But when the war began, that somehow reversed my thought process. … I've decided that I am not running away. I am a full-fledged resident of this country and because someone went off the rails, this does not mean I should give up my house, my convictions and my work."

He continues to live "outside the system" — avoiding the subway, crossing the street if he sees anyone in a uniform and mostly keeping his phone off to avoid being tracked. "I think you have to pick a strategy of maximum security if you have decided to stay here," he said. "The situation can turn for the worse. The rumor is there will be a second enlistment wave, then maybe a third."