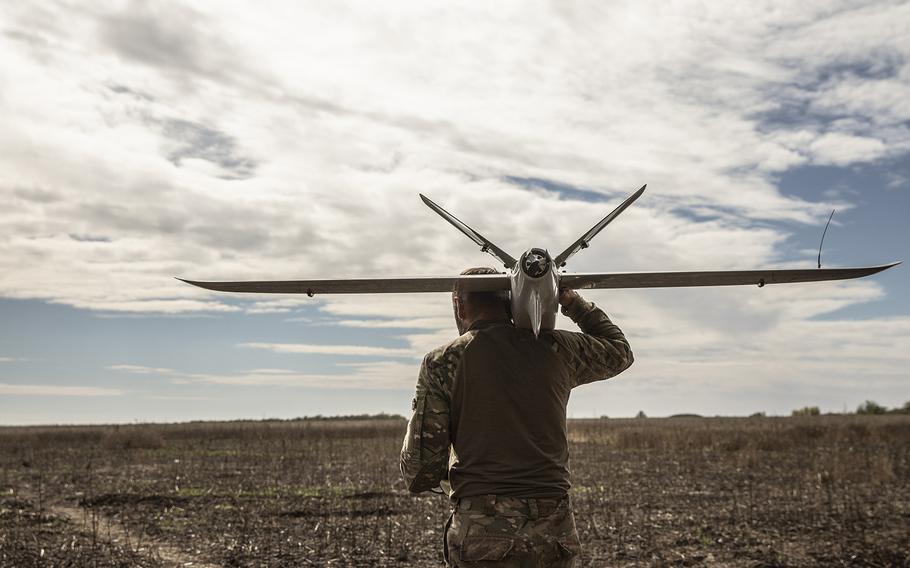 A Ukrainian soldier who goes by the call name “Viter” carries a Leleka-100 drone about to be launched, and carefully navigates his way through a field on Thursday in the Kherson region, Ukraine, seeded with Russian mines. (Heidi Levine for The Washington Post)

KYIV, Ukraine - Elon Musk said Friday that his space company could not keep funding the Starlink satellite service that has kept Ukraine and its military online during the war, and he suggested he was pulling free internet after a Ukrainian ambassador insulted him on Twitter.

A Starlink cutoff would cripple the Ukrainian military's main mode of communication and potentially hamstring its defenses by giving a major advantage to Russia, which has sought to jam signals and phone service in the eastern and southern combat zones.

The world's richest man by Bloomberg estimates, Musk tweeted from the United States that his company, SpaceX, does not want reimbursement for its past expenses in helping Ukraine. But, he tweeted, it "also cannot fund the existing system indefinitely and send several thousand more terminals that have data usage up to 100X greater than typical households. This is unreasonable."

He also taunted Ukraine's ambassador to Germany, Andrij Melnyk, who had some choice words for Musk last week after the Tesla chief executive tweeted a proposal to end the war in Ukraine that would favor Russia.

"F--- off is my very diplomatic reply to you @elonmusk," Melnyk said at the time.

"We're just following his recommendation," Musk tweeted early Friday. The ambassador declined to comment on Friday, while his press representative told The Washington Post his previous comment had been a specific response to Musk's tweet about peace negotiations.

Starlink, a unit of Musk's SpaceX company, uses terminals equipped with antennas that are usually mounted on roofs to access the internet via satellite in rural or disconnected areas.

Ukrainian forces have used it to live-stream drone feeds, correct artillery fire and contact home since Musk began sending terminals earlier in the war as Ukraine faced the threat of internet outages from Russian strikes and cyberattacks. One Ukrainian commander said Friday that "fighting without Starlink service at the front line is like fighting without a gun."

Ukraine has received thousands of antennas from Musk's companies and European allies. The system has proved "very effective," the country's minister of digital transformation, Mykhailo Fedorov, told The Post in a March interview.

From tweets on Taiwan to the rap star Ye, Musk's remarks have raised alarm about what he could do with Twitter if he comes to own the platform.

The latest scrutiny came this month when Musk declared his proposal, a four-point plan that could help the Kremlin lock in territorial gains and included Ukraine forgoing aspirations to reclaim Crimea, which Russia controls since annexing the peninsula in 2014.

In a jab at the billionaire's Twitter peacemaking attempt, Ukrainian President Volodymyr Zelensky tweeted a poll asking his followers which Elon Musk they preferred: "One who supports Ukraine" or "One who supports Russia."

Before the peacemaking foray that set off an online firestorm, and the tweets in question, SpaceX had already warned the U.S. Defense Department that it could no longer afford funding the Starlink system in Ukraine in a letter dated Sept. 8, CNN first reported Thursday.

The report said the letter asked the Pentagon to cover a new request from Ukraine and costs for the rest of the year, acknowledging that others, including Kyiv's allies, had also helped fund the terminals sent so far.

A senior U.S. defense official confirmed late Thursday that Musk had privately urged the Pentagon to pay up. The official said there was no comparable system with such widespread applicability. The bill is likely to run into the hundreds of millions of dollars over the next year, the official said, speaking on the condition of anonymity because of the sensitivity of the issue.

The official described it as a scenario in which Musk "dangles hope over the heads of millions, then sticks the DoD with the bill for a system no one asked for but now so many depend on."

"We do not have anything else to add at this time," he said in a statement.

Musk said Friday that the Starlink operation in Ukraine has cost SpaceX $80 million and that it would reach $100 million by end of year, including the expense of providing terminals, maintaining satellites and ground stations and other costs. "We've also had to defend against cyberattacks &amp; jamming, which are getting harder," he wrote.

The Ukrainian military has become dependent on Starlink to quickly share information with senior commanders. Roman Kovalenko, a company commander in the 72nd Mechanized Brigade fighting on the front line in the eastern Donetsk region, said units use radio less now because they're not as dependable.

"I honestly have no idea how the communication between us will look like here without any Starlink service," he said.

The satellite internet is especially helpful for the Ukrainian military's expanded use of drones. With a stable connection, air reconnaissance units can watch their drone feed, allowing artillery forces to identify targets and correct their fire in real time. Before that, Kovalenko said, infantry soldiers in trenches had to locate the artillery strikes themselves, which was less effective and put them in danger.

"I'd say the effectiveness of our work without Starlink would drop something like 60 percent or more," Kovalenko said. "And we would have to use more ammunition, which we are now saving."

He and others said they had experienced some outages near the front line in recent weeks, but one soldier in an air reconnaissance unit called them "insignificant." Another drone unit in the southern Kherson region was able to work only a short distance into recently reclaimed territory before its Starlink stopped working.

A 25-year-old junior sergeant who uses the call sign Vognyk said Ukraine's military and volunteers would pay for the service themselves if necessary. "In my opinion, this is his right, his property," he said of Musk. "We can thank him for the number of Starlinks he provided to Ukraine."

After Ukrainian troops recaptured the city of Izyum in the northeastern Kharkiv region in recent weeks, residents crowded around a Starlink system that was brought so they could get some connection until the mobile network was restored there.

In his brigade, Kovalenko said, soldiers often visit his position to use his Starlink to connect to the internet and send their families a quick message that they're alive and well.

"I hope even if the situation would not be resolved officially, our volunteers would fundraise the money needed to pay for this service," he said. "We need Starlink badly."

Francis reported from London. The Washington Post's Kamila Hrabchuk in Kyiv contributed to this report.