How Ukrainians, targeting by drone, attacked Russian artillery in Kherson 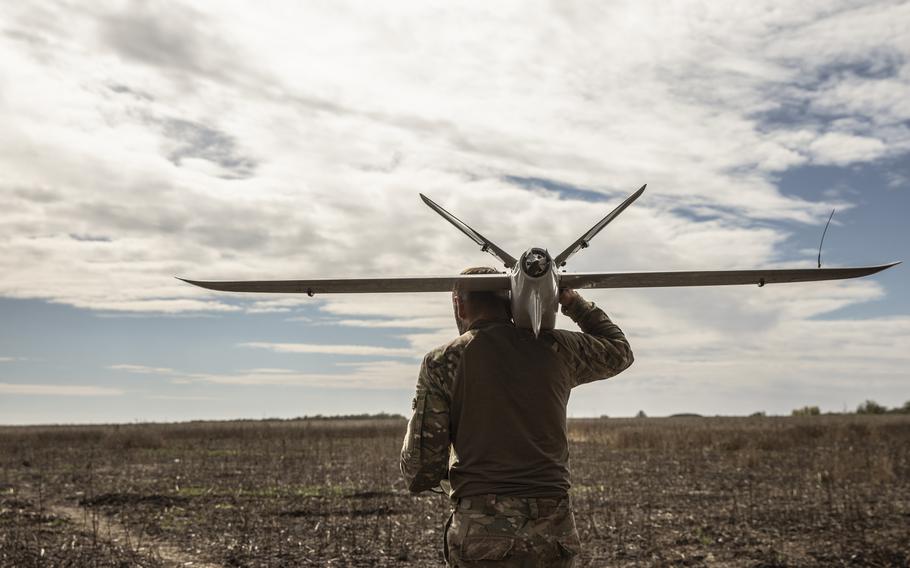 A Ukrainian soldier who goes by the call name “Viter” carries a Leleka-100 drone about to be launched, and carefully navigates his way through a field on Thursday in the Kherson region, Ukraine, seeded with Russian mines. (Heidi Levine/for The Washington Post)

KHERSON REGION, Ukraine — The discovery was made by two Ukrainian soldiers staring wide-eyed at their laptop screens, set up in the trunk of their SUV. They sat on a makeshift bench, the large plastic case for their drone. What they were looking at was some 25 miles away, deep into Russian-occupied Ukrainian territory.

It was a Russian artillery battery positioned in a thin slice of tree line. The drone operator, Leonid Slobodian, started counting out loud as he zoomed in and took screenshots of the findings. He saw at least five guns, trucks that probably carried ammunition inside and counterbattery radar. This was what the Ukrainian military calls a “fat” target.

Beside him, Oleksandr Kapli fired off a voice message to the members of the 128th Mountain Assault Brigade also watching a live stream of the drone camera.

“We need to smash this from front to back,” Kapli said into his phone.

Then the expletive-ridden response: “Send all of the footage and we’ll [mess] it up.”

Russian forces in Ukraine’s southern Kherson region are attempting to hold the front line near the town of Dudchany after a strategic retreat along the Western bank of the Dnieper River. Ukraine’s military, meanwhile, is trying to take back even more ground before reinforcements from Russian President Vladimir Putin’s mobilization arrive.

The “Falcon” unit of the Kryvyi Rih Territorial Defense Forces on Thursday allowed Washington Post journalists a rare look at a day of battle here through the lens of their Ukrainian-made Leleka-100 drone, which looks like a small, gray plane. Moscow has more weapons than Kyiv, so strikes on “fat” targets — armored vehicles, ammunition reserves and artillery — like the one the Falcon unit identified on Thursday is how Ukraine can weaken its enemy and advance.

In the Kherson region, where the terrain is flat with wide-open fields, hiding that sort of equipment from reconnaissance drones is a challenge for each side — one that will only increase as the leaves fall and winter arrives.

On Thursday, the Falcon unit was able to see through the trees. It located the Russian artillery battery, helped Ukraine’s own artillery target it, and then watched as parts of it were destroyed.

“Our task is to determine how many reserves are coming in, how strong these Russian fortifications now are, and to track all of the military equipment,” Kapli said. “Then we convey all of that to artillery forces, and they shell everything possible.”

Russian forces are now massing near the town of Mylove, Kapli said, to defend their stronghold in the occupied town of Nova Kakhovka, on the opposite bank of the river. There, Moscow has seized a hydroelectric power plant that controls a vital water supply to Crimea, which Russia illegally annexed in 2014.

The artillery battery the Falcon unit spotted was near the neighboring village of Chervonyi Yar. A second drone flight confirmed the equipment was still in place, and Slobodian passed along more screenshots of the site, reading out its coordinates.

Neither he, Kapli, nor most of the rest of their unit had any combat experience before Russia’s full-scale invasion. Slobodian and Garry Wagner, who operates the drone with him, were cameramen for Ukrainian television channels before the war.

After collecting donations, Falcon’s commander, Oleh Lyadenko, in April purchased the Leleka drone, which can fly about 25 miles and stay in the air for two hours before it needs a battery change. Sometimes, the 128th brigade asks for Falcon to check certain locations, or to follow a Russian column of tanks to see where they go. Other times, the drone operators make their own finds.

The recent Russian retreat allowed the unit to move forward into recently liberated villages and fly over territory previously out of their camera’s range.

On Thursday, they launched their drone from a trench line the Russians had used for themselves until this week. While the drone was flying, some of the soldiers took careful steps around the neighboring field, shooting at still unexploded mines.

During one of the Leleka’s flights, they noticed on the screen a second, longer trench line nearby. Two of the soldiers went to explore it, returning with souvenirs — baseball caps with patches of the Russian flag and a “Z,” the symbol for Russia’s invasion of Ukraine. The retreating Russians left crates of pear juice behind, which the unit has been drinking with smirks on their faces.

With the help of a Starlink satellite internet system, they worked from 8 a.m. until sunset. Around 2:45 p.m., they launched the drone for its penultimate flight of the day. Within minutes, it spotted smoke on the horizon, near where they identified the enemy artillery battery for the 128th brigade.

But as it got closer, Slobodian realized it was a neighboring tree line. The Russians had attempted to hide their equipment there, too, and a different reconnaissance drone had spotted it. Ideally, this is how it should work, Kapli said — one drone following another so coverage is never lost and more targets are marked. As long as something was burning, everyone in the unit was happy.

Falcon’s job now was to keep its camera trained on the area and confirm that the U.S.-provided artillery was striking accurately as shells landed along the tree line. Soldiers crowded around the computer screen and cheered as they watched the explosions in real time.

“At least we have something to be happy about today,” Kapli said in a voice note to his comrade in the 128th brigade.

“Grilled meat,” Slobodian deadpanned as another explosion flashed across the screen.

Then one strike hit a Russian Ural truck, creating a massive mushroom cloud over the spot. It had been filled with ammunition. The men watching the screen erupted, too. Now the enemy had fewer shells to attack with — and fewer guns to fire them.

“That was a nuclear explosion,” Kapli exclaimed between laughs. “We’ve been fighting for a while now, but an explosion like that, I haven’t seen.”

Slobodian rubbed his hands together. The “fat” position they discovered would be next. Smoke rose over the trees again. At least one of the Russian 152-mm guns were damaged, they suspected. Their drone was running out of battery power and needed to turn back, but the day had been successful.

By Friday, they had moved on to new targets, recording overhead video of a Russian tank burning on the side of a different field.