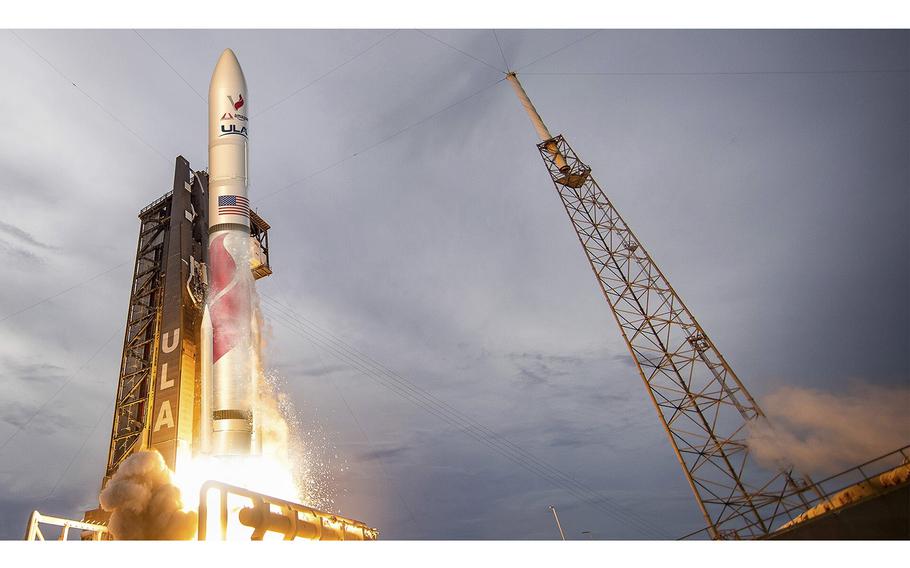 The first two satellites of Amazon's space-based internet constellation will be launched early next year on the maiden flight of a new rocket being developed by one of the U.S. Space Force's biggest contractors.

In an announcement Wednesday, Amazon said it would hitch a ride on the new Vulcan rocket being developed by the United Launch Alliance, a joint venture of Boeing and Lockheed Martin.

The prototype satellites, part of Amazon's Kuiper system that would beam the internet to stations on the ground, were initially scheduled to launch by the end of this year with rocket start-up ABL Space Systems. But delays and the opportunity to launch with ULA, which was already contracted for 47 launches of satellites for Amazon, compelled the company to switch rockets, said Rajeev Badyal, the vice president of technology for Project Kuiper.

Amazon has permission from the Federal Communications Commission to put up 3,236 satellites, helping connect people without easy access to broadband as it seeks to compete with SpaceX's Starlink system. The company has pledged to invest more than $10 billion into a system it says will serve not only individual households but also schools, hospitals and businesses that do not have access to reliable broadband. Badyal said Amazon now has 1,000 people working on the project as it seeks to grab a part of the lucrative internet market taking hold in space. (Amazon founder Jeff Bezos owns The Washington Post.)

"It's absolutely a critical program for the company," he said, adding that "there are over a billion people on Earth without reliable broadband." Being able to connect "the unserved and underserved around the planet," he said, "that's really an important part of what we're doing."

To meet the obligations under its FCC license, Amazon must deploy half the constellation by 2026. Badyal said the company is on track to meet that requirement.

Elon Musk's SpaceX, though, already has a constellation of more than 3,100 satellites in orbit. Its Starlink system is operating in more than 30 countries and has built a broad customer base, Musk has said. In August, he announced a deal with T-Mobile that would allow the cellular company's phones to connect directly with Starlink satellites, a service the companies said would largely eliminate dead zones.

Even though SpaceX has been first to deploy its constellation, Badyal said the market for internet service is massive and could support more than one company. "We're going to need multiple constellations to serve those customers."

Amazon, he said, is "building extremely advanced new technologies, and a lot of our focus has gone into: How do we reduce costs for our customers? In the long run, we believe what we're doing will translate into a lot more capacity, a lot higher bandwidth, and actually a lot lower prices for our customers. That's our DNA."

For ULA, which for years has lofted sensitive satellites for the Pentagon and intelligence agencies, the partnership with Amazon gives it a foothold in the commercial launch market, which is also dominated by SpaceX.

The company has been developing Vulcan, its next-generation rocket, which it says will become the workhorse as it retires the Atlas V, which relies on a Russian-made engine. Vulcan has been delayed repeatedly, in large part because its engine, the BE-4, is years late. That engine is being developed by another Bezos company, Blue Origin. Despite the setbacks, ULA said that there has been tremendous progress recently and that Vulcan is on track to launch for the first time in the first quarter of next year.

The main payload of that flight would be a robotic spacecraft, known as Peregrine, being built by Astrobotic, an aerospace company based in Pittsburgh. Peregrine would land on the moon as part of a NASA mission, while Amazon's satellites would be deployed earlier, in low Earth orbit.

ULA is under pressure to get Vulcan flying because the Space Force intends to use it to launch national security satellites. But before Vulcan can launch the first Defense Department mission, scheduled for the end of 2023, ULA must launch the rocket twice to prove it is reliable.

Tory Bruno, the chief executive of ULA, said in an interview that the company is "confident we have enough time" to perform both launches and analyze the data to meet the Space Force's timeline.

In June, Frank Calvelli, the newly installed Space Force acquisition chief, said getting Vulcan ready to launch Pentagon satellites is a national security priority, and one of his first trips was to visit ULA to monitor its progress.

"I'm going down there as one of my first industry visits to make sure they know it's really critical that they launch this year in December like they committed to, that they get those engines delivered," he said, according to SpaceNews. "So I'm going there as education to learn, and to make sure that both Blue Origin and ULA know how critical this is."