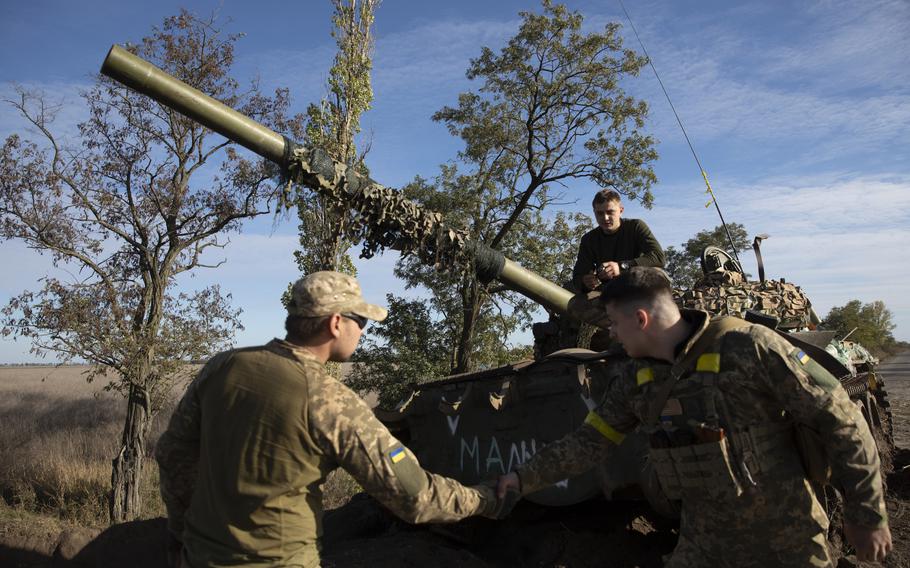 Ukrainian soldiers greet one another by a Russian tank along a road in the Kherson region of southern Ukraine on Thursday. M (Heidi Levine/for The Washington Post)

Russian Ground Forces Gen. Alexander Dvornikov, who over a 44-year military career was best-known for scorched-earth tactics in campaigns he led in Syria and Chechnya, was named overall operational commander of the war in Ukraine in April. He lasted about seven weeks before being dismissed as part of a wider shake-up in response to heavy losses and strategic failures.

Around the same time, Col. Gen. Andrey Serdyukov, another four-decade serviceman, the commander in chief of the elite airborne troops, was stripped of his post after nearly all divisions of the airborne forces suffered major losses.

And just last week Col. Gen. Alexander Zhuravlev, the head of the Western Military District responsible for Kharkiv, where Russian forces lost huge swaths of territory in early September, was removed after four years on the job, according to Russian business daily RBC.

Far from bestowing glory on Russia’s military brass, the war in Ukraine is proving toxic for top commanders, with at least eight generals fired, reassigned or otherwise sidelined since the start of the invasion on Feb. 24. Western governments have said that at least 10 others were killed in battle, a remarkably high number that military analysts say is evidence of grievous strategic errors.

The upheaval in the upper ranks of uniformed officers highlights Russia’s fundamental mistakes in war planning, and the dysfunctional chain of command that resulted first in Moscow’s failure to achieve its primary military objective — the quick capture of Kyiv, and toppling of the Ukrainian government — and more recently in the retreats on the eastern and southern fronts.

But the dismissals also reflect a scramble by political elites to place blame for the costly and faltering war as open criticism grows louder, particularly among pro-war hawks and propagandists.

Like their badly prepared forces on the front, the commanders in the Russian Armed Forces are turning out to be easy targets, even as senior political leaders, including Defense Minister Sergei Shoigu, the Chief of the General Staff Valery Gerasimov, and President Vladimir Putin himself had largely avoided direct criticism.

Recent criticism of Shoigu, however, has signaled that his job, too, may finally be in jeopardy. 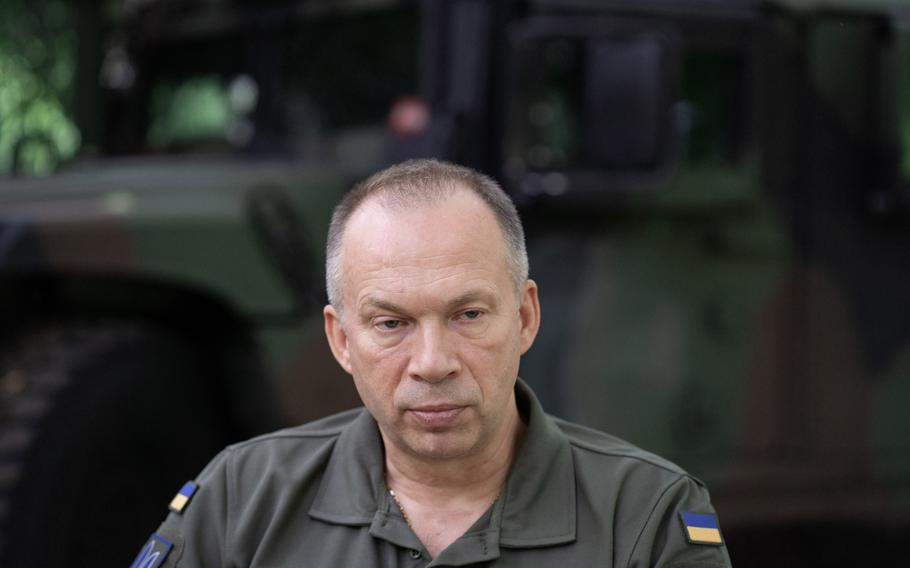 Ukrainian Col. Gen. Oleksandr Syrsky has been celebrated for his victories, while in Russia, commanders are being fired. (Anastasia Vlasova/for The Washington Post)

Unlike in Ukraine, where the top generals, including the commander in chief, Valery Zaluzhny, and Oleksandr Syrsky, who led the recent Kharkiv offensive, are now revered figures, it has often been difficult to know who in Russia is actually running the war. Personnel changes are often carried out with little public announcement and trickle into the Russia media with little or no explanation.

On Friday, RBC reported that the commander of Russia’s eastern military district, Col. Gen. Alexander Chaiko, had been replaced by Lt. Gen. Rustam Muradov. No explanation was given for the switch.

In a rare public announcement of staffing changes, the Russian defense ministry said late last month that it removed the general responsible for “the logistics support of the Armed Forces,” Dmitry Bulgakov, and appointed in his place Col. Gen. Mikhail Mizintsev.

Mizintsev was an obscure figure before the Ukraine war but has earned the gruesome moniker “Butcher of Mariupol” after Ukrainian officials and activists accused him of orchestrating a brutal siege of the southern Ukrainian port city that has killed thousands of civilians and razed residential buildings.

And on Friday, Russia’s Black Sea Fleet admitted after weeks of speculation that it had replaced its commander, Adm. Igor Osipov, with Vice Adm. Viktor Sokolov who vowed to “increase the combat readiness of the fleet.”

In late April, Ukraine sank the fleet’s flagship, the cruiser Moskva, with an audacious but successful strike using two Neptune anti-ship missiles. On Navy Day, in July, the headquarters of the Black Sea Fleet was attacked by a makeshift combat drone that dropped an explosive device on its roof, a symbolic attack that symbolized Ukraine’s ability to strike deep into Russian positions.

The recent public announcements of dismissals may reflect a growing imperative to satisfy demands for blame and accountability. Such calls, and criticism of the war effort in general, have been amplified since Putin’s declaration of a partial military mobilization last month, which led more than 200,000 fighting-age men to flee the country, and set off angry complaints over men wrongly being called to service and conscripts receiving poor treatment, including minimal food and rusting weapons.

After a long string of failures and few significant victories, the knives now seem to be out for Russian generals, amid criticism from prominent Russian military correspondents, state television propagandists and even members of the normally obedient parliament.

Two Russian lawmakers — chairman of the defense committee Andrey Kartapolov and anti-corruption committee Vasily Piskarev — are holding closed-door meetings in the lower house of the parliament, the State Duma, to review the “situation with the supply of the Russian army.”

Kartapolov and Piskarev also sent a written request to the prosecutor general, asking him to investigate “how the financing was wasted in the rear” — alleging that commanders have been looting the military budget.

The head of Chechnya, Ramzan Kadyrov, who sent his own fighters to Ukraine, slammed the commander of the Central Military District, Alexander Lapin, as a “talentless” leader and a product of “nepotism” in the leadership of the general staff, for deploying fighters from one of the self-declared pro-Russian separatist areas without proper support or preparation.

“The colonel-general deployed mobilized fighters from the Luhansk People’s Republic and other units on all frontiers of the Lyman direction, but did not provide them with communication, did not ensure coordination and a proper supply of ammunition,” Kadyrov wrote in a scathing post last Saturday.

Critics, including Kadyrov, have accused top officers of lying about what is happening on the front.

“It’s necessary to stop lying,” Kartapolov, the defense committee chairman, said, lashing out on Soloviev Live, an online channel run by top state television propagandist Vladimir Soloviev. “Almost all the border villages of the Belgorod Region have been destroyed, but we are learning this from anyone: governors, Telegram channels, military correspondents. But not the Defense Ministry,” Kartapolov said.

In a different show this week, Soloviev said that “lies on every level must be punished most severely.”

“I don’t pretend to know the art of warfare, but what is the genius idea behind the general staff plans now?” Soloviev asked rhetorically. “Do you think time is on our side? [Ukrainians] have concentrated weapons and mercenaries . . . and what have you done in that time?”

According to Conflict Intelligence Team (CIT), an independent group that has been monitoring Russian military activities in Ukraine since 2014, Col. Gen. Gennady Zhidko took over from Dvornikov in May as the overall commander of the Russian war.

Dvornikov’s dismissal may been linked to the destruction of the 58th Combined Arms Army, normally stationed in the southern Vladikavkaz, which was lauded as one the most combat-ready Russian armies and key to the invasion of Georgia in 2008, BBC’s Russian service reported.

But Zhidko, who also held the title of deputy defense minister, in what appears to be a damning trend for generals in Ukraine, was in charge for about a month before more problems emerged, and he was demoted to the head of the Eastern Military District.

It is not clear which general currently runs the overarching Russian war operation.