With its troops losing ground almost daily, the Kremlin has told some of its state media to start admitting some of the failings of President Vladimir Putin’s invasion of Ukraine, worried that its relentlessly upbeat propaganda was fueling growing public doubts.

The shift in policy over the last few weeks, described by people familiar with the Kremlin’s tight message management who spoke on condition of anonymity, has unleashed a wave of unusual public criticism of the military. After months of reporting virtually nothing but battlefield successes, state TV has lately been cataloging Russian retreats and defeats — without the usual positive spin from the Ministry of Defense.

“We have to stop lying,” Andrey Kartapolov, a former general who now heads the Defense Committee in the lower house of parliament, said on a popular online talk show this week. “Our people aren’t stupid.”

There’s no sign the Kremlin will let the strictly controlled media go that far, of course, and no questioning of Putin or his decision to invade is allowed. But with little prospect its forces will be able to slow Ukraine’s counteroffensive in the near future, the authorities hope the appearance of less spin may help shore up public support.

The new approach is also reflected at the highest level. The president has held at least two closed-door meetings since early summer with a small groups of Russian military correspondents, including one shortly before last month’s sudden decision to order the call-up of 300,000 reservists, according to people familiar with the situation.

The sudden appearance on state TV of criticism of the military’s handling of the war could provide a justification for calls from hawkish elements in the Russian elite for more indiscriminate attacks on Ukrainian cities and infrastructure, said Tatiana Stanovaya, founder of the R.Politik research group.

“There’s a huge debate among the ruling class how to win this war now the army has showed it isn’t capable,” she said. “There’s a hunt for those responsible and efforts to get Putin to look for other solutions.”

At their last meeting with Putin, the war reporters, known for their hardline nationalist views and skepticism of the military brass, painted a dire picture of the situation on the front, the people said. In just a few weeks, Ukraine’s forces had swept into large swathes of territory that Russian troops had spent months fighting to occupy. Some of the correspondents came away wondering whether Putin had been getting a full account of the real situation from his official briefings, according to the people.

Kremlin spokesman Dmitry Peskov didn’t respond to a request for comment for this article.

Within days, Putin had set in motion steps to declare the lands his troops still held permanently part of Russian territory and the “partial mobilization.” More than 300,000 people raced to flee the country.

As the Ukrainian counteroffensive pushed Russian lines further back — retaking land that Putin had only just claimed to have annexed — state TV dropped the official line that the retreats were carefully planned strategic moves.

“Yesterday we lost 16 settlements in the Kherson region. What will we lose today?” host Olga Skabeyeva grilled an occupation commander on her prime-time show on Oct. 5. “We’re maneuvering with elements of a retreat” was all he could mumble in response.

“Things are not going well for us on the battlefield,” Vladimir Solovyov, the country’s most prominent state-TV news host, lamented on his nightly show earlier this week (Oct. 4).

Talk shows have blasted military commanders for failing to head off the Ukrainian advances, as well as for the botched call-up, which has been marred by widespread reports of old, infirm or otherwise exempt people being sent off to training camps.

“The difficulty of the situation was predictable,” war reporter Alexander Sladkov said this week on a prime-time talk show on Rossiya 1. “We’re still learning. I know that’s horrible to hear at the eighth month of the operation.”

Polls show the sudden mobilization order shocked many Russians, leading some to question the invasion’s progress for the first time since Putin launched it on Feb. 24. In the Kremlin, officials worried that the dissonance between battlefield reports available in the popular Telegram messaging app and the Defense Ministry’s daily accounts of triumphs at the front were undermining public confidence.

For all the new willingness to admit fault and criticize the military, Putin remains strictly off limits for questioning.

“The question is: when we talk about the chaos, partial mobilization, why things happened the way they did in Lyman, Balaklia, we all have the same question: Is our commander in chief aware? Is Vladimir Vladimirovich aware of this?” Margarita Simonyan, a top state news executive asked on TV Sunday. “I think he is aware of it and understands very well.” 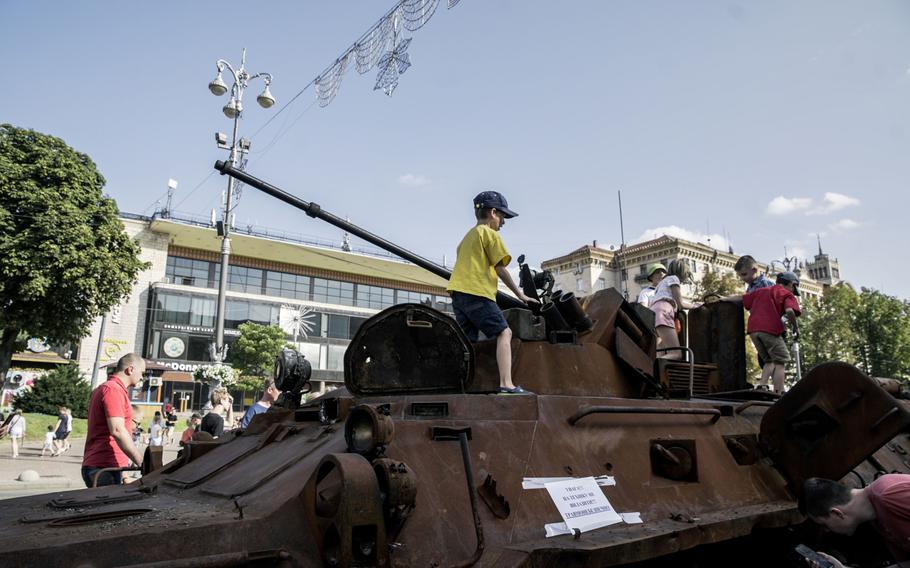 Members of the public visit an exhibit of destroyed Russian military equipment on Khreschatyk Street, ahead of Independence day, in Kyiv, Ukraine, on Aug. 21, 2022. (Julia Kochetova/Bloomberg)