Winter is coming in Ukraine — and a battle of stamina awaits 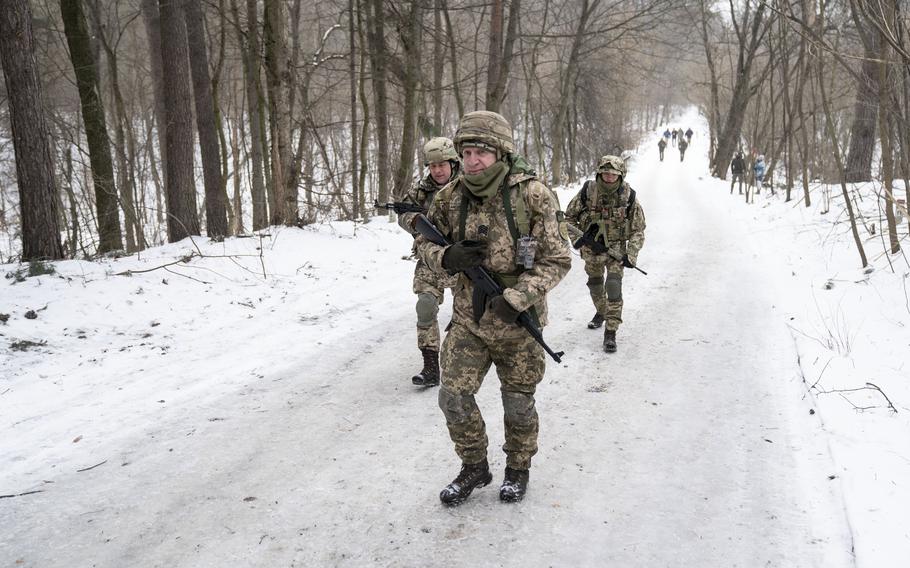 Volunteers with the Ukrainian Territorial Defense Forces traverse an ice-covered road outside of Kyiv in early February 2022, weeks before Russia's invasion. With the onset of winter drawing near, observers see the war entering another tough new phase. (Michael Robinson Chavez/The Washington Post)

As Ukraine forces endeavor to capitalize on recent battlefield wins, winter’s rapid approach threatens to stalemate the conflict and offer Russian commanders a chance to stall their momentum.

Falling temperatures are expected to increase troops’ demand for even the most basic provisions, straining supply lines that are already overtaxed.

Rain and snow will muddy the battlefield, rendering heavy military vehicles and equipment functionally immovable. It’s a particular concern in the south, where heavy fighting is ongoing and the ground has failed to freeze over in recent years.

Many Ukrainians anticipate Russia will attack civilian infrastructure that supplies heat and electricity to major cities, just in time for the frost.

In a few short weeks, for almost everybody with a stake in the fight, life is about to get much more difficult. And at that point, observers say, the war will become a battle over which side can better withstand the other’s efforts to destroy morale.

“Russian strategy across the region is not about moving the front line; it’s about causing pain on civilians who are far away from the front line,” said Sam Charap, a Russia expert with the Rand Corp. Russian leaders might be mistaken in betting the winter will prove “too tough” for Ukrainians and their European benefactors, but “they’re going to do their best to make it so,” he said.

The seasonal shift approaches as emboldened Ukrainian forces rack up significant wins, ejecting Russian units from occupied territory in the east, south and north. In September, they reclaimed ground in the Kharkiv region. Currently, they are making gains around Kherson — the only land Russia has held west of the Dnieper River — after retaking the strategic hub of Lyman, a potential springboard for pressing deeper into the Luhansk and Donetsk regions.

Russian President Vladimir Putin has responded by ordering the mobilization of up to 300,000 military reservists, declaring an annexation of occupied territory and threatening to use nuclear weapons to achieve his aims. The rhetoric has amplified a persistent concern among some of Ukraine’s allies who fear providing certain advanced weapons will provoke Putin into doing something wildly escalatory and irreversible.

The question now: How much can Ukraine accomplish with this burst of momentum, using the types of arms and equipment it has and knows how to use, when the window for introducing new and potentially game-changing weapons onto the battlefield is probably closed until the spring?

The Pentagon’s latest security package, announced Tuesday, appears to underscore this. In detailing the additional artillery, ammunition and mine-resistant vehicles being rushed to the war zone, U.S. officials emphasized that Ukrainians have “demonstrated the ability to use these capabilities,” enabling their advances. NATO defense ministers, who have committed to designing a long-term strategy for arming Ukraine, are set to meet in Brussels next week.

Fighters on both sides of the conflict are familiar with operating in winter. The opening weeks of the war, for instance, were so cold that underequipped Russian troops suffered frostbite, which slowed but failed to stop the invasion. Ukraine’s allies have increased supplies of coats, hats and other insulating clothing to give its personnel an advantage over the elements.

Another concern for Ukrainian commanders is the risk that certain weapons will become degraded by the harsh weather. It’s unclear, observers say, how durable its military systems are, given their heavy use. And operating such equipment in the cold will require more energy, with snow accumulation only complicating the transport of fuel and parts. A Ukraine woman is pushed through the snow in a shopping cart as people flee the Russian advance on Irpin in March. (Heidi Levine/for The Washington Post)

“Basic mechanics start breaking down, and anything that is liquid-based becomes more difficult, too,” said Rep. Ruben Gallego (D-Ariz.), a U.S. Marine Corps veteran who served in a cold-weather mountain unit. Fuel demands, he said, will skyrocket. “If you want to keep your generators going, you can’t shut down. The chance of it restarting is impossible.”

The looming cold presents both armies with a strategic dilemma, experts say: By sticking close together and sharing resources, it is possible for military units to minimize demand on supply lines. The problem, they say, is that doing so increases vulnerability to attack.

U.S. officials and others who have closely tracked the war say that Russian supply lines already have proved weak and that its military difficulties will only worsen once the 300,000 conscripts and reservists are thrown into the mix. According to Pentagon officials, it is not possible for Russia to adequately scale up its logistical operations before winter hits.

“Fighting through the thick of the winter is going to suck for these soldiers, on both sides,” said Col. Dave Butler, a spokesman for the Joint Chiefs of Staff. But Ukraine will enjoy “one key advantage,” he added: “local support.”

Throughout the war, Ukrainian personnel have relied on such help. Sometimes civilians help sustain soldiers with food and fuel. Other times, they might provide shelter or a vehicle. What remains to be seen is how well Ukrainian civilians will be positioned this winter to continue serving as a backstop.

President Volodymyr Zelenskyy has predicted Russia will target his country’s electrical grid, insisting in an interview with CBS News last month that the Ukrainian people are “not afraid” and are determined to “live through this winter.” But those in Zelenskyy’s army worry it will be difficult to bear.

“People are really in danger of being left without heat, electricity and water,” Daria Zubenko, who commands a Ukraine army platoon, said in an interview during a recent trip to Washington where she and other military personnel petitioned U.S. government officials and lawmakers for more security aid.

U.S. officials appear to share such concerns. “I’m worried about Ukraine’s continued ability to function as a country,” said Rep. Michael Waltz (R-Fla.), fearful it could “become energy-starved, and perhaps even head into an economic crisis this winter.”

Ukraine and its supporters are clamoring for more advanced Western weapons to secure territorial gains before winter complicates the military’s counteroffensives. Zelenskyy and his aides have zeroed in on two: tanks, particularly the German-made Leopard, and aircraft, which they say will enable Ukraine forces to better protect their territory.

“How far we get before it gets cold, the more lives we save,” Zubenko said, frustrated that Europe’s dependency on Russian fuel seemed to be influencing its willingness to contribute more powerful weapons. “We know that European countries are concerned about their bills, about electricity. ... But, I don’t know, maybe it’s not that bad as living without electricity and heating at all.”

In the West, skepticism remains about supplying Ukraine with more-advanced systems in the short term.

Laura Cooper, a senior Pentagon official, told reporters Tuesday that the United States agrees Ukraine needs more tanks but that Soviet systems are probably best as its military already knows how to operate them. U.S. officials have warned that new weapons, including tanks and aircraft, require significant training and present additional maintenance and resupply demands that Ukraine may not yet be equipped to handle.

All of those elements need to be launched “as a total package,” according to a U.S. defense official, who like others spoke on the condition of anonymity to discuss military contributions to Ukraine.

“You can’t mount an offensive to kick the Russians out of Ukraine today,” another said, noting that what Ukraine needs is a “long-term plan to rebuild an army to kick out the Russians.”

Andriana Arekhta, a volunteer in Ukraine’s army, bristled at such rationale. She said she has fought in battle from the back of a pickup truck because there were not enough armored vehicles. Arekhta acknowledged that “yes, we need training” and that the Ukrainian advance probably “will stop, for example in November or December, until spring.” But that is not, she believes, reason for the West to deny Ukraine all of the help it needs, particularly when it comes to better securing the country from the Russian missile attacks they believe are coming.

“Critically, we need a ground air defense system,” she said. “People [will] not survive during winter, hungry and frozen. Is the civilized world ready to see that?”