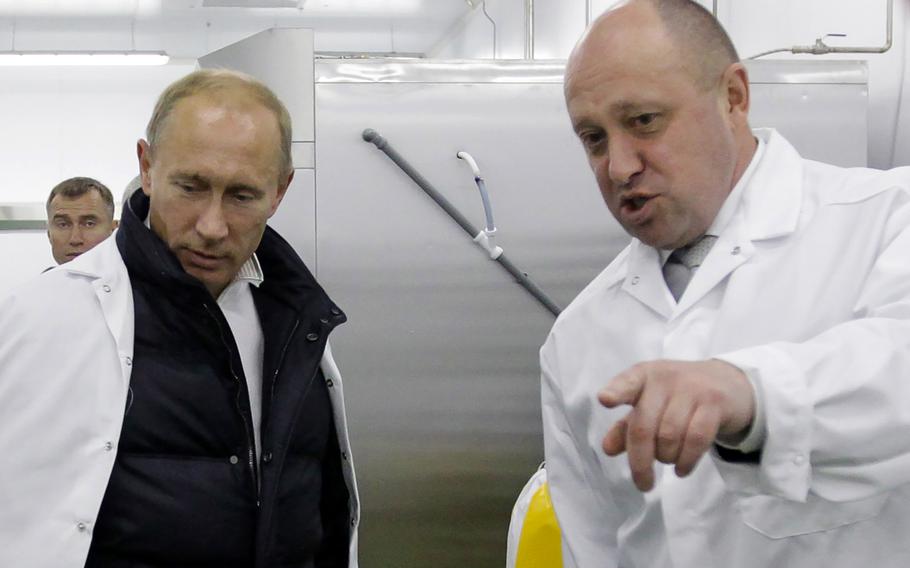 BERLIN (Tribune News Service) — As Russia suffers one devastating military setback after another in Ukraine, a key player in the conflict is stepping out of the shadows: the private army known as the Wagner Group.

Despite the Kremlin’s longtime practice of publicly distancing itself from the paramilitary organization, Wagner mercenaries — who first emerged during Russia’s 2014 conquest of Ukraine’s Crimean peninsula — have taken part in some of the most consequential battles of the 7-month-old war, according to Western military analysts.

Now, at a potentially fateful juncture in the fighting, experts say Russia is likely to become even more dependent on the private army, which has been implicated in human rights abuses in Ukraine as well as other conflict zones, including Syria, Libya, Mali and Central African Republic.

“The more dire the situation gets for the regular [Russian] army, the more it will be required to lean on private mercenaries like the Wagner Group,” said Christopher Faulkner, an assistant professor at the U.S. Naval War College.

As finger-pointing has intensified over recent battlefield losses in Ukraine’s south and east, the group’s self-declared chieftain, oligarch Yevgeny Prigozhin, has become increasingly virulent in his criticism of the Russian war effort.

“Send all these bastards to the front, barefoot and with machine guns,” a Wagner-linked Telegram channel quoted him as saying in an apparent reference to the senior military leadership.

Prigozhin, who only last month publicly claimed to be the head of what is formally called PMC Wagner, for private military company, unleashed his critique after Russian forces fled or were wiped out in the eastern Ukrainian city of Lyman, a key operations hub. 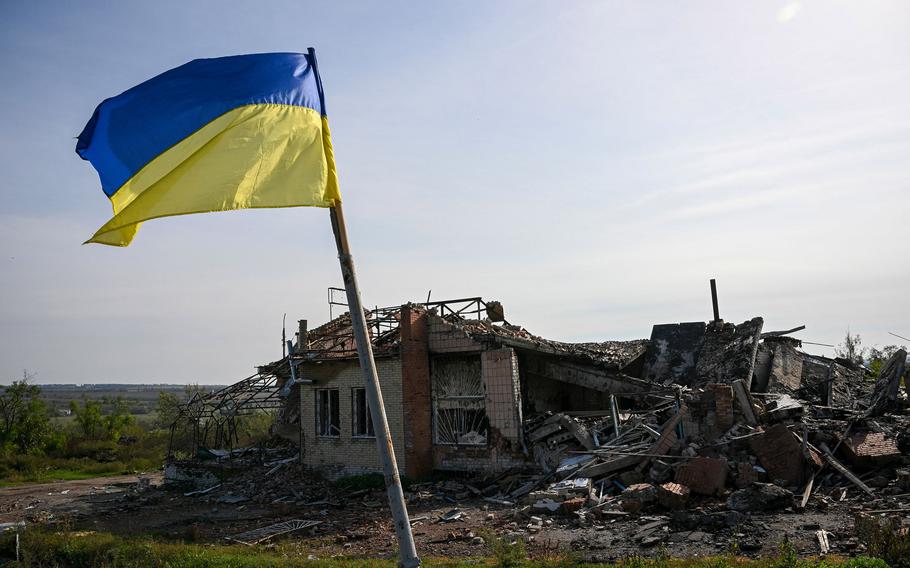 A Ukrainian national flag is displayed in front of a destroyed house near Izium, eastern Ukraine, on Saturday, Oct. 1, 2022, amid the Russian invasion of Ukraine. (Juan Barreto, AFP/Getty Images/TNS)

The city was recaptured last week by Ukrainian troops a day after Putin declared the province in which it is located to be part of Russia — an annexation that most of the outside world, and of course Ukraine, rejected as illegal. Russia’s most hawkish commentators, who champion the war on Telegram channels and state television, reacted with fury to the loss of Lyman, but 61-year-old Prigozhin went further than most.

It was a pugnacity that analysts said could help establish him as a political threat to Vladimir Putin despite his professed fealty to the Russian president.

Prigozhin’s comments came on the heels of another eye-catching recent episode: the surfacing in September of video, widely shared online, which showed him at a Russian state-run prison recruiting inmates to fight in Ukraine.

Previously, convicted rapists and m urderers were not accepted as volunteers, but according to the group Russia Behind Bars, which works to support prisoners’ families, Wagner is throwing open its doors to anyone willing to risk service on the front lines, no matter their crimes.

In addition to undermining Kremlin denials that Wagner’s operations are officially sanctioned, Prigozhin’s prison performance was a powerful appeal to those who venerate strongman-style leadership and may be disenchanted with Putin.

Abbas Gallyamov, a political analyst and former speechwriter for Putin, wrote on Telegram that Prigozhin is clearly positioning himself to appeal to those “disappointed with the current government.” Christo Grozev, of the investigative group Bellingcat, said that in the eyes of Prigozhin’s followers, his stature has grown even as the president’s is diminished by wartime failures.

“Wagnerites tell me they’d vote for him over Putin any time, and it seems to me he smells blood,” Grozev wrote on Twitter last month.

In past conflicts, the deliberate ambiguity of Wagner’s relationship with the Putin government worked to Moscow’s benefit, said Tracey German, a professor of conflict and security at King’s College London.

“The advantages of a group like Wagner are obvious,” she said. “On the one hand, they can use the unit to exert military influence in various places around the world. At the same time, the Kremlin can always say that it has nothing to do with the group.”

Wagner is not the only paramilitary group that is operating in a legal gray zone in Ukraine. Another, called Redut, allegedly has close links to the Russian forces and the Ministry of Defense. According to the Russian-language news portal Meduza, a detachment of Redut mercenaries in the Donbas region carried out reconnaissance that laid the groundwork for the push into Ukraine in the morning hours of Feb. 24.

“I don’t think that this is mutually exclusive,” said Faulkner, of the Naval War College, who was voicing personal views rather than citing a Pentagon assessment. “Russia will still use groups like Wagner, even if they increase their formal mobilization.”

If anything, analysts said, deploying reluctant or hapless draftees to the front lines is likely to exacerbate the regular army’s severe problems with morale, training and equipment. But while Wagner mercenaries may be more efficient fighters than regular troops, their numbers are not great enough to be a game-changer militarily, according to experts.

“Wagner forces are highly unlikely to be sufficient to make a significant difference in the trajectory of the war,” British military intelligence said in an assessment back in July. But it pointed out that the group had probably played an important role in summertime Russian advances in the Donbas, the eastern industrial heartland — gains that are now being partially rolled back by Ukraine.

Wagner, however, has shared some of the disaster-prone tendencies of Russian regular troops. Several thousand of its fighters are thought to have been killed in Ukraine. About 200 of its personnel were in the vanguard of the ultimately failed attempt to capture the Ukrainian capital, Kyiv, at the start of the war, Bellingcat’s Grozev told British lawmakers in April testimony.

And in one widely publicized incident in August, a pro-Kremlin journalist posted a photograph of an alleged Wagner base in eastern Ukraine in which a street address could be seen. Ukrainian forces subsequently bombed the structure into rubble, though without saying whether the photo enabled them to pinpoint it.

The prison-recruitment drive, human rights activists said, demonstrates Wagner’s ruthless quest for fodder at a time when front-line duty has become even more dangerous than it was earlier in the war.

Those who are desperate to escape Russia’s brutal penal system have little inkling of the battle conditions they would probably face, said Berlin-based activist Olga Romanova, who founded Russia Behind Bars. Prisons have proved to be fertile recruiting grounds: Romanova said her organization has tracked the cases of approximately 11,000 inmates who joined Wagner, of whom 7,500 are believed to have been deployed to Ukraine.

The paramilitary group promises they will be freed after six months of service, but Romanova said her organization hadn’t learned of anyone who was recruited long ago enough to reach that benchmark — if they survived.

The family of one prisoner, Vadim Akimov, tried desperately to dissuade him from joining Wagner. His mother, Svetlana, told the group My Russian Rights that she and his father thought they had convinced him not to believe the group’s assurances that he would be doing construction work in Ukraine, but then in August, they abruptly lost contact with him. The prison administration will not tell the family if he agreed to join up.

“We want to know where he is, whether he is alive,” the mother said in a video made by the rights group. “In the end, he may have signed the contract.”

In the recruitment video, Prigozhin makes it chillingly clear that once inducted into the Wagner ranks, there was no going back.

“If you arrive in Ukraine and decide it’s not for you,” he is heard telling prisoners, “we will execute you.”