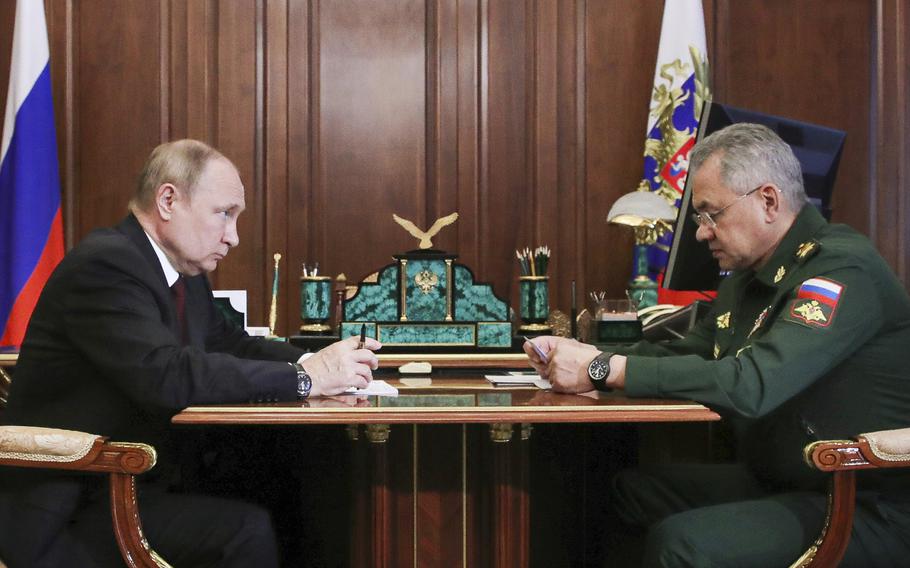 Russian President Vladimir Putin announced a “partial mobilization” of reservists as his country faces setbacks in its invasion of Ukraine. The move, announced in an address to his nation on Wednesday, marks Russia’s first military mobilization since World War II.

The order was swiftly condemned by U.S. and European officials and comes as the Kremlin faces a significant problem in troops and workers as well as major setbacks as part of what it calls its “special military operation,” amid a successful Ukrainian counteroffensive around Kharkiv. Here’s what to know about Putin’s order and what it means for Russia and the war in Ukraine.

What does partial mobilization mean?

Partial mobilization is a term for when specific groups of people will be called up to serve in Russia’s armed forces. It is different from a general mobilization, which involves drafting from the general population, refocusing the entire economy and essentially setting the entire country on a warpath, hitting a pause on normalcy.

How many Russian reservists will be called up by Putin?

Shoigu said that the country’s “mobilization resource amounts to 25 million people, and a little more than 1% of this number falls under partial mobilization” ordered by Putin.

If true, this is a significant increase: Russia is believed to have invaded Ukraine with around 150,000 troops in late February — so another 300,000 is more than double that. While it’s unclear how exactly the reservists would be deployed, Putin’s move comes after reports of heavy troop losses in Ukraine. It would be the first military mobilization in the history of modern Russia.

Outside estimates of number of reservists available to Russian military leaders vary. The Institute for the Study of War, a U.S.-based think tank that closely tracks the war, previously said Russia has over 2 million reservists, including former conscripts and contract soldiers. However, “few are actively trained or prepared for war,” ISW said. Only about 10 percent of them receive ongoing training after they complete their basic military service, it added.

How significant is Putin’s partial mobilization?

Rob Lee, a senior fellow in the Foreign Policy Research Institute’s Eurasia Program, characterized Wednesday’s announcement as “one of the most significant/riskiest political decisions Putin has ever made.”

In the short term, Lee wrote on Twitter, the partial mobilization of reservists and new measures to forcibly extend the contracts of volunteers currently serving in Ukraine “could be enough to prevent a collapse of Russian forces. Otherwise, Russia’s manpower issues could have become catastrophic this winter when many short-term volunteers likely would not sign another contract.”

“But the war will now increasingly be fought on the Russian side by people who do not want to be there,” Lee added, likely fueling a lack of morale and unit cohesion among Russian forces.

Reserves are essential components to many countries’ war efforts. For example, nearly half the U.S. service members deployed to both Afghanistan and Iraq over the past 20 years reportedly came from the National Guard and Reserves and took about 18 percent of the casualties.

Why would Russia need a partial mobilization?

Moscow is facing a significant manpower problem, despite recent recruitment efforts, including enlisting prisoners and sending volunteers to the front line with little training, analysts said. “[Vladimir] Putin likely hopes to improve Russian force generation capabilities by calling on the Russian people to volunteer for a war to ‘defend’ newly claimed Russian territory,” the Institute for the Study of War, a U.S. think tank that closely tracks the conflict, said of the annexation plans.

Shoigu said on Wednesday that Moscow has lost 5,937 soldiers in the war in Ukraine — the first official figure on sustained casualties Russia has given since the end of March, when its Defense Ministry claimed 1,351 soldiers had died. Shoigu’s speech, coming on the heels of Russian President Vladimir Putin’s “partial mobilization” of Russian troops, highlights an apparent contradiction between the relatively low casualty count claimed by the Kremlin and its moves to call up reservists.

“There’s no perfect number,” CIA Director William J. Burns told the Aspen Security Forum in July. “I think the latest estimates from the U.S. intelligence community would be ... something in the vicinity of 15,000 killed and maybe three times that wounded, so a quite significant set of losses.”

Colin Kahl, U.S. undersecretary of defense for policy, said last month that “the Russians have probably taken 70 or 80,000 casualties in less than six months,” a number that includes soldiers who were killed and wounded in combat. “That number might be a little lower, a little higher, but I think that’s kind of in the ballpark, which is pretty remarkable considering that the Russians have achieved none of Vladimir Putin’s objectives at the beginning of the war,” Kahl said.

Who within Russia will be called up to serve?

According to Putin and Shoigu, the mobilization will affect Russians who served in the military and are now listed as reservists as well as those who have military occupations, which could include medical workers and various technical specialists. “Only citizens who are currently in the reserve and, above all, those who served in the Armed Forces, have certain military specialties and relevant experience, will be subject to conscription for military service,” Putin said Wednesday, adding that they will receive “additional military training.”

Russian law experts note that the 300,000 people cap announced by Shoigu can be revised up if necessary as the decree issued by the Kremlin is broad — likely on purpose, to allow for reinterpretation.

In a move likely to inflame tensions within Russian society, the head of the Russian parliament’s defense committee, Andrei Kartapolov said the geographic distribution of reservists would be based on population size, meaning that the most populated regions of the country, including the capital, Moscow, would have to send the highest number of soldiers. “Each [region] of the Russian Federation receives a distribution order based on its capabilities,” Kartapolov said Wednesday.

How long will soldiers have to serve under partial mobilization?

The Kremlin did not specify Wednesday how long reservists called up under the new partial mobilization would have to serve — and the presidential decree is light on details. “The decree does not give any details of mobilization and is formulated as broadly as possible, so the President leaves it at the discretion of the Defense Minister,” Pavel Chikov, a lawyer who leads the Agora International Human Rights Group, wrote on Telegram.

Putin’s decree also automatically prolongs existing soldiers’ contracts “until the end of the period of mobilization,” barring them from leaving the front lines indefinitely. This would potentially affect thousands of men who already signed short-term contracts as part of a nationwide recruitment campaign largely viewed as “shadow mobilization” that sought to replenish losses over the summer without officially acknowledging that the operation requires a wider effort.

How will the partial mobilization work?

Chikov, the human rights lawyer, said the process will start with reservists receiving their mobilization orders. This has already started happening, according to those on the ground: Four people in different Russian cities told The Washington Post they have either received the summons or saw officers hand them to their colleagues or relatives. They requested anonymity to speak freely.

“These are men who have served in the army and have signed a contract to stay in the reserve,” Chikov said, adding that the next wave of orders will affect reservists falling into three categories depending on their age and rank.

According to Chikov, the Ministry of Defense will form quotas for mobilization for each of the 85 regions of Russia and officials there will be responsible for implementing the quotas. Last week, several regions backed a proposal from the head of the Chechen Republic, Ramzan Kadyrov, to “self-mobilize” by pledging to send volunteer units with 1,000 soldiers to war.

How did Russians react to the partial mobilization announcement?

Rumors of a military mobilization first spread in Russia in February and March — in the early stages of what the Kremlin continues to call its “special military operation” in Ukraine — and led to a mass exodus of Russians, who fled to nearby Turkey, Georgia and Armenia.

Following Putin’s address Wednesday, Russian airfare aggregators reported that all direct flights from Moscow to the few visa-free destinations still available to Russians had sold out within minutes. Much of the discussion on Russian social media revolved around possible ways to flee the country.

Some Russians seeking to avoid being called up will find other countries’ borders shut to them: On Wednesday, the foreign minister of Latvia, a member of the European Union that shares a land border with Russia, said his country “will not issue humanitarian or other types of visas to those Russian citizens who avoid mobilization,” citing security concerns.

Foreign Minister Edgars Rinkevics also said Latvia will press forward with restrictions on border crossings for most Russian nationals with Schengen visas, which the country announced earlier this month along with fellow Baltic nations Estonia and Lithuania.

The European Union has already banned Russian flights from E.U. airspace and recently agreed to suspend a visa facilitation accord with Russia, making it more difficult and expensive for Russian tourists to get visas.

It’s not immediately clear whether Russia’s own border will be shut for all potentially eligible Russians or just to those who already received summons. The Kremlin on Wednesday afternoon declined to comment on that, only saying that “clarifications will be available later.”