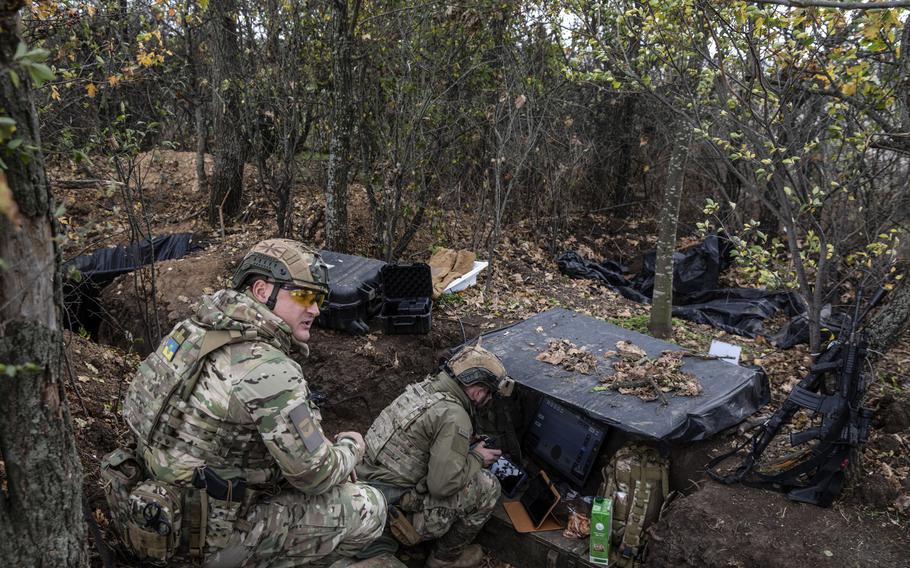 Ukrainian Maj. Volodymyr Voloshyn watches a military drone operator, Arthur, as he communicates with an artillery brigade to direct their fire in the Mykolaiv region in southern Ukraine on Oct. 5. (Heidi Levine/The Washington Post)

MYKOLAIV REGION, Ukraine — The drone operator ignored the occasional thunder of outgoing artillery in the distance and kept his eyes focused on the computer monitor in front of him, waiting for the burst of smoke to appear. His thumbs pushed the joystick left, then right, before moving to his cellphone screen to report where the artillery should aim next.

Some three miles from Ukraine’s southern front line, U.S.-provided M777 howitzers were pounding the Russian forces who were refusing to yield any more ground.

Another soldier, whose call sign is “Dobriy,” then informed his comrades in this Ukrainian special forces unit that their drone wasn’t the only one in the sky. He had just been told that a Russian Orlan reconnaissance UAV was headed this way, and if they were spotted, shelling would surely follow. The day before, the field behind this short trench line was littered with rockets. “That was especially for me,” Dobriy said with a grin.

His commander, Col. Roman Kostenko, now looked concerned. “Should we leave?” he asked, referring to himself and The Washington Post journalists he brought with him. “Too late,” answered Arthur, the drone operator, still not taking his eyes off the screen in front of him. 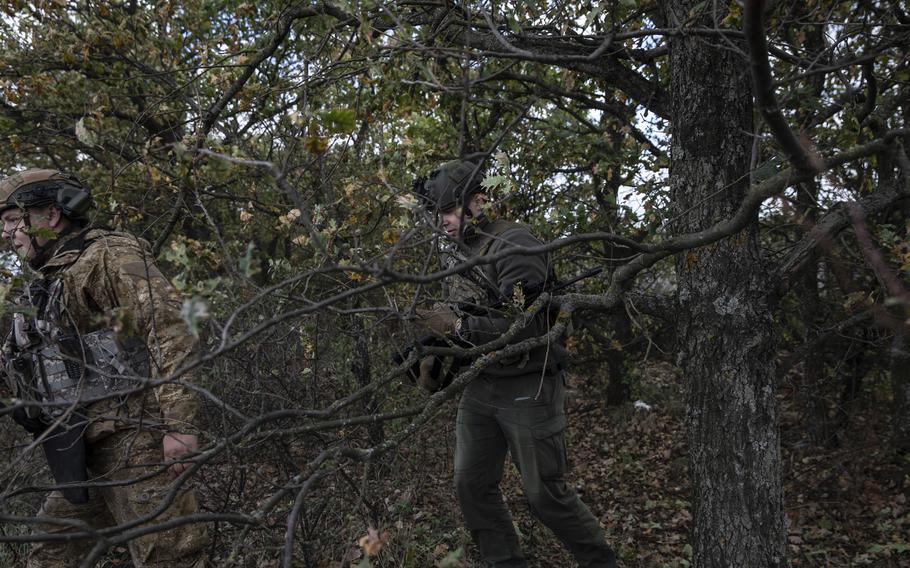 Ukrainian forces near a drone position in the Mykolaiv region on Oct. 5. (Heidi Levine/The Washington Post) 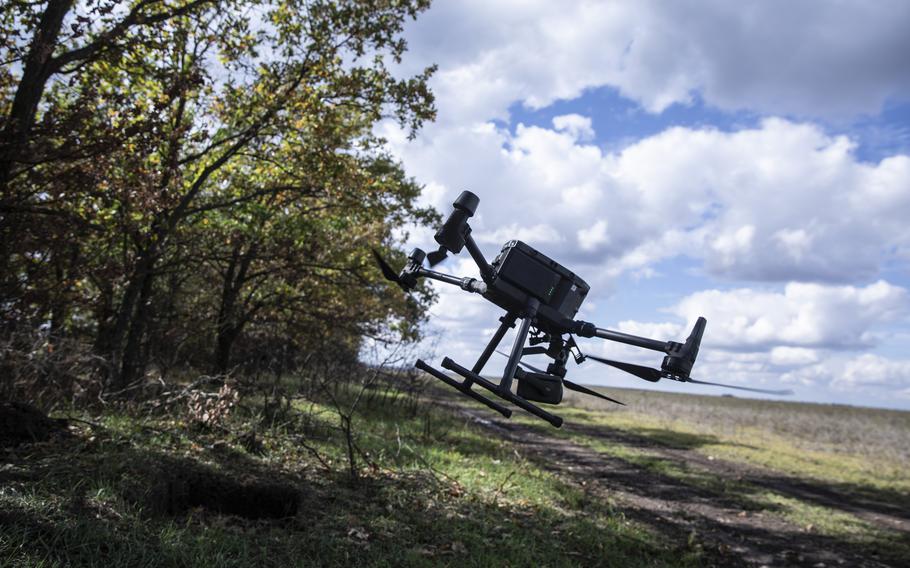 A Matrice 300 drone at a Ukrainian military position in the Mykolaiv region on Oct 5. (Heidi Levine/The Washington Post)

A day after Ukrainian forces reclaimed more territory in the southern Kherson and Mykolaiv regions, the jubilation of a breakthrough at this part of the front line was tempered by anxiety over an expected hard fight ahead.

Kyiv’s military here has pushed the Russians back by dozens of miles in some spots after struggling to advance for months. But after Ukraine’s remarkably successful counteroffensive in the northeast Kharkiv region, soldiers stationed near the southern front cautioned that the situation remains tense. Kherson is too important, politically and militarily, for the Russians to retreat as messily as in Kharkiv, they said.

“This is not Kharkiv,” Kostenko said. “There, they left all of their ammunition and vehicles and fled. Here, we don’t even have many trophies. They just retreated from the fight, took everything with them to their new position and are digging in anew.”

What the Ukrainians have observed is an orderly Russian pullback from some towns and villages in what could be preparation to tighten the front line around the city of Kherson, the lone regional capital Moscow’s forces have captured since their invasion began last February, and the neighboring town of Nova Kakhovka. It is home to a hydroelectric power plant that also controls a vital water supply to Crimea, which Russia illegally annexed in 2014. Seizing the plant and restoring the water flow, which Ukraine had cut off, was one of Russia’ top military objectives in the early days of the invasion.

The Ukrainian advances come as the Russian force finds itself in an increasingly precarious position in and around Kherson. The city is situated on the only slice of territory the Russian military controls west of the Dnieper River. The land is flat, making it particularly difficult for Russia to defend.

The slice of occupied land is connected to the rest of Russian-controlled territory by two main crossings over the Dnieper — the Antonovsky Bridge in Kherson, which is badly damaged, and the Kakhovka hydroelectric dam, which is about 45 miles to the east and remains passable.

Russian forces risk getting cut off in Kherson — surrounded by Ukrainian forces on three sides and the river on the fourth — if the Ukrainians manage to advance close enough to the river to make it impassable.

“If the Ukrainian military is able to get artillery within range of the main bridges and river crossings, then the Russian position in general may become untenable,” said Michael Kofman, a military analyst at Virginia-based research group CNA.

Cautious military strategy would call for retreating over the river rather than bearing the risk of getting surrounded or besieged in Kherson. But the Russians are likely to fight to hold Kherson because it is the capital of a region that Russian President Vladimir Putin claims to have annexed.

The city and its environs would also serve as a helpful bridgehead on the western side of the river for the Russians, should they manage to reconstitute their combat power and go on the offensive seeking to capture the port cities of Mykolaiv and Odessa.

“We think it unlikely the Russian leadership would sanction a full pullout from Kherson for political reasons,” said a Western official who insisted on anonymity to brief reporters about sensitive security information. “So this situation in the south could become increasingly messy with, potentially, a more desperate Russian force with backs to the river.”

“It won’t be an easy rush through unconstrained territory,” the official added. “They will have a challenge there.”

So far, the Ukrainians have made the most progress pushing the Russians back northeast of Kherson. How fast the Russian front might collapse depends on whether the Russians have set up echelon defenses to fall back on between the front and the city.

Unlike in Kharkiv, where local militiamen and Russian national guardsmen were primarily manning a front that fell quickly, Russia has put more seasoned forces — paratroopers and marines — in and around Kherson. They are tougher adversaries, but even those units now seem disjointed due to heavy casualties.

Capt. Andriy Pidlisnyy said his Ukrainian military unit in the Mykolaiv region recently captured a Russian prisoner who explained Moscow’s manpower problems like this: In the prisoner’s three-man tank crew, all three were from different units within Russia’s forces.

The prisoner, a paratrooper, was the driver. The commander, was a mercenary from the Wagner paramilitary outfit. And the gunner was mobilized from the occupied Luhansk region, which is under the control of Kremlin proxies.

“If even at the tank level they have such a hodgepodge from different units, then at the level where there is a company, battalion and brigade, it’s clear that there can be no normal coordination,” Pidlisnyy said.

Ukraine is now looking to take advantage of a key transition period for Russia, before the reinforcements from Putin’s recent mobilization arrive at the front. Near the recently liberated settlement of Davydiv Brid, there was a flurry of activity on the road Wednesday as Ukrainian forces moved pontoon bridges, self-propelled howitzers, and armored vehicles. Kostenko’s drone unit prepared homemade explosives in recycled soda cans to drop on fields around Davydiv Brid — an inventive demining tactic.

The Ukrainian counteroffensive, pressing on two fronts, is now moving so fast that even soldiers on the ground have trouble keeping up.

“Is Snihurivka ours already?” Kostenko asked his deputy, referring to a town in the Mykolaiv region that has been a stronghold for Russian forces since the early days of the war.

Retaking Davydiv Brid and Snihurivka would give the Ukrainians access to roads leading deeper into the Kherson region and add pressure on the Russians from the northwest.

The men are both from southern Ukraine themselves, as is the rest of their 29-man unit. Kostenko, a member of Ukraine’s parliament, splits his time between here, Kyiv, and international trips to lobby for Ukraine to receive more weapons. On a recent visit to Washington, he asked members of Congress for more tanks and armored personnel carriers.

His own hometown of Charivne in Kherson region is still occupied. Staring at a tablet with a map of the village on Wednesday, he pointed out to a drone operator where his house is located. “Whatever you do, don’t let anyone fire there,” he joked.

Expelling Russian soldiers from his backyard is a personal priority. And while he doesn’t expect it to be easy, the recent gains have convinced all of Ukraine that it is possible.

“The success of the counteroffensive in Kharkiv really motivated fighters here,” Kostenko said. “The instinct is to be cautious, but sometimes you have to shove your foot in there to see it’s not that scary and you can go further. When what happened in Kharkiv showed that we can do it, the result came here, too. We started pushing ahead.”

Sonne reported from Washington. The Washington Post’s Emily Rauhala in Brussels contributed to this report.