On the front lines, Ukrainian women often are the first responders 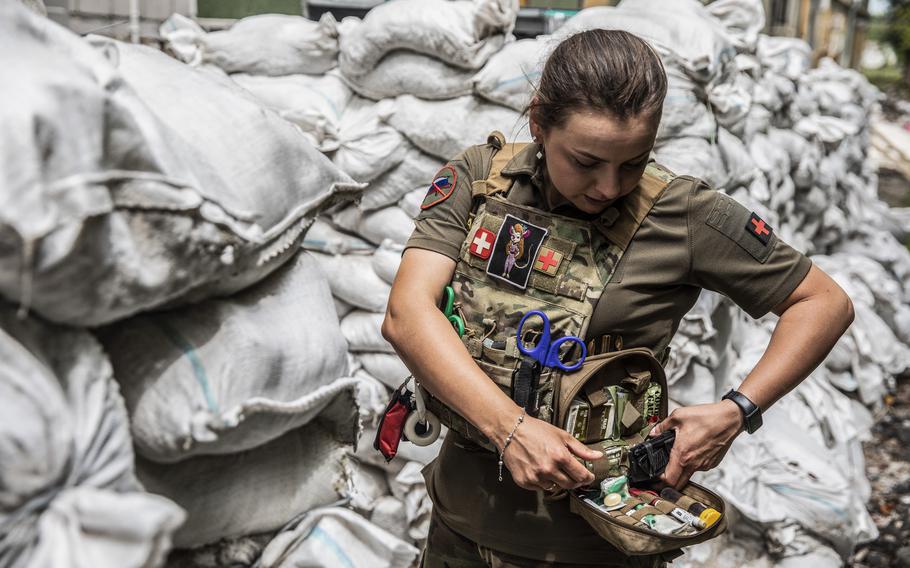 Hanna Khurava wears her bulletproof outside a hospital in Kramatorsk on June 30, 2022. (Heidi Levine/for The Washington Post)

BAKHMUT, Ukraine — Alina Mykhailova was asleep on the floor of an empty warehouse, the only woman amid dozens of soldiers getting what rest they could after days of fighting. She awoke at the sound of an explosion, such a frequent occurrence on Ukraine’s front lines that it didn’t disturb most of her exhausted companions.

“I had a strange feeling about this one,” said Mykhailova, a medic in an army assault company, and she was already dressing when she got the call: A Russian missile had hit the unit.

Mykhailova sped to the location and found a soldier with gaping wounds in his belly. They loaded him into the converted Volkswagen Transporter for the rough hour-long drive to the hospital. “Every time we hit a bump, he groaned,” she said. “I realized there must be shrapnel moving in his body, cutting the organs.” 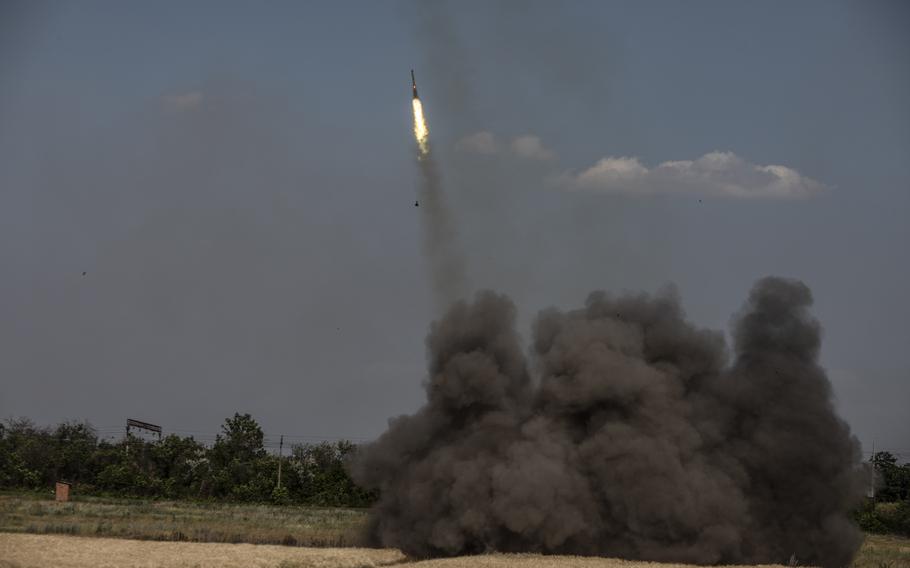 Ukrainian forces fired a Grad artillery battery in Perelzne, Ukraine, a village west of the embattled city of Lysychansk on July 1, 2022. (Heidi Levine/for The Washington Post)

Weeks later, she recalled that the patient’s blood pressure was plummeting so she improvised a treatment, packing gauze into the wounds to keep the sharp metal from shifting dangerously and slicing vital organs. At no time has her wartime transformation been more striking: From vegetarian political science major in Kyiv to combat medic on the front lines.

“I was simply a girl who liked to snowboard,” she said, sitting in her ambulance with the sound of artillery all around, waiting for the next call as casualty rates spike under Russia’s withering attacks along the eastern front. “But I decided this is where I needed to be.”

The front line units fighting against Russia’s push to take control of the entire Donbas region are overwhelmingly male. But when the men are wounded, often a woman jumps out of the ambulance.

Women now account for about 22 percent of Ukraine’s military, a climb that began with the Russian-backed war in the east starting in 2014 but has soared since Russia’s full-scale invasion four months ago, according to Kateryna Pryimak, co-founder of Ukrainian Women Veteran Movement.

“Since February, the numbers of women signing up keeps growing and growing,” she said. 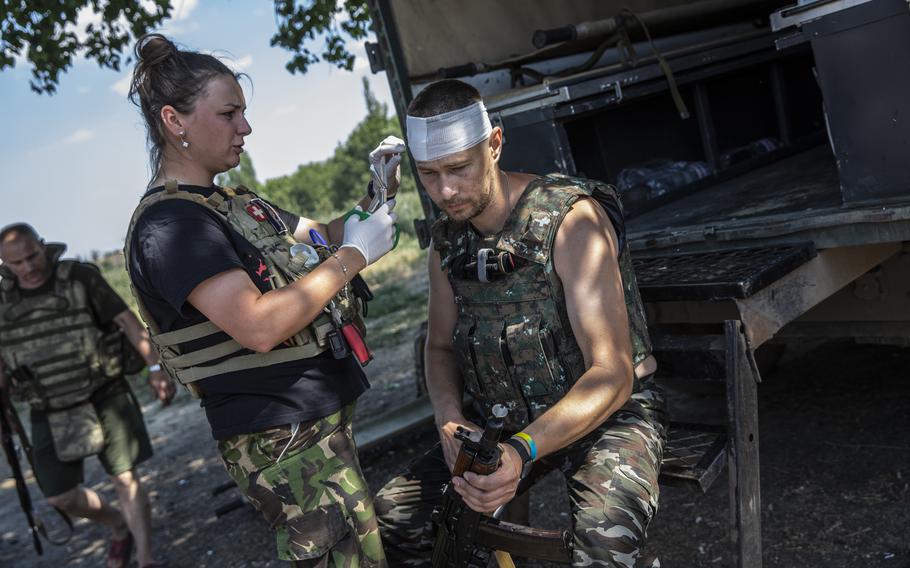 Hanna Khurava has seen a big jump in the number of women serving in front-line units since she became a medic in 2016. Then, women served mostly in support roles and cooked in unit kitchens. “Now I see women drivers, mechanics, medics, machine gunners, commanders.”

A few weeks before Russian tanks rolled across the borders, Khurava married the soldier who drives her ambulance. “Nice place for a honeymoon, right?” she asked, looking around at the sandbags banked against the hospital in Kramatorsk where she brings many of the casualties.

Her new husband tried to dissuade her from joining the front-line effort, telling her it was his time to take risks and her time to be safe. She told him nothing had changed with their exchange of rings.

On Friday, the couple was spending a 24-hour shift in a village west of the embattled city of Lysychansk. Their ambulance was parked under a tree to shield it from being seen by Russian drones, next to a dugout bomb bunker covered in logs and earth.

It had been quiet until a Ukrainian Grad artillery battery erupted in smoke and thunder just across a village pasture. The Grad, a Soviet-era mobile rocket launcher, can launch a salvo of up to 40 122-mm projectiles, then speed away before the Russians can lock onto the location and return fire.

Within seconds after the barrage, a whistling boom sounded and a massive plume of smoke billowed from the Grad’s launch spot. And another. And another.

“We fire the Grad, and then the Russians retaliate,” Khurava said as she pulled on her flak vest.

Sure enough, 20 minutes later a group of soldiers screeched to halt by the ambulance. They were carrying a soldier with shallow wound on his forehead from one of the blasts.

“Come back to get the bandage changed,” she told the soldier after she had patched him up.

Women who travel into the most dangerous parts of the war say they do face resistance, often from male partners, parents and older soldiers who see their own wives, sisters and daughters in the faces of the young medics. 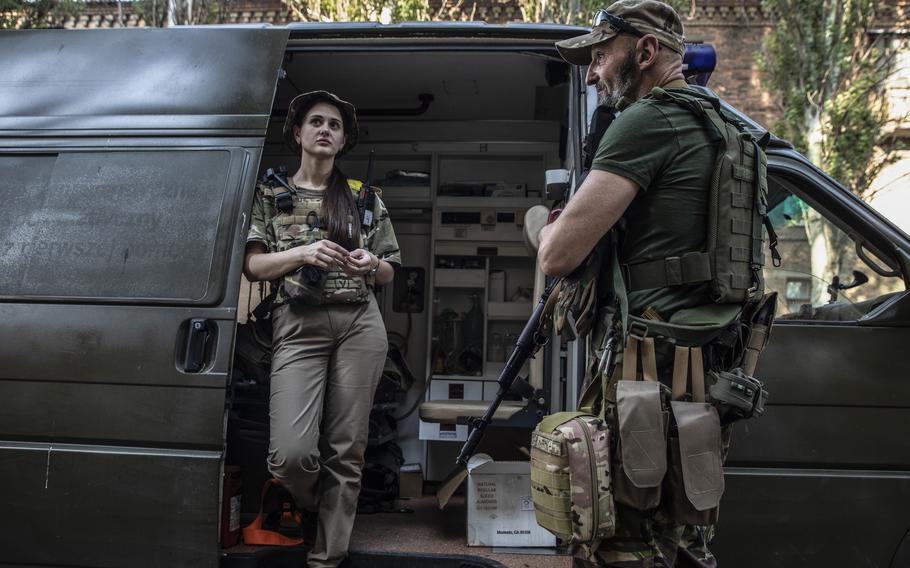 Liana Nigoyan, 24, and Annril Borysov, 53, both medics in the Ukrainian military, as they wait to deploy out of Bachmut, Ukraine on June 28, 2022. (Heidi Levine/for The Washington Post)

“Right now, I am basically lying to my parents,” said Liana Nigoyan, a 24-year-old medic who deploys out of Bakhmut. “They think I’m working at a good job opportunity in Kyiv.”

Nigoyan was a nurse in a clinic in Dnipro when the war started. She had been a volunteer medic in 2016 and signed up for the army medical corps immediately.

But four months later, she still fears it would be too upsetting for her father, who has a heart condition, to know she has exchanged the sterile calm of a private practice — ”Everything was white; everything was quiet” — for a routine of ducking and counting to eight after an artillery strike before she sprints to the next patient.

The shift was hard for her, too. Her first battlefield casualty, a soldier shot by a sniper, died in her ambulance. The urgent reality of her new work hit her hard, she said. She was more steeled for the second call, a machine-gunner hit by shrapnel.

“We saved him,” she said. “One of the other guys in the unit, a veterinarian, helped me.”

Dozens of a subsequent calls have taught Nigoyan, who can’t find body armor small enough to fit her properly, to exude confidence with soldiers who are bigger, older and more battle-hardened.

“If I have to be strict, I can be,” she said, recalling one wounded soldier she overruled when he asked her not to cut off his pants out of modesty around a woman. “It helps to relax them for me to be sure of what I’m doing.” 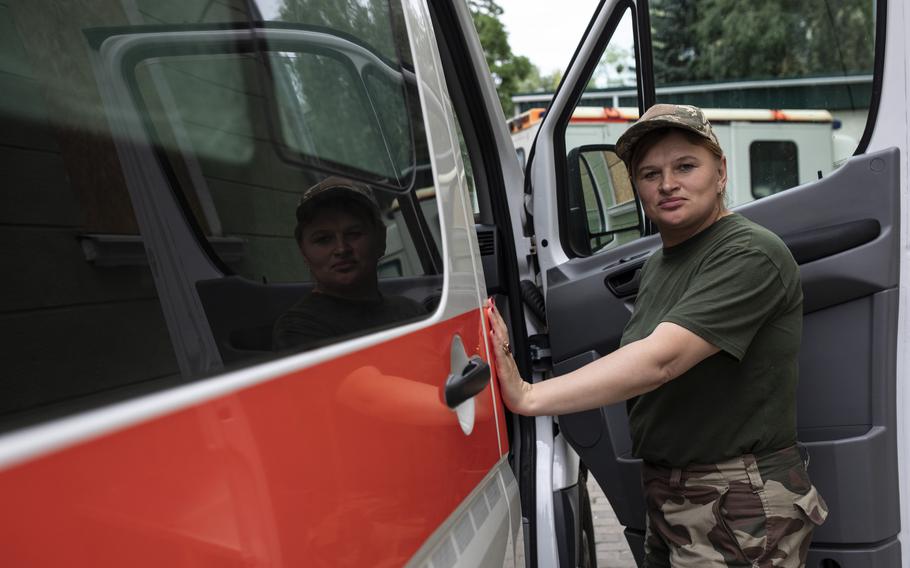 Irina Pukas, a 13-year veteran of the Army Medical Corps as she waits to be deployed outside a hospital in Kramatorsk, Ukraine on June 30, 2022. Pukas said she has honed a blend of maternal care and combat cred to be a more effective medic to soldiers who are often younger than her own grown sons. (Heidi Levine/for The Washington Post)

Irina Pukas, a 13-year veteran of the army medical corps, said she has honed a blend of maternal care and combat cred to be a more effective medic to soldiers who are often younger than her own grown sons.

Her artillery unit was hit hard by Russian shelling a few weeks ago. After treating the injured — and securing the dead — she was asked to help a group of soldiers who were so frightened they refused to take off their vests and helmets even after they had been evacuated to safety.

“I tried to relax them as both a mother and a soldier,” said Pukas, 48. “It helped that I was woman, and also that I could tell them I have been under serious shelling myself, many times.”

Life on the front lines means toggling between war life and personal life. On a recent afternoon between calls to the front, two medics hurried outside a hospital in Sloviansk to be with a friend when her soldier-boyfriend proposed to her.

“He’s coming back from the front and said for her to be here at 3 o’clock and to change into nice shoes,” said Maria Budnichenko, 20, one of the medics. Her friend, waiting on a bench, was wearing a spangled slippers with her green fatigues.

The soldier, on one knee, popped the question a few minutes later in front of a cheering crowd of their unit mates.

Back in the bumping ambulance, Mykhailova, who wears a pair of trauma sheers on her flak vest and a Glock 9mm handgun on her hip, needed all her experience to keep her patient with internal injuries alive. At the hospital, they woke doctors who wheeled the wounded man in for six hours of surgery.

When the doctor came out, she asked, “Who packed this man’s wound so full of gauze?”

Mykhailova remembers panicking before raising her hand; that had been her improvised treatment.

“Good work,” the doctor said. “That is one of the reasons he is alive.” Mykola Kovtun, a Ukrainian soldier as he kneels down to propose marriage to Natalia Tkachenko, 32, during a surprise engagement celebration held at a hospital in the eastern Ukrainian city of Sloviansk on June 30, 2022. Tkachenko works as a military nurse. (Heidi Levine/for The Washington Post) 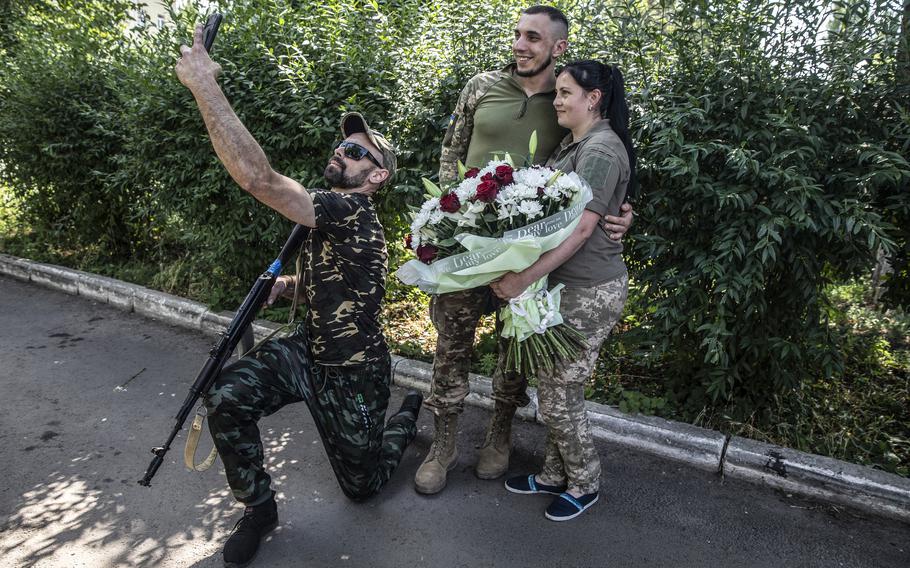 Natalia Tkachenko, 32, and Mykola Kovtun, as they pose for a photograph during their engagement celebration at a hospital in the eastern Ukrainian city of Sloviansk on June 30, 2022. Tkachenko works as a military nurse and her fiancé just came from the front lines to propose marriage to her. (Heidi Levine/for The Washington Post)