A recruit repacks his gear during 16 days of military training in northern Poland. (Kasia Strek, Panos Pictures/for The Washington Post)

WARSAW — A few days after Russian troops stormed into Ukraine in February, Eryk Klossowski issued an unusual request to senior staff at the Polish utilities company he headed. War was raging across the border. It was time, he reasoned, for his team to expand its corporate training. Everyone should learn how to shoot a gun.

“Russia can still take more military steps and can trigger asymmetrical threats, like terrorist assaults,” said Klossowski, 46, who now is planning weapons training for hundreds of rank-and-file employees in after-work sessions this fall. “Everybody needs to be prepared.”

The war in Ukraine has marked a new era of Russian aggression, rekindling the threat of nuclear war and unleashing global food and energy crises that have sent prices soaring worldwide. But for neighboring countries, long familiar with the Russian threat, the war is provoking something more: a national call to arms.

Across eastern and northern Europe, polls show strong support for the NATO alliance and faith in the United States to honor mutual defense treaties if the Kremlin — still facing a far more difficult fight than it bargained for in Ukraine — threatens others in the years ahead. But countries living in Russia’s shadow remain unwilling to leave their fortunes to chance. They are moving to rapidly build up domestic military might, while also witnessing a renaissance in civilian readiness that harks back to the darkest days of the Cold War.

Poland, a Warsaw Pact nation under the Soviet Union’s boot for more than four decades, is today Moscow’s harshest critic in Europe. To face down a belligerent Russia, officials here are vowing to double the size of their armed forces to 300,000 troops, even as some politicians seek to loosen strict gun laws to put more weapons in civilian hands.

About 94% of Poles see Russia as a “major threat,” up from 65% in 2018, according to a new Pew Research survey. And 14 years after doing away with the draft, a plurality of Poles favors bringing back some form of army conscription.

As they step up to be counted, the country with the lowest rate of gun ownership in Europe is witnessing a surge of enrollment in its Territorial Defense Force, akin to America’s National Guard, as well as sharp interest in combat and survivalist courses and slots for training at gun ranges.

“Society has stepped out of its glass bubble,” said Krzysztof Wojcik, the 29-year-old founder of a nonprofit that provides survivalist and weapons instruction to civilians and has seen a dramatic jump in interest since the war in Ukraine began.

“People have long thought they are completely safe, that nothing will happen and the army is not needed,” said Wojcik, standing under a hot summer sun at a training center 87 miles from Warsaw, where 40 civilians were taking military-style courses paid for by the government. “It is no longer the case.”

Ukrainian success in deploying armed civilians to augment regular forces appears to have inspired Poland and other nearby nations to see a winning model in the “civilian soldier.” Here, the call to arms is extending beyond the traditional military, into boardrooms and even Polish schools. As soon as September, children as young as 13 are slated to begin limited weapons training.

“This is clearly the effect of war,” Education Minister Przemyslaw Czarnek said in an interview. “Ten years ago, if a minister in office had proposed that elementary school students have these kinds of classes, he would have been laughed off. However, what we have witnessed [in Ukraine], and the way this war was waged with such atrocities, showed us that the danger is real.”

“These are needed skills,” he added. “It’s not about the militarization of children, it’s about skills that would be useful for safety and security if the conflict escalates.”

The invasion has prompted a similar rethinking in Sweden and Finland, which broke decades-long taboos and applied for NATO membership this year; both have witnessed a huge surge in recruits signing up for voluntary defense forces. Lithuania — a Baltic nation and former Soviet state — is also witnessing a spike in personal weapon sales, including handguns and semiautomatics. Maks Seroczynski, a recent high school graduate considering a military career because of the war in Ukraine, learns about weapon safety and trains in shooting during weekend workshops organized at an outdoor shooting range in Wloclawek, Poland, in late June. (Kasia Strek, Panos Pictures/for The Washington Post) 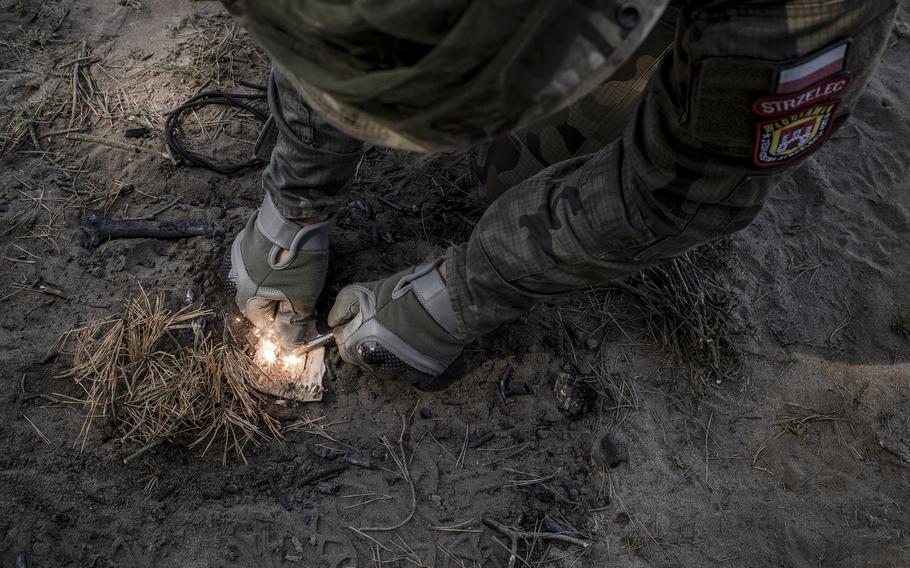 Interest in both personal combat training and private gun ownership has skyrocketed in the Czech Republic, the site of the Prague Spring, which was violently put down by the Soviet Union in 1968. There, the number of volunteers signing up for active army reserves is so high that officials say they are unable to process all the applications. Czech weapon sellers and firing ranges have also been besieged by citizens eager to buy guns and learn or improve shooting skills.

“People don’t believe the state would be able to protect them,” said Martin Fiser, owner of a shooting school in Prague where skyrocketing demand has filled spots for new students until September. “Our army is tiny.”

Perhaps nowhere is the response more startling than in Poland.

In a country dominated by hard-right politics, the tough gun laws stood as a rare exception to the agenda of the ruling Law and Justice party. Per capita, Poland’s population of 38 million sees relatively few guns in civilian hands — with 2.51 firearms per 100,000 people, compared with 19.61 in France and a whopping 120 per 100,000 in the United States.

Observers here say that is largely a product of the communist era, when Poland’s Soviet masters frowned on private gun ownership to the point of discouraging even hunting. For better or worse, Russia’s attacks in Ukraine are giving lift to efforts to change and liberalize those laws.

“Right now, we are the most unarmed society in Europe,” said Jaroslaw Sachajko, a national lawmaker from the Kukiz’15 party and co-author of legislation that would make it easier for Poles to obtain guns — a process that now requires psychological assessments, written tests and extensive police reviews.

“All of our neighbors have a larger number of guns per capita. The Czechs. The Germans. Why should it be the case that they have easier access to weapons?” he said. He added: “We can see in Ukraine the way that weapons and weapons training has helped their effort” against the Russians.

At a shooting range in an old car factory on the outskirts of Warsaw, Artur Kwiecinski, a 47-year-old pharmaceutical executive, spoke over the din of live fire. One of a local gun club’s 400 new members since February, he described his motivation as “obvious.”

“It’s the war,” Kwiecinski said. “It’s made personal safety more important. I have a wife. I have son. I need to learn this.”

Civil defense classes, common in Polish schools during the communist era, largely disappeared in recent decades as the fall of the Berlin Wall and then Poland’s accession to NATO and the European Union seemed to make the notion of war obsolete.

As the threat roars back to life, Poland is tentatively moving to reintroduce weapons training in schools — including theoretical training in eighth grade and tactical, hands-on training in ninth grade. The instruction will combine virtual-reality technology and in-person shooting at gun ranges.

“If Russia should ever think to attack Poland, Russia must know, the Kremlin must know, that in Poland, 40 million Poles are ready to stand up, arms in hand, to defend their homeland,” Prime Minister Mateusz Morawiecki said in June while inaugurating a high school shooting range in the southern town of Myszkow. “There is no going back under the foot of Russia.”

Mixing guns and schools might shock some Americans, given the wave of horrific mass shootings in the United States. But the measure has met mostly muted opposition here, with the loudest criticism being that it’s class time wasted or a ploy by the ruling party to curry favor with its base.

“It is strange. We had weapons training when I was at school 30 years ago, and we didn’t think it would ever come back,” said Dorota Loboda, a parental activist and member of the Warsaw City Council’s education committee. “We are not so happy with this. We need more psychologists, more therapists, at school. Not weapons.”

The shift in threat has been most jarring for younger Poles, who largely grew up in an era of peace punctuated by Russia’s aggression in Georgia in 2008 and its forced annexation of Ukraine’s Crimea region in 2014. Both paled in comparison with the full-on invasion of Ukraine, which shattered many Poles’ illusion of safer times. Justyna Muszynska, a 17-year-old high school student, was among those spending a full day last month at the training center northwest of Warsaw — practicing how to build a shelter, put on a gas mask, fire a gun.

“After Russia’s invasion of Ukraine, I realized I know absolutely nothing and have no idea how to protect myself and my loved ones,” she said, taking a break after a lesson in battlefield first aid. “I wanted to learn basic skills.”

Poland is moving to augment its defense might through its Territorial Defense Force. Minted by the Law and Justice party in 2017, its ranks of professional and part-time volunteer soldiers have been derided as the government’s “personal army.” Since spring, it has seen a sevenfold rise in recruitment.

Last Sunday, in forests a few hours outside Warsaw, a wave of new recruits ran through basic weapons training as their instructors barked orders.

“They want to defend themselves, their families and their homeland,” said Lt. Pawel Pinkowski, 40, a company commander and veteran of the wars in Iraq and Afghanistan. “The situation in Ukraine has shown that, indeed, it is better to be prepared.”

Dariusz Kalan in Wloclawek, Poland, and Ladka Bauerova in Prague contributed to this report.