Ukraine to tour exhibition of destroyed Russian tanks in Europe 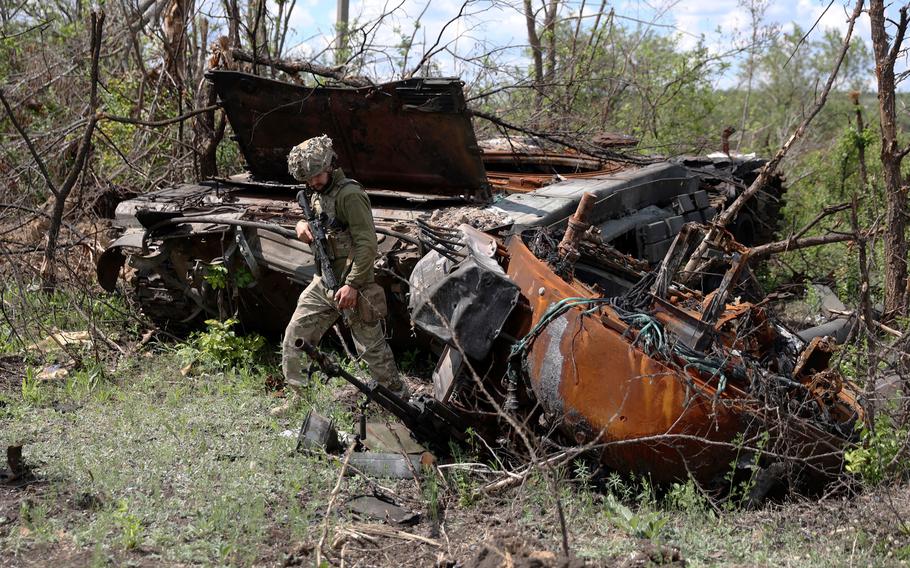 A Ukrainian serviceman inspects a destroyed Russian tank at an abandoned Russian position near the village of Bilogorivka, not far from Lysychansk, Lugansk region, on June 17, 2022. (Anatolii Stepanov, AFP/Getty Images/TNS)

Ukraine is planning to tour an exhibition of destroyed Russian military vehicles across Europe, as it strives to maintain public attention on the conflict.

“We’ll help to ensure that Russian tanks are in Europe, but as scrap,” Defense Minister Oleksii Reznikov told Polish broadcaster Polsat in an interview. Ukraine plans to start the exhibition in Warsaw before moving on to Berlin, Paris, Madrid and Lisbon.

Ukraine claims Russia lost some 1,477 tanks and 3,588 armored vehicles since the invasion began in February. Some of the missiles, burnt Russian tanks and other military vehicles are currently being displayed in downtown Kyiv.

Ukraine is urging the U.S. and its European allies to supply more weapons for its military, which is under heavy barrage of Russian artillery fire in the country’s east. Still, in many European nations, the war is fading from public awareness with citizens increasingly focused on a growing cost-of-living crisis.

The European Union will decide on Ukraine’s bid for candidacy status to join the bloc this week. While the French, Italian and German leaders have already given their blessing, all member states must agree.

Russia doesn’t disclose data on its tank losses in Ukraine. Its forces have destroyed 3,696 Ukrainian tanks and other armored military vehicles since the start of the war, Defense Ministry spokesman Igor Konashenkov said in a televised statement Monday.