Putin alert for signs of eroding Western unity on Ukraine 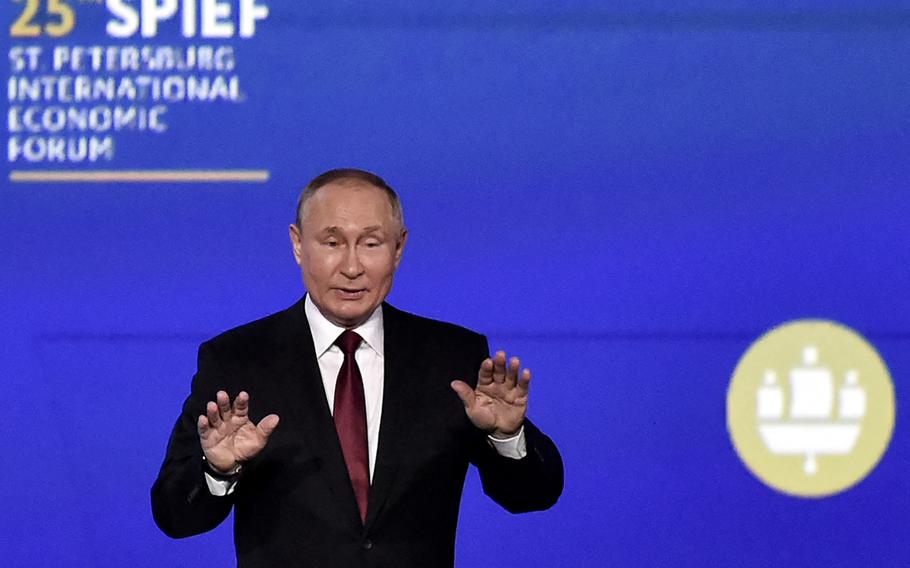 In a much-viewed video this month, the Russian president settled deep into his armchair, wearing an expression of bored nonchalance. In a matter-of-fact tone, he likened himself to a modern-day Peter the Great, the empire-building Russian czar, and suggested that the conquest of a sovereign neighbor's territory was not only justifiable, but laudable.

"Taking it back and strengthening it," the 69-year-old Putin said, describing Peter's 18th-century seizure of a strategic stretch of Baltic seacoast from Sweden. Now, he serenely told a group of Russian entrepreneurs, this duty "has also fallen to us."

It might have been a deliberately over-the-top performance calculated to rattle Western allies at a particularly challenging juncture of the nearly 4-month-old Ukraine war. Such stagecraft comes naturally to the onetime KGB operative, longtime Putin watchers say.

But some observers saw something more: a mask not so much torn off as casually discarded. In launching his full-scale invasion on Feb. 24, Putin cited elaborate pretexts including an unfounded need to "de-Nazify" Ukraine; in the new video, he appeared to revert to an articulation of raw imperial ambition.

"The body language spoke volumes," said Peter Dickinson, Ukraine editor for the Atlantic Council, a Washington-based think tank. "I think he really looked like a man with a weight off his shoulders — that he felt a sense of relief that the burden of maintaining these lies had been lifted."

Since its early days, the war's course has whipsawed from expectations of a swift Russian rollover of the government in Kyiv to an unexpectedly fierce and effective Ukrainian resistance and a grinding stalemate in the country's industrial heartland, in which Russian forces have notched incremental but inexorable-seeming gains.

While the West for months has been seeking to punish Putin for the war with sweeping sanctions, allies of Ukraine are themselves experiencing painful economic blowback in the form of runaway inflation and soaring energy prices. The European Union is struggling to maintain a unified front in the face of disparate national interests, and Ukraine is describing the scale of Western-supplied weaponry as woefully inadequate.

All that comes against the ominous backdrop of a developing global food crisis that the Kremlin shows every sign of seeking to weaponize in coming months, with vast stores of Ukrainian grain mired in blockaded seaports and negotiations to ship it out to a hungry world at an apparent impasse.

Putin, speaking at an economic forum Friday in St. Petersburg, mocked the idea that his war caused record-setting inflation in the United States and Europe, or could trigger famine in parts of the developing world.

"We all hear about so-called 'Putin inflation' in the West," he said, calling the notion "stupid." As for the blockaded grain, he declared that resulting hunger would be "on the conscience of the U.S. administration and the 'Eurocrats.'"

As was the case during the run-up to the war, Putin's motives can be read as both bafflingly opaque and blindingly obvious. In Western capitals, the war is generally viewed as a huge miscalculation on the Russian leader's part. But to many observers, there is a dogged internal consistency to his actions.

"I don't see Putin's worldview as shaken and changed" by setbacks such as the failure to capture Kyiv and topple President Volodymyr Zelenskyy's government in the war's early days, said Gustav Gressel, a Ukraine expert at the European Council on Foreign Relations. "The destruction of Ukraine as a whole is still the aim, the eradication of the Ukrainian nation."

Western unity, though, faces an array of challenges. The North Atlantic Treaty Organization has been energized by the war, but the alliance's annual summit at the end of the month is throwing internal tensions into sharp relief. Membership applications from Sweden and Finland, galvanized by the Russian invasion, are on hold while NATO weighs how to assuage Turkey's anger over the two nations' relationships with Kurdish separatists.

Russian state television daily depicts a West in disarray and decline, a propaganda effort helped along by gruesome real-life events such as mass shootings in the United States and the drumbeat of revelations over the Capitol insurrection in 2021.

But last week saw a significant symbolic boost for the image of Western unity, when the leaders of France, Germany and Italy visited Kyiv, and notably refrained from putting any public pressure on Zelenskyy to seek a negotiated end to the fighting.

Prior to the visit Thursday, Ukraine had taken serious umbrage over French President Emmanuel Macron's contention that it would be unwise to "humiliate" Russia, and a top Zelenskyy advisor acknowledged fears that the heads of the European Union's most powerful economies would deliver a joint message that the onus was on Ukraine to seek peace.

Instead, Macron declared that "Europe is at your side" and that Ukraine would "choose its own destiny." The following day, the EU's executive arm recommended giving Ukraine a path to eventual membership in the bloc, and British Prime Minister Boris Johnson paid a second visit to the Ukrainian capital, promising military training and more armaments.

At the St. Petersburg forum last week, Putin professed indifference about Kyiv's EU aspirations, but predicted if Ukraine did join the bloc, other member states would tire of subsidizing it — pointedly ignoring the fact that the invasion has devastated the Ukrainian economy.

EU membership, however, is not likely for years, and even if a path to accession offers a morale boost, Ukraine is far more focused on what it calls a dire shortage of long-range weapons needed to fend off Russia's onslaught in the east. Moreover, European energy dependence on Russia is still likely to be a driving force behind efforts to push Ukraine to accept concessions in exchange for a potential peace.

Before the war began, the Western allies threatened Moscow economically in hopes of staving off the invasion, and when that failed, turned to the sanctions as a means of pressuring Putin to desist. But even as rising energy profits continue to fuel Moscow's war effort, the Russian leader is doing all he can to exploit Western consumer discontent over inflation, which is raging in the Eurozone as well as in the United States.

"It furthers the narrative that the West does not have the ability and the will to withstand Russia," Gressel said.

While Western leaders like President Biden face plummeting poll numbers over inflation, the Ukraine war points up the extent to which Putin is insulated from either electoral accountability or significant expressions of dissent. Expressing opposition to the "special military operation" in Ukraine is a crime, and key Russian opposition figures are behind bars.

"Public opinion in Russia does exist," Dickinson said. "It's just not nearly as important as it is in a democratic country."

Throughout the war, the Kremlin has brushed aside war-crimes accusations as fabricated by Ukraine and the West. But heading into a fifth month of increasingly brutal warfare, any notion of accountability is vanishing altogether in the upper ranks of Putin's government.

"Russia is not squeaky clean. Russia is what it is," Foreign Minister Sergei Lavrov told the BBC last week when asked about a United Nations report of atrocities committed against civilians in a village in northern Ukraine. "And we are not ashamed of showing who we are."