Gas rationing is getting closer for Europe 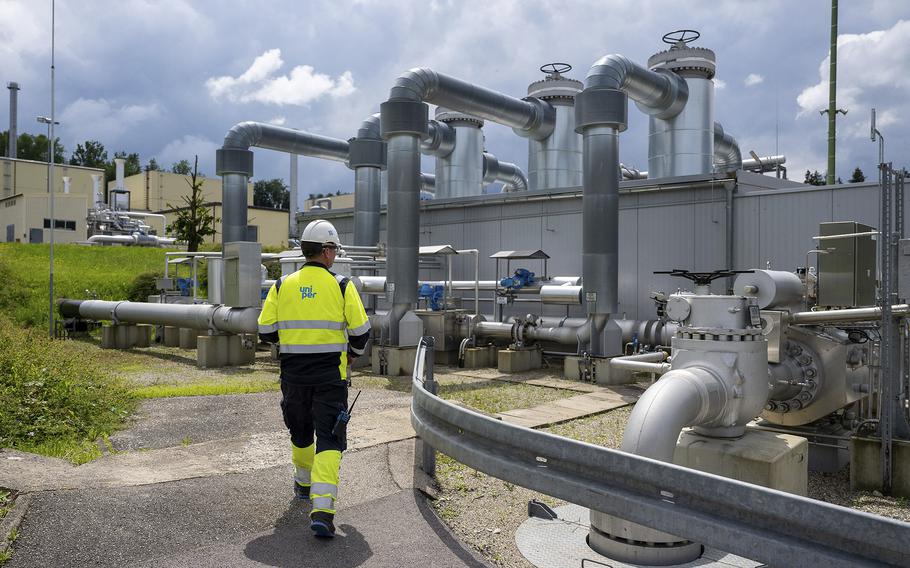 Throughout the entire Cold War and in the decades since, Russia was a stable supplier of gas to Europe. That changed this week.

Russia slashed gas supplies in apparent retaliation over Europe's support for Kyiv. After its biggest moves yet to use energy as a weapon, gas rationing in the region is now a very real prospect.

The squeeze caused prices to surge, added pressure to the region's economy and could strain European solidarity — all victories for the Kremlin that came as European leaders underlined support for Ukraine during a high-profile trip to the country.

With European utilities forced to tap reserves intended to cover needs for the winter, government controls of gas distribution could start within months. If Russia completely shuts its main link, the region could run out of supplies by January, according consultant Wood Mackenzie Ltd.

"It's a serious situation, a tense situation," Germany Economy Minister Robert Habeck said in an interview with ARD television on Thursday. "It's a trial of strength between Western allies and Russia."

The heightened alarm was triggered after the Kremlin cut flows by about 60% through the Nord Stream pipeline, which pumps gas straight to Germany. The diminished deliveries had a knock-on effect for France, Austria and the Czech Republic.

Germany's Uniper SE, the biggest buyer of Russian gas in Europe, is receiving 60% less gas than ordered. Italy's Eni SpA received just half of its requested volumes from state-owned Gazprom PJSC on Friday, and France's Engie SA and Austria's OMV AG have been hit as well.

President Vladimir Putin upended decades of reliable energy relations by gradually curbing supplies in small steps since the war started in late February, and then accelerated the moves this week.

"This further reduction is to make storage-refilling challenging at the EU level and to test the EU's fragile unity," said Thierry Bros, a professor at the Paris Institute of Political Studies. "This will continue until the tap is completely shut off."

Propelled by the tensions, European natural gas prices surged about 50% to the biggest weekly gain since the early stages of Russia's war in Ukraine. The region has little alternative to Russia's pipelines, especially for the critical winter months. There's little spare capacity from Norway and the Netherlands, and liquefied natural gas cargoes are expected to become tighter.

China, the world's top importer of LNG in 2021, has cut back spot purchases this year after COVID-19 restrictions sapped demand. But usage is likely to bounce back this winter, pitting China against Europe for a dwindling amount of spare LNG. Repairs to a key Texas export terminal will further hamper supply.

On Friday, the European Commission recommended that Ukraine be granted candidate status, a day after German Chancellor Olaf Scholz, French President Emmanuel Macron and Italian Prime Minister Mario Draghi traveled to Kyiv and threw their weight behind the effort.

Even amid the show of support, gas was an issue. After meeting with Ukrainian President Volodymyr Zelenskyy, Draghi accused Russia of "lies" in blaming technical maintenance for lower Nord Stream deliveries. Italy may trigger an emergency gas plan as soon as next week if Russia continues to curb supplies, a move that may involve a bigger reliance on dirtier fuels.

Germany, which is at the first level of its own three-stage crisis plan, is considering a range of options to reduce demand such as allowing landlords to reduce heating in the winter and implementing an auction platform for companies to sell their consumption rights. Europe's largest economy, which is reliant on Russia for more than a third of its supplies, has called for solidarity and urged people to save energy to thwart Putin.

"Everything depends on the EU gas-sharing mechanism between countries, and regulatory decisions on how to share available gas within countries," Jonathan Stern, a distinguished research fellow at the Oxford Institute for Energy Studies. "An early cold, windless winter would create early problems."

In Germany, the network regulator, known as BNetzA, would implement rationing if the government declares a national gas emergency. The Bonn-based agency has said leisure venues would likely see reductions, while consumers and critical public services such as hospitals would be protected. Companies could face disruption.

"The current reductions of Russian gas deliveries can put all of us — consumers as well as industry — in a very serious situation," Klaus Mueller, BNetzA's chief, said on Twitter. "As long as we can, we must avoid this through gas savings and storage."

The squeeze will unnerve economic policy makers as they try to contain record inflation. An additional increase in energy costs risks undermining efforts by the European Central Bank to rein in price increases by starting to raise interest rates next month.

Concern about economic growth is also picking up. Consumers are being squeezed by the rising cost of living, and the prospect of energy rationing and steeper gas bills could further dent confidence. For Germany's outsized manufacturing sector, the issue exacerbates input shortages that have put it on the back foot.

In an effort to respond, Group of Seven officials are laying the groundwork for leaders to potentially discuss the introduction of a price cap on energy imports from Russia, according to people familiar with the matter.

Lead negotiators for G-7 member states have been exploring the mechanism as part of preparations for a summit in the Bavarian alps later this month, said the people, who asked not to be identified talking about private conversations.

While Europe has moved to ban imports of Russian coal and oil, gas has been more difficult to replace because of supply relationships that have been built up over decades.

"Even considering counter measures, it might be inevitable that some rationing of demand will need to take place," said Massimo Di Odoardo, vice president for gas research at Wood Mackenzie.