‘We’re here to dig in our spurs’: With scant options in Ukraine, US and allies prepare for long war 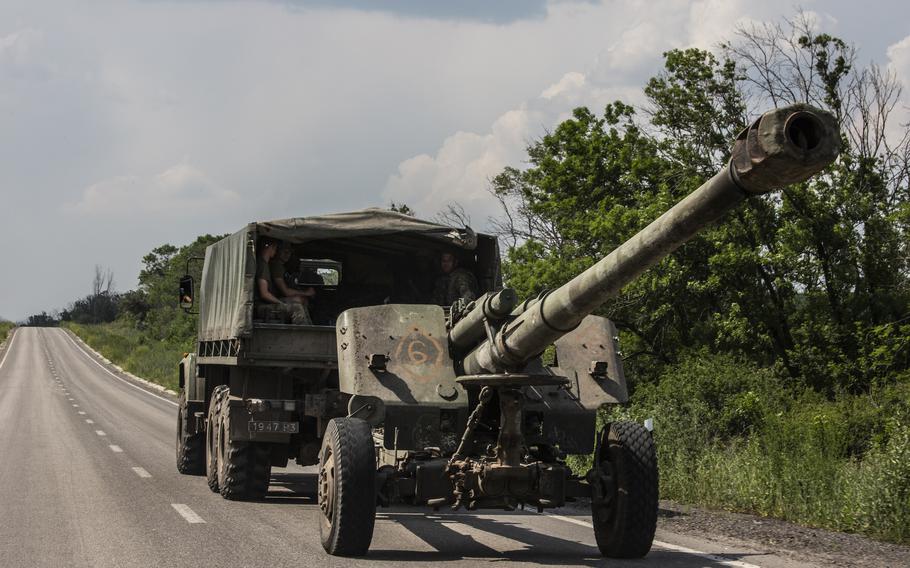 Ukrainian forces transport a 152 mm howitzer along a main road in the Donbas region of eastern Ukraine on June 12, 2022. (Heidi Levine/For The Washington Post)

The United States and its allies are making preparations for a prolonged conflict in Ukraine, officials said, as the Biden administration attempts to deny Russia victory by surging military aid to Kyiv while scrambling to ease the war’s destabilizing effects on world hunger and the global economy.

President Joe Biden’s announcement this week of an additional $1 billion in security aid for Ukraine, the single largest tranche of U.S. assistance to date, offered the latest proof of Washington’s determination to ensure Ukraine can survive a punishing battle for the eastern Donbas region. European nations including Germany and Slovakia unveiled their own shipments of advanced weapons, including helicopters and multiple-launch rocket systems.

“We’re here to dig in our spurs,” Defense Secretary Lloyd Austin said after convening dozens of nations in Brussels to pledge greater support for Kyiv.

The decision to supply Ukraine with increasingly sophisticated arms such as anti-ship missiles and long-range mobile artillery — capable of destroying significant military assets or striking deep into Russia — reflects a growing willingness in Western capitals to risk unintended escalation with Russia.

The support appears to have emboldened the government of President Volodymyr Zelensky, who this week vowed to retake all of Russian-controlled Ukraine, even areas annexed by Moscow long before Russian President Vladimir Putin’s Feb. 24 invasion.

But analysts say that despite the surge in outside aid, and strong morale among Ukrainian troops, Kyiv and its backers can hope for little more than a stalemate with Russia’s far bigger, better armed military. Unlike in Moscow’s failed attempt to seize the capital Kyiv, the Donbas battle has played to Russia’s military strengths, allowing it to use standoff artillery strikes to pound Ukrainian positions and gradually expand its reach.

Ivo Daalder, a former U.S. ambassador to NATO who now heads the Chicago Council on Global Affairs, said the battlefield impasse leaves the United States with a stark choice: either continue to help Ukraine sustain a potentially bloody status quo, with the devastating global consequences that entails; or halt support and permit Moscow to prevail.

“That would mean feeding Ukraine to the wolves,” Daalder said, referring to a withdrawal of support. “And no one is prepared to do that.”

A senior State Department official, who spoke on the condition of anonymity to describe ongoing international deliberations, said Biden administration officials had discussed the possibility of a protracted conflict with global spillover effects even before February, as U.S. intelligence suggested Putin was preparing to invade.

The Biden administration hopes that the new weaponry, in addition to successive waves of sanctions and Russia’s diplomatic isolation, will make a difference in an eventual negotiated conclusion to the war, potentially diminishing Putin’s willingness to keep up the fight, the official said.

Even if that reality does not materialize immediately, officials have described the stakes of ensuring Russia cannot swallow up Ukraine — an outcome officials believe could embolden Putin to invade other neighbors or even strike out at NATO members — as so high that the administration is willing to countenance even a global recession and mounting hunger.

Already the war, compounding the effects of the coronavirus pandemic, has plunged the world economy, now expected to suffer years of low growth, into renewed crisis. It has also deepened a global food emergency as the fighting pushes up prices of basic goods and cripples Ukraine’s grain exports — which typically feed hundreds of millions of people a year — pushing some 44 million people closer to starvation, according to the World Food Program.

“While it’s certainly challenging — we’re not certainly sugarcoating that — in terms of how to navigate these stormy waters, our guiding light is that the outcome of Russia being able to achieve its maximalist demands is really bad for the United States, really bad for our partners and allies, and really bad for the global community,” the State Department official said.

On Friday, Ukrainian forces attempted to defend dwindling areas under their control in Severodonetsk, a strategic city in Luhansk province that Pentagon officials expect to fall soon.

In a sign of how Western weaponry has the potential to pull the West deeper into the war, a U.S. defense official on Friday confirmed that a U.S.-made Harpoon anti-ship missile had struck a Russian tugboat in the Black Sea. For the first time as part of Biden’s latest arms package, the United States said it will provide Ukraine mobile Harpoon launchers.

Ukrainian leaders’ longtime ambition to integrate more further into Europe moved closer to reality on Friday, when the European Commission recommended that Ukraine be made an official candidate for European Union membership. Zelensky hailed what he called a “historic decision,” even though membership might be years away.

“Ukrainians are ready to die for the European perspective,” European Commission president Ursula von der Leyen said. “We want them to live with us the European dream.”

Putin, lashing out at the West in a speech on Friday, said he had nothing against the idea of Ukraine joining the E.U. but also warned that “all the tasks of the special operation will be met,” as the Kremlin calls the invasion, and said his country could employ nuclear weapons if its sovereignty was threatened.

Underscoring what Western nations say is a radically altered security outlook, NATO leaders are expected to unveil new deployments to Eastern Europe at a late June summit in Madrid.

Ahead of that meeting, Gen. Mark. A. Milley, chairman of the Joint Chiefs of Staff, has defended the need to stop Russia in stark claims, equating the suffering among civilians in Ukraine to what Nazi Germany inflicted on Europe. But he has also cautioned that while Moscow faces chronic issues in its Ukraine offensive, including leadership, morale and logistics, the numbers “clearly favor the Russians” in eastern Ukraine.

The prospect of a negotiated conclusion seems distant with Putin appearing undeterred, likely pursuing what analysts describe as a strategy of seizing the entire Donbas region then offering a cease-fire that would freeze in place Russia’s control of that and other areas.

“My concern is that basically Russia on one hand and the Ukrainians and their partners on the other are pursuing mutually incompatible goals,” said Samuel Charap, a Russia expert at the RAND Corporation. “That leads the Russians to keep pushing harder and harder and us to give more and more.”

Many experts believe the war is likely to settle into a lower intensity conflict or a situation like that on the Korean Peninsula, where north-south fighting was halted in a 1953 armistice without a formal end to the war. A heavily militarized boundary developed between the two Koreas, with occasional flare-ups, and is a scenario some analysts predict could occur between Ukraine and the parts of its territory controlled by Moscow.

“I don’t think either Putin or Zelensky can continue at the current level of combat for years,” James Stavridis, a retired Navy admiral and former supreme allied commander of NATO, said in an email. “Certainly for some months, but unlikely years.”

As the conflict grinds on, it is prompting conversations about what trade-offs the United States may need to make in its larger foreign policy goals or its massive military budget. The Senate Armed Services Committee, citing inflation and the war in Ukraine, on Thursday added $45 billion to the defense budget, bringing the likely bill to $847 billion for the next fiscal year.

Stacie Pettyjohn, the director of the defense program at the Center for a New American Security in Washington, said the war also continues to eat up the bandwidth of senior U.S. officials that could be spent on long-term planning and modernization. In the past officials have cited crises like the multiyear war against the Islamic State as factors that delayed a planned shift to focus on China.

“They keep having to deal with Ukraine because the situation is evolving and it is immediate, and we need to provide the assistance that we can and figure out how to support the Ukrainians,” she said. “But that means that they don’t have the time and attention to sort of press ahead on those other issues that are really important, and those long-term changes that would be necessary if the U.S. is really going to pivot its attention and focus to the Pacific.”

The Biden administration has vowed it will not pressure Kyiv to accept concessions to cement a resolution to the war. Officials point out that Zelensky, even if he were inclined to yield large parts of Ukraine’s territory, could face a revolt from Ukrainians if he accepted Moscow’s terms.

“Our job is not to define those terms,” Biden’s national security adviser, Jake Sullivan, said at a think tank event on Thursday. “Our job is to give them the tools they need to put themselves in the strongest position possible.”