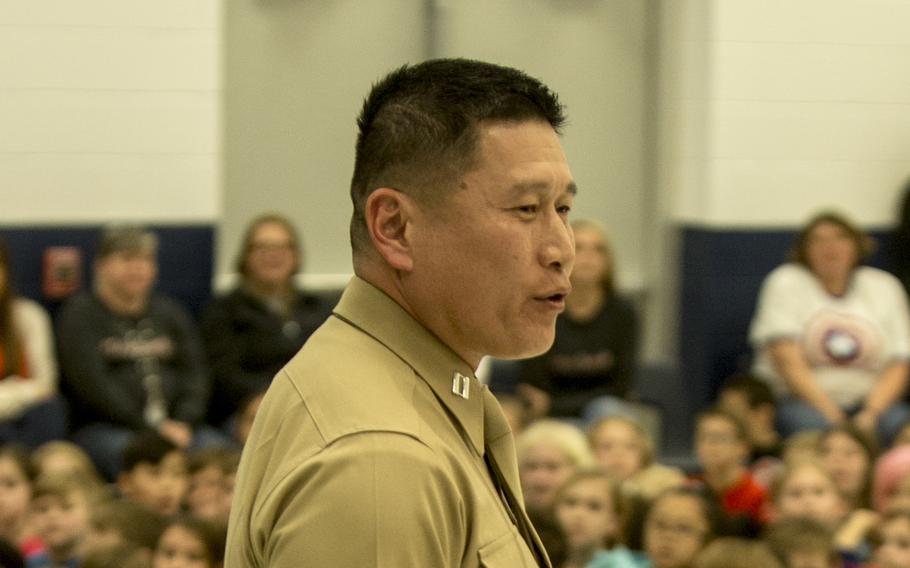 Grady Kurpas, shown during his time as a Marine, speaks to students during an assembly in Swansboro, N.C., Jan. 25, 2019. (Aaron Douds/U.S. Marine Corps)

Former Marine Corps officer Grady Kurpasi is the third American to go missing in Ukraine, his wife, Heeson Kim, told The Washington Post on Thursday evening. Two other American veterans who have recently lost contact with family are also feared to have been captured by Russian forces.

Kurpasi, who volunteered to join Ukraine's fight against Russia's invasion, left the United States in early March and arrived in Kyiv on March 21, said George Heath, a representative for his family. The 49-year-old was last heard from on April 26, when he was tasked with holding an observation post in the Kherson region so civilians there could evacuate, Heath added. The veteran last spoke to family and friends in the United States a few days before the assignment.

The State Department said earlier Thursday that a third American had gone missing several weeks ago but did not name him. CNN first confirmed Kurpasi's identity.

Heath said that Kurpasi's cellphone signal was recently traced to the vicinity of a large shopping mall in the Kherson and Mykolaiv regions. He did not provide more detail. The Washington Post could not independently verify that claim.

Kurpasi lived in New York City during the Sept. 11, 2001, terrorist attacks and joined the Marines shortly after, Heath said. He called Kurpasi, who was his platoon commander between 2012 and 2014, a "great man" who has always "led from the front and led by example."

During his 20 years of military service, Kurpasi took part in three combat tours in Iraq and was awarded a Purple Heart, according to his service record provided to The Post. The linguistics graduate from the University of California at Los Angeles received a scholarship from the Pat Tillman Foundation, which provides education grants to promising leaders with a military background, in 2009.

While many foreigners volunteered to fight Russia alongside the Ukrainian military, Heath said Kurpasi had originally intended to help civilians. He "fell into" a combat role, Heath said. "He did end up . . . serving and getting some fights. But that wasn't his priority."

A 22-year-old Marine Corps veteran, Willy Joseph Cancel, is believed to be the first American fighter killed in the war. Earlier this month, Alexander Drueke, 39, and Andy Tai Huynh, 27, went missing near the northeastern border city of Kharkiv. An unverified photo of the two men circulated on social media Thursday. Their families said that they did not have confirmation of the image's authenticity, but they were in close contact with the State Department.