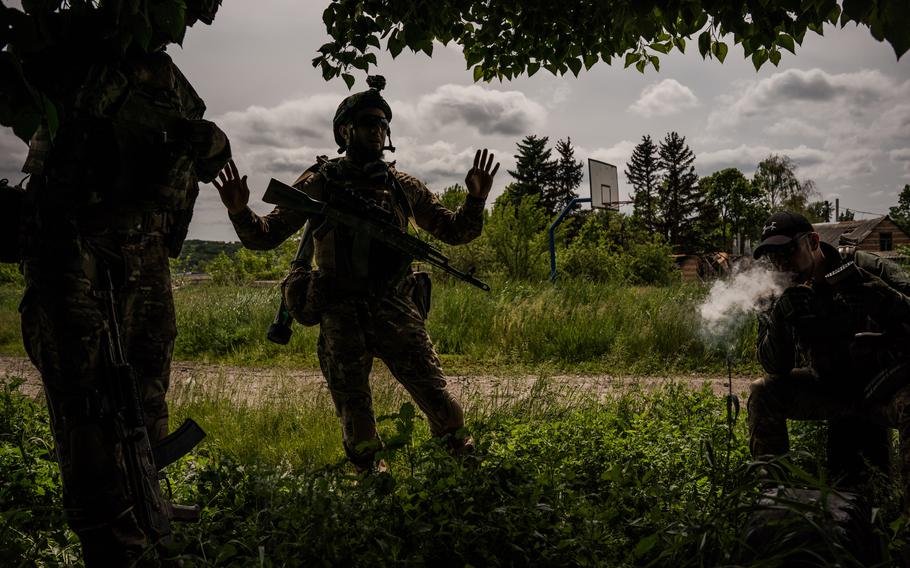 Two U.S. military veterans have gone missing in Ukraine, and it is feared they have been captured by Russian forces, family members of the missing Americans said Wednesday.

Alexander Drueke, 39, and Andy Tai Huynh, 27, both of Alabama, went missing in the past few days near Kharkiv, a Ukrainian city not far from the Russian border, according to their families. Drueke had served in the U.S. Army and Huynh is a Marine Corps veteran, they said.

In phone interviews, both families shared similar accounts of the two men contacting them June 8 to say they would be unreachable during a multi-day mission. Neither has been heard from since, they said.

Drueke’s mother, Lois, said she received a phone call Monday from another U.S. citizen who indicated he was in Ukraine with her son. The caller, whom she did not identify, told her that intercepted communications suggested Russian forces had detained two Americans, she said.

The Russian Embassy in Washington did not immediately respond to a request for comment.

Drueke had told family that he was teaching Ukrainian troops how to use American-made weapons, his mother said.

“Alex felt very strongly that he had been trained in ways that he could help the Ukrainians be strong and push Putin back,” she added, referring to the Russian president, Vladimir Putin. “He went over there not to fight but to train.”

Joy Black, who identified herself as Huynh’s fiancee, said he had volunteered to fight alongside Ukrainian forces. She said she received a phone call Monday also from someone seeming to be American who told her that Huynh was missing.

“The response that we’ve gotten from our government has been very helpful,” Black said. “They have been taking it very seriously. We got the call on Monday morning, and this has just gone up so high, so quickly.”

News of the Americans’ disappearance was first reported Wednesday by the Telegraph of London. The State Department said that the Biden administration, which has discouraged Americans from joining the war effort, was “aware of unconfirmed reports of two U.S. citizens captured in Ukraine” but declined to comment further.

“We are closely monitoring the situation and are in contact with Ukrainian authorities,” the statement said. “... We also once again reiterate U.S. citizens should not travel to Ukraine due to the active armed conflict and the singling out of U.S. citizens in Ukraine by Russian government security official.”

Speaking to the media Wednesday afternoon, White House spokesman John Kirby said he had no information to share about the missing Americans or whether the U.S. government believes they have been taken captive.

It’s unclear how many Americans have joined the war. Soon after the conflict began in late February, Ukrainian officials said that about 4,000 had expressed interest in doing so.

At least one American citizen, Marine Corps veteran Willy Joseph Cancel, 22, has been killed in action.

Drueke served two tours in Iraq with the Army, leaving around 2010 as a staff sergeant, his mother said. He had struggled with post-traumatic stress since leaving the military but seemed to find purpose in the mission in Ukraine, she added.

Huynh served in the Marine Corps for a few years, including on the Japanese island of Okinawa, his fiancee said.

The Washington Post could not immediately verify either man’s military service histories.

Lois Drueke said she last spoke with her son by phone on June 5 and then received a message three days later on the encrypted communications platform Signal. His message said that he would be “going dark” and unreachable for a few days and that he would be in contact again after completing an assignment.

The Washington Post’s Alice Crites and Missy Ryan contributed to this report.