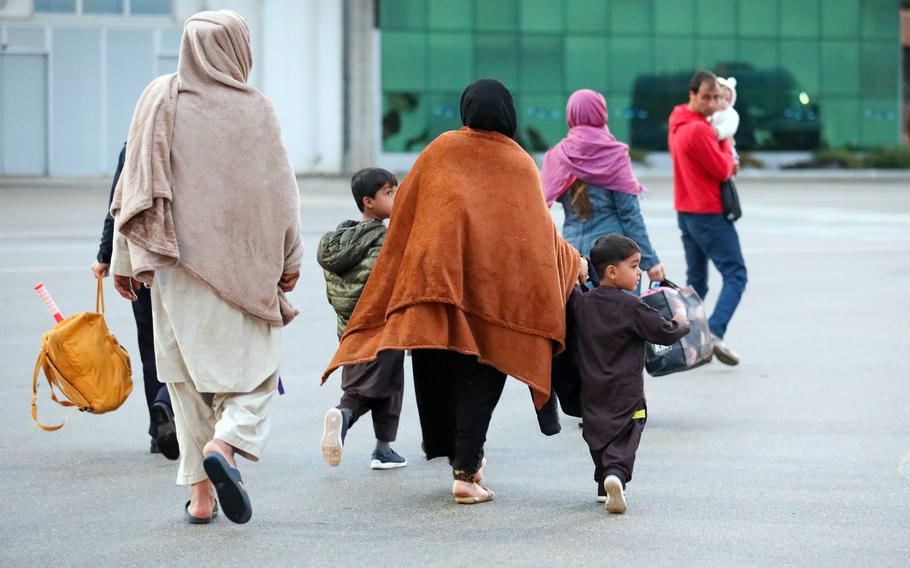 Afghans evacuated by the U.S. arrive at Pristina International Airport in Kosovo in October 2021. A total of 16 Afghan evacuees at Camp Bondsteel were turned down in their bid for admission to the U.S., government officials and media reports said. (Gloria Kamencik/U.S. Army)

A group of 16 Afghan evacuees living at an American military base in Kosovo since the fall of their country to the Taliban last year have been deemed ineligible to enter the U.S., according to media reports and government officials.

The State Department is seeking other countries willing to take in the denied Afghans now at Camp Bondsteel, two federal agency officials told Stars and Stripes on Wednesday.

“No one is going to be forcibly deported to Afghanistan,” said one senior administration official who is aware of the situation and requested anonymity because he was not authorized to comment on the record.

The decision not to let the refugees enter the United States was initially reported recently by Axios and The Wall Street Journal.

Afghan refugees are allowed to stay at the base for up to one year, according to the agreement between the U.S. and Kosovo, said a State Department official, who was also unauthorized to speak on the record.

Many of those left at Camp Bondsteel are family members of someone going through additional security vetting, with the hopes of settling in the U.S.

About 70 refugees remain at the camp, down from the roughly 200 in December. Many relocated to the United States, while some left after applying for asylum in other countries.

Officials speaking to Stars and Stripes did not say what countries might take in evacuees denied by the U.S., although one of them said an Afghan had recently left the base to seek entry into a Persian Gulf country.

Evacuees can also go back to Afghanistan if they wish, according to Axios.

Although the officials did not specify why the 16 refugees were denied, a senior administration official told Stars and Stripes in December 2021 that some of those at Camp Bondsteel had been flagged during vetting for security concerns.

During the evacuation of some 74,000 people from Afghanistan last summer, U.S. lawmakers expressed fears that evacuees could pose security threats or have connections to violent groups such as the Taliban or the Islamic State.

That only a small number of those applicants have been denied entry to the U.S. is “an example of the system working exactly as it should,” the State Department official said to Stars and Stripes.

But family members of evacuees who are still at the base told Stars and Stripes this week that their loved ones fear that they too will be denied entry into the U.S.

Some of the 16 who were rejected told The Wall Street Journal that their families had no ties to militant groups and were just victims of poor translation.

They were also concerned about conditions at the base, which some described as makeshift shelters that were freezing over the winter, according to the report.

The State Department official said the government was striving to build suitable accommodations and opened a new medical facility at the base.

Examinations into conditions at other U.S. bases that housed evacuees revealed a lack of appropriate staffing, limitations on funding and difficulties deciding what law enforcement should do when people were suspected of crimes, a Pentagon inspector general’s report published May 13 said.

In addition to the evacuees still in Kosovo, some 2,800 Afghans remained at bases in the United Arab Emirates and Qatar at the end of March, the report said.