Ukraine is rebuilding cities as fast as Russia destroyed them Petro Trotsenko, 74, seen on May 5, spent the entire Russian occupation in the basement of his house. His market stall in Bucha was looted by Russians in the first days of the war. (Serhiy Morgunov/for The Washington Post)

BUCHA, Ukraine — The mere sight of a child here — wearing sunglasses, pulling a scooter, bugging his mother to buy him candy — was enough to impress Petro Trotsenko, a stall owner at a market in Bucha that reopened this past week.

Just over a month ago, the market lay bare, looted of all its wares, cut up by shrapnel. The nearby glass factory where Trotsenko, 74, worked in his younger years was being used as a torture chamber by Russian soldiers occupying this suburb of Kyiv. The bodies of 22 people from his neighborhood, summarily executed over the course of March, lay where they had fallen in the streets. Nearly every yard was filled with rubble, burned-out vehicles and makeshift graves. Nearly every family with children had fled.

Trotsenko and his wife, who hid for weeks in their basement, burned wood from the fence that surrounded their house to boil rainwater. That’s how they cooked the gruel that kept them alive.

But in about the same amount of time as the Russians occupied Bucha, the city has remade itself. The market is open, and Trotsenko has restocked. Huge divots in roads where the shells fell have been paved over. The suburban train to Kyiv is running again. Water and electricity have been largely restored. Families are returning. 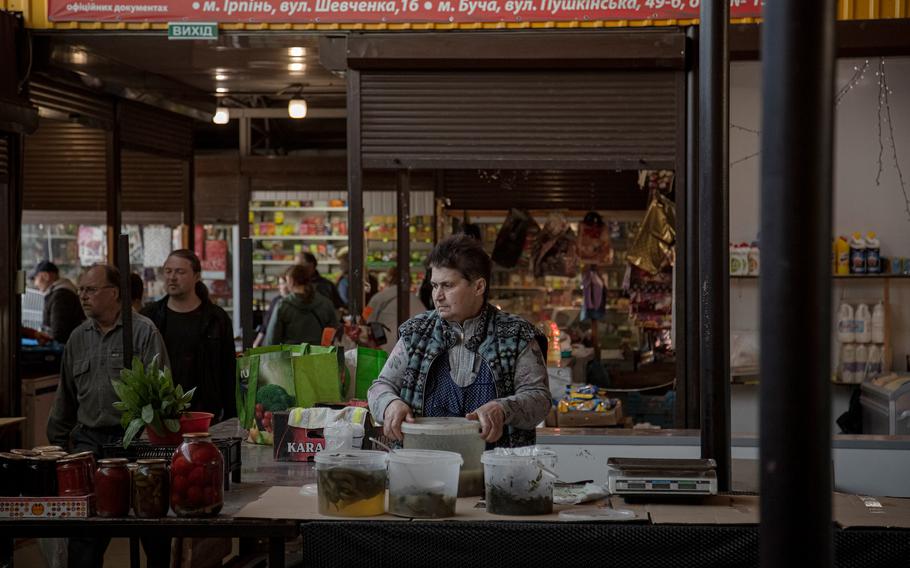 The market in Bucha is starting to come back to life. (Serhiy Morgunov/for The Washington Post) 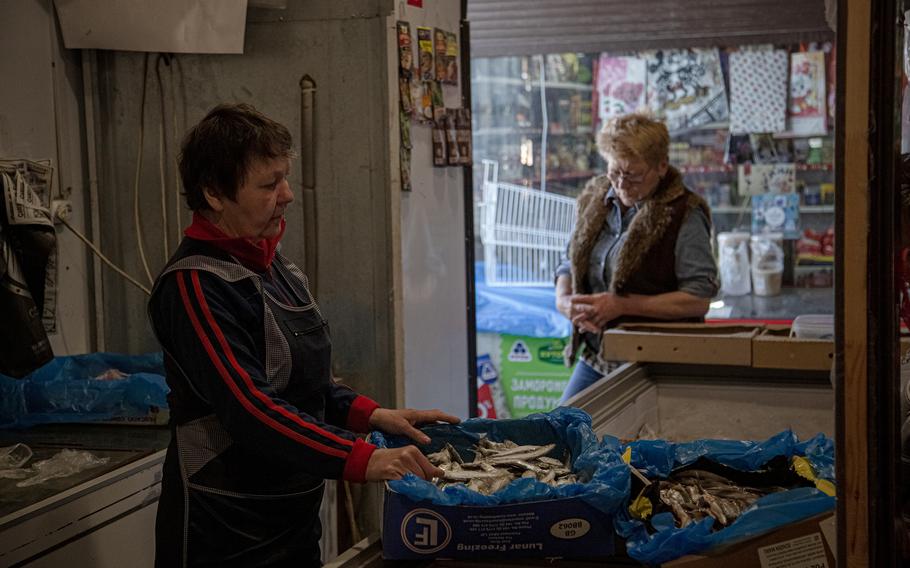 Frozen fish for sale in the Bucha market on May 5. Fish had not been available here for two months. (Serhiy Morgunov/for The Washington Post)

President Volodymyr Zelensky says it will cost Ukraine at least $600 billion to rebuild what has been destroyed in Bucha and across the country during the Russian invasion. But local officials and regular citizens are not waiting for some new Marshall Plan. They are cleaning up and rebuilding their cities, even as the question of when the war will end remains unanswerable.

The rebuilding effort is imbued with a sense of optimism that Ukraine will outlast Russia’s assault. Volunteers are mostly carrying it out, allowing government funds to remain focused on the war.

In places where scars are still fresh, such as Bucha, or still being inflicted, like Kharkiv and other cities in eastern Ukraine, the driving force behind rebuilding is Ukrainians’ determination to prove to Russia — and to themselves — that Ukraine is anything but defeated.

In Kharkiv, Stas Bocharnikov, a manager at a distribution company, felt so restless to get back to normal that he could only bear one week in a bomb shelter at the beginning of the war. Since then, he has spent nearly every day wrangling volunteers to clear the debris from strike sites — work that allows for more-specialized crews to get on with the task of either demolishing or rebuilding damaged structures. 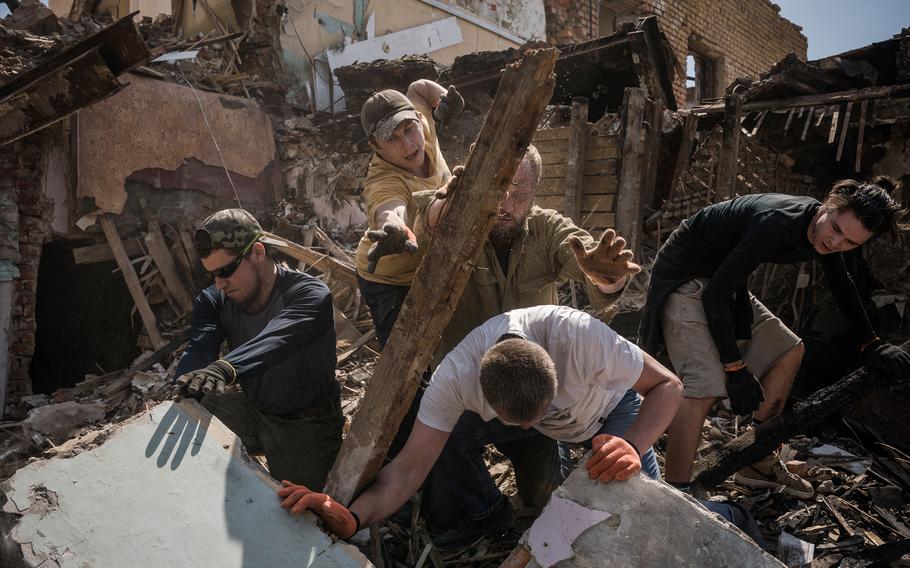 Volunteers on May 3 clear an area of Kharkiv, Ukraine, that was destroyed in a strike. (Wojciech Grzedzinski/for The Washington Post) 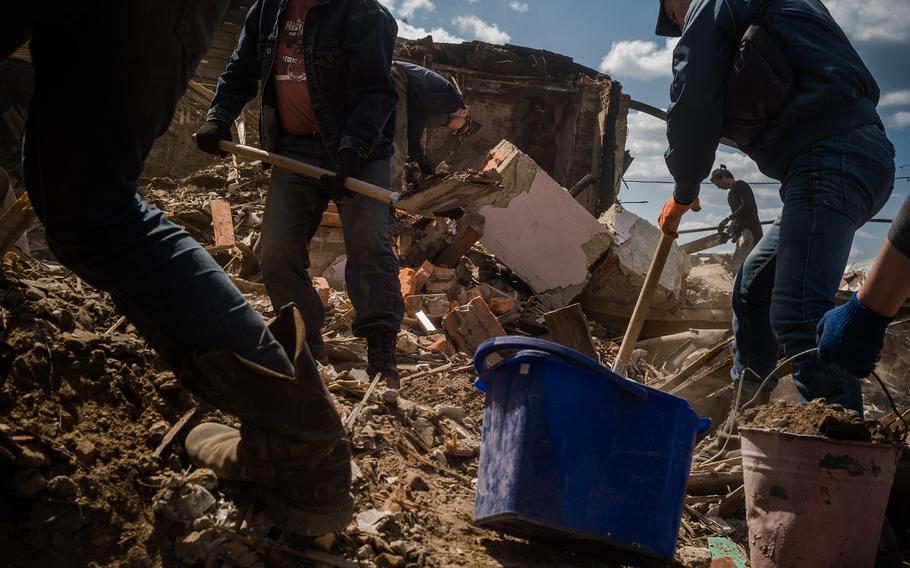 Volunteers working on clearing rubble from a damaged section of Kharkiv. (Wojciech Grzedzinski/for The Washington Post)

Kharkiv, Ukraine’s second-most-populous city, is just 25 miles from the Russian border. For more than 70 days it has been battered by artillery and air bombardment, and most buildings in the city have at least lost their windows to blast. But Bocharnikov now has enough volunteers that he fills buses with them, dispatching them every day to different parts of the city.

Once Bocharnikov gets the word from the local emergency services unit that an area has been cleared of cluster munitions, the teams get to work, sometimes with the booms of artillery in the background.

The risk is worth it for one simple reason, he said: “I don’t want to live in crap.”

At a damaged culinary school on a recent day, the volunteers ranged from women in their 60s to a 12-year-old boy. They tossed scattered bricks into waste piles but carefully saved cookbooks and utensils that had somehow survived the explosion.

People aren’t paid, Bocharnikov said; the most he’s ever given them was some cigarettes or a free meal prepared by other volunteers in the city.

“When people will one day talk about how we rebuilt Kharkiv, I want to tell my kids or grandkids that I helped,” said 19-year-old Darina Potapenko. 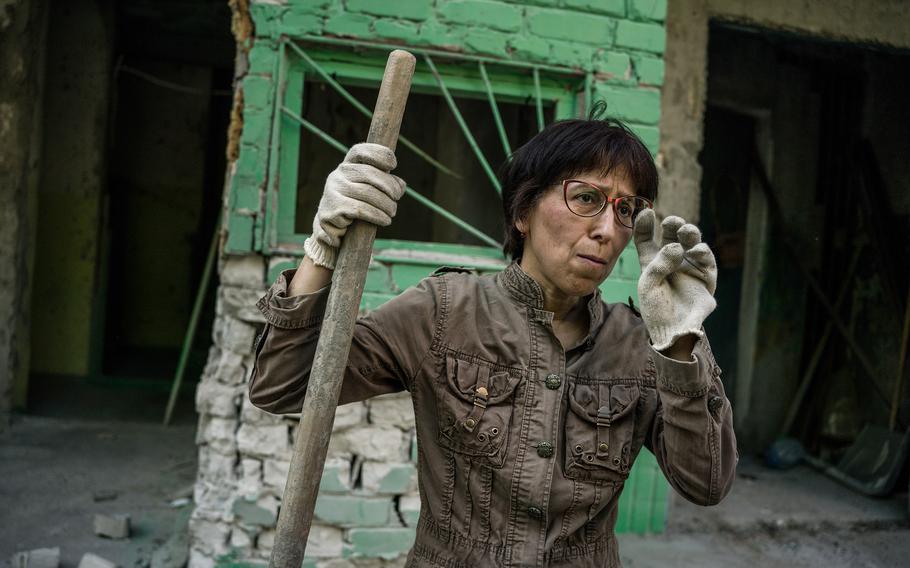 Marina Smelianskaia, seen on May 4, 2022, is a volunteer who has helped clean up areas destroyed in Russian strikes in Kharkiv. (Wojciech Grzedzinski/for The Washington Post)

The next day, the same group of volunteers worked in a different part of town — a residential area where a flurry of mortars had crashed through front doors and ceilings. With orange gloves on, Marina Smelianskaia, 53, a former lab worker, dug her shovel into a pile of rubble to clear it from the building’s front stoop.

On the bus ride to the neighborhood, Smelianskaia was demoralized by how many buildings were still damaged in the area — and how she was barely making a dent when Russian rockets were wrecking homes anew every evening. She kept shoveling.

“People worked here about two weeks ago — they already cleaned this area — and it was hit again,” she said. “Now we’re cleaning it again. So this feeling of accomplishment isn’t there yet for me.”

Continued shelling in Kharkiv has done little to deter the volunteers. Tulips have been planted throughout downtown, and city workers were cutting the grass in hard-hit neighborhoods. 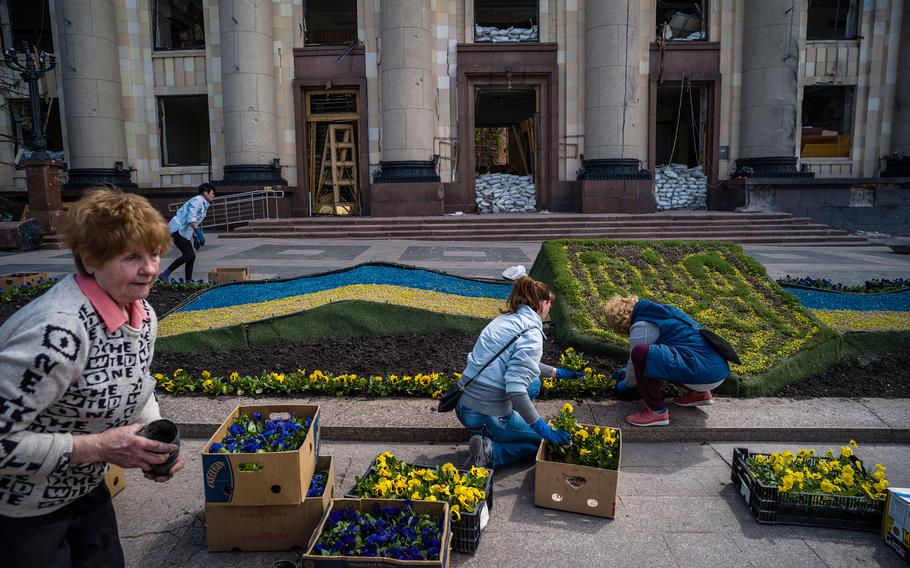 Valentina Orlova, 73, and other volunteers plant pansies in front of a damaged administration building in Kharkiv on May 4. (Wojciech Grzedzinski/for The Washington Post)

In front of the city’s destroyed regional administration building, Valentina Orlova, 73, hurriedly planted yellow pansies early this past week. It was around noon, and the work needed to be done by 2 p.m.

“That’s when the shelling usually starts, so we need to finish quickly to get home,” she said.

If an ongoing Ukrainian counteroffensive succeeds in Kharkiv, fighting may let up in coming weeks, giving the volunteers more time to rebuild in more meaningful ways. If that happens, the efforts made by residents of Kyiv’s suburbs, including Bucha, Irpin and Hostomel — all of which were extensively demolished — may serve as a template.

In Irpin, a suburb that was formerly home to about 60,000 people, municipal workers have worked on half-pay to repair dozens of water and sewage pumps.

“We worked day and night without a day off,” said Artur Zahodirenko, the director of Irpin’s municipal water service, which relied on equipment supplied by aid agencies.

About 16,000 people have returned to Irpin in recent days, said the mayor, Oleksandr Markushin. If the progress in restoring services continues apace, he said, he’ll formally invite all residents back on May 15. Tatiana Andrienko sweeps glass from the sidewalk in front of her apartment building on May 3, 2022, after a Russian rocket hit a nearby area of Kharkiv. (Wojciech Grzedzinski/for The Washington Post)

This past week, a bank reopened, as did numerous kindergartens. The completely destroyed road bridge between Irpin and Kyiv, infamous as a place where many were killed by snipers while trying to flee during the occupation, is now passable by car.

The renewal has coincided with the arrival of spring in northern Ukraine, and Kyiv’s suburbs are covered in a blanket of dandelions and fresh grass. Brightly colored laundry sways in the gentle, warm breeze. Two boys carrying skateboards crossed paths with a female friend, her hair newly dyed pink, in one of Irpin’s many parks.

Markushin, who never left Irpin during the occupation, recently put out an open call for architects, designers and engineers willing to lend their services for free to help rebuild the city. He expected about a dozen responses, but instead was overwhelmed.

“We thought only a few people will come, but 121 specialists came today. Just imagine! 121! We were shocked,” he said. “Today we toured several locations and in a few weeks they will provide their first plans.”

Sergii Mukaieliants and Maria Avdeeva in Kharkiv, and Serhiy Morgunov in Bucha and Irpin contributed to this report.