As war grinds on, the definition of victory remains murky 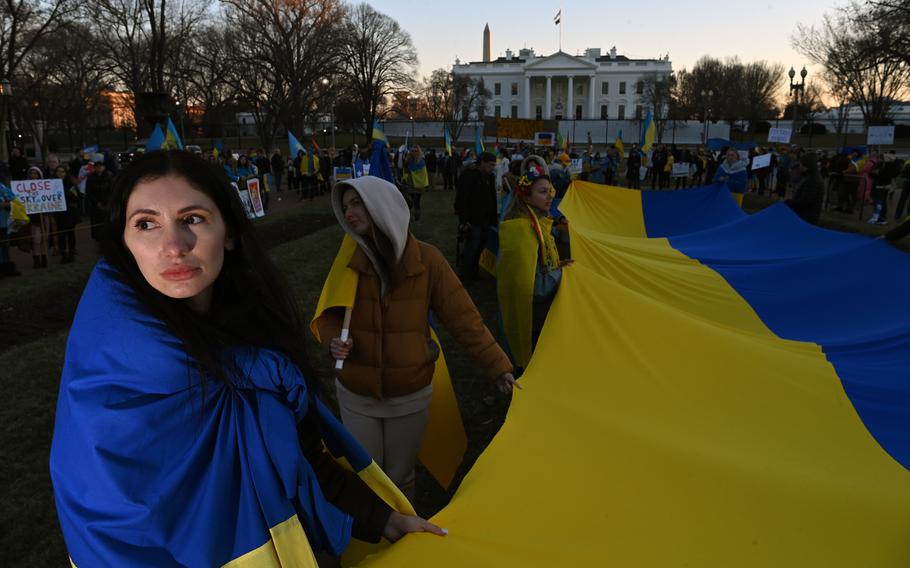 Iryna Tomaieva, left, gathers with others to show their support for Ukraine near the White House on Feb. 27, 2022. (Matt McClain/The Washington Post)

WASHINGTON — As the war in Ukraine grinds through its third month, the Biden administration has tried to maintain a set of public objectives that adapt to changes on the battlefield and stress NATO unity, while making it clear that Russia will lose, even as Ukraine decides what constitutes winning.

But the contours of a Russian loss remain as murky as a Ukrainian victory. And as the conflict heads into what is likely to be a protracted fight, the need to manage allied cooperation unity and public opinion here and abroad —- balancing the probable with the possible — has become as much a priority as what is happening on the battlefield.

Defense Secretary Lloyd Austin, who said late last month that Ukraine “can win” the war against Russia, and the Biden administration would do “everything we can” to support that goal, sounded less bullish in congressional testimony this week.

“We hope that, at the end of this, that Ukraine will be a ... sovereign state with a functioning government that can protect its territory,” Austin told the Senate Appropriations Committee. Austin and other senior officials, however, have declined to specify their idea of what that government will look like, and what territory it will include.

Whatever outcome it would eventually like to see, the administration has quickly walked back statements that went beyond the bounds of an end to the war with a sovereign Ukraine still in existence. When President Joe Biden said in late March that Russian President Vladimir Putin “cannot remain in power,” he and the White House rushed to explain it as a presidential expression of “moral outrage” rather than a policy of regime change in Moscow.

When Austin drew attention last month by saying the United States sought a “weakened” Russia, administration officials quickly added that the goal was specific to military conflict, and was to ensure Putin would think twice about invading another country.

Ukrainians themselves have been clear about their definition of winning. Their goal, President Volodymyr Zelenskyy has said repeatedly, is restoration of full territorial integrity, pushing the Russians back from recently claimed territory in the south and east, as well as ultimately from Crimea, annexed by Moscow in 2014, and parts of the eastern Donbas region that was grabbed by Russia-backed Ukrainian separatists at the same time.

Serious negotiations with Russia would only begin when Moscow pulls its troops back, or they are pushed from territory occupied since the invasion began Feb. 24. He also listed the return of refugees, Ukraine’s admission to the European Union, and the prosecution of Russian military leaders for war crimes as elements of any postwar landscape.

“I think we shouldn’t underestimate the view of the Ukrainian people, which is never to accept anything” a European diplomat said. Even if direct Russia-Ukraine negotiations, now in abeyance, resume, “there is no way politically Zelenskyy can settle with the Russians” unless it includes the broad elements the Ukrainian president has articulated. The diplomat was one of several U.S. and foreign officials who spoke on the condition of anonymity to discuss internal calculations.

Within NATO, some have outlined more definitive goals than others. In a rousing video speech on Tuesday to the Ukrainian parliament, British Prime Minister Boris Johnson moved beyond Austin’s possibility of victory, assuring that “Ukraine will win.” British Foreign Secretary Liz Truss has been even more specific. Britain was “doubling down” on its aid to Ukraine, she said last week at the Mansion House, an annual London venue for delivery of a major foreign policy address. Calling Russian forces a “cancerous growth,” she said “we will keep going further and faster to push Russia out of the whole of Ukraine,” including Crimea and Donbas.

Ukraine’s combat success so far has surprised and heartened the administration. Before the war began, the administration released an unprecedented amount of classified information indicating that amassed Russian forces would invade. But it did not reveal the expectation of the U.S. intelligence community that Ukraine would fall in short order — with Kyiv succumbing within three to four days — according to a person familiar with the matter.

NATO unity and a rapid response, with U.S. and allies rushing troops to NATO’s eastern border and weapons to Ukraine, were gratifying, even more so when Ukrainian forces not only held Kyiv but drove the Russians out of the north.

The current phase of the fight is likely to be much harder and more protracted. Russia, in apparent retreat from its initial objective of taking most, if not all, of Ukrainian territory, has massed its forces in the eastern part of the country along a line parallel to its own border. There, its existing control of significant territory will likely temper the logistical problems it suffered around Kyiv. In the southeast, Russian forces are crushing remaining opposition along swaths of the Black Sea coast.

Miles to the west of the Russian lines, tens of thousands of Ukrainian troops — up to half of its 126,000 prewar army — face them. The U.S. military assesses that Russia’s tactical objective is to send more of its own forces in behind the Ukrainians from the south and from the northeast border area and encircle them. Across the flat, farming territory, a massive ground battle of attrition is expected to ensue, fought with long-range artillery and airstrikes, and armored vehicles.

In response, the United States and its allies are rushing heavy artillery, air defense and surveillance equipment, armed drones, and armored vehicles to the Ukrainians. Biden has asked Congress for an emergency $33 billion in weaponry and other support, in addition to the massive amounts already sent.

“Russia’s changing objectives would certainly indicate that all this effort is having a strong effect,” a senior administration official said. “But as we have laid out many times, this conflict will likely be long and hard, and the next few months are critical, so Congress needs to move quickly.”

U.S. and allied staying power will be crucial. One of the sustaining challenges, beyond the focus on the “now” of what Ukraine needs, is maintaining public unity and support among and inside the countries backing Ukraine, another U.S. official said. 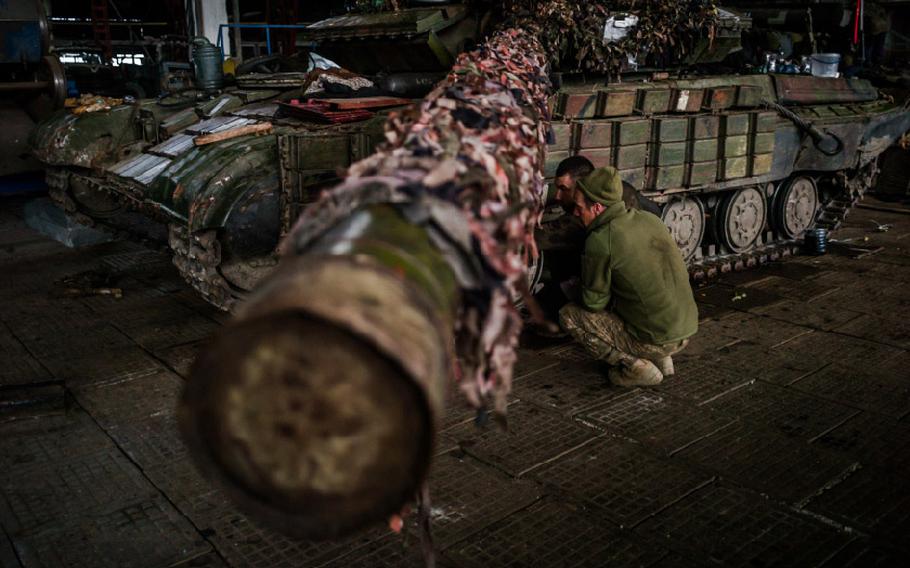 “Public support is a key variable in the outcome on the battlefield” and “we have to continue to make a compelling case,” this official said. “Failure or stalemate equal discouragement,” while success on the ground “equals unity.”

As the war continues, especially if it drags into next winter, some European governments may face shortages of heating fuel in addition to gas and consumer goods. For Biden, facing his own economic difficulties, the perception of Russia as having lost, or at least losing, could make a difference during midterm elections in November — as could the perception that his administration “lost” Ukraine.

Some are more optimistic about Ukraine’s chances for continued, or even early, progress in the current phase of the war. Retired Air Force Gen. Philip Breedlove, a former supreme allied commander of NATO, said it is too early to celebrate, but there are “good signs” that the Russians may not be able to accomplish everything they want in the east. Some “very smart people,” he said, believe that Russia will “culminate” its next operation within two to four weeks, effectively running out of military capability to press on.

That would open the door to a larger Ukrainian offensive to take back land that Russia has seized.

“Then we have the confirmation about what winning looks like,” Breedlove said. “Other people in the world are starting to set expectations that maybe winning is actually retaking all of Donbas and eventually expelling Russia from Crimea,” he said. “I don’t know if that’s realistic right now or not, but it’s certainly out there.”

The Pentagon is reluctant to publicly rate Ukraine’s chances of regaining all of its territory.

“We are careful in the way we talk about progress in the war, especially when it comes to Ukrainian capabilities and efforts,” a senior U.S. defense official said. “We have an obligation to speak to what we are providing them, but we never want to provide so much information that we violate their operational security or make it harder for them to conduct their operations. It’s a balance we strive to maintain every day.”

As to the administration’s definition of winning, “I think the ambiguity is not accidental,” the European diplomat said. “Sometimes if you’re very specific about your aims, it makes it easier to stop those aims. ... I always find myself wanting to defend the Americans on this, because if I were the Americans, I’d be more careful, too, because they’re the superpower, they’re the ones the Russians care most about.”

When asked Wednesday about whether the United States would be satisfied if Ukraine agreed to Russia remaining in Crimea and parts of the east, White House spokeswoman Jen Psaki repeated what has become an administration mantra: “The Ukrainians are going to define what a successful outcome looks like for them.”

Besides, Psaki said, Russia has already lost by not having achieved its initial goals of taking over much, if not all, of Ukraine or dividing NATO.

Another U.S. official put it a different way. “A lot of people have read too much into Austin’s comments” this official said, noting that the United States has from the start sought “a strategic defeat for Russia — meaning that Russia wouldn’t be able to project power like this again ... to threaten Ukraine or other neighbors again.”

At the end of the day, this official said, “accountability can come in many forms. It’s up to Ukraine to decide the contours of any peace agreement, but we also have tools that we put in place in terms of sanctions, export controls that can be removed or not, depending on how things look at the end of this.”