‘All art must go underground’: Ukraine scrambles to shield its cultural heritage 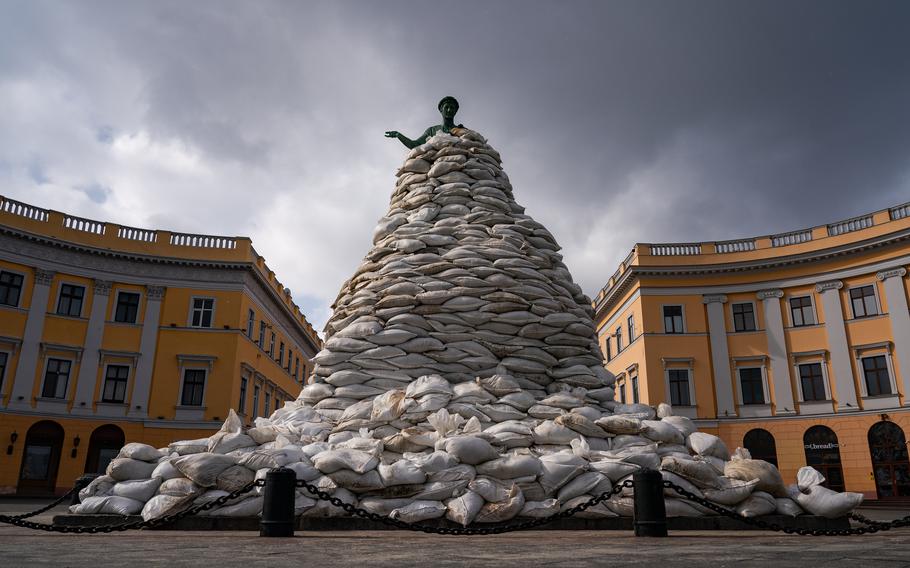 Volunteers put sandbags around the monument to the Duke of Richelieu for protection from a possible Russian attack on the city of Odessa, Ukraine, on March 10, 2022. (Salwan Georges/The Washington Post)

LVIV, Ukraine — Emptying a museum is a gargantuan task, and the entire workforce of the Andrey Sheptytsky National Museum in Lviv had been at it for a week before the final piece — a century-old portrait of the museum’s namesake — was taken down, leaving the last of its walls bare.

Ihor Kozhan, the director of the grand gallery opposite Lviv’s opera house, explained the rush.

“There is an egomaniac in Moscow who doesn’t care about killing children, let alone destroying art,” he said. “If our history and heritage are to survive, all art must go underground.”

Across Ukraine, artists, gallerists, curators and museum directors are desperately but carefully unhooking, wrapping and stashing away the country’s hefty cultural endowment as Vladimir Putin’s onslaught closes in. Statues, stained-glass windows and monuments are being covered with shrapnel-proof material. Basement bunkers are crammed with paintings.

As Russian bombardments have so far been heavier in the eastern half of the country, two of Ukraine’s richest cities in terms of cultural heritage, Lviv and Odessa, have had the benefit of extra time. Volunteers in the latter, for instance, took days to stack hundreds of sandbags around a monument to the Duke of Richelieu, a Frenchman who was one of the cosmopolitan port city’s founders. Just his head and his outstretched right arm remain uncovered.

Kyiv and Kharkiv, the country’s two biggest cities, were struck early in the war and have already suffered devastating losses. The walls are bare at the Andrey Sheptytsky National Museum in Lviv. (Kasia Strek/for The Washington Post)

The windows of Kharkiv’s main art museum have been blown out, subjecting the 25,000 artworks inside to freezing temperatures and snow for weeks. The city’s opera and ballet theaters were extensively shelled.

Twenty-five works by one of Ukraine’s most celebrated painters, Maria Prymachenko, famed for her colorful representation of Ukrainian folklore and rural life, were burned when Russians bombed the museum housing them in a town outside Kyiv. Other museums in the capital are boarded up, their works still inside because those who would have evacuated them have fled.

“City centers are seriously damaged, some of which have sites and monuments that date back to the 11th century,” Lazare Eloundou, the director of the United Nations’ world heritage program, told reporters last week. “It is a whole cultural life that risks disappearing.”

The deliberate destruction of a country’s or culture’s heritage is a considered a war crime, but UNESCO has not yet canceled its next summit, which is scheduled to take place in Russia.

As Russian troops attempt to encircle Odessa, the Fine Arts Museum there has encircled itself with razor wire.

“Trust me, it looks really wild to me, too,” said Kirill Lipatov, the museum’s director of science.

As in Lviv’s museums, the walls inside are now bare, Lipatov said, but he declined to reveal whether its most valuable works had been evacuated outside of the city. Some of the pieces were painted inside the museum — an ornate palace dating to the 1820s — and have never left it, including iconic 19-century Russian works by Ivan Aivazovsky and Ilya Repin. 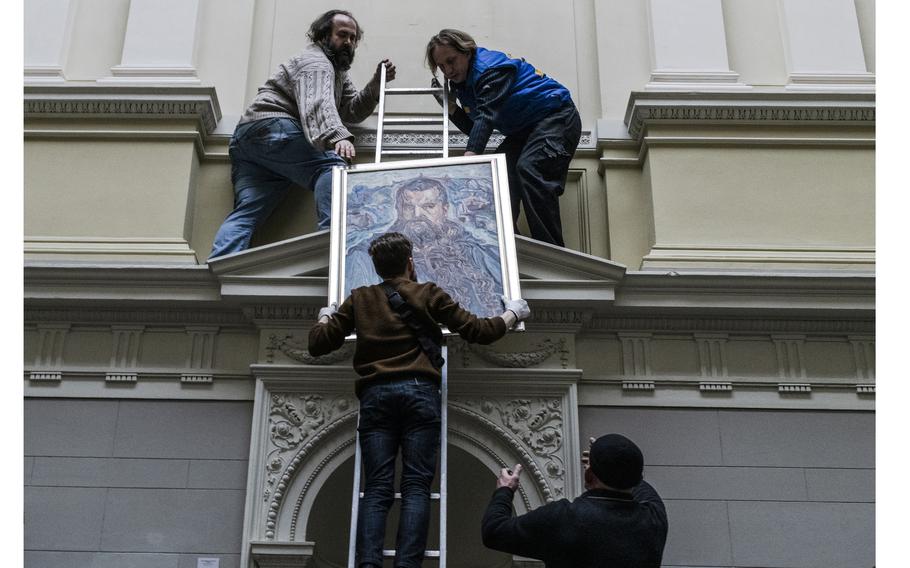 The portrait of Metropolitan Archbishop Andrey Sheptytsky painted by Oleksa Novakivsky is the last painting to be taken down from the walls in the Andrey Sheptytsky National Museum in Lviv on March 7, 2022. (Kasia Strek/for The Washington Post)

“The first thought that came to mind for me is that a Ukrainian museum is protecting Russian masterpieces from Russian aggression,” Lipatov said. “I can’t wrap my head around it.”

Even as they struggled to believe it, museum directors also said their plight was hardly unfamiliar. Ukraine has been stripped of artwork by invaders multiple times over the past century.

After Russia’s invasion and annexation of Crimea in 2014, dozens of works that were located on the peninsula were transferred to Russian museums. During World War II, thousands of works were taken by Nazi soldiers to Germany. A portrait of Yakov Galkin, the director who evacuated Odesa’s Fine Arts Museum during World War II, hangs in Lipatov’s office.

Saving art was secondary only to saving lives, many of those interviewed said, because Ukrainians’ pride in their culture serves as a deep well of inspiration for its resistance to invasion. Putin has made it clear that he considers Ukraine to be part of greater Russia, a contention artists here say denies Ukraine’s distinct heritage.

“With each invasion, some loss of culture is inevitable,” said Taras Voznyak, director of the Lviv National Art Gallery. “Putin knows that without art, without our history, Ukraine will have a weaker identity. That is the whole point of his war — to erase us and assimilate us into his population of cryptofascist zombies.”

While museums often have their own bunkers, or wider networks in Europe they can rely on to house some of their art, independent galleries and artists are relying on each other.

One of the most successful efforts to protect Ukraine’s contemporary art is underway in the western city of Ivano-Frankivsk, where an artists’ collective has converted a subterranean cafe into a bunker. Working day and night with a network of van drivers, the works of more than 30 artists — from delicate collages to hanging sculptures to giant, 6-by-14-foot paintings — have been whisked here from all over Ukraine. Eleven artists who fled their homes have also been offered residencies to keep producing art through the war.

“A lot of our artists are questioning their role — like, shouldn’t I pick up a gun? Does art as a weapon act too slowly?” said Anna Potyomkina, 25, a curator who is part of the collective. “But creating art when Russia is bombing museums and studios is a big and necessary part of the resistance.”

Except for the piles of art swathed in bubble wrap waiting to be taken to the bunker, the collective is full of familiar creative culture: funky furniture, Apple computers, a shelf devoted to books on gender and feminism, walls covered with sticky notes and pictures of members and their friends looking stylish and happy before the war. Yaryna Shumska and her father, Ihor Shumsky, are both artists and tutors at the National Academy of Arts in Lviv. They share a studio in the residential area of the city, where they keep over 600 pieces. Some of their paintings are so big that they can be transported only with a crane through their windows. (Kasia Strek/for The Washington Post)

Yaryna Shumska, a Lviv-based performance artist and painter who describes herself on her website as a chronicler of “the memory of objects and their invisible stories,” would love to transport her most cherished artworks to Ivano-Frankivsk but worries they would get damaged in the process. If she needs to flee Lviv, she’s likely to leave her art where it is, and hope the bombs fall elsewhere.

“My friend’s studio in Kharkiv was bombed and all that’s left is an empty catastrophe,” Shumska said in her studio, cluttered with enormous paintings on canvas, some of which are dedicated to her husband, who died in October. “It’s an impossible question to ask yourself: Can I say goodbye to my work, which is almost like an extension of my body?”

The survival of so much Ukrainian art will ultimately depend on where the bombs fall.

In Odessa, Lipatov said the 123-year-old Fine Arts Museum is so delicate that it would surely burn to the ground if it were hit with a shell.

The bunker in Ivano-Frankivsk is not bombproof either. A direct hit would bury the hundreds of pieces stashed there, saving only some of them in a best-case scenario. Last week, Russia bombed the city’s airport.

“Right now, this is all we can do,” Potyomkina said. “Right now no one is famous, no one is jealous, nobody’s art is more important than anyone else’s. All the rivalries and existential crises are on hold. We have to do everything we can right now, or else we risk losing it all.”

The Washington Post’s Siobhán O’Grady in Kyiv contributed to this report. The collection from the Andrey Sheptytsky National Museum in Lviv has been taken down and placed in a safe area. (Kasia Strek/for The Washington Post)