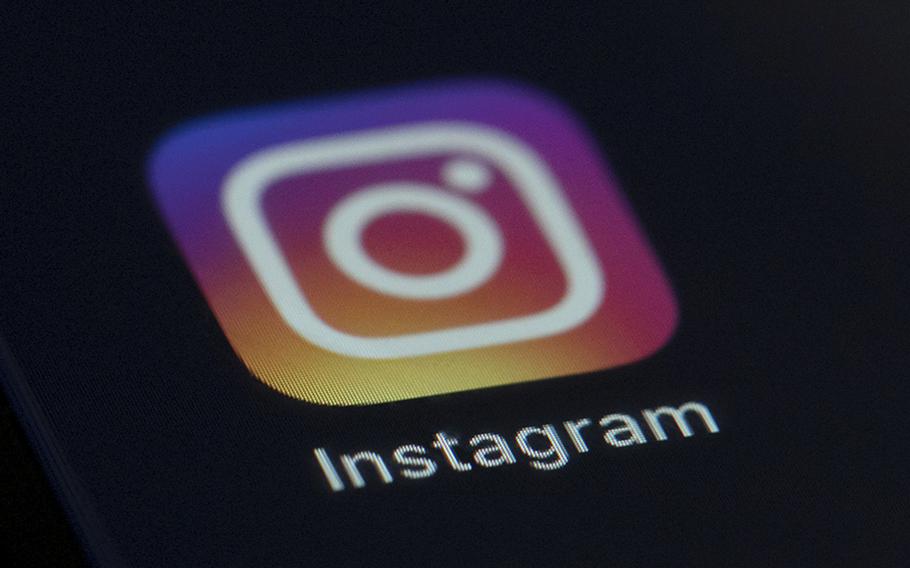 Russian regulators said March 11, 2022, that internet users in the country will be blocked from accessing Instagram. (Jenny Kane/AP)

RIGA, Latvia — The tears were flowing Sunday among Russia’s airbrushed Instagram influencers, who begged their followers in farewell posts to join them on alternative social media platforms, as Russian authorities prepared to shut down the U.S.-owned social network at midnight.

In its announcement of the move, the Russian regulator cited a decision by parent company Meta to allow posts calling for violence against Russians on Instagram and Facebook. The U.S. company made an exception to its policy against inciting violence, so long as the posts represented political expression against Russian forces invading Ukraine. Meta said calls for violence against ordinary Russian citizens would remain prohibited.

“The Russian government has decided to block Instagram in Russia, cutting off millions of people from loved ones and friends around the world,” Instagram head Adam Mosseri said in a video response. “We know that over 80 percent of people in Russia on Instagram follow an account from outside of Russia. The situation is terrifying, and we are trying to do all we can to keep people safe.”

On the platform, emotions ran high Sunday among Russians who were about to lose thousands of dollars they received to promote various products, as well as access to millions of followers amassed over the years.

“I’m writing this post now and crying,” Olga Buzova, a Russian reality television star, wrote, saying she hoped “it’s all not true and we will remain here.”

Russian authorities already had blocked Facebook access on March 4, citing discrimination against Russian state media on the platform. That shut down one of the most common platforms for critics of the Kremlin to express their views and organize demonstrations.

The ban on Instagram is the latest example of how Russia’s citizens are being isolated from the rest of the world as a result of Moscow’s war against Ukraine.

Since Russian President Vladimir Putin launched the invasion on Feb. 24, his government has also pulled the plug on Russia’s opposition-oriented radio and television networks, part of a broader effort to squelch domestic dissent in response to the war. Thousands of Russians have been arrested for attempting to protest the invasion.

A slew of international companies have announced their exit from the Russian market or suspended operations in the country, citing the war in Ukraine, after U.S. and European sanctions on the Russian central bank prompted the ruble to plummet. The string of announcements presaged a Russia without widespread access to popular consumer products, including Ikea furniture, H&M clothes and Starbucks coffee.

But perhaps no move is more isolating than removing Russians from social media platforms that connect them directly to other users around the world.

Instagram counted nearly 60 million users in Russia in 2021, according to the market data firm Statista, about 40 percent of the country’s population. The platform is also a huge revenue source for its users, who rake in cash from sponsors by posting promotional content. It is unclear how many Russians will continue to be able to access Instagram using Virtual Private Networks, or VPNs.

The shutdown of Instagram isn’t affecting only the Russian influencers who parade their designer clothes for millions of followers.

Russians who use Instagram to stay in touch with friends, post artistic photographs or share images of their children are also writing goodbye notes, sharing account information for Telegram, the messenger service that remains available in Russia.

Hundreds of small and medium-sized businesses, from tattoo studios to car repair shops, have lamented losing the platform that has long served as their main sales tool. Russian charities that raise money on Instagram are also reeling.

“Instagram isn’t just pictures. It’s also a large number of jobs and a chance to engage in good deeds,” a Moscow dog shelter called Husky Help posted on its Instagram profile. For the shelter, Instagram represents a community “amassed over years” and “one of the main instruments to help dogs.”

The Instagram ban is also impacting the few Russians who have spoken out publicly against the war, cutting them off from millions of Russian followers.

Russian media personality Kseniya Sobchak, who criticized the war and left the country, posted a photo of herself in a lace black funeral dress and told her 9 million followers how to follow her on Telegram and other services.

Nastya Ivleeva, a Russian influencer who has 18.9 million followers on Instagram, posted a drawing of a dove and called on Russian authorities to stop the war in Ukraine.

In a separate, since-deleted post she said, “Six great years of creativity, inspiration, motivation, discovery, achievement and accomplishment are flying straight into the hell hole.”

Russia hasn’t shut down access to YouTube, which some opposition-oriented Russians are using to get information about the war in Ukraine and bypass state news propaganda. Russian media outlets are not allowed to call the conflict a war, and must call it instead a “special military operation” to avoid violating a new national law threatening up to 15 years in prison for those who publish “fakes” about the war in Ukraine.

TikTok is still accessible in Russia, but the social networking site prevented Russian users from uploading videos after Putin signed the new law on March 4.

As they said farewell to Instagram, many Russian influencers posted QR codes that allowed users to follow them on Telegram instead, as well as links to their profiles on the Russian state controlled social networking platform VK. Some have said they will be saying or posting things on Telegram that Instagram rules have prevented them from sharing.

Oksana Samoylova, a Russian Instagram influencer with 15.2 million followers, said she was up until 3:30 a.m. Sunday writing Telegram posts and realized how much she had been bottling up due to Instagram’s rules.

“You’ll soon meet my alter-ego,” she said. “Not really my alter-ego, actually, you’ll just get to know me much closer, because there I can be much, much more open.”

By Sunday afternoon, Samoylova noted it was already past midnight in Russia’s Far East, so users there were unable to access her Instagram profile, even while using VPNs.

Karina Nigay, a Russian fashion influencer with 2.9 million followers, posted a photo of herself in “hysterics” being hugged by a young man.

“This is my work,” Nigay said in a live video. “Imagine you were just fired completely from work and you aren’t receiving any income at all, but at the same time you have expenses for your family, for your team if you have subordinates, and then all of a sudden you have nothing to pay your team.”

She later put a positive spin on the situation, saying it would be good for Russian fashion brands. She noted she already had redone her wardrobe to feature 80 percent Russian clothes over the years. Nigay said maybe a social media platform called “Rusogram” would crop up.

Ukrainian followers reacted with disgust to Russians lamenting the shutdown of their Instagram profiles. “Wow, those are some problems you have,” one Ukrainian follower wrote in the comments to Nigay’s video. “I’m shocked, we have air sirens on here,” another said.

Nigay sought to shut down such comments, dismissing them as “propaganda stories” during her live video.

“Listen, to those who are writing all sorts of filth, all these propaganda stories, I absolutely don’t give a s---,” Nigay said. “Seriously get the hell out of here.”

A scene from the Hollywood apocalypse comedy “Don’t Look Up” was going viral Sunday as a description of how Russian social media influencers were feeling. In the scene, Jonah Hill’s character, carrying an Hermes Birkin bag, crawls out from under the debris of the obliterated world and takes out an iPhone to film himself.