From stage to battlefield: Some ballet dancers have taken up arms 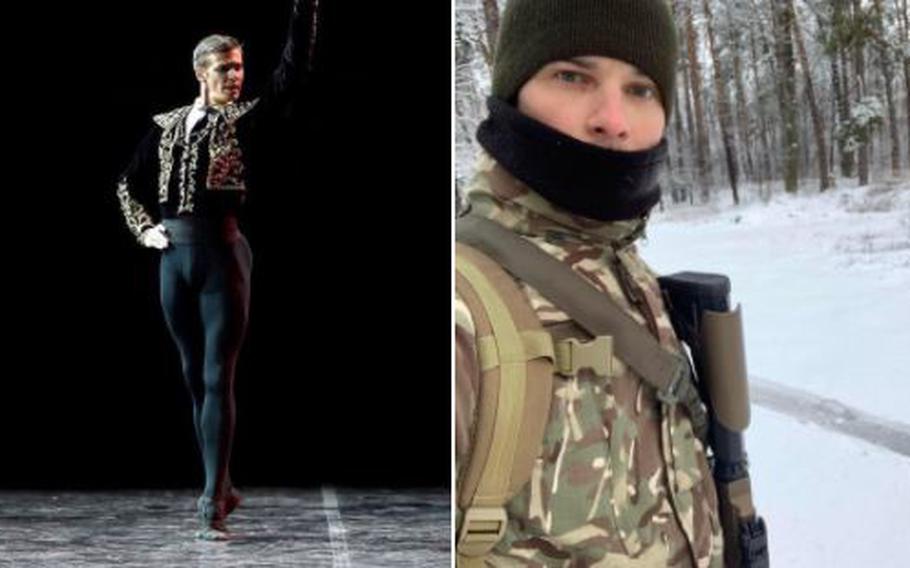 Side-by-side photos of Ukrainian dancer Oleksii Potiomkin capture the stark irony of his life. In one shot, he’s an elegant ballet prince, snapped midair in a magnificent leap. In the other, he’s standing in the snow, wearing military fatigues and carrying a weapon. (Twitter)

Side-by-side photos of Ukrainian dancer Oleksii Potiomkin, posted recently on Twitter, capture the stark irony of his life. In one shot, he’s an elegant ballet prince, snapped midair in a magnificent leap. In the other, he’s standing in the snow, wearing military fatigues and carrying a weapon.

“The ballet dancer has joined up,” wrote Natalia Antonova, the Washington, D.C.-based journalist who posted the photos, “like many people from all walks of life in Ukraine.” Her post, from March 2, has been shared about 25,000 times.

Potiomkin is a first soloist with the ballet company of Kyiv’s National Opera of Ukraine, where he’s earned the title “honored artist of Ukraine.” At this point in any ordinary spring season he’d be in a studio rehearsing the leading roles in, say, “Swan Lake” or “Giselle.” Needless to say, none of that is happening now. As the war in Ukraine is forcing the world to fundamentally reassess its actions and allegiances, artists are not immune. A number of ballet dancers are making drastic, career-altering decisions — and some are finding themselves, like Potiomkin, in life-threatening situations.

Among these is Lesya Vorotnyk, also with the Kyiv ballet company. She is identified as the striking young woman in a recent Twitter post wearing a khaki military cap and holding a rifle in her slender fingers. (Her trigger control has earned admiration from followers.) 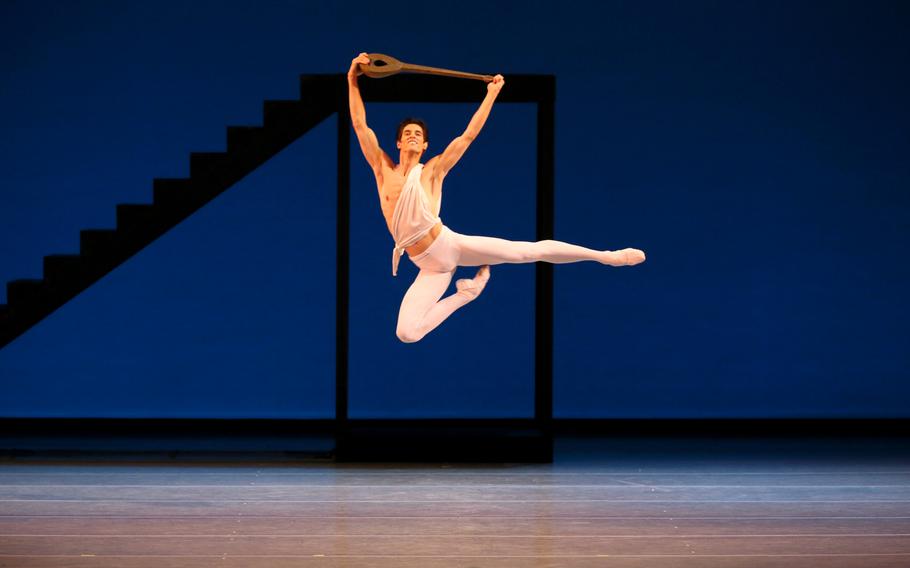 In Russia, two principal dancers have broken ties, at least temporarily, with the famed Bolshoi and Mariinsky companies. Xander Parish has quit the Mariinsky, his artistic home since 2010, when he became the first English dancer invited to join the St. Petersburg company, where such ballet royalty as Rudolf Nureyev, Mikhail Baryshnikov and Natalia Makarova once danced.

“Tonight I was supposed to be performing ‘Giselle’ at the Mariinsky Theatre,” Parish wrote on Instagram this week, “but instead, due to the awful crisis I have taken the difficult decision to leave Russia, at least until peace comes. My heart goes out to the people of Ukraine.”

Italian dancer Jacopo Tissi has left the Moscow-based Bolshoi Ballet, writing on Instagram in English and Italian: “I find myself unable to continue with my career in Moscow, for the time being.” 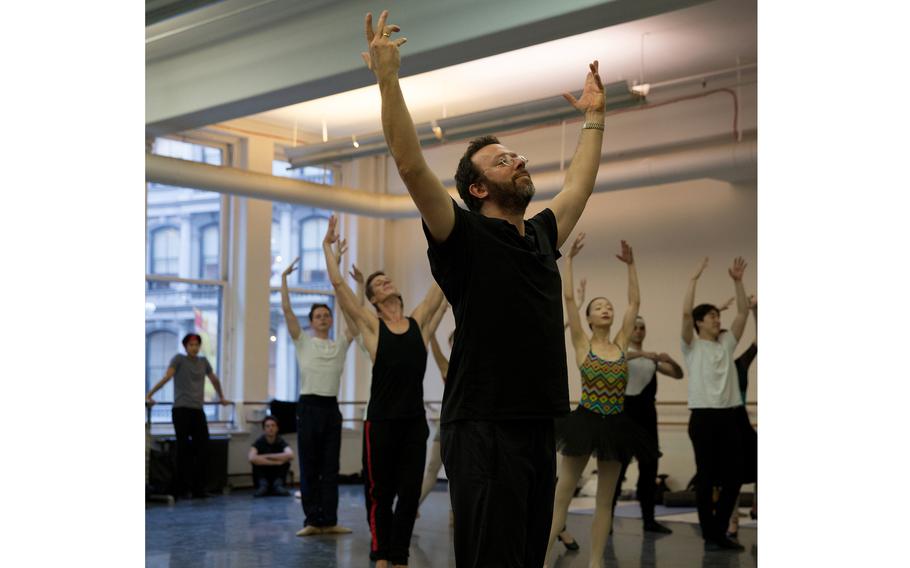 Alexei Ratmansky in rehearsal with dancers of the American Ballet Theatre. (Rosalie O'Connor)

The Bolshoi suffered another abrupt departure when Alexei Ratmansky, the renowned St. Petersburg-born choreographer who once ran the company, stopped working on a ballet he was creating there and flew home to New York. According to the New York Times, Ratmansky decided to leave the day Russian President Vladimir Putin launched his invasion of Ukraine, and he’s not sure when he’ll return to the Bolshoi to finish the production. “I doubt I would go if Putin is still president,” he told the Times. Ratmansky, who is artist in residence of American Ballet Theatre, grew up in Kyiv and still has family there.

His decision and those of other dancers protesting Russia’s aggression have impressed Kateryna Derechyna, a Ukrainian member of the Washington Ballet who grew up in Odessa and trained at the Odessa Ballet Academy. 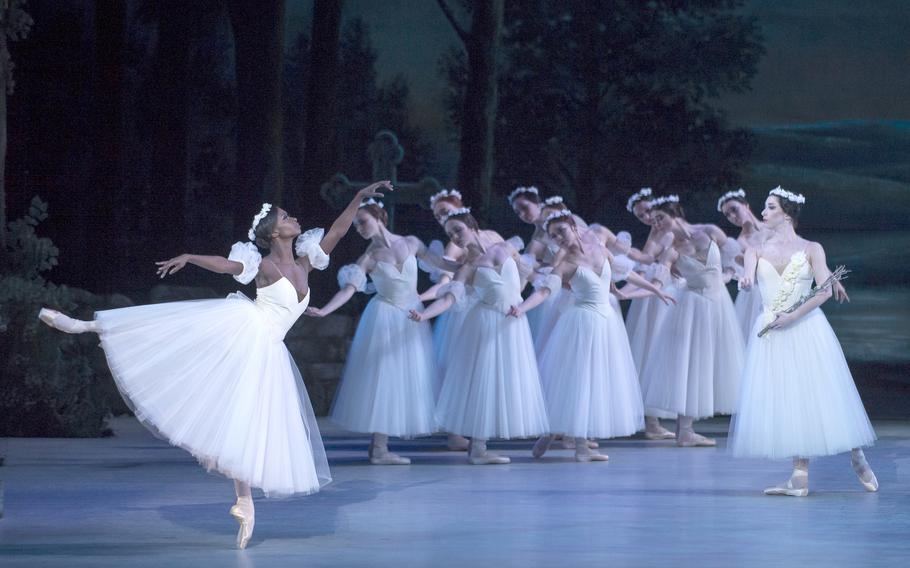 “It really warms my heart to hear of people helping,” Derechyna said. “Ratmansky has been amazing, reaching out to dancers on social media all over the world. Ballet is a highly international art form, and we are one big ballet family. So for us to feel like we could be at war with each other is surreal. I have never been in a ballet company where there aren’t dancers from all over the world, and we all support each other.”

Derechyna said that when she saw the photos of the Ukrainian dancers Vorotnyk and Potiomkin, who is the father of a young child, she felt an instant bond. She understands the dancers’ strength and courage.

“It is unbelievable to go from all the grace and beauty of creating this art form,” she said, “and then to have the complete opposite, standing with a gun. It’s just unbelievable to see that that would be your reality when one week ago you were dancing onstage. But that’s the fearlessness — doesn’t matter, women or men. We are very strong and fearless. I’m not shocked that the women are willing to do anything for their country and their family.”

Derechyna spoke wistfully of the beloved Odessa National Academic Opera and Ballet Theater, where she danced as a teenager. “It’s the most magical place I’ve ever been. The smell, the beautiful chandelier, the red velvet seating, the balconies. It’s just so grand.”

She worries about her mother, who still lives in that city on the Black Sea. Her worst fear, she said, is “not to be able to walk on the streets where I grew up.” Her voice broke off, and then she added the sentiment that is surely animating her fellow artists who have taken up arms: “Not to have my country anymore.” 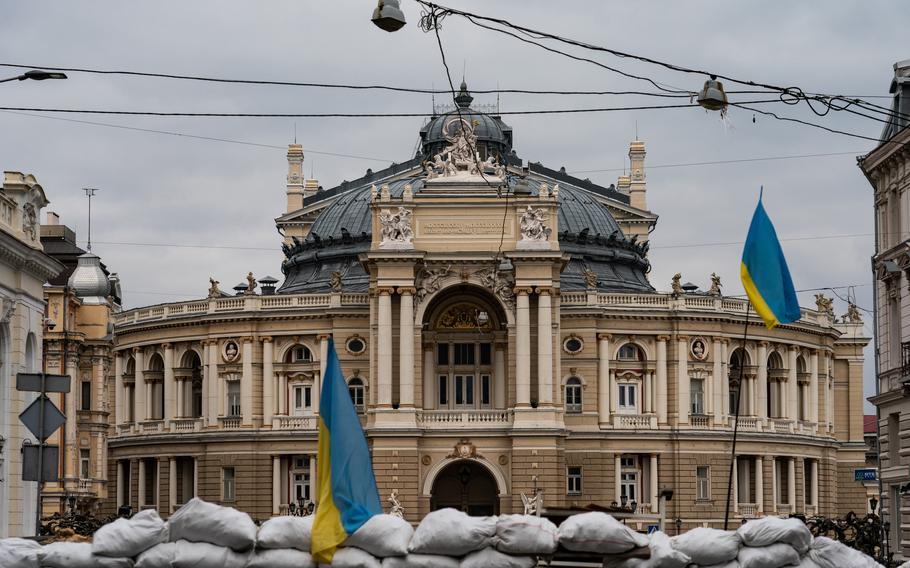 Sandbags and barricades have been placed near the Odesa National Academic Opera and Ballet Theater in downtown Odesa, Ukraine. "It's the most magical place I've ever been," says one dancer. (Salwan Georges/The Washington Post)