Amid war and brutality, Ukrainians are transformed and united 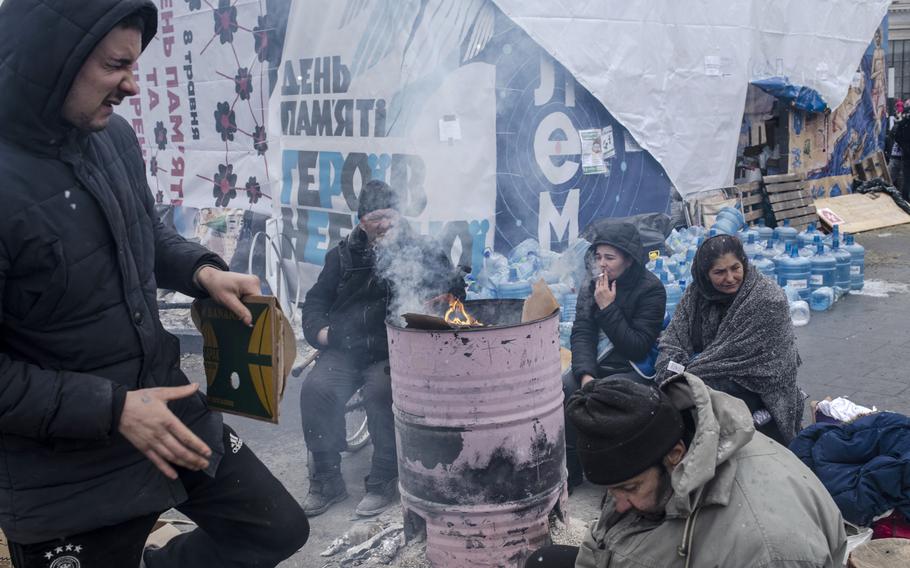 People hoping to flee to Poland wait hours to enter the main railway station in Lviv on March 7. (Kasia Strek/for The Washington Post)

LVIV, Ukraine — In the first hours of the Russian invasion, Stas Dikiy joined hundreds of people crammed into an underground metro station in Kharkiv, Ukraine’s second-largest city, to shelter from thunderous missile strikes shaking the ground above him.

“I don’t know how realistic it is,” Dikiy, 22, said at the time, “but I’d like to hear in a few hours some news saying: ‘We have survived. Kharkiv has been saved. Everything’s great. There are no more occupiers. Everyone can go back home and keep living their normal lives.’ ”

Two weeks later, Dikiy had fled and was sleeping on a relative’s floor, his life, along with every other Ukrainian’s, transformed as the nation has gone from tense peace to total war at blinding speed.

“This has to end at some point, right?” he said when reached by phone Thursday.

In interviews across the nation, Ukrainians described unthinkable changes in their lives that would have seemed absurd less than a month ago, when President Volodymyr Zelenskyy was still reassuring his country that Russia would not launch a full-scale invasion.

In some places, much of life is now happening underground: Babies are being born in basement maternity wards. Wounded fighters are being treated in bunkers. Entire apartment buildings full of families have relocated their lives to subterranean parking garages. 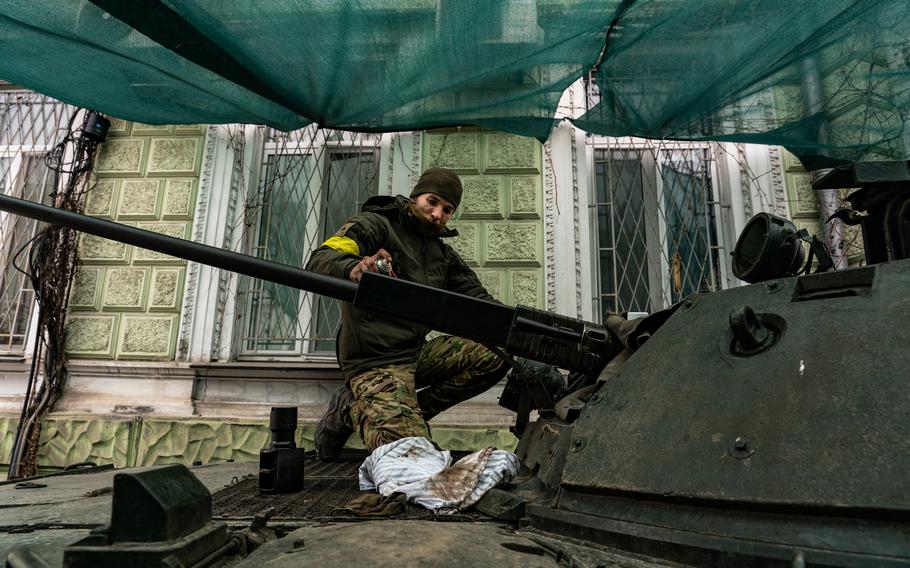 A Ukrainian soldier atop a tank in Odesa on March 5. (Salwan Georges/The Washington Post)

The cities of Kharkiv and Mariupol have been crushed as Ukraine’s enormous neighbor continues its devastating campaign of shelling across the country. Once known for their grand boulevards and architecture, these cities have joined Dresden and Aleppo as symbols of the utter destruction of war.

More than 2 million people have fled Ukraine — with countless more displaced inside the country — in the fastest and most thorough exodus Europe has seen since World War II. Lviv and other cities in the west, and even tiny villages in the Carpathian Mountains, are overrun with people who have abandoned their homes elsewhere.

Half of Kharkiv’s population has fled, as have hundreds of thousands more from the capital, Kyiv, and the cultural capital and seaport of Odesa, which are bracing for brutal sieges that seem all but inevitable.

Amid the chaos, even the most basic facets of life have changed. No one says “Hello” anymore; they say “Glory to Ukraine.” Adults don’t have offices. Children don’t have schools.

In Kyiv, once-teeming squares are almost empty at midday as air raid sirens blare and Russian troops work to encircle the capital. Most streets are blocked by makeshift barriers to slow down the tanks most believe will soon flood the city.

Grocery stores and pharmacies are the only businesses open. Sales of alcohol, in a country that loves to drink, are banned. Bars have become bunkers.

Posters from before the war — opera schedules stretching into the spring, reminders to wear masks indoors — have been plastered over with exhortations to join the resistance.

People from all walks of life have learned to handle Kalashnikov rifles.

Throughout western Ukraine, where Russian shelling is less regular, every bed and couch is occupied as virtually everyone helps host and feed the unending stream of refugees who arrive each day from the east.

It took just days for Maryna Potikha, 48, to transform into a warrior.

She was an experimental artist, not given to patriotism. She described herself as motherly — and she still drives around the city of Bila Tserkva, 50 miles south of Kyiv, spreading cheer with her wide smile and enveloping hugs, delivering homemade pickles, cured pork fat and freshly baked bread to soldiers manning checkpoints. She has cleared out her art studio, where soldiers now sleep on the floor. But the thought of all the children who are suffering enrages her. 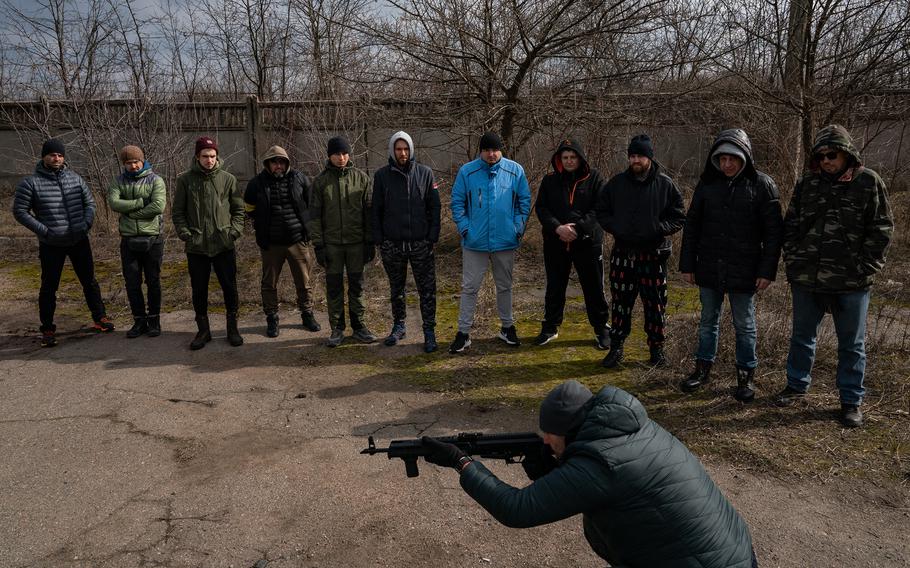 Potikha is typical of a national transformation in which people have shifted from normal lives to spending every minute on the war effort. Suddenly, everyone is willing to help one another.

Potikha said the war had made her realize how beautiful her country and countrymen are.

Volodymyr Iksar would have normally found it strange that his high school classmate Valya, whom he had seen only occasionally over the past 40 years, called to ask him to do something dangerous — to drive her elderly mother from the city of Odesa to the Moldovan border, at least a three-hour journey each way.

But she said only he could do it. She said she trusted him fully, that she knew he was the right choice.

He did it without hesitation. “This is the time where people just help without asking questions,” he said. “It doesn’t matter how well you do or don’t know the person. You just reach out your hand and help.”

Trust, once hard-won, is now freely given and received out of necessity. Some have become guardians of family heirlooms belonging to people they barely know. Fighters on the front lines, at the request of worried mothers, never let their sons out of their sight.

The trust — and the sense of unity — has become a source of strength even among those who once felt weak.

With only a five-day supply of her antidepressants left, Sasha Diachenko, 24, joined a line snaking outside a jam-packed pharmacy in central Kyiv on Thursday.

Ahead of her was a crowd of shivering civilians who had been lined up for hours in freezing conditions. With supplies dwindling, they prayed that the medications they needed would be in stock.

Two weeks ago Diachenko was a film student. Now she is volunteering as a kitchen worker to help feed volunteer troops.

Despite the horrors of the war unfolding around her, taking on her new role “was actually the first time I felt less depressed,” she said, glancing at the yellow tape stuck to her jacket sleeve, signaling that she belonged to the volunteer territorial defense forces. “I just knew what I had to do.” 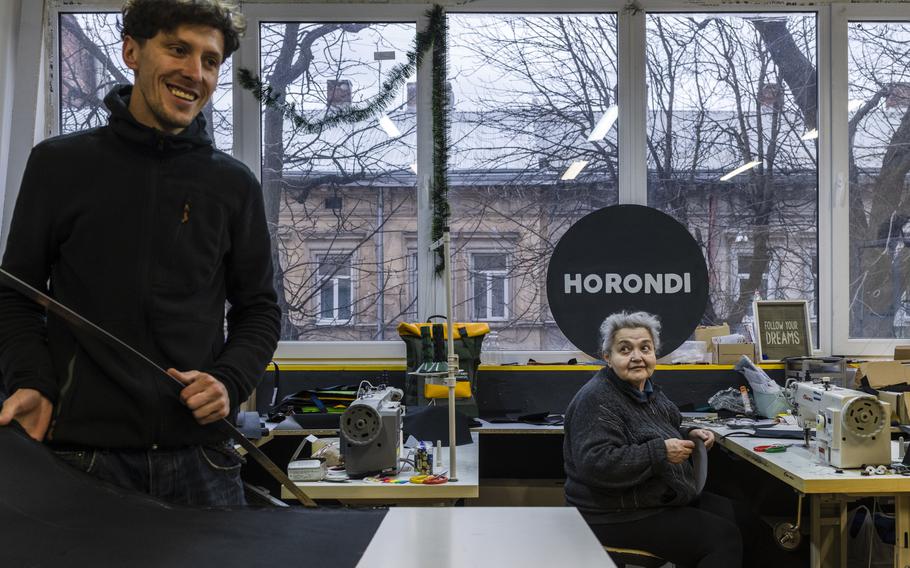 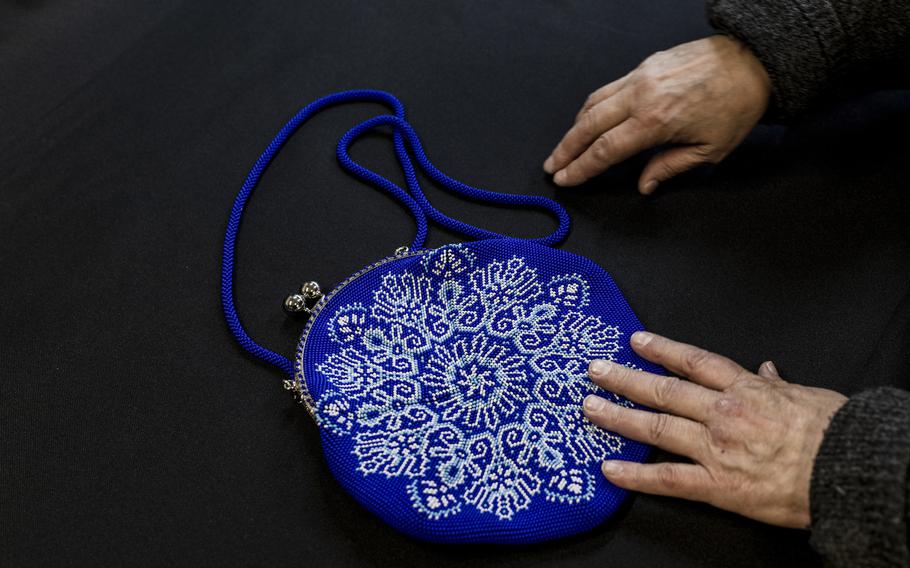 Halyna Butenko, amid the throngs fleeing Kharkiv, abandoned a heavy suitcase full of her embroidery creations. But she didn't lose everything. (Kasia Strek/for The Washington Post)

In Lviv, the historic western city now filled with the displaced, Halyna Butenko, 65, smiled as she recounted her 650-mile journey from Kharkiv, focusing on the silver linings.

After decades working as an anesthesiologist, she lived alone. Her husband had died, her son had emigrated to New Zealand. A soldier had helped her get to the city’s railway station, where thousands frantically jostled for space.

In her retirement, she had taught herself how to embroider by watching YouTube videos, and she carried a suitcase full of her creations, which she hoped to sell to keep cash in her pocket. But it was too heavy. She deserted it on a staircase. And amid the crush of people, she almost gave up.

Then, on the platform, “an angel appeared,” she said. At first, Butenko was so exhausted that she didn’t notice 25-year-old Maryna’s fuchsia-dyed hair. But the unlikely pair — the punk girl and the “babusia” — stayed together on the train until Lviv. There, Maryna left Butenko at a shelter in a converted warehouse where, before the war, Goths and geeks and techno-heads threw raves and made art.

Butenko is now under the tutelage of Sasha Horondi — a man who has the Chinese character for “respect” tattooed on his neck and who would not look out of place in Brooklyn or Berlin. He ran a hugely successful business making fashionable backpacks. His sewing machines are now devoted to stitching body-armor vests for the front line.

A grin spread across her face and she said, “Let me show you something.”

She reached into her backpack and pulled out an embroidered purse. Somehow, one of her creations had made it, she said with wonder. It would become a good-luck charm.

“The most important thing I’ve learned,” she said, “is that being Ukrainian means fighting to the end.”

Khurshudyan reported from Kharkiv and Odesa. The Washington Post’s Siobhán O’Grady and Sudarsan Raghavan in Kyiv and Loveday Morris in Zaporizhzhia, Ukraine, contributed to this report.