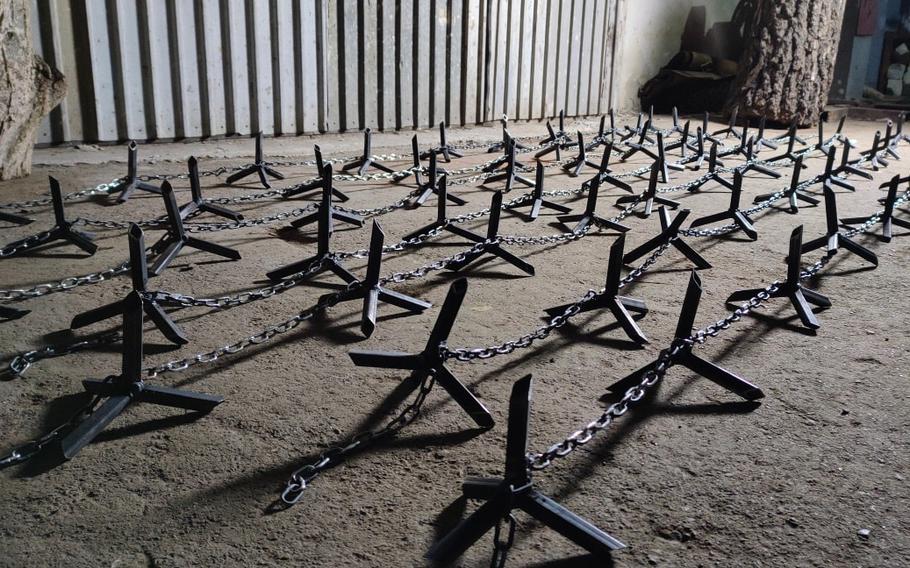 Art of Steel in Rivne, Ukraine, is making chain-linked caltrops to stop Russian vehicles at its city's checkpoints. The workshop typically makes medieval armor for sport but is now contributing to the war effort. (Art of Steel)

Until a few weeks ago, Art of Steel in western Ukraine made silver chain mail, helmets and other armor for reenactments and show. But as Ukrainians look for any way to defend their cities from Russian invasion, the company’s mission has turned far more serious.

Blacksmiths with Art of Steel, which has produced medieval armor for sport since 2009, are now using their materials to create caltrops — sharp, 6-inch spikes that date back to ancient wars. The devices are being chained together and placed at checkpoints around Rivne, a city about 210 miles west of Kyiv. The goal, according to a company official, is to use the devices to slow or stop Russian vehicles from entering Rivne. The city is home to one of Ukraine’s nuclear power plants, which some worry could be targets for Russia.

In the last two weeks, the shop has produced hundreds of the caltrops, said the company official, who spoke on the condition of anonymity out of concern for his safety.

“Ukrainians [are] united in this war,” he told The Washington Post. “Absolutely everyone is trying to help in the fighting places and in the rear. Therefore, any materials are somehow used.”

Art of Steel joins a nationwide effort to produce weapons that can be used against Russian forces, which invaded the country on Feb. 24. People across Ukraine are filling empty bottles with materials to make molotov cocktails. Other volunteers have sewn cloth covers to help camouflage Ukrainian military equipment.

Within days of the invasion, Art of Steel had welded dozens of the metal devices, also called “hedgehogs.”

“Soon there will be a lot more,” the organization wrote on its Facebook page.

The efforts are reminiscent of the 1940s-era scrap-metal drives and other initiatives to get Americans to contribute during World War II, said Mark Cancian, a senior adviser with the Center for Strategic and International Studies, a Washington think tank.

“There’s a little of that flavor of the getting the whole population involved,” Cancian said.

A blacksmith with Art of Steel saw the idea to place caltrops at barriers and checkpoints online and offered to start making the devices, the organization official said. Videos on the shop’s Facebook page show the devices, which span between four and six inches, being strung together on chains.

The spikes are now at every checkpoint in Rivne, according to Art of Steel. The sharp metal can pierce tires.

“With proper use, it will help stop [a] column of vehicles or at least delay them for a while,” the official said.

Much larger and heavier versions of the barriers were seen lining streets in Kyiv to stop Russian tanks from moving through the city, Reuters reported.

Caltrops date back to as early as 331 B.C., when Alexander the Great used them against the Persians, according to Historynet. Originally just a ball with four spikes, the devices could cause puncture wounds in humans that could lead to infection or slow death, the outlet reported.

They were also used to stop fighters on horseback, Cancian said. Today, versions of the spiked devices are still used by law enforcement to control traffic patterns or by military personnel to guard vehicle checkpoints in combat zones, he said.

“I saw some of those in Iraq,” said Cancian, a retired Marine Corps officer. “We’d have the equivalent and put it out in front of a checkpoint so a vehicle couldn’t just roll through.”

They can be especially effective if the checkpoints are guarded by armed personnel, he added.

Aside from caltrops, Art of Steel is also making plates for body armor. And its blacksmiths aren’t the only ones contributing to the war effort in Rivne: All the city’s metalworkers “are trying to help the army in some way,” one blacksmith there told the Telegraph.