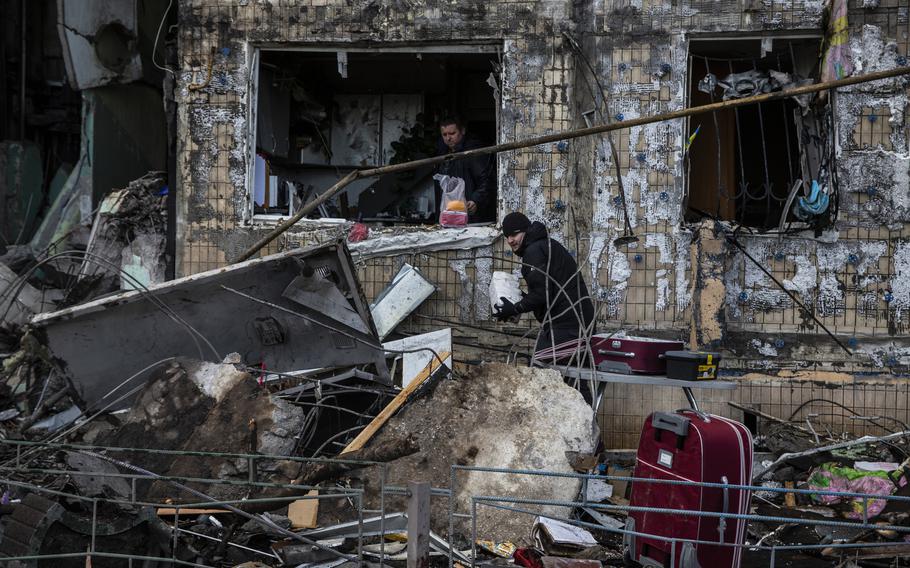 People retrieve belongings from a destroyed residential apartment block, in the northwestern Obolon district of Kyiv on March 14, 2022. (Heidi Levine/for The Washington Post)

KYIV, Ukraine — The sidewalks were covered in bits of glass and bloodstains. A green trolley car sat crumpled, a taxi smashed into its side. Next to a crushed car lay what appeared to be a body, covered by a piece of tarp.

In a park across the way, Irina Kostiuk, 38, stood staring at the scene, clutching her bleeding hand. She had been inside one of the buildings damaged in the Monday morning attack in Kyiv’s Podilskyi district, volunteering at a humanitarian aid center to help disabled civilians. Around 11 a.m., she heard a loud boom and felt the windows shatter.

“The shock wave knocked me off my feet, and glass debris got me a bit,” she said. “I was lying on the floor for a few minutes, waiting to see what happens next.”

City officials later described the attack as a missile or rocket strike that hit near a checkpoint close to residential buildings. It killed at least one person and wounded several others.

As at many other temporary checkpoints in the capital, the trolley car damaged in the attack had been serving as a temporary barricade, dragged into the street to slow down traffic. 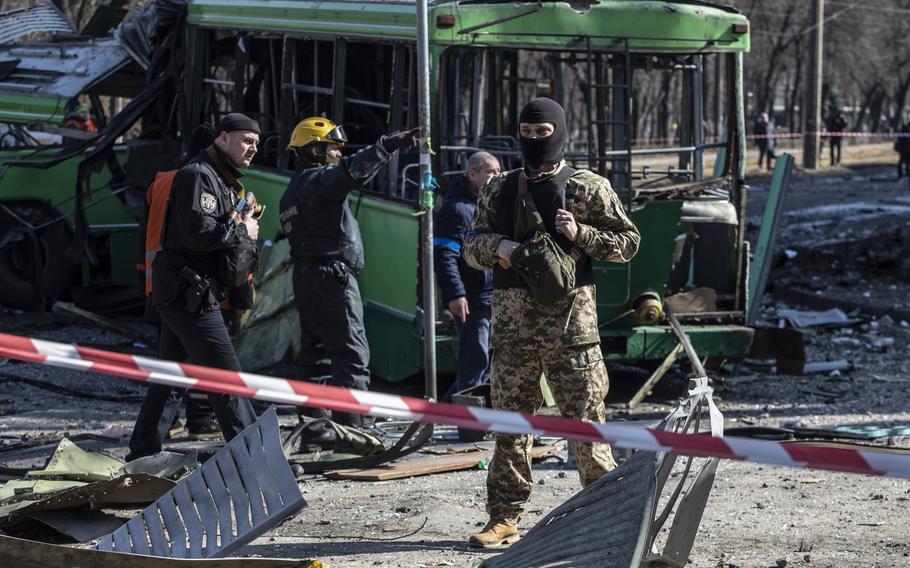 A Ukrainian soldier stands by a destroyed trolley car in Kyiv on March 14. (Heidi Levine/for The Washington Post)

The strike came only a few hours after apparent Russian shells struck a nine-story residential building in Kyiv’s Obolon district, at around 6 a.m. Residents fled the badly damaged building as firefighters tried to extinguish the flames and rescue those trapped inside. At least one person was killed in that incident as well, according to Red Cross volunteers at the scene.

The two attacks left residents in Kyiv on edge, with fears mounting that if Russian forces continue to close in on the capital, it could soon face immense damage and high civilian casualties, comparable to what has unfolded in the besieged cities of Kharkiv and Mariupol.

By midmorning, the second building was no longer on fire, but the damage had rendered much of it unlivable. One area was badly burned. Most of the windows were shattered, exposing the insides of apartments to winter weather.

The broken windows offered views into lives that until Monday morning had been peaceful. Through one, a tapestry hanging on a wall fluttered in the wind. Through another, shelves of cassette tapes appeared untouched.

On one damaged balcony with a small Ukrainian flag planted on the ledge, several residents stood solemnly looking down at the crowd of journalists gathered below. 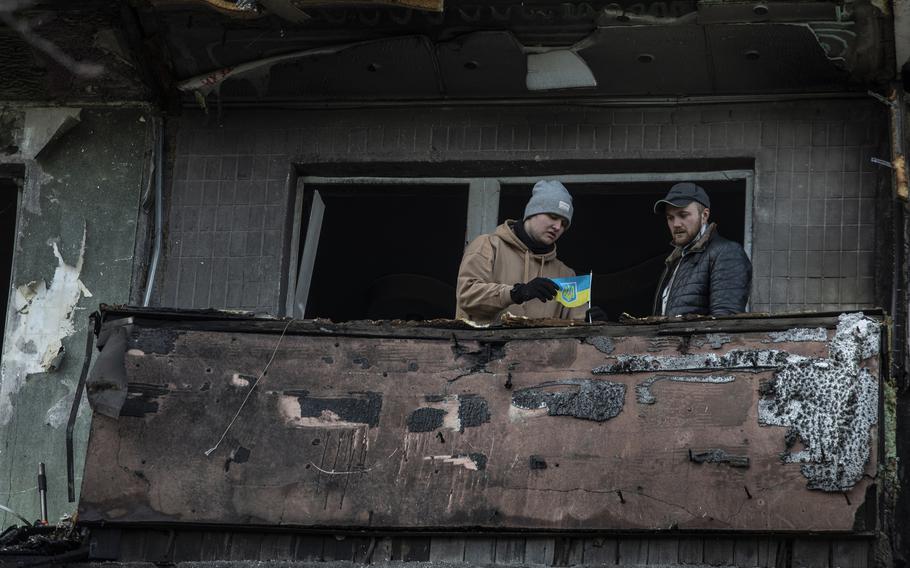 People on the balcony of a building in Kyiv's Obolon district, hit by a Russian strike on March 14, 2022. (Heidi Levine/for The Washington Post)

Emergency workers helped evacuate residents and pets. One family clutched a pet turtle as they left the scene. Others went in and out of the destroyed building, carrying plastic bags of clothes and other belongings to their cars.

The strikes sparked fears over what could come next for the city. Kyiv has come under bombardment but so far has been spared the worst of the fighting seen elsewhere in northern and eastern Ukraine. Half of the city’s 4 million residents have fled, according to officials. Those who stayed behind are bracing for a Russian offensive to take the capital.

Ukrainian President Volodymyr Zelensky and key advisers have stayed, posting defiant videos of themselves there to rally Ukrainians. On Sunday, Zelensky visited a Kyiv hospital to award medals of honor to injured soldiers.

Russia has denied targeting civilians in what it calls a “special military operation,” despite evidence of such attacks verified by The Washington Post, among others.

Tamara Tilchik, 64, who lives just around the corner from the buildings in Kurenivka that were badly damaged, stood staring at the cordoned-off area in disbelief on Monday.

“It’s a beautiful residential area,” she said. “I could never imagine in my worst nightmare that Russia would invade us.” A wounded man with his head bandaged after Russian strikes hit the Kurenivka area of Kyiv on March 14, 2022. (Heidi Levine/for The Washington Post)

Volodymyr Borysovich, 54, stood to the side, gazing up at the shattered balconies above.

His friends Serhiy and Natalia and their daughter, Alina, who is disabled, live on the building’s third floor. “Now they are not picking up their phone,” he said as he puffed anxiously on a cigarette.

The casualties in Kyiv on Monday added to the war’s devastating toll on civilians, who have borne the brunt of Russian bombardments, sieges and indiscriminate violence since the Feb. 24 invasion.

The United Nations has confirmed the deaths of nearly 600 civilians — though the actual count, it cautions, is probably much higher. Ukrainian officials say Russian attacks have killed thousands of people: Just in the besieged port city of Mariupol in southern Ukraine, more than 1,500 people have died, according to its mayor.

Kostiuk, who had volunteered at the humanitarian organization whose office was damaged Monday, said she didn’t know why the area was struck.

“There were checkpoints here, and I guess our humanitarian office is also a strategic object. It’s hard to say,” she said.

Kyiv Mayor Vitali Klitschko, who came to survey the scene, said in a video he posted that “this is what Russia’s war against civilians looks like: destroyed buildings, destroyed infrastructure.”

“Lives are getting lost,” he said. “That’s the war that Russia started.”

Hassan reported from London and Berger from Washington.