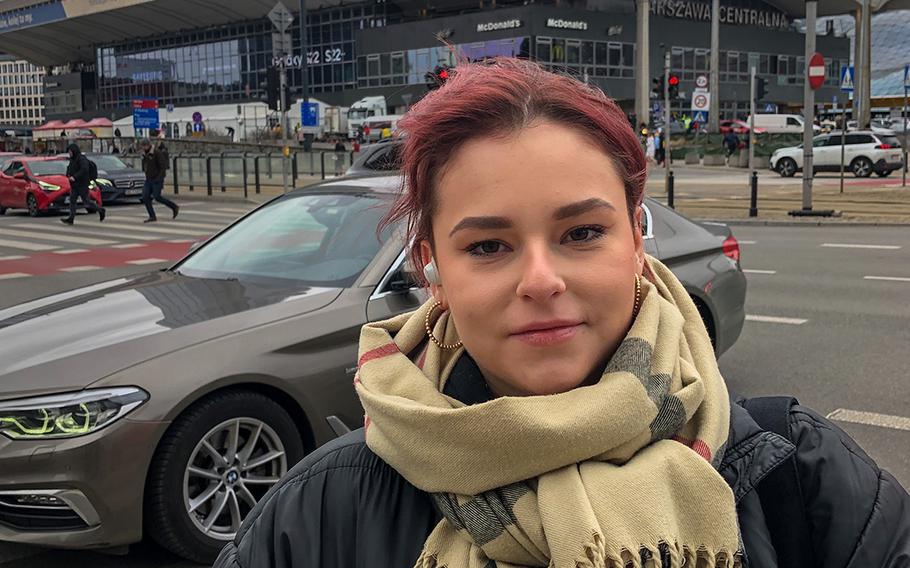 Justina Dziwicka, a child care worker, stands in front of the main train station in Warsaw that has become a hub for Ukrainian refugees. (Noah Bierman, Los Angeles Times/TNS)

Officials in Poland’s two largest cities have warned that they can no longer cope with the waves of refugees fleeing Russia’s invasion of Ukraine.

The mayors of both Warsaw, the capital, and Krakow, Poland’s second-largest city, said that they are struggling to accommodate the sheer number of people who are arriving — and urged the United Nations and European Union to intervene.

More than 2.5 million Ukrainians have fled to neighboring countries since the war started on Feb. 24, according to the United Nations High Commissioner for Refugees. The vast majority — 1.5 million people — have sought refuge in Poland, with smaller numbers fleeing to other countries such as Hungary, Moldova and Slovakia.

The head of UNHCR, Filippo Grandi, said the Ukraine exodus was “the fastest-growing refugee crisis in Europe since World War II.”

And with few signs that the war would abate, the agency has warned that an estimated 4 million people could flee Ukraine.

In a Facebook post Friday, Krakow Mayor Jacek Majchrowski said that his government would begin sending Ukrainian refugees to accommodation outside the city, including in the surrounding province of Małopolska.

“We have been helping Ukraine since the first days of the war, but as a local government, we are first responsible for the citizens,” he said, adding that more arrivals could hinder “the functioning of the city.”

But in Warsaw, whose population is roughly 1.7 million, Mayor Rafał Trzaskowski also said Friday that his city “remains the main destination for Ukrainian refugees” and that roughly 300,000 have arrived so far.

The “situation is getting more and more difficult every day,” he said on Twitter. Local media reported that Trzaskowski urged the U.N. and European Union to intervene and support Polish cities grappling with the crisis.

Most refugees want to stay near the border or in major cities, a spokeswoman for the Krakow mayor said Thursday, local media reported. But the influx, she said, has become “a huge organizational problem for the city.”

Majchrowski said that Ukrainian-speaking officials and volunteers would be posted at Krakow’s main railway station around-the-clock to assist new refugees.

On Twitter, Trzaskowski put out a call for donations for Warsaw’s efforts.

“Warsaw stands and will #StandWithUkraine. Support. Donate,” he tweeted.