Suffering goes on in encircled Mariupol as evacuation fails

Associated Press • March 8, 2022
This story has been corrected. 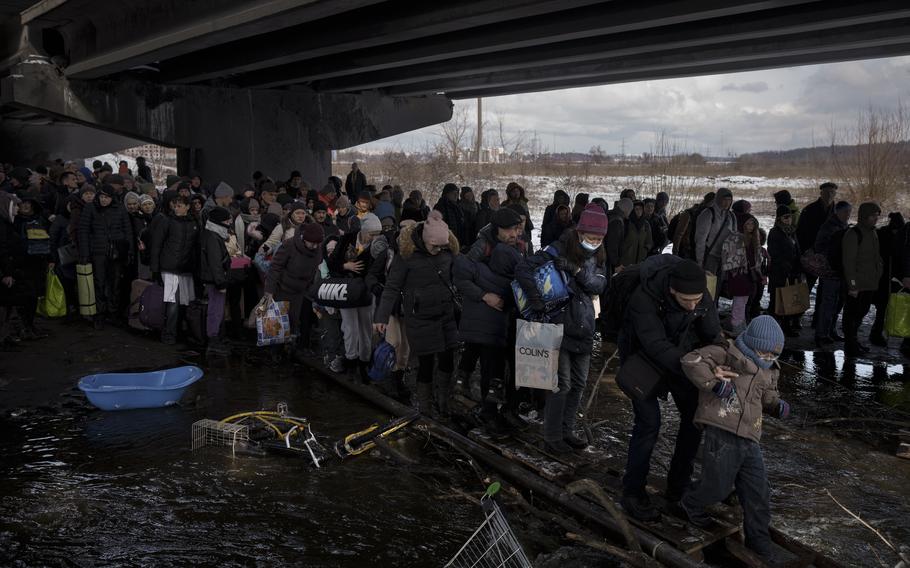 Ukrainians crowd under a destroyed bridge as they try to flee crossing the Irpin river in the outskirts of Kyiv, Ukraine, Tuesday, March 8, 2022. (Felipe Dana/AP)

MARIUPOL, Ukraine — Corpses lie in the streets of Mariupol. Hungry people break into stores in search of food and melt snow for water. Thousands huddle in basements, trembling at the sound of Russian shells pounding this strategic port city.

“Why shouldn’t I cry?” Goma Janna demanded as she wept by the light of an oil lamp below ground, surrounded by women and children. “I want my home, I want my job. I’m so sad about people and about the city, the children.”

A humanitarian crisis is unfolding in this encircled city of 430,000, and Tuesday brought no relief: An attempt to evacuate civilians and deliver badly needed food, water and medicine through a designated safe corridor failed, with Ukrainian officials saying Russian forces had fired on the convoy before it reached the city.

Nearly two weeks into the invasion, the Russians have advanced deep along Ukraine’s coastline in what could establish a land bridge to Crimea, which Moscow seized from Ukraine in 2014. Mariupol, which sits on the Azov Sea, has been surrounded by Russian soldiers for days. 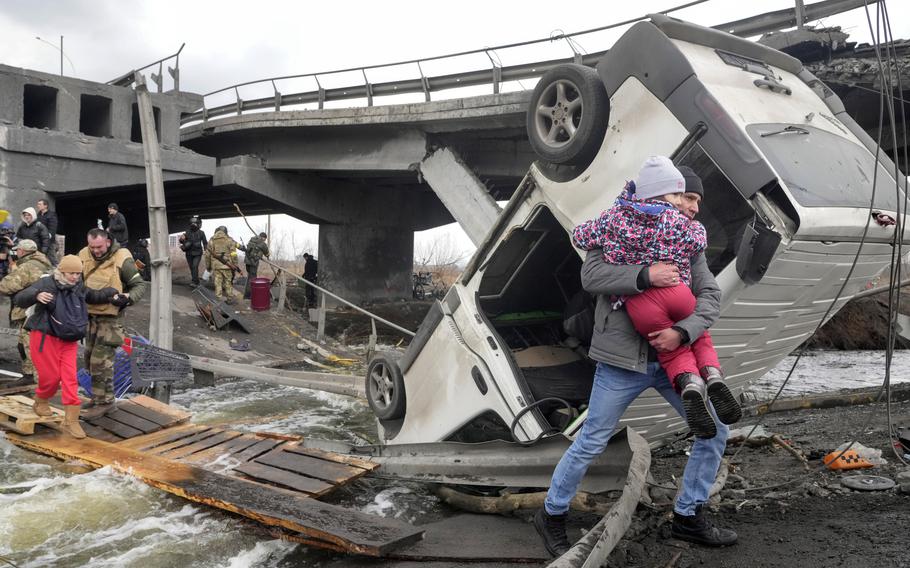 People cross an improvised path under a destroyed bridge while fleeing the town of Irpin close to Kyiv, Ukraine, Monday, March 7, 2022. (Efrem Lukatsky/AP)

In other developments in the Russian invasion:

— Poland offered to give all of its MiG-29 fighter jets to the U.S., apparently agreeing to an arrangement that would allow them to be used by Ukraine’s military. But Pentagon press secretary John Kirby later said the plan is not “tenable” and raises serious concerns for the NATO alliance. He said the U.S. would discuss it further with Poland.

— Russia’s economic isolation deepened as U.S. President Joe Biden announced a ban on Russian oil imports and Shell said it will no longer buy oil and natural gas from the country. Also, Adidas and McDonald’s said they are suspending their operations in Russia.

For days, as Moscow’s forces have laid siege to Ukrainian cities, attempts to create corridors to safely evacuate civilians have stumbled amid continuing fighting and objections to the proposed routes. Ukraine has rejected Moscow’s offers of corridors that lead civilians to Russia or its ally Belarus.

The Russian military has denied firing on convoys and charged that the Ukrainian side is blocking evacuation efforts.

One evacuation did appear successful Tuesday, with Vereshchuk saying that 5,000 civilians, including 1,700 foreign students, had been brought out via a safe corridor from Sumy, an embattled northeastern city of a quarter-million people where overnight strikes killed 21, including two children.

Natalia Mudrenko, the highest-ranking woman at Ukraine’s U.N. Mission, told the Security Council that the people of Mariupol have “been effectively taken hostage,” by the siege. Her voice shook with emotion as she described how a 6-year-old died shortly after her mother was killed by Russian shelling. “She was alone in the last moments of her life,” she said.

Authorities in Mariupol planned to start digging mass graves for all the dead, though the number is unclear. The shelling has shattered buildings, and the city has no water, heat, working sewage systems or phone service.

Theft has become widespread for food, clothes, even furniture, with locals referring to the practice as “getting a discount.” Some residents are reduced to scooping water from streams.

With the electricity out, many people are relying on their car radios for information, picking up news from stations broadcast from areas controlled by Russian forces or Russian-backed separatists.

Ludmila Amelkina, who was walking along an alley strewn with rubble and walls pocked by gunfire, said the destruction had been devastating.

Across the country, thousands are thought to have been killed, both civilians and soldiers, in nearly two weeks of fighting. Russian forces have seen their advances stopped in certain areas — including around Kyiv, the capital, where a vast armored column has been stalled for days — by fiercer resistance than expected from the Ukrainians.

Late Tuesday, Ukrainian President Volodymyr Zelenskyy released a video showing him standing near the presidential offices in Kyiv. Behind him were piles of sandbags, a snow-dusted fir tree and a few cars.

It was the second video in 24 hours showing him near the country’s seat of power, apparently made to dispel any doubts about whether he had fled the city.

Associated Press reporters from around the world contributed to this report.

This story has been updated to correct that buses an official said were part of Mariupol evacuation efforts did not have people on them. It also corrects that the official who spoke about people leaving Irpin was the regional governor, not the deputy prime minister.