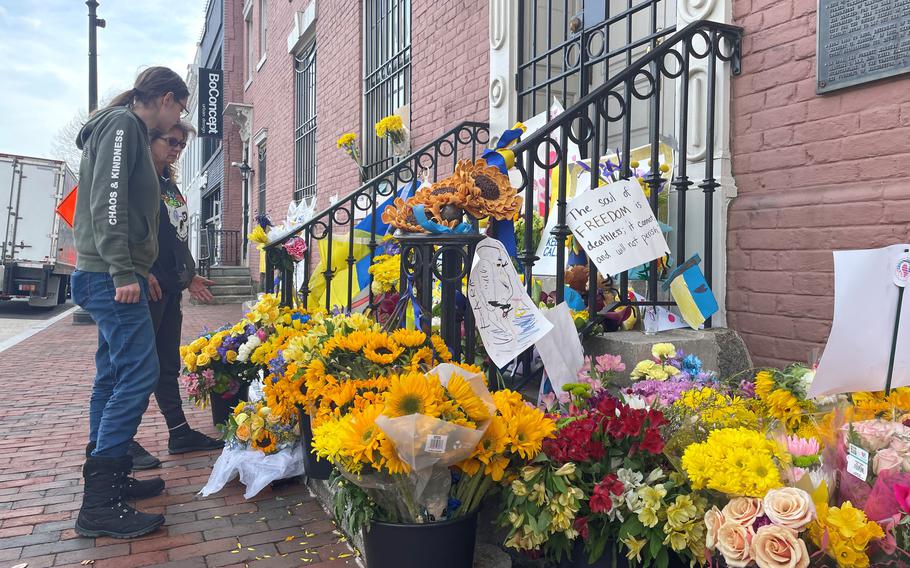 Emily Lowe waits outside the Ukrainian Embassy in Washington as her fiance goes inside to volunteer to join the war. His mother, Sandi Simpson, looks at the flowers next to her. (Petula Dvorak/The Washington Post)

“Oh no, I’m still wearing my Chipotle shirt,” said Diego Presiado, 24, as he stepped through that door, into the Ukrainian Embassy’s lobby in Washington to volunteer.

Presiado, a Marine Corps veteran, was one of four men who showed up at the embassy at 9 a.m. Monday, amped up after a weekend of watching coverage of the Russian attack.

Rarely have we been able to watch a full-scale invasion like this happen in real time. We’ve sent aid, but not troops. We’re laying bouquets, not taking up arms. These guys want to take action. The Ukrainians, after all, invited them to come.

Washington loves political symbolism. From the congressional cafeteria’s rebranded Freedom Fries when France opposed the invasion of Iraq to D.C. Mayor Muriel Bowser’s streetscape mural for Black Lives Matter to the D.C. Council’s renaming of the street in front of the Embassy of Saudi Arabia Jamal Khashoggi Way, symbolic action is one of the things we’re really good at.

Outside the Russian Embassy, someone planted a bootleg street sign declaring that stretch of Wisconsin Avenue the new “President Zelenskyy Way.” The Ukrainian president — an actor with a law degree from Kyiv National Economic University, who once played the president on TV — has won Americans over in his role as a real-life David standing up to Russia’s Goliath.

The streets and sewer system burned with discarded Russian vodka. One vodka tonic into my Friday evening, I joined the social media performances and pronounced Texas-made Tito’s my vodka of choice.

But these guys, the ones showing up by the dozens at the Ukrainian Embassy in Washington? They’re a whole other level of passionate.

“I want to fight for freedom. I’m watching this and it’s just not right,” said Jamal Alkhadi, 31, as he stepped up to the front door of the embassy Monday morning, a little nervous.

This stretch of sidewalk outside the embassy smells like a flower shop there are so many bouquets. Yellow and blue balloons bob in the wind and signs proclaim support for the Ukrainian people, reading “Washington DC stand with FREE UKRAINE,” “The soul of FREEDOM is deathless. It cannot and will not perish,” as well as profanities against Russian President Vladimir Putin.

Akhadi looked at all the signs and took a deep breath. He has zero military experience. He doesn’t know anyone Ukrainian. He works for Door Dash while waiting for his big break in acting. He was the face of a toy called Smakaball and is a regular on a TV show that reenacts kidnappings. He does a lot of work as an extra.

“This is real, though,” he said, before entering the embassy. “I want to help.”

He came back out quickly, though.

“I don’t have military experience,” he said, showing me the paper they handed him, giving him instructions on how he can help. 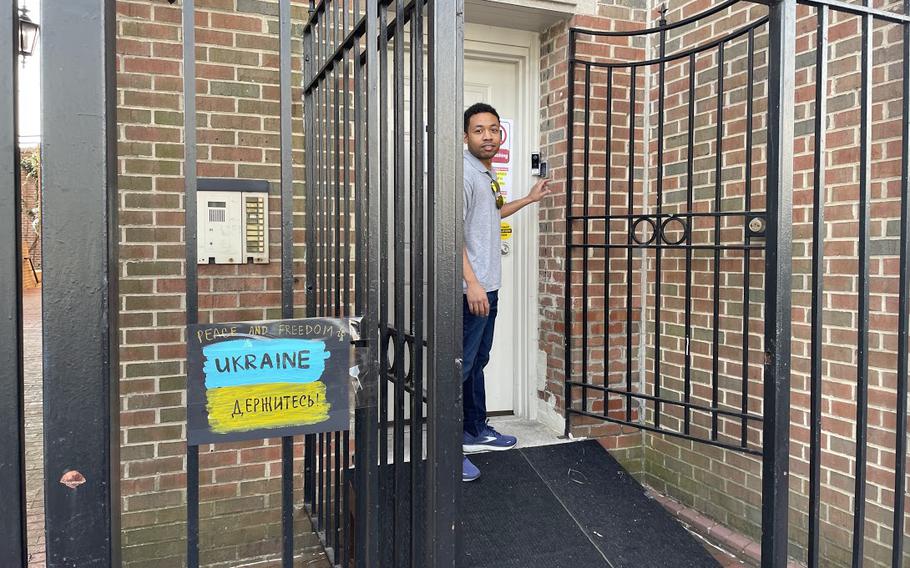 Jamal Alkhaldi a local actor who went to the Ukrainian Embassy in Washington this week. (Petula Dvorak/The Washington Post)

“Foreigners willing to defend Ukraine and world order as part of the International Legions of Territorial Defense of Ukraine, I invite you to contact diplomatic mission of Ukraine in your respective countries,” the statement said, with contact information.

Kevin Dula, 37, also got a thanks-but-no-thanks.

“I did work with Red Cross before, so they said I should go to them,” said Dula, who drove up from Charlotte and walked into the embassy Monday morning. His wife is Ukrainian, and her family is reporting horrors that aren’t being told.

“They really didn’t think it would come to this,” Dula said. “But now they’re bombing and it blew up the power supply. It’s been snowing for two days and they can’t keep warm.”

At least five men have shown up a day lately to the Embassy to volunteer, said D.C. police officers stationed outside, who saw that many on Monday morning alone.

A clear picture of what’s happening in Ukraine is difficult to come by. A United Nations monitor said there have been at least 360 civilian deaths, 760 injuries and at least a million citizens have fled the nation after more than a week of shelling, calling it the “fastest-growing refugee crisis in Europe since World War II.”

The situation is devolving, but it’s worth noting that atrocities committed in South Sudan, Syria, Myanmar, Somalia and more didn’t move American men to offer their lives up in this way, for a people they don’t know. Perhaps it’s because, as a former Ukrainian prosecutor allegedly said in an interview, that the world is watching “European people with blue eyes and blonde hair being killed.”

As Emily Lowe looked at all those bouquets, full of yellow sunflowers and blue irises, on Monday, she thought of the wedding she was supposed to have last weekend. Instead of honeymooning, she was outside the Ukrainian Embassy after driving 430 miles from their home in New Hampshire.

“As soon as he heard what was going on, he said he wanted to join,” said Lowe, who is 19 and works at a bank in their lakefront town. They decided to cancel their small wedding and come to D.C., to say goodbye before he heads to a country he’s never visited.

Her future mother-in-law traveled with her, proud that her son, a construction worker with no military experience, wants to fight. They’re figuring he’ll be of use to the Ukrainian army, with his strength and familiarity with the military — just about every man in his family served.

“I raised him to be a man,” said Sandi Simpson, 53. She picked up a sign that suggested a profanity be done to Putin and waved it around. “They’ve gotta get rid of him.”

We’re watching everyday Ukrainians stand up to a tyrant, a scrappy underdog take on a bully. This is an old rivalry for our young nation, and we’ve been invited to help.

It’s no wonder that amid the divisiveness and confusion of our own political climate, where truckers are currently circling the Beltway in protest of pandemic-era mandates that largely no longer exist, people are reaching for a way to just be heroes again.

“The last week has been really intense,” Emily said. “But we decided that this is the morally right thing to do.”