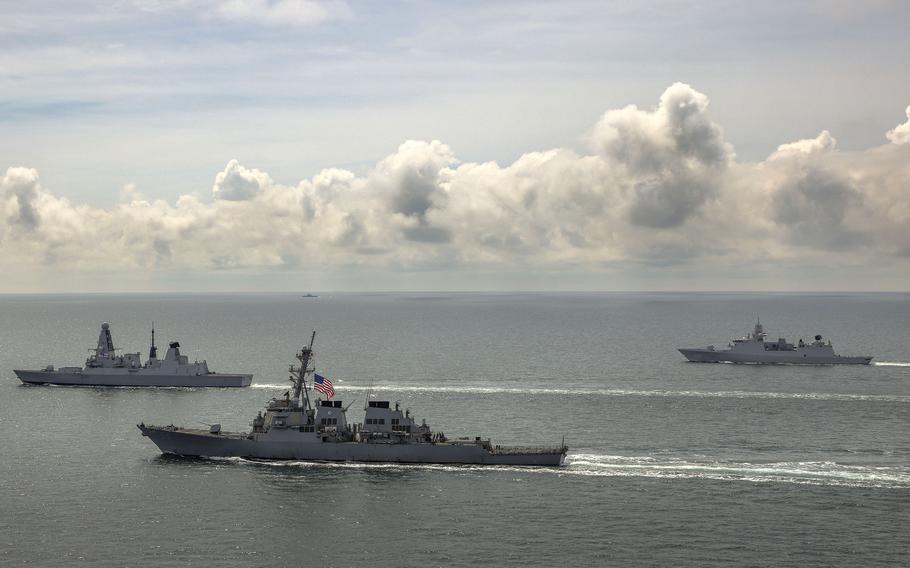 The destroyer USS Laboon, center, the U.K. Royal Navy's HMS Defender, left, and the Dutch HMNLS Evertsen sail together as a Russian warship watches from afar in the Black Sea in June 2021. (Dan Rosenbaum/U.K. Royal Navy)

NAPLES, Italy — NATO activity in the Black Sea region has become less frequent since Moscow’s takeover of the Crimean Peninsula nearly eight years ago, sparking concerns that the West is falling short in checking further Russian ambitions in the strategically critical waterway.

A Stars and Stripes analysis of the data revealed that despite NATO rhetoric about a stepped-up presence in the Black Sea, the trend has gone in the opposite direction.

The U.S. Navy has shouldered most of the burden for patrolling the Black Sea. The number of days its warships spend annually in the strategic waterway mostly has fallen since 2014, when Kremlin forces seized Crimea from Ukraine.

The area could soon become a flashpoint again as Russian ships transit eastward through the Mediterranean Sea, while its forces on land surround Ukraine.

“(With) the Black Sea specifically, so much of deterrence and dealing with other nations geopolitically has do with presence,” said Jim Townsend, a fellow at the Center for a New American Security in Washington and a former Defense Department undersecretary for European and NATO policy. “If you’re not there one way or another, then the assumption is you don’t care about it.”

U.S. ships spent about 210 collective days in the sea in 2014, a Stars and Stripes analysis of data from the Istanbul-based ship-watching website Turkishnavy.net found. Two years later, that number was about 58 days.

Stars and Stripes compared the U.S. ship data with Navy press releases and news reports, finding rare variances of a day or two.

U.S. warships had not spent more than about 126 days in the sea annually since 2016 until last year, when tensions rose along the Ukrainian-Russian border.

In 2021, about 12 Navy ships, including the U.S. 6th Fleet flagship Mount Whitney, spent some 182 collective days in the Black Sea. That’s still 15% less time than they spent there seven years earlier.

The Black Sea falls under the operations area of U.S. 6th Fleet, which did not respond to a request for comment after being sent the data. 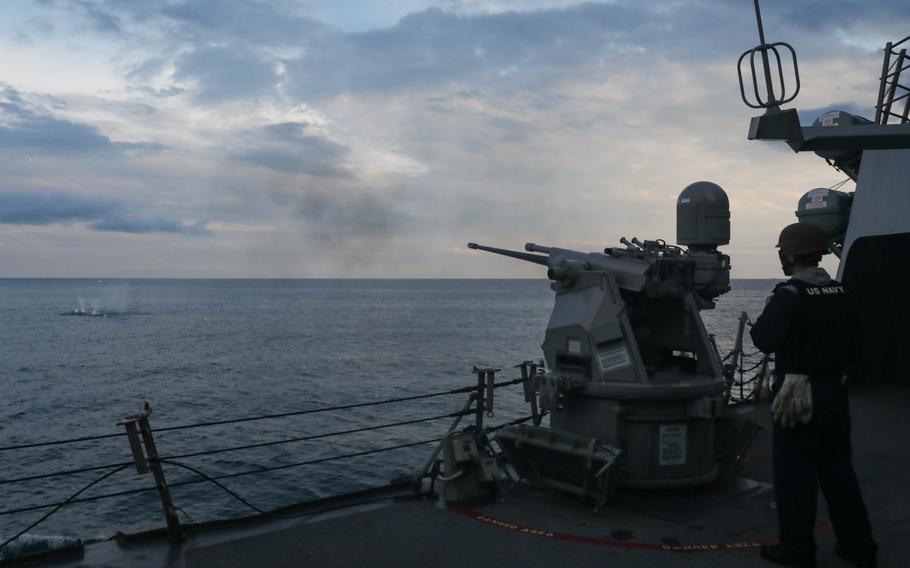 Sailors aboard the USS Ross fire a 25mm machine gun during a multinational exercise hosted by U.S. 6th Fleet and the Ukrainian navy in the Black Sea, July 7, 2021. (Claire DuBois/U.S. Navy) 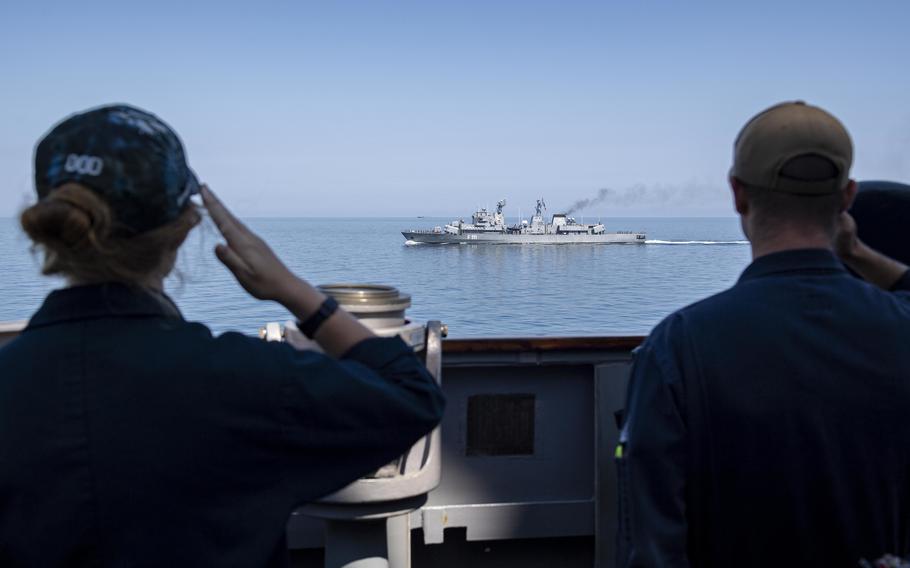 Sailors assigned to the destroyer USS Laboon salute as Laboon renders honors to the Romanian navy frigate ROS Marasesti during a passing and communication exercise in the Black Sea, June 23, 2021. (Jeremy Boan/U.S. Navy) 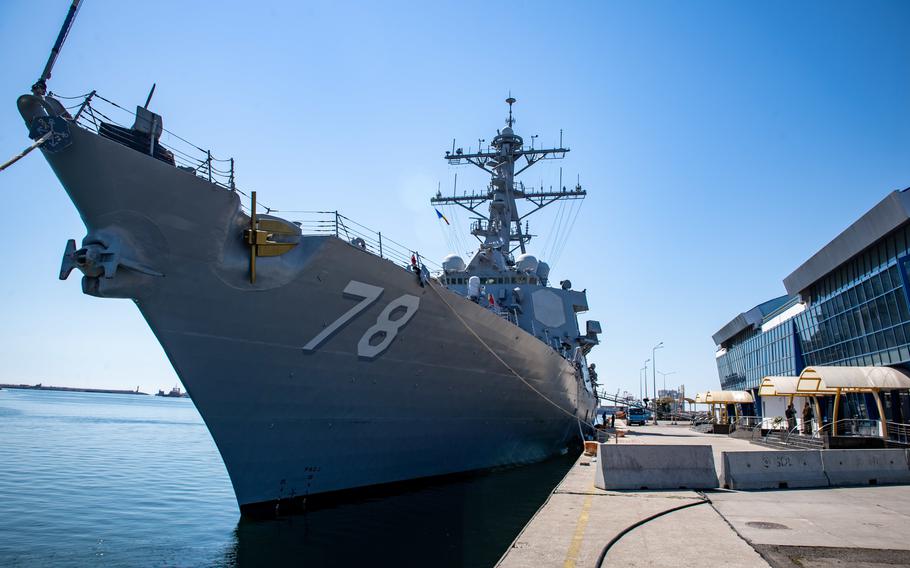 The destroyer USS Porter is moored at the Romanian Black Sea port city of Constanta, Aug. 12, 2019. The U.S. has spent the most time patrolling the Black Sea among its NATO allies, but overall presence has dropped since 2014, according to a Stars and Stripes data analysis. (U.S. Navy)

In a Nov. 25 news release announcing that the destroyer USS Arleigh Burke was entering the Black Sea, 6th Fleet said the ship’s patrol would “ensure security and stability in this vital international waterway.”

The Arleigh Burke spent about 21 days in the sea and made port calls in Constanta, Romania, and Varna, Bulgaria. Both countries are NATO members.

Representation from a few other NATO countries has picked up in recent years but has been inconsistent. Alliance members Germany, Poland and Netherlands made intermittent Black Sea patrols from 2014 to 2021, the data show.

Retired Adm. James G. Foggo III, who led U.S. Naval Forces Europe-Africa and Allied Joint Forces Command Naples from 2017-2020, said that it was frustrating to see wavering allied presence in the Black Sea, “depending on what crisis or what tension is building up in any given (situation).”

The inconsistency is driven by competing security priorities among allies, a lack of available ships and resources, and the failure of NATO to devise and implement a strategy in the Black Sea, Foggo said.

The result is an emboldened Russian President Vladimir Putin, who is orchestrating a stranglehold on Ukrainian ship traffic in the adjoining Sea of Azov and harassment of NATO ships in the Black Sea, said Foggo, now dean of the Arlington, Va.-based Center for Maritime Strategy.

He and other analysts say that regardless of the outcome of the current situation in Ukraine, the U.S. must take the lead in developing a NATO Black Sea strategy.

They advocate a nearly constant patrol presence in the sea, an increase in the number of surveillance operations and assistance to Ukraine in building up its naval capacity and capabilities.

However, the burden for funding and implementing a strategy should not fall primarily to the U.S., said James R. Holmes, a professor at the Naval War College in Newport, R.I. 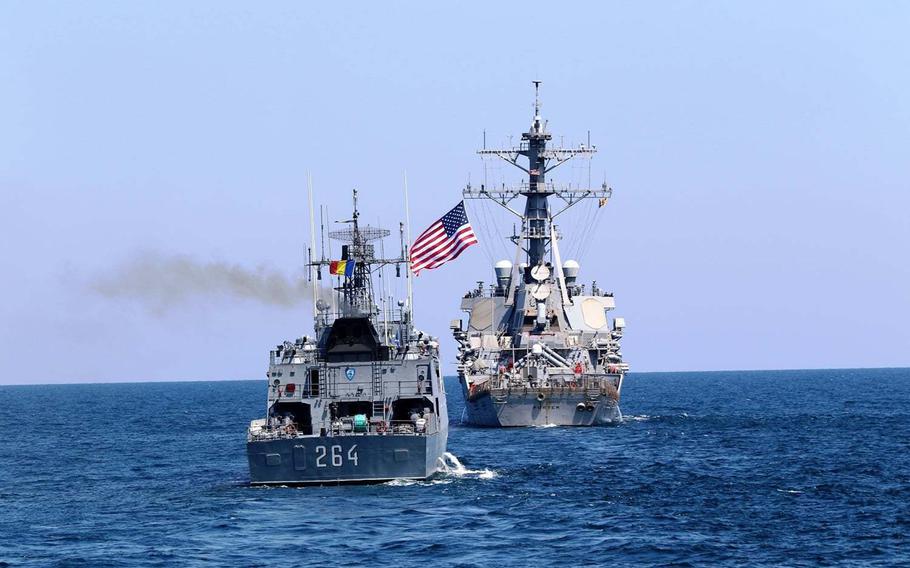 A Romanian ship and the USS Porter sail together in the Black Sea during Exercise Sea Breeze 2020, hosted by the U.S. and Ukraine. The U.S. has spent the most time patrolling the Black Sea among its NATO allies, but overall presence has dropped since 2014, according to a Stars and Stripes data analysis. (Ukraine ministry of defense)

“It's time for Europeans to turn those resources into diplomatic and military influence rather than continue depending on us to guarantee the region's security,” Holmes said. “We need to become an alliance of equals.”

Greece and France each made three Black Sea visits last year, and Germany appears to have sent none of its ships to the sea in 2021. One German warship did spend 11 days in the sea in 2020, the data show.

Increasing presence would require creative thinking, Luke Coffey and Brent Sadler wrote in a May report from the Washington D.C.-based conservative think tank The Heritage Foundation, which relied in part on the same data.

NATO and its non-Black Sea members should “invest in and help develop the maritime capabilities of the alliance’s Black Sea littoral states, such as Bulgaria, Romania and Turkey, along with NATO partners Georgia and Ukraine,” they wrote.

They also recommended exploring ways to circumvent various restrictions on warships in the sea.

Russia’s demands that U.S. and NATO troops leave the countries that once formed the Cold War-era Warsaw Pact have several nations on the Black Sea concerned about Moscow’s intentions, particularly in light of Russia’s massive military buildup along Ukraine’s borders.

That is why it would be a mistake ever to ignore Russia, even while much of the U.S. security establishment has focused on China in recent years, analysts said.

“We are never going to be able to just turn our back,” Foggo said. “(The Russians) are always going to be there.”