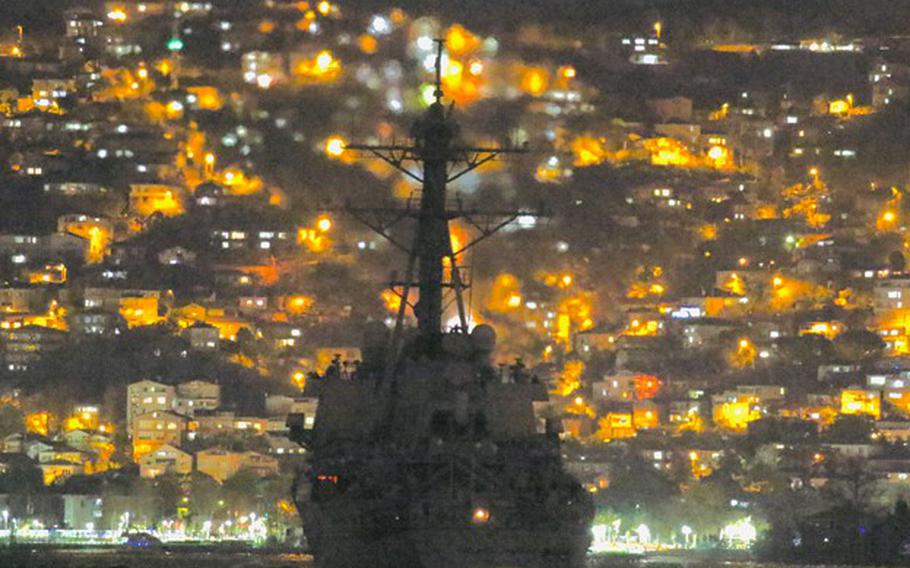 The USS Arleigh Burke transits the Bosporus near Istanbul, Turkey, Nov. 25, 2021. The destroyer entered the Black Sea, where the Navy said it will operate alongside NATO allies and partners in the region. (Yoruk Isik/Twitter)

NAPLES, Italy — Another U.S. warship has sailed into the Black Sea, again drawing intense Kremlin scrutiny amid continued concerns about a potential Russian invasion of Ukraine.

The destroyer USS Arleigh Burke entered the sea via the Bosporus Strait on Thursday for a routine patrol in support of NATO allies and partners, U.S. 6th Fleet said in a statement.

A Russian troop buildup near its shared border with Ukraine is stoking fears that Moscow could be planning to invade and annex more Ukrainian territory, as it did the Crimean Peninsula in 2014. Most of the international community does not recognize Russia’s claim to Crimea.

“Now, more than ever, we stand firmly alongside our NATO allies and partners in the Black Sea region,” said Cmdr. Patrick Chapman, commanding officer of USS Arleigh Burke. 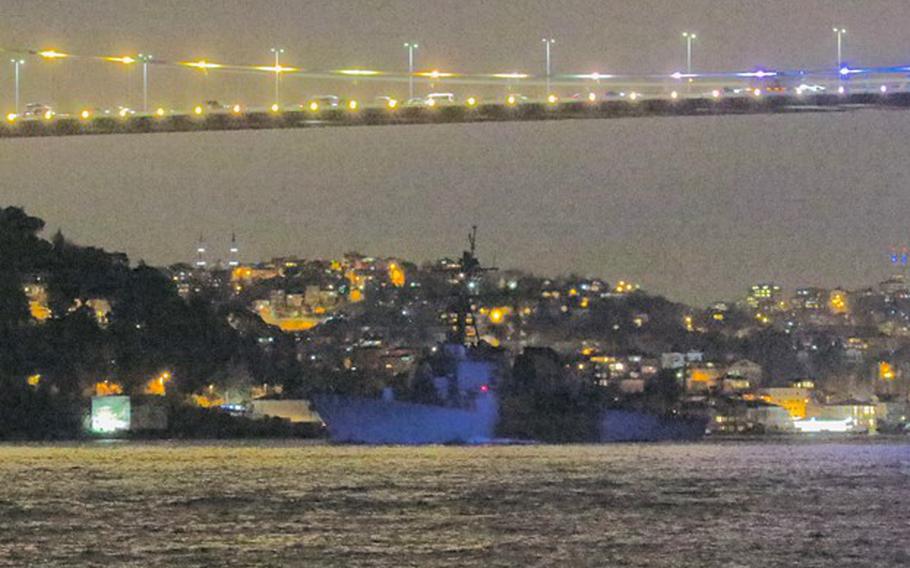 The USS Arleigh Burke transits the Bosporus near Istanbul, Turkey, Nov. 25, 2021. The destroyer entered the Black Sea, where the Navy said it will operate alongside NATO allies and partners in the region. (Yoruk Isik/Twitter)

Russia, which frequently bristles at U.S. ships coming into the Black Sea, described the patrols as destabilizing and provocative. Its military was monitoring the Arleigh Burke’s movements, the Russian state news agency TASS reported Thursday.

Arleigh Burke’s patrol in the Black Sea follows that of the destroyer USS Porter, which left earlier this month after more than two weeks in the region. The command ship USS Mount Whitney also departed mid-month after spending about 11 days in the Black Sea participating in exercises with Georgia, Romania, Bulgaria, Turkey and Ukraine.

Both ships drew significant Russian attention and commentary, although the Kremlin likely knew about U.S. intentions at least two weeks before the Navy entered the sea. Warships of non-Black Sea countries that intend to transit via the straits connecting the Mediterranean Sea and the Black Sea are required to give at least 15 days’ notice to Turkey.

The 1936 Montreux Convention regarding regulating movements through the straits also limits the number of such warships in the Black Sea any given time.