Amid fears Russia will invade Ukraine, Putin points finger at US and NATO in marathon news conference

by
Isabelle Khurshudyan and Mary Ilyushina
• The Washington Post • December 23, 2021 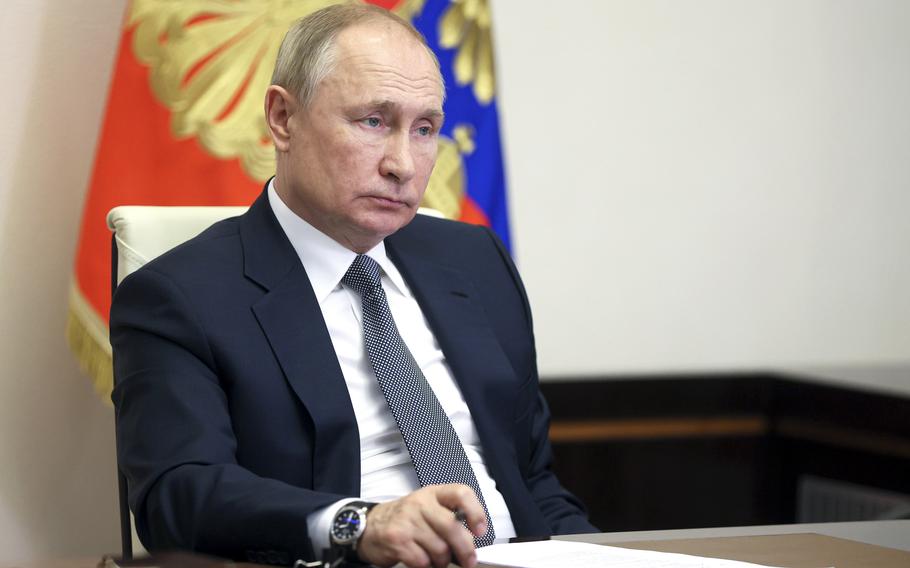 Russian President Vladimir Putin attends a meeting with members of the Presidential Council for Strategic Development and National Projects via teleconference at the Novo-Ogaryovo residence outside Moscow, Russia, Wednesday, Dec. 15, 2021. (Mikhail Metzel/AP)

MOSCOW — In an annual, marathon news conference Thursday, Russian President Vladimir Putin, facing a television audience across Russia, said the West was to blame for tensions on the Ukraine border and fears of war.

Russia has massed some 100,000 troops, along with military hardware, on its border with Ukraine, preparing what Western officials have warned could be a full-scale attack on its southwestern neighbor. In one of Putin’s highest-profile, public-facing events of the year, an opportunity to sway his domestic audience, Putin said Russia would rather not fight a war, and doubled down on his claim that Russia is facing a threat from the West — and not the other way around.

He was twice given the opportunity to state his military intentions toward Ukraine. He did not say definitively that Russia would not invade. He instead reiterated his demand for a promise in writing that NATO would not seek to expand eastward.

“We need to think about how Russia is going to live,” he added, ominously. “Are we supposed to always look behind our shoulder and wait?”

Russia’s Foreign Ministry last week published sweeping demands it presented to the United States and NATO that would effectively bar all other former Soviet republics — including Ukraine — from joining or cooperating with the alliance.

Putin described the U.S. response to its proposals — what Moscow refers to as “security guarantees” — as “positive.” He added that he expects negotiations with a White House delegation about Ukraine and NATO expansion to take place in Geneva next month.

“Not Russia but the West should give guarantees - and immediately, now, rather than bury it for decades, and under the soft talk about the need for security for all to do what they planned,” Putin said. “Are we threatening anyone?”

Russia’s demands to the United States and NATO have raised worries among analysts that Moscow is making requests that it knows are nonstarters, seeking to send a message domestically and to create a pretext for possible military action once those demands are spurned.

The annual news conference typically has a circuslike atmosphere, and Thursday was no exception. State television channels start a countdown days in advance, and journalists from across the country pack a Moscow hall with signs and costumes to grab Putin’s attention, so he’ll call on them for questions.

As a pandemic precaution, the Kremlin invited fewer journalists than usual — around 500 — from Russian and foreign media outlets. Those in attendance had to take three PCR tests in advance and pass through a disinfection tunnel upon arrival. Seats inside the hall were spaced out — and bolted down — to enforce social distancing.

As always, Putin held forth for hours on end, beginning with an hour focused on the economy, before veering to questions on tension with Ukraine and a range of other topics.

His comments Thursday were slightly less bellicose than remarks he made earlier in the week. He told senior officers at the Russian Defense Ministry Tuesday that Moscow will take “military-technical response measures and react harshly to unfriendly steps.”

He previously complained that the United States and its allies supply Kyiv with lethal weapons, conduct “provocative” military exercises in the Black Sea and fly strategic bombers just 12 miles from Russia’s borders. Washington has provided Kyiv with $2.5 billion in defensive military assistance since 2014, when Russia annexed Crimea from Ukraine.

Putin has repeatedly warned against stationing missile defense systems in Ukraine similar to those in Romania and Poland, claiming that they could be secret offensive weapons capable of reaching Moscow within 10 minutes.

“Do we put our missiles close to U.S. borders?” he asked Thursday. “No! It’s the U.S. which has come to our house with its missiles, they’re on our doorstep already!”

Fyodor Lukyanov, a foreign-policy analyst who advises the Kremlin, said Moscow’s demands to NATO could just be a starting point for a deeper negotiation.

“Certainly, some of the points in this composition are practically unimplementable,” Lukyanov said. “But if we believe that this is something like a new version of classical diplomacy where the radical positions are put on the table at the beginning and then some kind of bargaining begins — whatever the sides are saying now — then probably we can expect some kind of attempt at least to have a conversation.”

While Putin’s move to invade and then annex the Crimean Peninsula was ultimately hugely popular among Russians, analysts say there is no popular support for war now. People here are weary of new sanctions, which the United States warned will be “unprecedented”, if Russia takes military action against Ukraine.

But the Kremlin’s messaging on the tensions with Kyiv appears to be working. Half of the Russians surveyed in a recent poll by the independent Levada Center blamed the United States and other NATO countries for the escalation.

“If he will see that some part of Russians are against it, he will just double down on convincing them that it’s for them and it’s necessary,” said Tatiana Stanovaya, the head of the R. Politik think tank.

“But Putin’s regime now functions in such a way that no one can really question Putin’s visions and decisions,” she added. “As Putin doesn’t stand any critics and he doesn’t stand any questioning of his policy, he tends to make decisions that are sometimes emotional and much more subjective and questionable.”