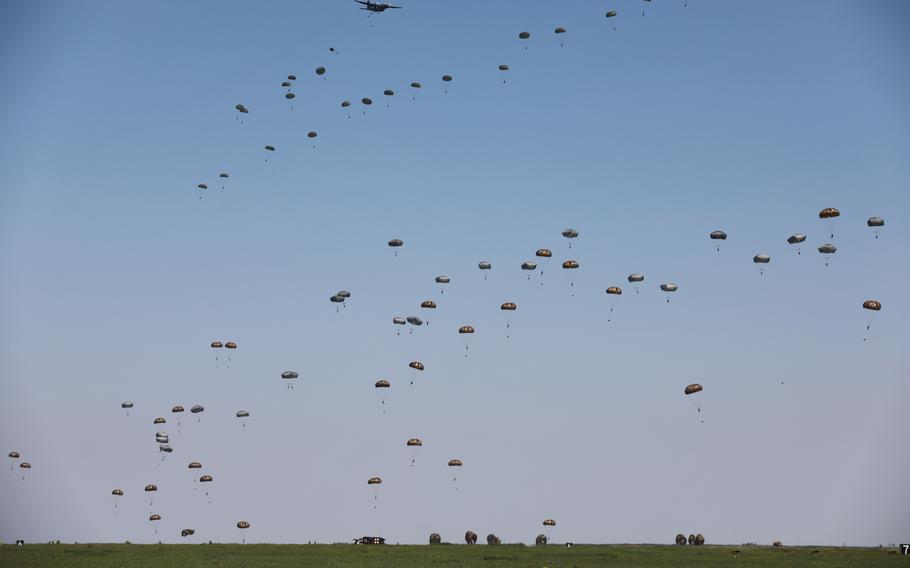 Paratroopers with the 82nd Airborne Division execute a jump during exercise Defender-Europe 21 at Boboc Air Base, Romania, on May 10, 2021. (Jabari Clyburn/U.S. Army)

U.S. paratroopers landing in the Baltics, Army cavalry and artillerymen convoying in from Germany and an armored brigade massing its forces.

Those are some of the moves U.S. European Command could make to shore up NATO’s eastern flank if Russia invades Ukraine, analysts say.

There also will be pressure on NATO to activate its little-used quick reaction spearhead force, a unit created in response to Russia’s 2014 intervention in Ukraine, to showcase allied unity.

“This (NATO) force was built for just this kind of crisis,” said John R. Deni, a European security expert at the U.S. Army War College. “It’s a force representative of many of the allies. So to not use it now, frankly, risks undermining NATO solidarity.” 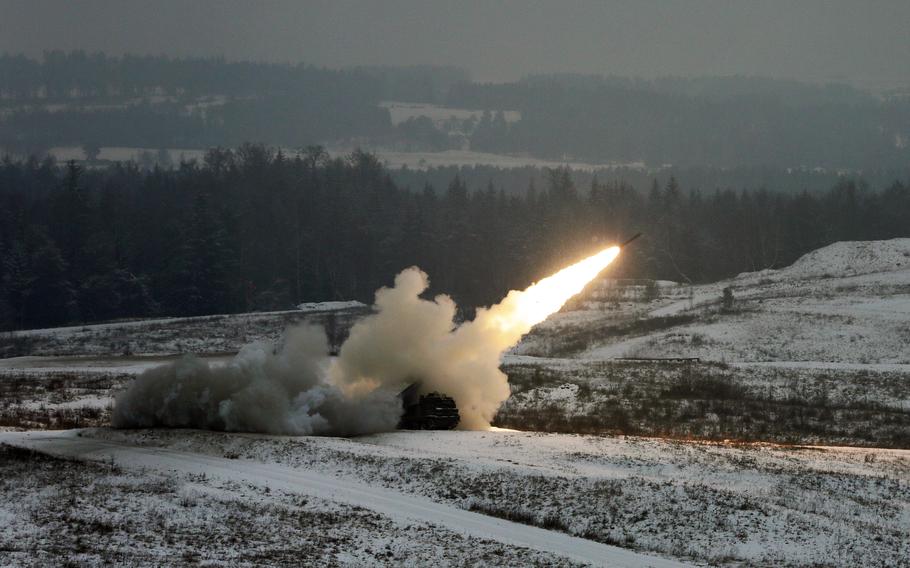 While it’s not certain whether Russian President Vladimir Putin will launch a new invasion of Ukraine, what has become clear is that there will be an allied military response of some form within NATO territory if an attack does occur.

U.S. national security adviser Jake Sullivan, speaking Tuesday after a meeting between Putin and his American counterpart, Joe Biden, said the U.S. is ready to fortify its NATO allies on the eastern flank.

“What additional capabilities can we provide to ensure that they feel strong and confident in their own sovereignty and territorial integrity?” Sullivan said.

He didn’t specify what the additional capabilities are, but he said they are “on the table in those countries should Russia move in Ukraine in a more decisive way.”

The question now is what types of military maneuvering could come into play if the U.S.-led NATO alliance must boost defenses in Estonia, Lithuania, Latvia and Poland and Romania.

Retired Gen. Philip Breedlove, who commanded EUCOM and served as NATO’s supreme allied commander from 2013-16, said the alliance is better-positioned now to respond to a crisis than it was in 2014, when Moscow suddenly annexed Ukraine’s Crimean Peninsula.

“The bottom line is we made some good changes to NATO, and we need to continue to finish what we started,” said Breedlove.

He declined to offer a prescription on how exactly U.S. and allied forces should be mobilized if another invasion of Ukraine occurs. But he did say “a change in readiness is called for.”

EUCOM’s initial response to Russia’s 2014 intervention in Ukraine offers an indication of what it might do a second time around, notably, enhancing air policing in the Baltics with Air Force F-16s and parachuting 173rd Airborne Brigade soldiers into Poland and the Baltics.

Subsequent high-profile road convoys by the 2nd Cavalry Regiment, based in Vilseck, Germany, also were part of the Army’s response then.

Deni said similar moves should be expected if allies need to respond once again.  But unlike the case seven years ago, the U.S. military is no longer in decline on the Continent, giving EUCOM more forces to choose from.

“Certainly, we didn’t have everything we needed (in 2014),” Breedlove said. “Thankfully, since those days, our forces have only grown in Europe, so that is a good thing.”

For example, in 2014, there were no Army tanks left in Europe. The last of the Army’s M-1 Abrams main battle tanks departed Germany exactly one year before Russia’s annexation of Crimea.

EUCOM also could elect to mass armored forces, which are often dispersed along the eastern flank, into the Baltics if it wanted to fortify defenses in a reassurance move, Deni said.

In addition, the Army has added aviation capabilities and brought in new artillery units, which are based in Germany, that could be sent to the Baltics and Poland on assurance missions.

A new Multi-Domain Task Force at U.S. Army Europe and Africa’s headquarters, launched in September, also could factor into reinforcement plans in the east, Deni said.

The unit is intended to tie together unconventional warfighting capabilities in the electronic realm.

One area of uncertainty is how much more NATO member states will be willing to do. The alliance already has four multinational battlegroups in the Baltics and Poland that were formed to serve as a deterrent to Russian aggression.

Those units would likely be on heightened alert in the event of an attack on Ukraine.

Bringing in that unit, which consists of forces from allied countries, would highlight alliance unity.

“All this will be predicated on a request from allies. If we see them going to NATO and asking for assistance and not getting it in a timely fashion, I think we will see the U.S. act bilaterally,” Deni said. “I sense (the Baltic states and Poland ) want more American boots on the ground, period. I strongly suspect that desire will grow, not diminish.”

However, it’s not clear whether all allies would be on board, analysts said.

“The main problem seems to be that once again, some NATO allies have a different threat perception about Russia and a reluctance to stand up to Putin,” said Jorge Benitez, a NATO expert at the Atlantic Council think tank in Washington.

In Ukraine itself, U.S. National Guard troops and special operations teams are stationed on a training mission. They are positioned far from the ongoing conflict with Russia-backed separatists in the country’s east.

And there is no sign the Pentagon wants to add trainers. Such a move could be seen as escalatory by Russia.

But on Tuesday, Sullivan said Washington is ready to provide additional defensive materiel to Ukrainians beyond the $2.5 billion in security assistance given since 2014.

“We have an ongoing pipeline that delivers various forms of defensive assistance to Ukraine,” Sullivan said. “Whether that pipeline needs additional supplements as we go forward will depend on how circumstances evolve.”