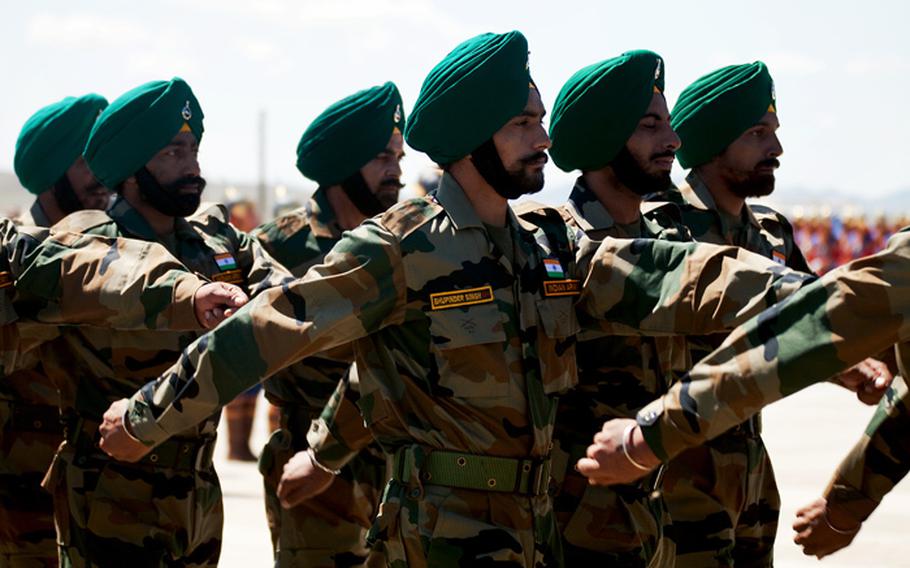 In each battle, Sikh soldiers fought without helmets.

For two centuries, Sikhs have been renowned in the British Empire and later, in independent India, for their fighting prowess and their custom of entering battle in their distinctive headdress. Many Sikhs view keeping long, unshorn hair wrapped in a turban as part of their religion's Five Kakars, or sacred markers of identity, and for decades, Sikhs around the world have resisted pressure by governments for them to don helmets, whether to serve in combat or to ride motorcycles.

Now, a plan by the Indian army to purchase 12,730 ballistic helmets designed specially for Sikhs has drawn criticism from the topmost religious leaders in Sikhism, sparking the latest debate for a community that has long tried to navigate the dueling mandates of its religion and secular authorities.

Typically, Sikh men cover their hair with a thin undercloth called patka before tying it in a knot on top of their heads. The 5-to-8-meter-long turban, or pagh, is wrapped over the patka. The practice is said to be one of the commandments handed down by Guru Nanak, the founder of Sikhism, who lived between 1469 and 1539.

The Indian army's new helmet, dubbed Veer, or gallant in Hindi, would be worn on top of the patka but replace the turban. The helmet has a bulge to accommodate a Sikh soldier's topknot, and its designers say it would offer protection against small-arms fire and be compatible with mounted night vision goggles, cameras and communication systems that Sikh soldiers previously could not use with their turbans.

But in a statement Jan. 12, the Shiromani Gurdwara Parbandhak Committee, the foremost religious authority in Sikhism, wrote to Indian Defense Minister Rajnath Singh asking that the helmet procurement plan be withdrawn. The turban is a sacrosanct symbol of Sikh heritage, committee president Harjinder Singh Dhami wrote.

"Ordering a Sikh soldier to take off his turban and wear a helmet just because it offers better protection to his head, is ignorance to the Sikh's psyche," Dhami said in the statement, which listed historical battles in which Sikhs had fought without helmets.

The controversy in India mirrors similar debates in the West, home to a vast Sikh diaspora. Until recently, the U.S. Marine Corps prohibited Sikhs from starting basic training unless they shaved their beards. Beards, which are also part of the sacred Sikh markers, interfered with wearing gas masks, the Marine Corps said.

After the ban was challenged by a Sikh American advocacy group in court, it was overturned by a federal judge in December. The Marines are reportedly considering an appeal.

Former Canadian Defense Minister Harjit Singh Sajjan, a Sikh veteran who served in Bosnia and Afghanistan, has said he tried making his own gas mask so it would work with his beard during his time as a soldier.

In the civilian realm, the issue of whether Sikhs must wear helmets has also been debated. While Sikhs are exempt from helmet requirements to ride motorcycles in countries including India and Canada, German courts have ruled that Sikhs must wear the head protection. Australia, another country with a large Sikh population, also requires helmets for bikers, prompting protests by Sikh groups.

The debate in India has been especially sensitive because Sikhs make up a large part of the army and comprise some of its most storied combat units, including the Sikh Regiment, the Sikh Light Infantry and the Punjab Regiment.

Men from the Indian state of Punjab, which is majority Sikh, make up 8 percent of the army even though Punjab accounts for just 2.5 percent of India's population. In many Sikh families, military service is a point of pride and tradition. That legacy is so entrenched that when filmmakers produced a Bollywood remake last year of "Forrest Gump" and wanted an Indian equivalent for the character played by Tom Hanks, they devised a Punjabi Sikh protagonist (portrayed by Aamir Khan) who came from a military family.

Kusumesh Mishra, an engineer at the defense firm MKU and the Veer's designer, said he got the idea for the helmet after his company met with a Sikh soldier who lamented the lack of appropriate headgear.

"You have helmets for everyone but not us," Mishra recalled the Sikh soldier telling company executives. Last year, Mishra interviewed more than a dozen Sikhs to gauge their reaction to the helmet and tested it with Sikh soldiers in extreme cold in Ladakh, the Himalayan territory near India's tense borders with China and Pakistan, he said.

"It's very disheartening to see this," Mishra said about the controversy. Those objecting to the helmet "don't even know what the helmet looks like or how it was made."

It is unclear whether the Indian Army, which has remained silent on the pushback from Sikh religious leaders, will force through the use of the new helmet. In recent years, the military has faced intense resistance to initiatives such as a budget-cutting scheme to release recruits after four years of service but enacted them anyway. (Many in India have traditionally viewed military service as secure, lifetime employment that also elevates one's social status.)

Some Sikh veterans have come to the army's defense, calling their religious elders' thinking impractical.

"Will Pakistan give a [pledge] that their snipers will stop targeting our Sikh troops if they wear turbans?" asked retired Lt. Gen. K.J. Singh, referring to India's neighboring archenemy. Singh, whose four-decade service record included a stint with United Nations peacekeeping forces, said Sikh traditions faced bigger threats in the modern world, such as growing numbers of young village men who opt to cut their hair as a fashion choice.

"Start with all these singers and actors who have cut their hair," he said with a sigh.