Sikh recruits had to choose between Marines and beards — until now 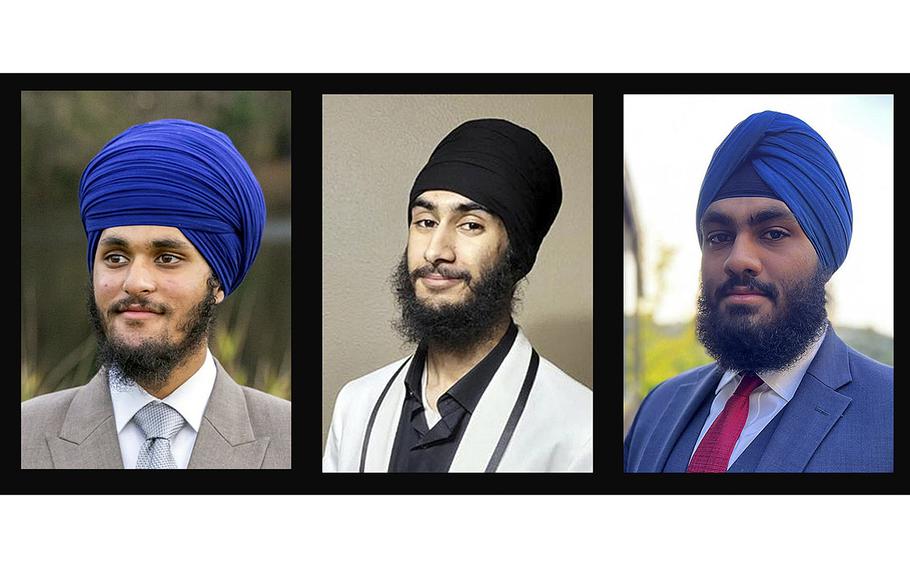 From left: Sikhs Milaap Singh Chahal, Jaskirat Singh and Aekash Singh in August 2022 requested to enter Marine boot camp without shaving their beards or meeting other grooming requirements on religious grounds. An appeals court ruled Friday, Dec. 23, that the Marine Corps cannot force Sikh recruits to against their religious beliefs by shaving their beards. (Sikh Coalition)

The U.S. Marines cannot force Sikh recruits to go against their religious beliefs by shaving their beards, a federal appeals court ruled Friday.

"They are now suffering and will continue to suffer grave, immediate, and ongoing injuries to the exercise of their faith," the unanimous panel for the U.S. Court of Appeals for the D.C. Circuit wrote in ordering an injunction against the policy.

Three Sikh men hoping to go through boot camp challenged the policy in federal court this year, along with a captain who wants to be able to serve with a beard in combat zones. While their lawsuit is ongoing, the order requires the Marines to accommodate them now so they can begin training.

"Today's ruling is a major victory for these Sikh recruits, who can now begin basic training without having to forfeit their religious beliefs," Eric Baxter, who represented the plaintiffs, said in a statement. "It is also a victory for our nation, as three brave and dedicated men will soon serve our nation with valor in the Marine Corps."

Baxter is senior counsel at Becket Law, the nonprofit firm behind Supreme Court decisions allowing corporations to not cover birth control and a foster-care organization to refuse to work with same-sex couples. Though founded by conservative Catholics and often advocates for exceptions to anti-discrimination laws, the organization has also defended the rights of religious minorities.

The Marines' ban on facial hair applies in basic training and "combat zones," a designation the plaintiffs said in court covers over three dozen countries where hazard pay is given.

Officials defended the policy as necessary for the uniformity and discipline required to become a Marine and serve as one in dangerous situations. Col. Adam Jeppe, who is in charge of such policies, told the court in a declaration that Marine recruits are "stripped of their individuality in order to … function as a team." He added, "everyone desiring to be a Marine often must be willing to give up something to accept uniformity and what it means. This common sacrifice contributes to the forging of unit cohesion."

But at oral argument last month, Justice Department attorneys struggled to explain why a religiously mandated beard would threaten that cohesion while other accommodations do not. The Marines this year created a facial hair exemption for recruits who suffer from a painful inflammatory reaction to hair removal and offered more latitude for women with long hair. The military branch also recently relaxed its rules on visible tattoos.

"How can it be the least restrictive means when there are other widespread exemptions?" Judge Neomi Rao asked.

And the Marines are part of the Navy, whose academy allows Sikh recruits to keep their beards in basic training. The Air Force and Army do as well.

"Other branches of the military have rapid deployment forces as well," Judge Patricia Millett said at argument. "When the Marines go off on their missions, who takes them? The Navy, which makes accommodations."

"It seems like these are goals, versus kind of some evidence-based theories," she said.

The court did not address limitations on service for bearded Marines who have completed the 13-week boot camp, saying it was not relevant to the emergency appeal.

"No one in boot camp is deploying on a military expedition," they wrote.