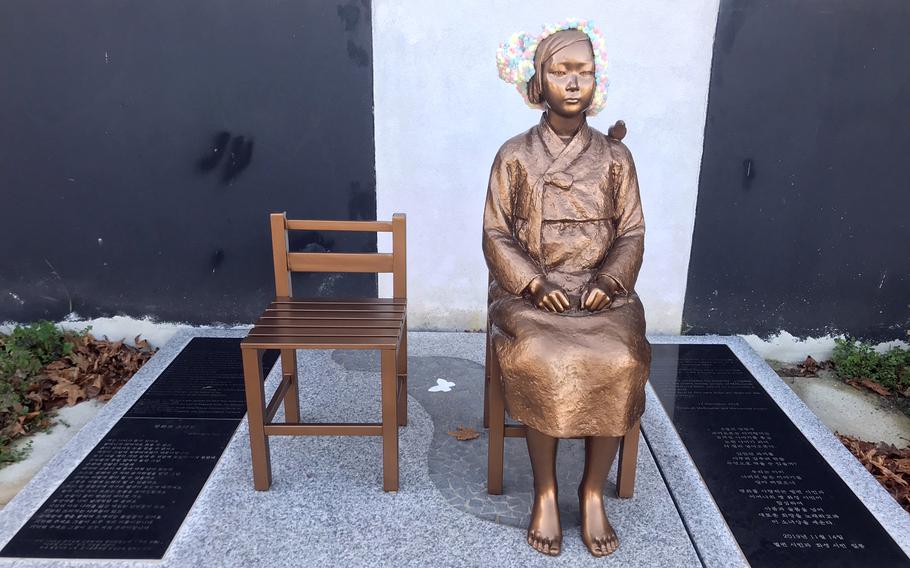 Statues of Peace have been erected in South Korea and other countries to honor the victims of sexual slavery, known euphemistically as comfort women, by the Japanese military during World War II. (Wikimedia Commons)

CAMP HUMPHREYS, South Korea – A plan to compensate South Korea’s wartime labor victims using money from a public foundation is being considered by Seoul’s Ministry of Foreign Affairs, according to a Yonhap News report published Thursday.

During a public forum at the National Assembly in Seoul on Thursday, Director-General for Asian and Pacific Affairs Seo Min-jung reportedly said individuals forced to work for Japan during World War II could be compensated by a third-party, rather than Japanese companies that benefited from their labor.

Seo said the Foundation for Victims of Forced Mobilization by Imperial Japan, a South Korean group funded by donations from domestic businesses, was a possible third-party candidate for the plan, according to Yonhap.

The foundation was established in 2014 to support the victims by bringing awareness to the wartime atrocities and providing financial assistance to the victims, according to its website. Roughly 1,815 forced labor victims were still living in 2022, according to a Korea JoongAng Daily report published Thursday.

Seo reportedly added that the plan has not been finalized and that it was predicated by Japanese companies’ reluctance to pay reparations for the victims.

South Korea should not be paying for reparations, said Democratic Party spokeswoman Lim Oh-Kyung in a statement on Thursday. She urged the ministry to withdraw its proposal and to “stop submissive diplomacy immediately.”

Japan's colonization of Korea lasted from 1910 to 1945. Around 53,000 people living in Korea were forcibly mobilized to support Japan’s military during WWII, according to the foundation.

Reparations for South Korean wartime victims have caused diplomatic rows between Seoul and Tokyo for decades. Japan’s Foreign Affairs Ministry maintains that wartime labor issues with South Korea were “settled completely and finally” following a 1965 treaty that normalized relations between the two countries and saw $300 million in grants and up to $200 million in loans for Seoul.

South Korean President Yoon Suk Yeol has vowed to mend ties with Japan, and work with Tokyo to deter threats from North Korea.

"We have been rapidly restoring and developing ties with Japan, which was the worst relationship ever,” Yoon said during a speech in August.